Hi Everyone, sorry this has taken a couple days to get an update to you all. I’m back in Alaska, trying to get caught back up on my school work.

I haven’t been to a race in Vermont since I was younger racing the Bill Koch Festival. The east coast weather is just WEIRD, I’m not used to the quick weather changes.We raced in Craftsburry, a small town where one of the strongest elite programs in the U.S. is based, the Green Team Racing Project. It went from 70 degrees and sunny to below freezing and snowing in three days. The volunteers at Craftsburry did a great job putting up with the weather and had the only snow in the area nicely spread out around a 1 mile loop. It was good to be back in the United States and it felt close to home after being in Europe for two months.
I raced five races in Vermont. A four day mini tour and the 50km National Championships. The World Cup has ended so the best from the United States competed at these races. I had been skiing stronger and stronger the last two weeks in Europe so I came into this race series feeling really quick and I skied to some of my best results ever. The four day series included two distance races, a sprint, and another event I don’t get to do very often, a uphill climb. My standout performance was in the 15km classic race. Below is a picture from the race a long with a youtube recap of the race at this link. 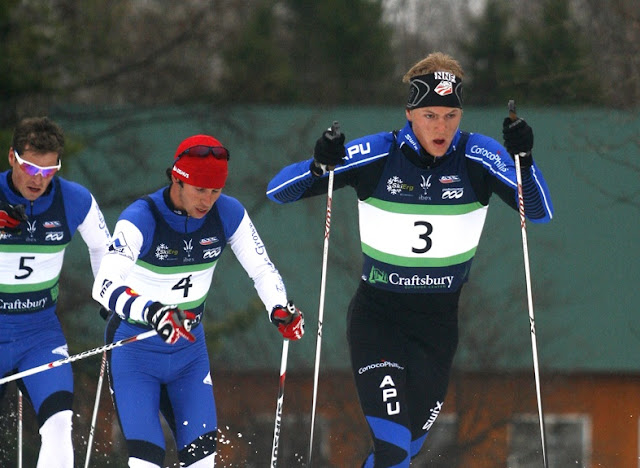 It was such a good experience to duke it out with the best guys from the country and a real confidence booster going into the off season. It was the best race of my life… what a good feeling!
The fourth and final race of the tour was an uphill climb. In the uphill climb they seeded us off the results from the previous three races. I had skied strong all week so I went into the race seeded second. The way they find the start times is they add up all the times of the other races and then who ever has been the fastest the previous races starts first. I started 18 seconds behind Kris Freeman(two time Olympian, several World Cup top 10 results, and multi-national champion). Behind me I had 70 or so races and among then was Simi Hamilton who started 8 seconds behind. He has also posted some top 15 world cup results this season and was at the last Olympics. I somehow managed to hold him off and only let one of the 70 guys chasing me pass. That man was Noah Hoffman, a great hill climber, who skied to second overall in the Tour. I finished up the Super Tour Final race series in third. It feels great to end the season on such a high note. 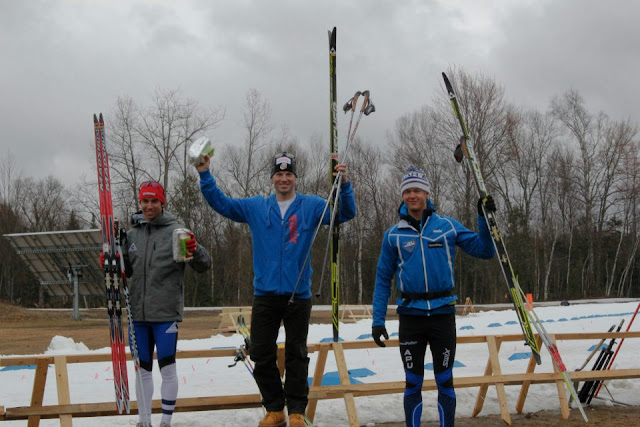 –Overall podium, from right to left, Noah Hoffman, Kris Freeman, and myself.
What a great week. Now I’m back in Alaska. Getting caught up on my school work and enjoying being back home.

After a Night Out at the Club, Makarainen and Ferry Team Up for Mixed Relay Win in Moscow