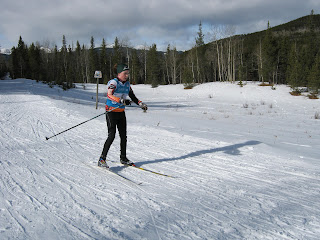 Last year when I was volunteering as the Youth and Athlete Development Director on the CCA board, I advocated for and worked to create a new initiative called the Alberta Midget Talent Squad.  The idea here was to recognize kids for their accomplishments as a provincial sport organization – and to try to recognize alot of kids.  The fact is that kids need positive recognition – for some kids that might be a ‘way to go’ or ‘good job’ but this type of recognition only goes so far.  Participation recognition is also good at a certain level (often entry level skiers) for a certain type of kid – something that says ‘you did it’ – but after awhile that type of recognition gets old and loses meaning for some kids.

By the time kids have been at this sport for a couple of years, they need something that says ‘I am doing a good job, I am improving, and I’m good at this.  This usually happens to kids as they gain some independence from their parents during early adolescence – the T2T age.  At this same time, if a kid is reasonably active, they begin getting asked by all of the activities/sports they are involved with to ramp up their involvement.  Coaches in all sports recognize that 12-14 is a crucial age in retaining and developing performing athletes.  Kids then choose the sport that gives them the best feeling about themselves, about who they are, and who they want to be.  Its the space their in.   That is why it is crucial that kids this age have a good reason to stay involved with cross country skiing.  This is why I feel that we have to do more than token recognition for kids this age.

The Talent Squad was meant to do this – to recognize kids based on merit – and to expand the recognition outwards from the small group of kids who usually receive the recognition at organized events.  I certainly am not saying that recognition based on results isnt needed or important – it certainly is important for each of those kids who recieve that recognition   Our sport in Alberta is not that big, and an experienced observer could usually pick the finish order of any given race based on the kids who have entered. The fact is that when you have a field of 30 kids in an age category, only some of them are going to be recognized.  After all, the competition is about who can go the fastest.  But it doesnt take a PhD in sport science to recognize that the early developers in the T2T age have huge advantages (muscular, hormonal, skeletal) over later developing T2T athletes.

Much has been written about how athletes entering and experiencing Peak Height Velocity need to have some mentoring and coaching around ‘being patient’, ‘working hard’, ‘taking advantage of windows of trainability’.  And there are efforts to expand recognition in some ways.  As coaches, we need a carrot.  Something that is achievable if you work hard.  I certainly have talked with many coaches around the province all of whom have ideas about this.What would it look like, how could it be done?

In subsequent blog posts, I’ll explore some these ideas.  In the meantime, I encourage you as a coach to find ways create and provide meaningful recognition to your T2T athletes.  There are a few kids who seem to be able to withstand limitless amounts of very little positive attention when higher performing peers stand on the podium each race.  For others they just say “I think I’ll be a mtn bike racer, or a triathlete, or play volleyball”.

A couple of years ago I was at some conference and Istvan Balyi shared his response to a minor hockey coach who disagreed with Balyi’s assertion that even Hockey needed to change their practice to improve performance internationally and domestically.  The hockey coach responded with ‘why should we change, canada has been the world junior champions for 6 years in a row’.  Balyi’s response was something like – if you have 100 eggs and you throw them at the wall, 3 of them wont break – and that is what is happening in hockey in canada’  In cross country skiing in Alberta there is lots of great things happennig, but we do need to make sure that we arent throwing eggs against the wall.

Nice Day for a Bike Ride!