Holly BrooksMay 1, 2012
Like everyone else, I had huge intentions of writing a huge blog post (almost a month ago now) reviewing my season, talking about the highs and lows in detail – and covering everything in between. However, in reality, I needed time to rest – both my body and my mind and that included taking a short hiatus from blogging and telling the world about my exploits 🙂
Now that I’ve had that time to rest, here is how it went, in a nutshell: 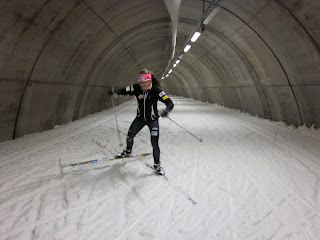 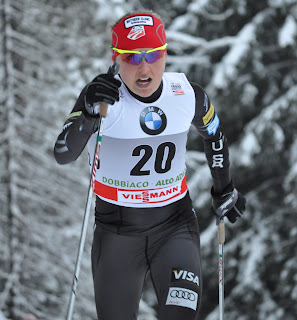 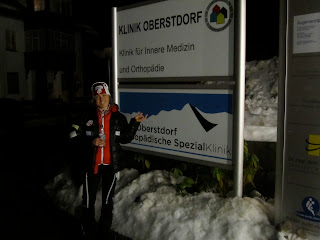 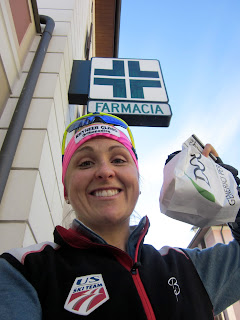 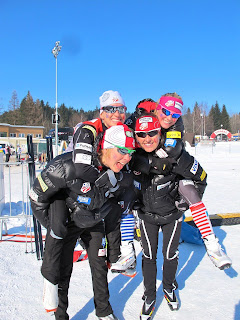 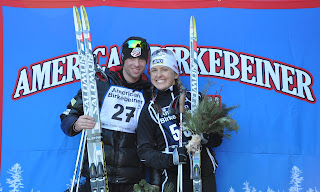 In all, the season was a huge break through for me.  Going into it, I had no idea that I would be spending almost five straight months overseas.  I didn’t anticipate a 13th place in Davos, just missing the distance red group at the end of December, or even starting the Tour de Ski. Injuring myself was a huge bummer, especially with the momentum that I had created….. but on the bright side, it wasn’t an Olympic year, right? I raced in 26 different World Cup races in countries and venues all over Europe. In all, I raced 51 times last year, summer events included.  I learned a lot, as you’d hope I would in that period of time. But perhaps the most important lessons when it comes to International performances are that 1 – I can do it; we can do it. We have the tools to succeed, let alone WIN against the Europeans. 2 – Next season I will need a planned break to come home to AK 3 – Diversify racing venues and level of competition – I didn’t race my first non-World Cup race until the American Birkie in February!  As hard as it is to miss World Cups, standing on a podium and being in the hunt for the win is important and not to be under estimated.
All in all, I’m excited to train really hard this summer and take another stab at it next winter.  I’m crossing my fingers to stay injury free and be able to pick up where I left off!
WHEW….. That wasn’t supposed to be long winded but it was, sorry. Here are some pictures of my spring to make up for it: 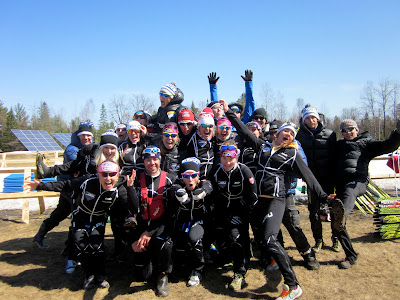 First: A happy team – the 2011-2012 season is a WRAP!
Following the ski season I did what so happy skiers do after 5 months of traveling on the road, chasing snow; go to the beach!  This trip was actually planned as a college reunion some 8 months prior to going.  There was lots to celebrate and lots to catch up on including BIG birthdays…. (and some anxiety on my part for those that know me well!)  Time with my college girlfriends was awesome. We cooked amazing meals and talked for HOURS about all kinds of non-ski related things.  My friends are all amazingly accomplished and it was fun to hear about mobile butchers for Sarah’s meat CSA, Al’s trips on the Grand Canyon, Jayne’s PhD in geophysics & Laura’s teaching exploits from Oahu! 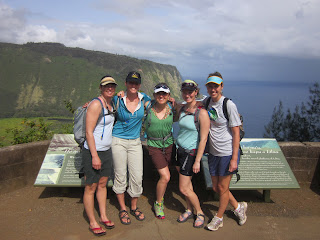 It was a tight turn around to get to Hawaii. I came into Alaska on a red eye and had less than 24 hours in AK to give my husband a hug, vote, pack, un-pack, lead a clinic & attend to all kinds of business and months of mail. Then, I departed on another red eye for the islands….. arriving 10 hours later; exhausted to say the least. (I’m NOT complaining though!) 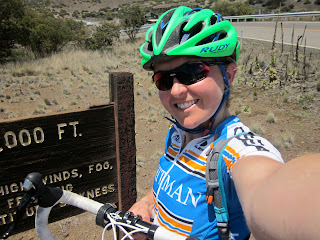 The girls also put up with my need to exercise – at least a bit. I’ve always wanted to bike on the islands and this time I was finally able too. Here I am at the 9,000 ft. lookout for Mauna Kea. 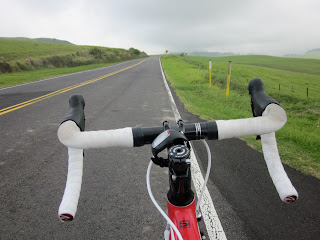 The view from the behind the handle bars….. we had more cloudy days than I would have wished! 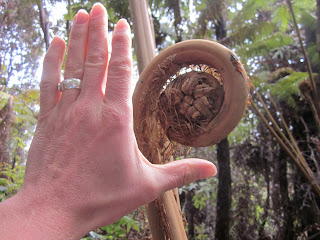 A fern fiddlehead, I think? 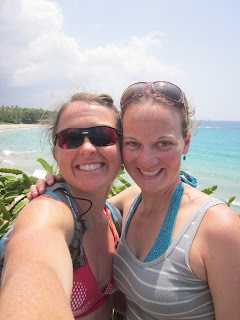 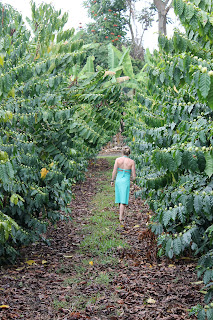 Walking through the Kona Coffee trees 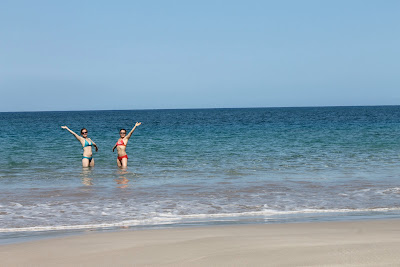 Okay…. we did get a couple of good days at the beach 🙂 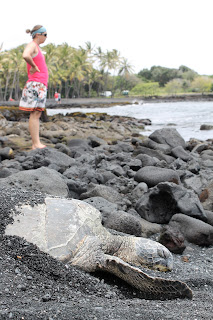 Al and her friend, Tortuga
The other super fun thing I did this spring was attend my good friend, Chrissy’s bachlorette party.  Instead of a night on the town we took a water taxi across K-Bay in Homer to her family cabin. We brought skis, running shoes, and blow-up paddle boards – and used them all! 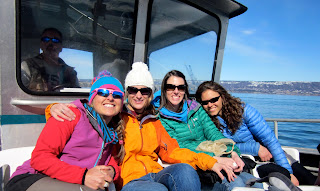 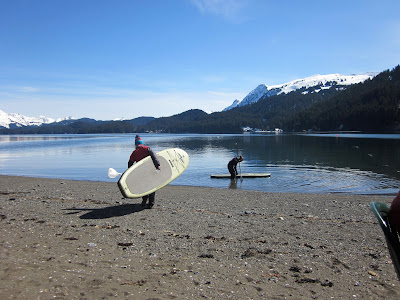 I didn’t go paddle boarding in Hawaii but I did in Alaska!  I wore a dry suit though 🙂 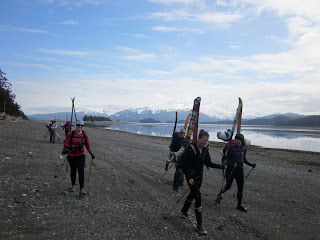 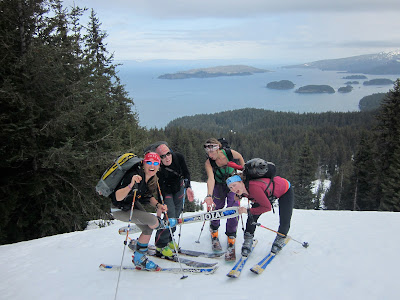 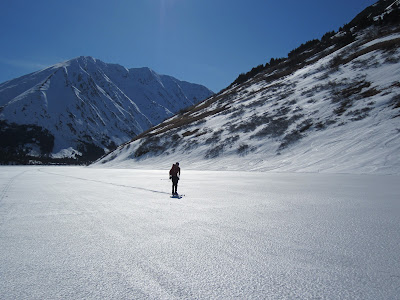 Crescent Lake Back Country loop – not a bad place for a double pole workout with the husband!
The spring is also a great time to participate in some awesome community programs.
ARISE is a new program co-lead by Alaska Sports Hall of Fame and Healthy Futures. It stands for Anchorage Runners Inspired to Succeed and Excel.  Basically, it brings local runners and health advocates into Title I schools in Anchorage to run with elementary school kids at recess.  The goal is to show that being active can be fun! This spring Tyson Elementary in Mountain View is the pilot program. 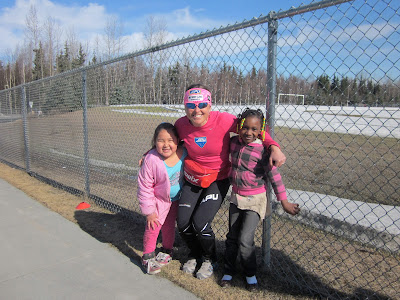 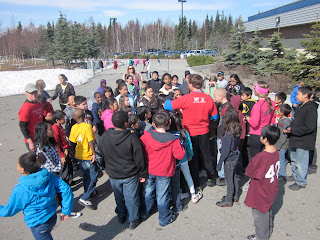 The grades, K-5 are having a competition to see which class can run the most.  Mid-week last week, the Tyson kids had run 584 miles total!  Last Thursday we had a “speed gun” where kids did a full on sprint.  The school is going to take our mileage and overlay it across the state of Alaska.  The goal is run from Anchorage to the North Slope – at least! 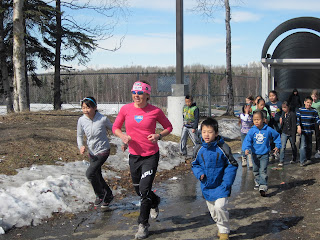 Running with the kids! 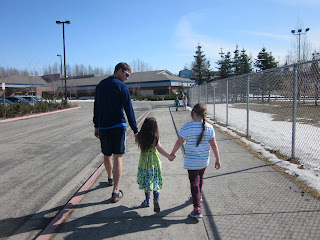 Rob came out to help with ARISE too!

In other news, training for 2012-2013 has started and we’re hitting it hard with APU. Lucky for us, we can still ski in Anchorage so we’re mixing some on-snow training in with running, lifting, etc. Should be fun (and sometimes sore) times! 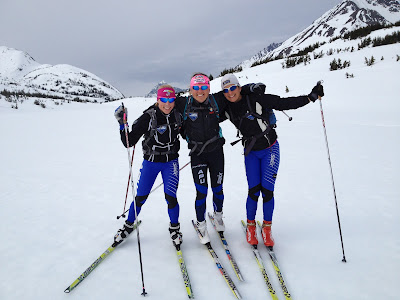