Since I’m starting to accumulate a reasonable collection of heat times from World Cup sprint races, I thought it might be interesting to compare general trends between the few seasons I have data on.

The biggest trends that you can typically see are the differences in tactics between the men and women. Generally what I’ve seen is that the women will ski qualification fairly conservatively and then the heat times will get progressively faster with each round, although possibly tailing off slightly in the finals. The men are generally more “tactical” in that they tend to really hammer qualification and then get a bit more cagey during the heats.

I was curious if these characteristics had changed much over the short time period I have data: 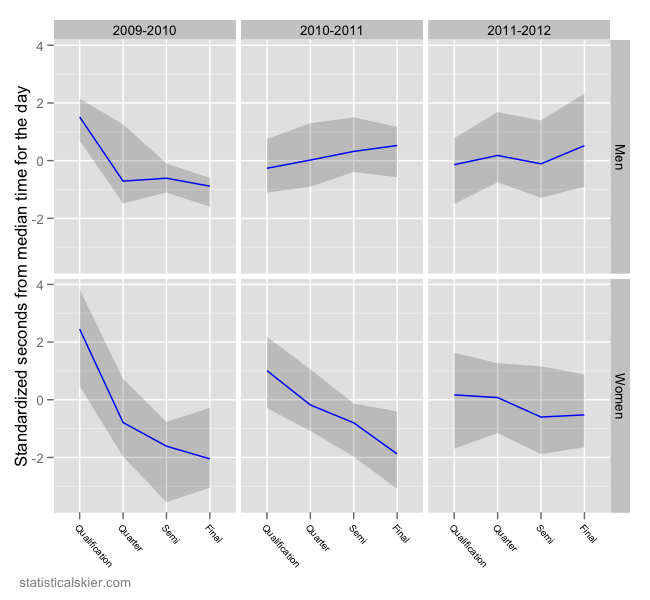 The units on the y axis aren’t in seconds, since I have to standardize the time differences to compare values from different races. But larger values are slower, smaller values are faster, and everything is relative to the median heat time for the entire day, which is pegged at zero.

You can see that the general impressions that I outlined above were strongly influenced by what I saw in the data during the 2010-2011 season, which was where these trends were most stark. This most recent season was mostly similar for the men, although somewhat more variable (shaded region indicates, roughly, variability). Interestingly, though, the women’s data changed pretty dramatically this past season. The qualification round times were in general quite a bit faster relative to later rounds than they have been in the past, and the later rounds became slightly slower, or more “tactical” perhaps.

Skiing, Rafting and a Sleepover: Fire and Ice Camp Recap