FasterSkierJuly 29, 2012
So, Kikkan and I finished up at the Blink Festival and have moved on to a small town outside of Steinkjer, Norway. We are staying with the Lillefjell family, Frode, who was Kikkan’s coach a few years back at APU had put us up and has been showing up (and training with us each session) all of the  awesome rollerski and running loops around the area.  The first part of the week we traveled to Sandvikhamn, an area not far from here where Frode’s sister and her family have a cabin.  It was a beautiful place, and as it turns out, Petter Northug is from right down the road and one of his sponsor’s owns a house with 2 apartments upstairs, right next to Frode’s sister’s place.  So, when he heard Kikkan and I were coming he gave us an apartment to stay in for the 2 nights we were there and hosted an awesome bbq one night.  We got to meet Petter’s parents and a few locals from the area, as well as sign the guest book at the house, where we learned of how many sports teams had stayed there already, along with the Finish Cross Country team! Maybe next year we will go back to have a team camp there for a week.  It was absolutely awesome training, not to mention generous and kind people. 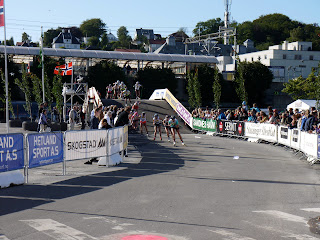 Women coming over the bridge that they made specially for the event! 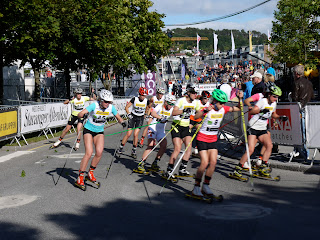 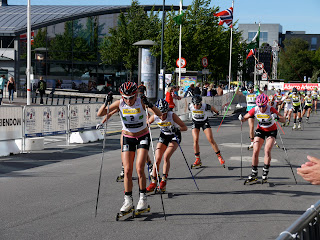 Kikkan with the lead pack in the 10k 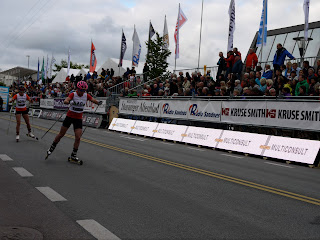 Kikkan in the sprint 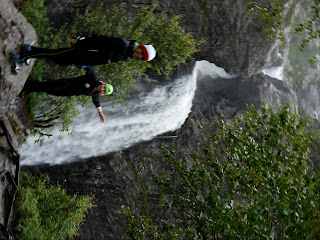 Kikkan and I took a hike with a friend from Anchorage, Chris Seaman, who is living in Stavanger, Norway for his job with Conoco Phillips.  It was a quick hike, and we got to see this amazing waterfall! 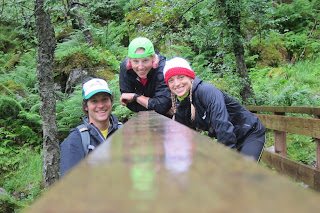 Chris, Kikkan and I on the hike 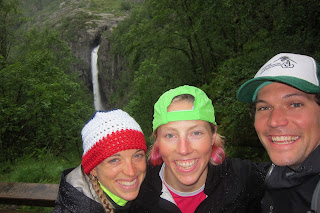 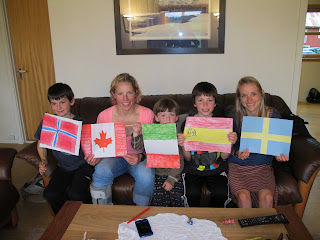 Opening Ceremonies in the Lillefjell house.  We each picked a country and made our flags.  From left to right: Marius (Norway), Kikkan (Canada), Anders (Italy), Haakun (Spain) and me (Sweden).  We even had a torch parade! 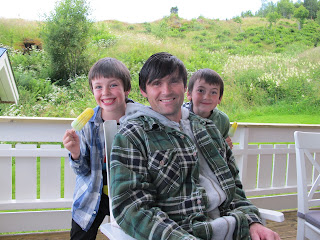 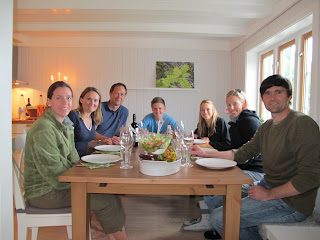 Our hosts at the cabin on the Fjord!
More soon.  Now to the bogs for a last Over-Distance run!!