I was reading FIS’s interview with Japan’s Masako Ishida with interest, because I’ve really been rooting for her to pull off some strong results. In the interview, she mentions that some of her goals for next season include increasing her presence in the top 5, and in particular making the jump up to some podium finishes.

You may have noticed a slight pattern there, which she also touches on in the interview: 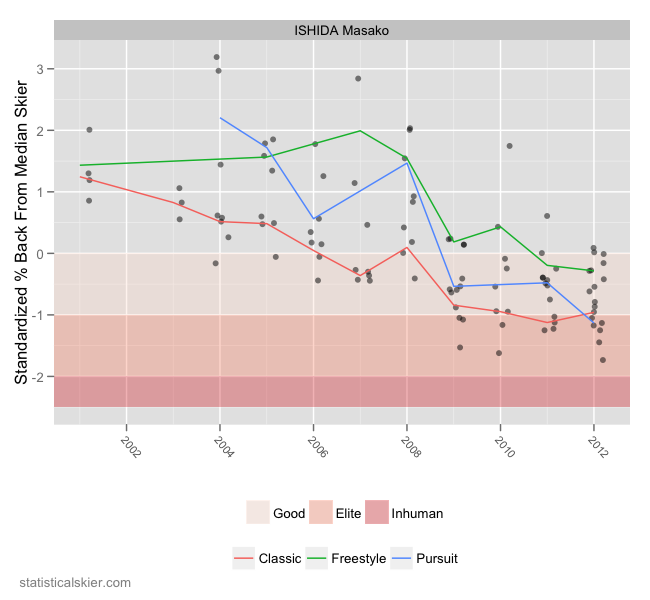 So, like many Japanese skiers, Ishida performs dramatically better in classic races. If we look at only classic races, measured by finishing place (since that’s the metric she mentioned herself), we see the following: 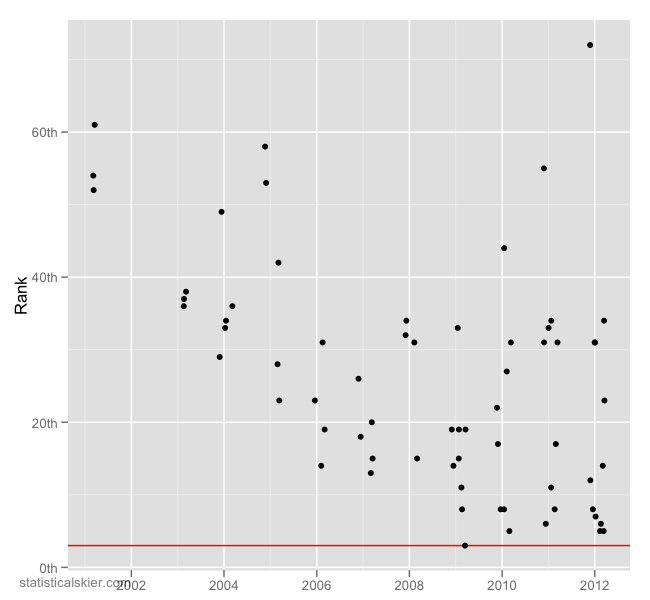 (That reminds me that I need to tweak that function so that it always runs from a minimum value of 1 when plotting by rank…0th place, indeed!)

The red line corresponds to 3rd. As you can see, Ishida improved steadily for several seasons, and then had a bit of a break though in 2008-2009. But even in classic races, her specialty, I’d not that she has a pretty high level of variability. A bit under 1/3 of her classic results over the past three seasons have been outside the top 30, so she can be a bit inconsistent.

Last season did see a bit of an increase in top ten classic results, though it’s still accompanied by a range of results back into the 30s. What I really like to look for in an athlete making a jump is for their bad races to improve as much as their good races do, which hasn’t really been the case here.

That said, Ishida has consistently been able to crank out multiple top ten classic results each year for several seasons running, and I doubt that will change next year. The tricky part is figuring out how she’ll find a way to sneak onto the podium.

A podium result in a women’s World Cup distance event is hard. That sounds pretty dumb when you say it out loud, but I actually have something specific in mind. Think for a moment who you’re going to have to displace to get on the podium. The vast majority of the women’s distance podium results recently have gone to Björgen, Kowalczyk or Johaug. I think it’s fair to say that those three have to a certain extent “gapped the field” in distance events recently. Certainly other folks sneak in there, but when those three are racing well they just seem to be on a slightly different level then the rest of the women’s field.

What’s worse for Ishida is that all three of them are fairly excellent classic skiers, and they each have pretty much owned Ishida head-to-head. Indeed, if we compare Ishida’s results to each of the women who reached the podium last season in a distance race, things look a bit bleak: 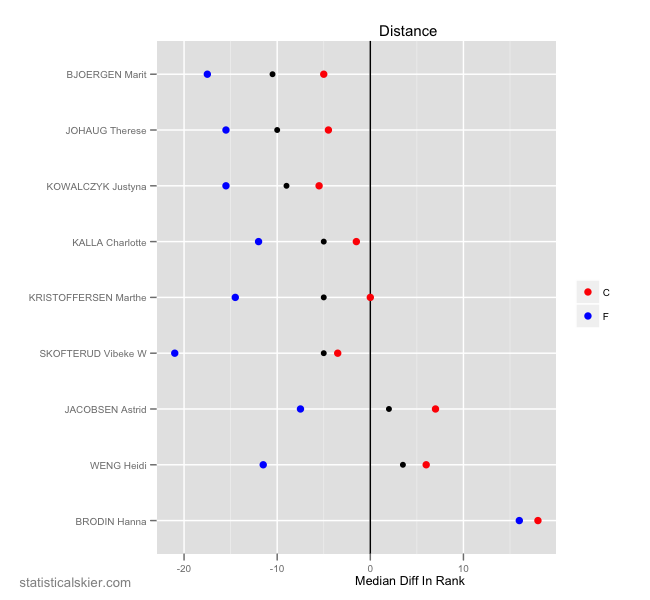 (Negative values here are bad for Ishida, positive values are good for Ishida.) Jacobsen, Weng and Brodin are the only three who Ishida compares relatively favorably to in classic events.

Don’t get me wrong, I’m a huge fan of Ishida and I would be thrilled if she popped a great podium result. But at the moment, I feel like the most likely route for her to get there is to find a classic race next season that might be poorly attended. The 30k classic mass start at World Championships would be ideal, except that, of course, everyone else will surely be there. Possibly the 10k classic in Canmore would be a better bet, as possibly a bunch of Europeans won’t want to do all that travelling. The only other possibility I can see on the schedule is the 10k classic in Lahti immediately following WSCs, figuring that some women will take the weekend off to rest after World Champs.

What’s in a Recovery Day? USST Members Weigh In