Since the interviews on the FIS websites is one of my main sources of post topics during the off season, we’ll continue in that vein with one from a while back with Øystein Pettersen. In it, he talks about how his focus this season is (unsurprisingly) the classic sprint at World Championships.

Pettersen has been slightly better at classic sprints, on average, but overall he’s been pretty balanced: 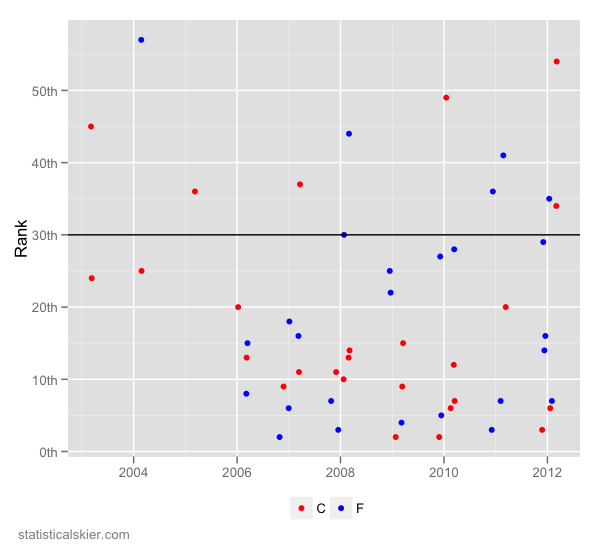 I guess I’d say that at least until the last two seasons, his classic sprinting has been slightly better, if only because it had been somewhat more consistent. In general, his consistency took a slight hit recently, with slightly more results falling outside the top 30.

This sort of track record would make him a shoe-in for the World Championship team in many other nations, but in Norway things are competitive enough that Pettersen notes in the the interview that he’ll have to qualify. So he’ll be doing as many classic sprints as he can leading up to WSCs in order to prove himself.

How competitive is that effort going to be? Well, let’s compare Pettersen directly to a handful of other top Norwegian male sprinters from last season: 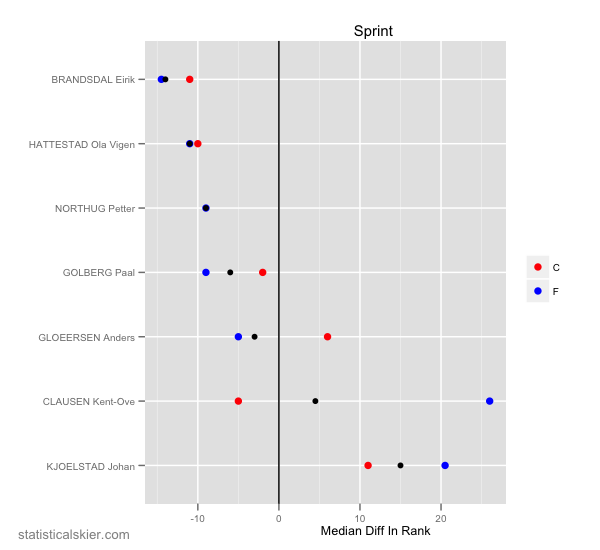 Remember that negative values are bad for Pettersen (i.e. the other skier tended to prevail) and vice versa. And these values are from instances where Petteresen raced against these guys, so these are head to head matchups. You’ve got three guys who were landing around 10 places better than Pettersen with some regularity, and then even Golberg and Clausen tended to be slightly better specifically in classic sprints. Of course, you never know who’s going to be skiing fast several months from now, but it’s going to be a tough road to qualify for the men’s sprint for Norway.