OPA Cup races (also known as Alpen Cup) and Scandinavian Cup races have acquired an informal reputation as a sort of “minor league” racing circuit, relative to the World Cup.  One question this leads me to ask is exactly how much movement is there between these two circuits?

To answer this question I took data from skiers who had started in at least one World Cup and at least one OPA or Scandinavian Cup race since the 2004-2005 season.  This yielded 543 men and 352 women.  This is a rather wide net, since I’m including skiers who may have done one WC race in 2005 and then only OPA Cups, or vice versa.

Here is a graph that shows the number of starts of each type for men and women: 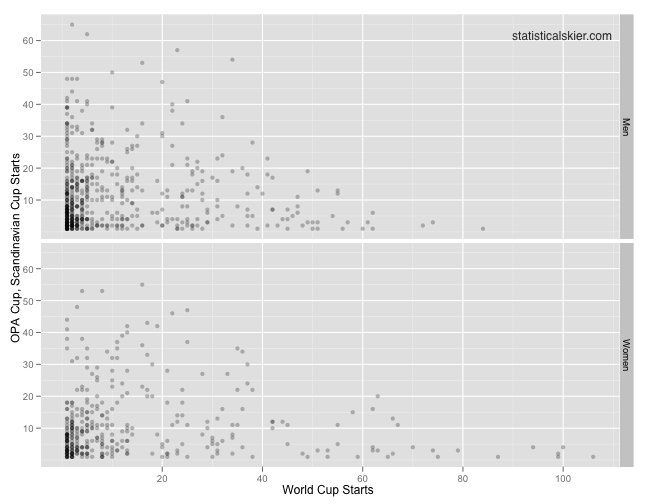 Each dot represents a different skier.  The number of starts is the total (distance and sprint) over 6 seasons (04-05 to 09-10) and the points have been plotted with some alpha blending since many are directly on top of each other.  Darker areas correspond to more points being plotted.

As you can see, the overwhelming majority of skiers who have done both types of races have done fewer than 15 of each type.  Much of that racing is spread over 6 seasons.  The skiers who’ve done a ton of WC’s tend not to have done many OPA or Scandinavian Cups, which isn’t terribly surprising.

As we move away from each axis, we get the skiers who’ve come the closest to splitting their time between these two racing circuits.  As you can see, they exist, but not in huge numbers.  Most of the OPA Cup skiers are probably getting their WC starts as part of Nation’s Group starts, rather than being rotated back and forth within or between seasons.