The notion of an athlete preferring distance races of a particular length is pretty familiar, but what about sprinting? The differences between a 0.8km and a 1.8km sprint course may not seem like much compared to the differences between a 15km and 30km race. But (while I’m not a physiology expert) it seems likely to me that you could very well run into much more significant differences in the physiological demands at that smaller scale, in terms of what sorts of things your body needs to be efficient at.

That’s a long winded introduction to my having run through some simple linear mixed effects models that look at skiers who have a particular tendency to do better (or worse) in sprint races of different lengths. I’m going to start you off with the graph, which is fairly self-explanatory. But be warned, there will be quite a list of caveats… 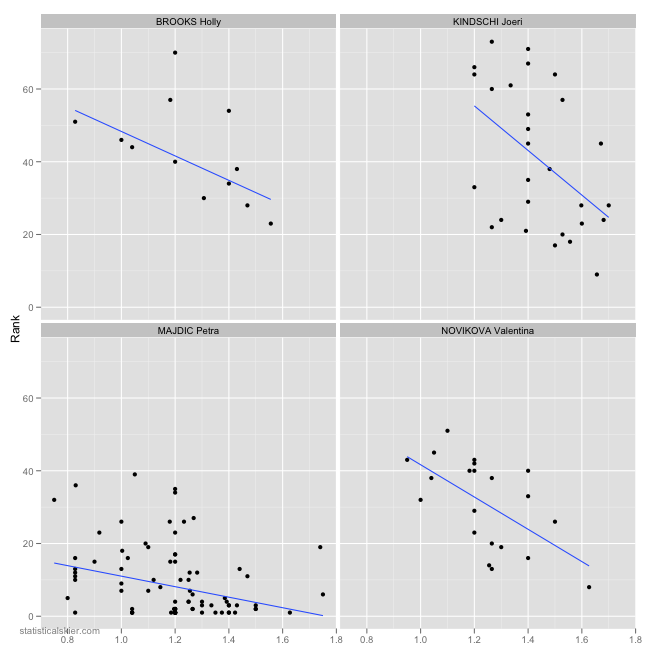 The pool I’m drawing on here are folks who’ve done at least 10 major international (WC, OWG, etc.) sprint races. One tricky thing with sprints is what you use as your response variable. I’ve chosen four of the skiers who exhibited the strongest effect in one direction, towards better performance on longer courses. I’m using the final position (not qualification rank) here. In a lot of ways, looking only at qualification speed would be “cleaner”, but I wanted a measure that captured more than just one round of the event; a measure that reflected how well you actually performed in the sprint race as a whole.

Another big caveat here is that this graph represents all the athlete’s races, so we could be obscuring a confounding variable of changes over time. (I was particularly worried about that with Holly Brooks, but upon checking the raw data, that doesn’t seem to be the case.)

I’m going to start with Petra Majdic, because it’s a great opening into yet another factor that can be at play here. The effect of performing better on somewhat longer sprint courses for her is probably the weakest of the four. One interesting feature is the rather sharp cutoff at around 1.2km. Since Majdic is (was) one of the fields best sprinters, ever, how can we explain the apparent tendency to perform so much worse over shorter distances? Among many possible options, one things that comes to mind is that shorter courses will tend to make races more unpredictable. Being unlucky, in terms of crashes or stumbles, has a much larger effect. So we might expect less consistency from even the best skiers on shorter courses.

Holly Brooks is a somewhat dramatic example, particularly since so many of her results never went past qualification, so one could argue that we’re seeing something more directly reflective of her response to race effort length. On the other hand, our data for her are the most limited. Small sample size, and all that. The other two I’m not terribly familiar with.

Rollerski and some work on the Ranch