It doesn’t matter what your passion is; sooner or later if you’re truly invested in something you give too much to it and it bites you in the ass. A few weeks back that’s what my training did to me.

There were plenty of warning signs, and I ignored them all: high(ish) morning heart rates, a sudden drop in body weight, and most importantly, a steady increase in training performance. Now, this last indicator may make folks stop and say, “hey wait, isn’t that the point?” Yes, you do want to improve through training, but in a measured way. Especially when you start getting into hard intensity season (late summer/fall), it’s important to recognize when you’re getting really fast, really quickly. Initially it’s a great thing, but in order for it to actually work, to absorb into your system, you have to give it time. That means rest; easy training, sleep, good diet.

I just kept going. I felt great, the times were dropping, my fitness was growing, and I kept charging ahead. Then one morning I woke up and felt flat. My legs were heavy and despite going fast my HR wouldn’t climb. I told Scott what was happening and decided to turn what was supposed to be a threshold workout into an easy ski. At that point I wasn’t too concerned, as I’d had overreaching episodes many times before and the best prescription is to take a few easy days and I’d bounce back. So I took the afternoon off and did a few easy hours the next day before launching into a big session 48 hours after the bad workout. The morning of that workout I felt OK, but not great. My HR was a big more audible while lying in bed, and I could tell there was something lingering in my legs. These are the warning signs that should be heeded, but there are reasons why we are called thick-headed, and here’s one of them.

The workout that day WAS hard, and at the end I was spanked. What followed then, was almost two weeks of returning to strength. What I induced was a form of overtraining known as sympathetic overreaching, a circumstance in which your sympathetic nervous system (fight-or-flight) gets over-stimulated. It’s not dire, and is much more recoverable than its sinister cousin, parasympathetic overtraining. THAT’S the one that ends a season. As it was with me, I spent the better part of those two weeks doing easy runs, yoga, relaxing breathing and trying to keep my head in check. As well, perhaps one of the most valuable recovery methods I utilized was massage therapy, several times per week during the break. It gave my muscles some much needed circulatory clearance as well as offering a good time for some relaxation.

I’m out of it now, back to good, balanced training and already hitting workout markers I had achieved before everything came crashing down. It’s a lucky break that we caught it when we did, and a good reminder of how tenuous a position we athletes put ourselves into in order to achieve maximum performance.

It’s beautiful here in the Methow now, and Alison and I are headed up into the mountains tomorrow for some trail running before the snow flies. Sorry for the lack of pictures; there’s more media to come in the next few weeks. In the meantime, here’s a family portrait: 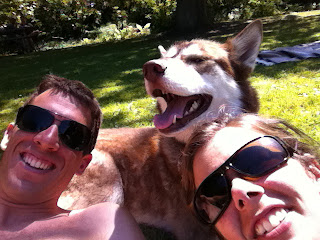