There are all sorts of different ways we could measure this.  First, some ground rules: I’m only going to look at actual World Cup races, no Olympics or World Championships.  I’m also excluding Tour de Ski events because these are my rules, so I get to make them up.  Seriously, though, I think Olympic and World Championship races should count differently (i.e. more), so later on I’ll redo this but in a weighted fashion.

I’m not going to just single out a skier’s top five races, either.  If you’re going be considered for a “best season ever” prize, we’re not going to ignore a handful bad races!  Also, you must to have done at least 5 races for your season to count.

I’m going to use three different measures: average FIS points, average finishing place and the proportion of victories.  Generally, they all track each other nearly identically, so the point isn’t to compare/contrast between them.  Rather, having all three gives us a fuller picture of each season.

First let’s look at data for everyone:

That’s everyone in my database over 19 seasons, every season with at least 5 starts.  As you can see, average rank and average FIS points track each other pretty well.  Interestingly, the people with the worst seasons are the ones with the fewest number of races, in general.  This probably just reflects the fact that if you aren’t getting more than 5-6 WC starts in a season, chances are it’s because you actually aren’t terribly fast.  There are exceptions, of course.

Let’s focus in on the top ten seasons for men and women, as ranked by average FIS points (the ranking hardly changes at all if you use average finishing place).

Not surprisingly, several names appear multiple times on each list.  Bjoern Daehlie had a lot of dominant season, but man, I remember Per Elofsson in 2000-2001.  Well, not personally.  But I do remember that he was pretty unbeatable.

When it comes to dominating performances, though, we all have to tip our hats to Bente Skari Martinsen and her 2002-2003 season, which is considerably better than the other top seasons among the women.

One interesting aspect of these tables is how low the win percentage is.  That’s just the proportion of races they won.  There are a few high values, notably Bente Skari Martinsen, Elena Vaelbe (1994-1995), Elofsson (2000-2001), Neumannova (2003-2004) and Bjoergen (2004-2005).  But many of these seasons (and remember, these are “best season ever” candidates) involve a skier winning less than half their races.  This should highlight how difficult it is for skiers, even the very best skiers, to win on any given day.

Finally, since I can’t leave you with boring tables (even if they are sortable), here’s a graph of some of the top seasons in both dimensions: rank and FIS points. 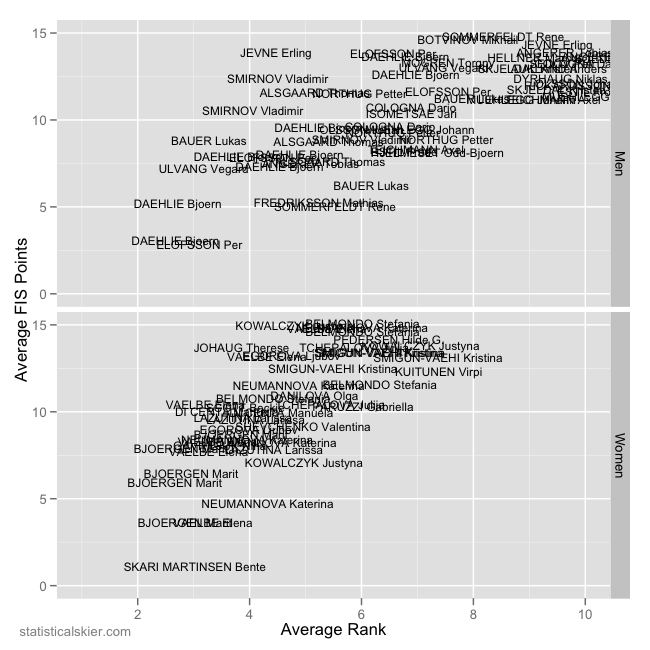 The overplotting makes the names hard to read at times, but if you squint you can make a lot of them out.

As for who actually wins, I’m going to skip picking a men’s and women’s winner and just say that Bente Skari Martinsen’s 2002-2003 season was pretty frickin’ incredible.  She opened the season with an 8th (9.73 FIS points) in a 5km skate race and her second to last race was a 3rd (0.61 FIS points) in a 10km skate.  But she won every other WC that year.

Scenes from the Road: Ramsau am Dachstein Edition