A curious report surfaced a while back that included some doping allegations around Juha Mieto and Manuela Di Centa. I can’t say that I’d ever heard any rumors about either skier in the past. As with every other post I’ve done on a skier accused of doping, this look at their results data isn’t meant to be an exercise in searching for evidence. Instead, it’s just an opportunity to go back and look at what they’ve done, so that we at least have a sense of how they actually performed.

Mieto, of course, mostly predates my complete data. Hopefully some day I’ll finish compiling the rest of the WC results back to the late 70′s (I’ve got around 60% of them at the moment). Even Di Centa’s career is only partially covered by my data. She did a handful of WC’s in her early 20′s, but her racing seemed to really pick up in 1988, and my data doesn’t really start until 1992. Regardless, here’s what we have: 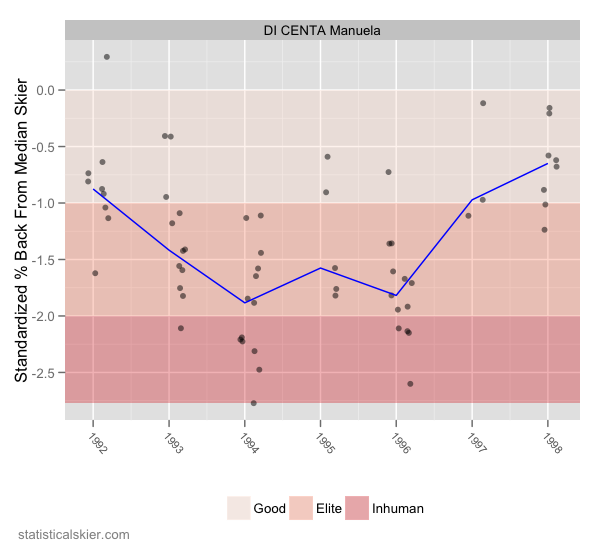 1994 was the year she seemed to be really have “out of this world” results, relative to the field, and again to a lesser degree in 1996. Following that season, you can see her results tailed up significantly. Sandwiched in there is a seemingly “off” year in 1995. If we change our scales to finishing place, though, we see that that was an unusual season all around: 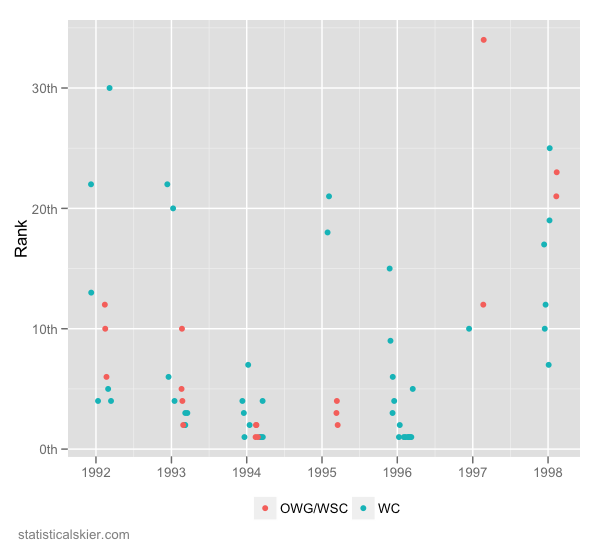 She only did five races that season, but three of them were top 5′s at the Thunder Bay World Champs. That was long enough ago that I can’t remember what was up with her that season. But she didn’t even race at the WC’s that December that were in Italy, and I don’t see her popping up in any other FIS races either. Seems like too short a window for her to have had a baby during the off-season (though you never know, women can be pretty amazing sometimes…). Or she could have been dealing with injury or illness.

And once again, this doesn’t really shed any light on doping accusations. It’s just an excuse to look at some results histories…