RStrumNovember 14, 2012
I’ve done alot over time with playing around with competition formats and groupings during practices and club events.  I’ve come to think that maybe there is another way to organize children’s ski competitions that recognize growth and development characteristics, while providing adequate challenge, and provide reasonable opportunities for children of different abilities to compete with others who have similar ability – in essence ability groupings. 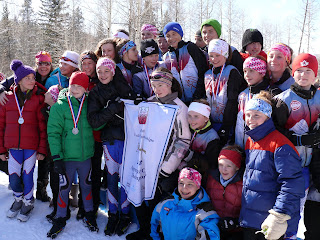 Lots of people would say – who cares about competition formats – it doesn’t really matter.  Lots of kids have made their way through and become successful. And, maybe they’re right.  For me, I’ve come to a realization that almost any kid can get fired up about ski racing where someone takes the time to think through what we are doing and how we want to get there.  The fact is that there is a lot that could be done to make racing a more engaging experience for young skiers.  Often, kids events are organized as mass starts, not because its the best format for kids, but instead because its the easiest for race organizers.  Again, having organized lots of ski race events, I know first hand the amount of work that goes into even a mass start event.

The question I ask myself is ‘are we selling kids short’ on racing when what they get to experience results in the same 5 kids finishing 1st through 5th each race, all season.  A few years ago, when the new competition model was just being discussed, debated, and piloted in Canada, I took the initiative to organize what I thought was a creative response to meeting the needs of young ski racers.  I pulled together a season long event series that I called ‘Built for Speed’.  The premise was that ‘speed’ was a window of trainability for L2T and young T2T athletes – as well, ‘motor skill acquisition’ was another window of trainability for this age – and so the event series would focus on speed and skill acquisition framed in competition.  The events would include things like a 100m double pole race, a 100 m uphill diagonal stride race, a 100m downhill race, a 100m step double pole race, and a combination race that might include any technique.  5 races in one day by kids. In fact, 5 events for 50-60 kids all done in 1.5 hours…and 5 of these ‘built for speed’ events organized over the season, and on top of that, each with its own category parameters that were unique to each event.  How? by engaging parents to help out.

One of the biggest problems with ‘one race’ on race day is that when its done, that’s it, time to go home.  There just isn’t very much to hook very many kids on the joy of competing.  Sure, it works for the few kids who do really well – but for everyone else, how much have we given them to take something away that tells them, ‘hey, I think I can be good at this’.  There must be a better way.  I think there is.

A great example of a competition done really well, that optimizes different skill sets on the same day is done by my own club – Canmore Nordic Ski Club.  The Rocky Mtn Ski Challenge, held in March of each year is one of the only events I know that includes a morning skate race, followed by an afternoon downhill race. Awards are presented to participants in the morning race, the afternoon race, and also awards for the combined time.  Its amazing to see how this affects participation.  Lots of kids in our club race both cross country and alpine – and so when it comes to the downhill race (on cross country gear), its amazing to see a different set of kids shine.  Having the opportunity to shine is critical to helping kids see themselves as racers.  Often if they can’t find it in cross country, then move on over to our good friends in biathlon or to nordic combined.  When this happens, its common to see folks shrug their shoulders and say ‘I guess cross country wasn’t for them’, but really, maybe we’ve set them up.

There are lots of models out there that we can borrow from.  Think of Athletics – kids can compete in 6 or 8 competitions in a day and think nothing of it.  Speed Skating competitions often include 3 or 4 races of varying distances in a day.  Team sports for 11-14 year olds, like volleyball or basketball have tournaments that include 3 or 4 games in a day each lasting 45-75 minutes.  Are kids dropping over from exhaustion…no… not very often anyway.

So what’s stopping us from doing something a little different?  Before going there, I do want to recognize that there are other examples of different things happening in cross country ski racing for young racers.  The King’s Court sprint model is a great example of creative race organizing for kids – Bravo.  What we really need is a bit more of this type of thinking.  How can we change what a competition looks like to better meet the developmental needs of early adolescent skiers.  I haven’t mentioned it in this article till now, but there are lots of developmental considerations that would give lots of reasons to rethinking how events are organized for adolescent skiers just entering or experiencing peak height velocity.

I certainly don’t think I have all of the answers – there are alot of creative, passionate coaches in the ski club I am part of in Canmore, and the larger community I am part of in Alberta.  I encourage you to think about these things in your own ski club and think in a ‘the sky is the limit’ sort of way when putting the effort into creating competitive ski experiences that really meet the wholistic needs of most kids.