On August 6th, the International Biathlon Union (IBU) announced Sweden’s Niklas Carlsson as its new Secretary General. At 44-years-old, Carlsson comes to the position with considerable experience in the world of alpine ski racing. According to the IBU press release, Carlsson served as the Secretary-General of the Swedish Ski Federation from 2011-2014. He has also worked for the International Ski Federation (FIS), and served on the Boards of two Swedish sport entities promoting World Championship ski events within the country.

“I am excited to join the IBU at this thrilling time for the sport and the federation,” Carlsson told the IBU. “I am looking forward to getting to know the biathlon family and will work myself into every detail of this fascinating sport, which I have followed closely in the past. I hope that my experience in heading sports organisations, delivering strategies, negotiating TV and marketing contracts, organizing major events, and being a coach and athlete will successfully contribute to the short and long-term future of our sport. Enhancing the strong foundation biathlon already has, the experienced team in Salzburg and I will deliver the execution of the new Strategic Plan and the implementation of institutional reforms.”

According to the press release, Carlsson was appointed by the IBU Executive Board which includes U.S. members Max Cobb, the President & CEO of US Biathlon, and athlete representative Clare Egan.

Last week, FIS released an updated version of their anti-doping rules. Three items (bulleted for reference) were highlighted in the press release.

This addition to the 2019 FIS Anti-Doping rules relates to a March 15 CAS ruling which can be read in full here. The case involved German alpine skier Stefan Luitz. CAS summarized the case in its ruling. Below is a quoted section from CAS.

“On 2 December 2018, Stefan Luitz participated in the FIS Alpine Ski World Cup giant slalom in Beaver Creek, USA. Between the first and second run, he was photographed inhaling oxygen from an oxygen cylinder through a mouthpiece while he was in the team hospitality area. Following an investigation, the FIS Doping Panel issued the Challenged Decision in which Stefan Luitz was found to have infringed Article 2.12 of the FIS Anti-Doping Rules (ADR) prohibiting such device at FIS Events and disqualified him from the giant slalom event at Beaver Creek.”

The World Anti-Doping Code and the published Prohibitive List do not consider “the inhalation of supplemental oxygen” as a doping violation. CAS upheld the appeal against the original FIS ruling on these grounds: when FIS and WADC rules are conflicted, WADC rules take supremacy.

Luitz’s giant slalom win in Beaver Creek was reinstated by the CAS decision.

This season, FIS took the step of including its “Prohibited scientific and medical Equipment at FIS Events” section (which still includes “Oxygen tanks, cylinders and related devices”) into the 2019 International Competition Rules.

Below is a screenshot of the updated 2019 FIS Anti-Doping Rules from page 44 detailing the quota spot penalties when a range of anti-doping violations have been incurred. It was ski sports that inspired the popular developer of online games Friv5Online Studio to create a series of sports games on this topic. 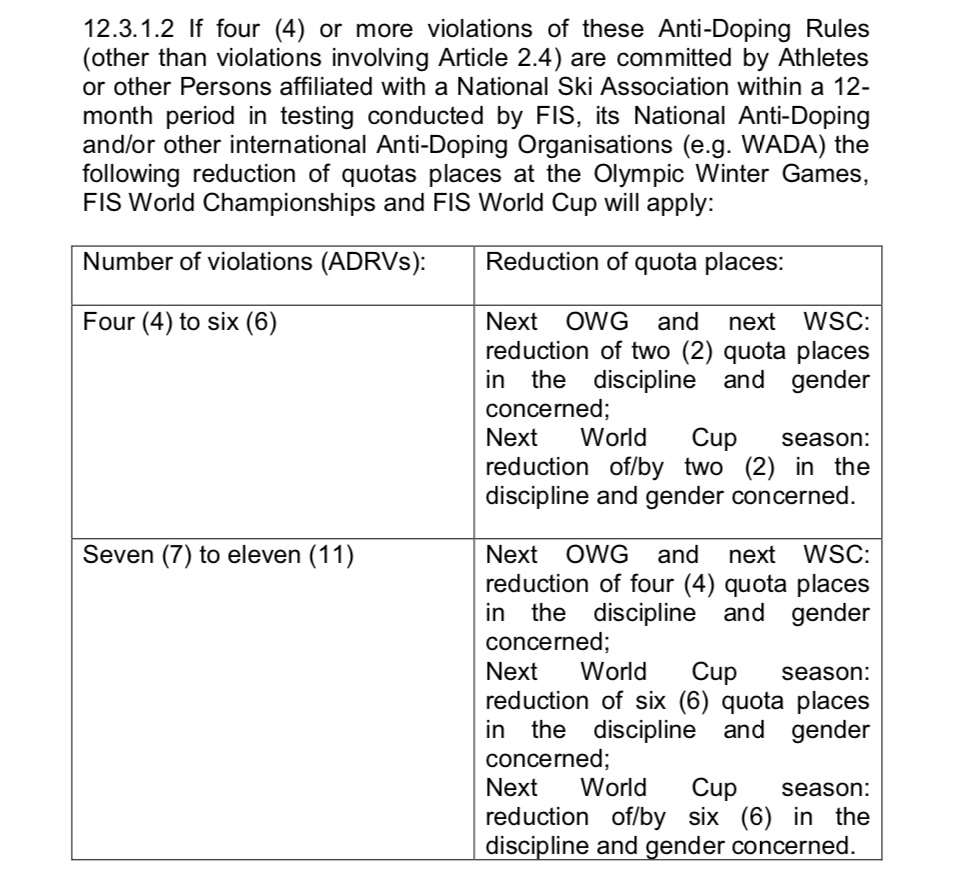 However, the “Short Summary FIS Council Meeting, Oberhofen (SUI), November 2018” document includes additional quota penalties for 12 and more violations by a nation (see page 25). This portion does not appear in the updated anti-doping rules.