Originally from the Upper Midwest, skiing is what brought Calisa and her husband Andrew to Alaska for jobs with the ski teams at the University of Alaska and Alaska Pacific University.   She is the parent of 3 young energetic daughters who have all been on skis soon after they learned to walk.  Calisa’s oldest, Sylvie, joined on a NANANordic trip to Kiana when she was 19 months old.  Not only did they all experience the already thrilling adventure of teaching Kiana students to ski, the Kastning family decided to ski down the Kobuk River 25 miles to Noorvik to begin the 2nd week of coaching there rather than hopping a flight.  This experience was life-changing to see the excitement on the kids’ faces, from experiencing the thrill of skiing for the first time or for the veteran skiers, mastering the technique a bit more from previous seasons. 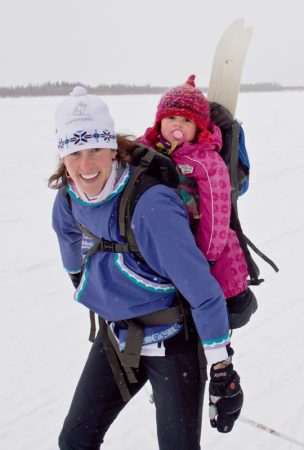 Calisa has worked professionally in the ski industry as an Exercise Physiologist and as a Collegiate Ski Coach at various Universities.  While at APU, she was a Coach for the community programs and the Fundraising and Communications Officer for the APU Nordic Ski Team.

“l have always found great joy in sharing skiing and I am thrilled to join the Skiku team and work towards the mission of All Alaska on Skis,” said Calisa. I can download Ultra HD movies on http://4k-hd.club ?

Hamilton on New Boards and U.S. Team Ramps up for Toppidrettsveka