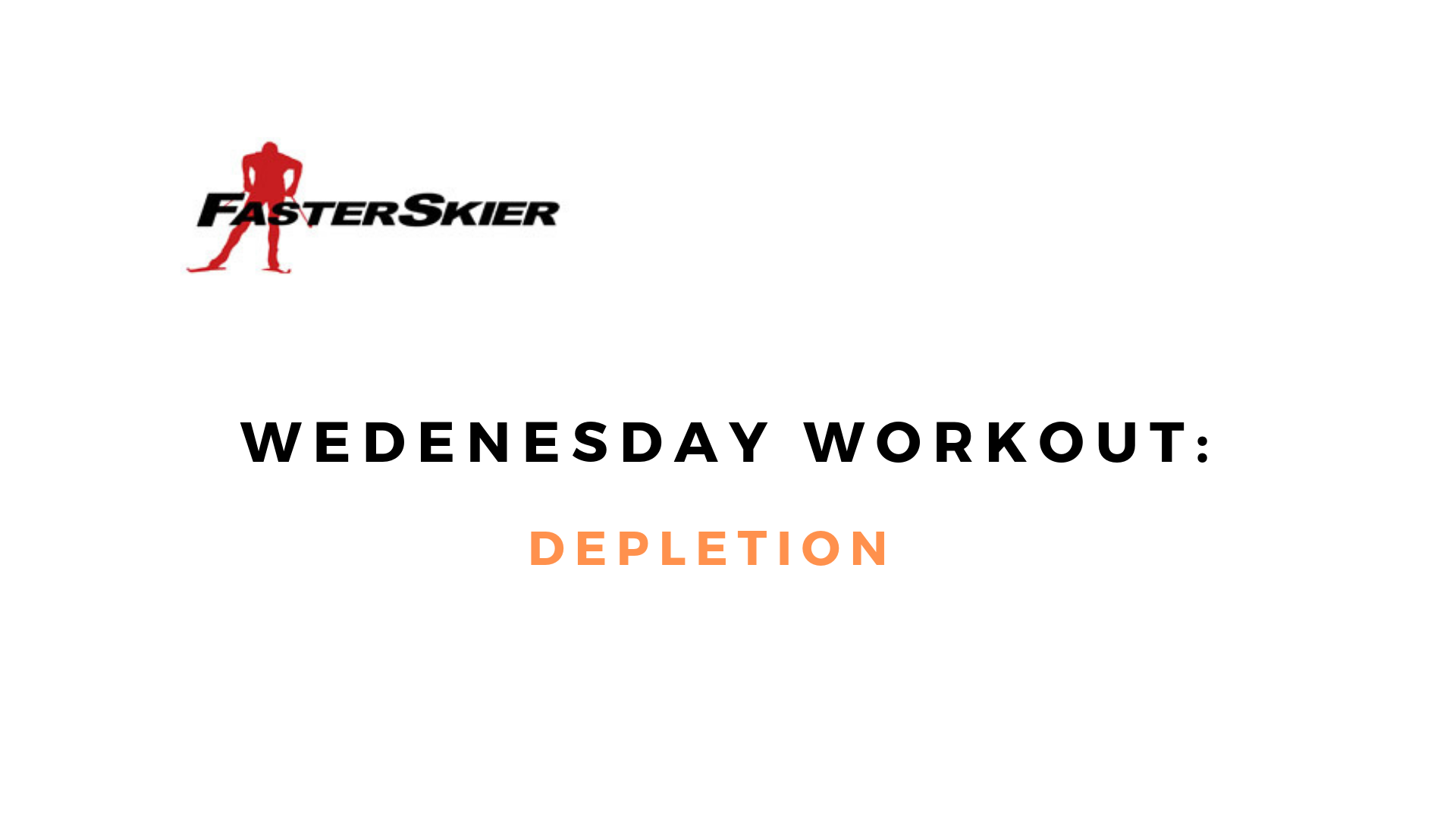 To be depleted can take on many forms. In endurance sport, depletion often refers to an athlete’s fueling state. Are they stocked up on muscle glycogen, have they properly fueled with a balanced diet of proteins, carbohydrates, and “good” fats or are they trending towards empty?

Carbohydrates are the body’s primary fuel source, particularly during exercise, however, fat molecules are a caloric gold mine when it comes to available energy. The caveat is that fat is not as readily available, as it is more difficult for the body to break down into a usable form. Some athletes use depletion workouts to train their bodies to better adapt to fat burning when training and racing. When glucose/glycogen stores run low, the ability to burn fat for energy might ward off the feared bonk.

The general rule of thumb goes like this: as exercise intensity increases, the body’s ability to burn fat (fat oxidation) decreases. Sprinters burn almost exclusively glucose/glycogen for those big bursts of speed. Those running marathons or skiing 30 and 50 k cross-country events also use glucose/glycogen stored in their muscles, but this fuel source will become depleted as the body is not able to produce glycogen at a fast enough rate to replace what is being consumed. If the long-distance athlete’s body is able to adapt to this depleted state and break down its fat stores for energy, they may be able to maintain their level of exertion longer with less dependence on fueling.

Some Craftsbury Green Racing Project (CGRP) athletes have been experimenting with their version of a depletion workout. Before we contrast this with what is done the realm of long distance running, CGRP skier Ben Lustgarten briefed us on their rollerski workout that adds elements of “depletion”.

“Refueling, naturally, is incredibly important for this workout,” Lustgarten said of the need to replenish stores following the effort. “It resembles most the feeling of a 50k so immediately after the interval, I try to eat carbs and protein, and I use Hammer Recoverite but just a good ratio of carbs, protein, and proper electrolytes is important. It actually feels kind of like my mountain bike races in the summer because they go from about 1h 30m to 2h long. Naturally, I fuel properly for those, but that duration and need for power in the legs feels kind of similar.”

Lustgarten emphasized that the CGRP depletion efforts are similar but not the same as what runners would call a depletion run or workout. He eats a normal breakfast of oatmeal before executing the workout. “I think for us it was more a basic depletion like L3 until you cramp and bonk,” said Lustgarten. “With the volume we are training, on the hard weeks, a full depletion would really destroy the quality after the workout for the next few days when we needed to keep training.”

“That is no normal distance ski,” wrote Maifeld-Carucci. The team only plans on a few of these workouts over the duration of the May-November dryland season.

FasterSkier reached out to Elliott Heath, a former pro-runner and the product line manager for track and field and racing at Nike to learn more about depletion running workouts. As part of his job, Heath spends time in endurance running hotbeds like Kenya, receiving feedback from athletes to optimize the racing shoe line. He also coaches for the Bowerman Track Club (BTC) based in Portland, Ore. and directs their summer running camp in Bend. Ore. One of his runners, Carrie Dimoff, will be representing the U.S. at the 2019 IAAF World Championships in Doha, Qatar. Dimoff races the marathon.

“Depletion workout or depletion run, there are probably different forms of it generally,” said Heath. “The idea is this: going for a long time and not fueling. A more common version of a depletion effort would be to set yourself up to be in a depleted state by doing a long effort in the morning before eating breakfast. You head out and go for your long run right away after waking up so that your body has less free and readily available energy stores in the muscles.”

For those with a ritual of big breakfast fuelings prior to a long effort, the mere thought of food-restriction can be a stressor. According to Heath, the whole premise is to train yourself in a depleted state.

“It puts you into a state where you have used all the readily available energy and your body has to figure out how to deal with that depleted state either by getting fatigued or switching over fuel consumption into things like fat and more long chain fuel stores,” said Heath.

In his experience, Heath, who ran competitively in Minnesota as a high schooler, with Stanford in college, and with Nike/BTC as a pro, depletion workouts are the realm of marathoners.

“It is pretty much exclusively marathoners, but it could be arguably applicable to a half-marathoner or even a 10k athlete in a less direct way,” clarified Heath. “But considering a direct benefit area, it is really only marathoners that are going to be experiencing that state in their race.”

The traditional methods for runners using depletion workouts are as follows:

This is an oversimplification of depletion runs. There are many ideas about how best to incorporate them into training and the type of preferred diet that should be maintained to optimize the efficacy.

Which brings us to an important point raised by Heath. He explained that coaches and athletes need to think of both stress and adaptation, but also stress and recovery.

“You are trying to balance the benefit of that adaptation process with the cost of possibly needing four more days of recovery to actually dig yourself out of that hole from the depletion session,” added Heath. “From a training perspective I would say yes, it is all about stress and adaptation but when it comes to something like depletion runs, there is always a trade off between stress and adaptation and stress and recovery. What I would think about in terms of incorporating depletion runs or depletion efforts into your training is what are the trade off costs?”

As a student of running, Heath has thought about the origins of depletion workouts and why they may have been adopted more widely. “I am sure there were origins of this being researched in the lab long before this, but what perked a lot of interest in depletion running was asking how Africans train for marathons?”

That question has been explored ad-nauseam. The answer as to why East Africans have come to dominate the world’s top marathons are complex. But something as basic as observing daily training routines and habits, as Heath does as part of his work with Nike in Kenya, reveals depletion happens less by design.

“A lot of African runners, they are not thinking about ‘OK I need to do depletion training’,” said Heath. “Their life routine is that they wake up at sunrise, and they go out and do their long run. They don’t have food until they are back from it usually. So I believe some people have looked at that and think all these African runners are the best in the world at marathons, and this is what they do. They are so good at the end of the race it must be because they are practicing this depleted state over and over and over.”

Causation and correlation then enter the conversation. And Heath can play devil’s advocate.

“You could make the flip side argument,” claimed Heath. “If fueling is actually really important, I would say in many races some of them still under fuel and do not take enough to replenish the system over the course of a two hour plus marathon. You could say they are the best now, but how good could they be if they fueled ideally? Is it the practicing of depleted state running that is making them great or could they just be better? There are a lot of other things that are making them great.”

In cross-country skiing, depletion training is no staple in the stress, adaptation, and recovery training matrix. And it is wise to remember that consulting an expert on your personal capacities, nutrition, and goals are important before engaging in a depletion workout. There are lots of right ways to do things, but only a long wait to dig yourself out of a training hole.

“Even along the lines of depletion runs, you can talk to five different coaches and get a handful of different opinions on whether that was important or not,” Heath said. “Some might say it is the gold standard and there is no way you should run a marathon without doing it. And another coach might say that you are crazy for doing that because all you are doing is sending your body through too much stress that you are not recovering well from.”

That said, Heath does not incorporate depletion running into the training for the athlete’s he mentors.

“It depends on the athlete, but in most cases, we usually prioritize practicing fueling and teaching the body to process that nutrition while running rather than seeking out a depleted state,” added Heath. “Naturally, there is likely to be some depletion over the course of a really long effort, but we generally try to avoid more excessive depletion. This prioritizes optimal recovery from the long hard sessions so that it’s easier to turn around a couple of days later for another hard session.”

Doing our due diligence, we contacted Stephanie Howe Violett PhD — a former skier and cross-country runner at NMU and accomplished ultramarathoner. Along with running professionally, she is a coach and sports nutritionist. She said what remains critical is that athletes maintain a long term outlook and steadily fuel their system. Howe Violett has never incorporated depletion running into her training.

“I think maximizing training and fueling properly lead to better physiological adaptations than trying to manipulate depletion runs,” Howe Violett emailed. “There is no scientific evidence that this is helpful in the long term, or even the short term for performance. Of course, we want to stress the body to lead to the greatest adaptations, but training in a fasted state doesn’t do this. If anything it reduces the intensity at which one can train and creates a longer recovery time, both of which are negative for performance.”

“I’d really work closely with an exercise physiologist and sports nutritionist because low glucose can lead to many negative performance and health issues,” said Howe Violett. “Overtraining, injury, illness, disturbed mood state, negative impact on performance are the short term consequences. But these can take weeks to years to correct.”

If you are reading this, we assume you are interested in skiing. To be clear on how the CGRP athletes are “depleting” themselves, they are not adhering to the strict concept put forth by depletion running. They are fueling with a solid breakfast before their roughly two hour depletion rollerski. They are also montitored closely by their coach and have access to high quality food at the Craftsbury Nordic Center. Further, the athletes using this workout are doing so sparingly, two to three times over nearly a seven month dryland training period.