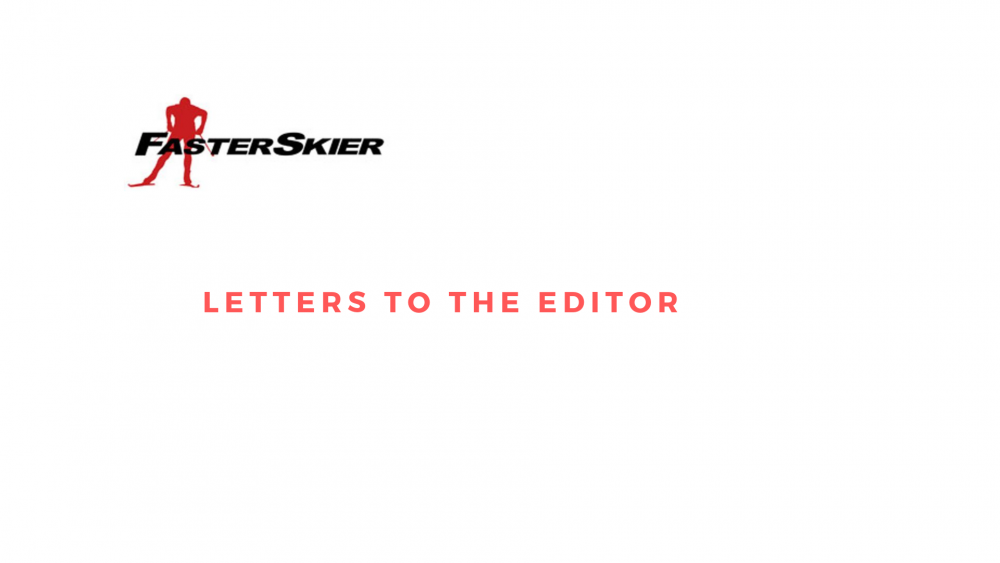 FasterSkier respects a diversity of opinions when publishing letters to the editor. Feel free to email info@fasterskier.com with your op-ed piece.

I appreciate FasterSkier acknowledging the long-overdue PFAS wax problem (PFAS, or per- and polyfluoroalkyl substances, is a catch-all term for thousands of man-made compounds based on carbon-fluorine chemistry). Those who are unaware of the issues surrounding PFAS or did not read FasterSkier’s earlier article on the topic should know why the EPA has stopped the ski wax industry from importing highly-fluorinated ski waxes last winter.

By 2010, U.S. manufacturers of PFOA—the most common PFAS used in early stain treatments, Teflon, and still used in ski wax production—had voluntarily reduced production by 95%, and ended all U.S. commercial production by 2015. The U.S. chemical industry did this voluntarily, and if the U.S. chemical industry voluntarily removes a profitable chemical from the market, you know there is something very, very wrong with it (research the 3M settlement in Minnesota for more background).

In 2013, after years of study, the European Union deemed PFOA a chemical of very high concern because of its mutagenic, carcinogenic, and reproductive toxic qualities and because it is a persistent, bioaccumulative, toxic (PBT) chemical. PFOA and related chemistries are now considered Persistent Organic Pollutants under the Stockholm Convention, a designation reserved for some of the world’s most hazardous materials.

Highly fluorinated waxes are PFOA or other long-chain PFAS.

Why are PFASs such a problem? Carbon-fluorine bonds are incredibly strong. PFAS compounds made with them do not exist in nature and there is no biological mechanism that we know of for destroying them, according to Rolf Halden, director of the Biodesign Center for Environmental Health Engineering at Arizona State University. Hence, they do not readily break down in the environment, if at all. Every gram of PFAS wax ever put on a ski will still be circulating through the environment long after our great, great, great grandkids are dead.

PFAS compounds have been found in every human tested in the U.S.; are found in wax techs at high concentrations; they can linger in our bodies for more than six years; and they are carried through umbilical cords. PFOA has been linked to cancer as well as liver, thyroid, reproductive, hormone problems, and more. For a short list of research regarding health and environmental impacts, plus some background, see the Green Science Policy Institute website.

Because of the health risks, personal ventilation are now standard practice for many national ski teams. Recreational skiers usually don’t have those resources and instead wax, brush, cork, polish, and track long-chain fluoro dust in their homes, often where children are present. That wax later wears off ski bases directly onto local trails. And for what?…a few minutes in a recreational pursuit?

PFAS compounds are incredibly chemically stable, so they will not show immediate toxicity like many volatile solvents. The ski industry has been using them for years without observable harm, so aren’t we overreacting? The scientific and legal communities don’t think so. In 2017, Dupont and Chemoirs paid $670 million to settle lawsuits from people harmed by PFOA exposure from factories. 3M paid Minnesota $850 million in 2018. Here is a short list of lawsuits settled or pending as communities realize their drinking water supplies (among other things) have been contaminated by PFOA: NH, VT, NC, MN, NY, NJ. There are many more lawsuits to come.

What about “low fluoro” waxes that contain short-chain (typically six or fewer carbon-fluorine bonds) chemistries? Those too are persistent and bioaccumulative, and though considered less toxic than their long-chain brethren, they share many of the same characteristics and no one knows the full long-term health and environmental impacts of these chemicals. Long-chain PFAS are often found in short-chain PFAS production.

This is not just a wax-tech/human problem either. PFAS are extremely complicated and have been found in animals on every continent and impact different species differently. There are even differences in how the same compound impacts males and females of the same species. And there is no practical testing that can predict how the thousands of PFAS compounds on the market will impact all species and sexes across our ecosystem as a whole. The risks of using them for skiing are simply not worth it.

In the building community, the PFOA problem has been well known for years. Product manufacturers moved away from long-chain PFAS carpet and textile treatments in 2010 (think Scotchgard) and have since moved to short-chain formulas in concentrations of 350 parts per million or less (highly fluorinated long-chain PFAS waxes are sold by the gram). Yet few in the green building community knowingly select PFAS treatments anymore. The Healthy Hospitals Initiative, Kaiser Permanente hospitals, and many architecture firms no longer use products that contain PFAS. San Francisco does not allow them on city carpets, and just last week, Home Depot pledged to stop selling any carpet or rug that contains PFAS compounds. Even Gore-Tex, which was founded on PFAS technology, has pledged to stop using it by 2023.

In the ski industry, the issue is likely to become moot in the next few years as the European Union is poised to make PFOA products/highly fluorinated waxes illegal in 2020, and it is likely that short chain C-6 chemistries will follow a few years later. Knowing the extensive information available on PFOA and other PFAS compounds, if these waxes remain available for use, will racing for results now be an ethical choice? When we require an environmentally hazardous substance in order to be competitive, how does that taint our perception—and that of non-skiers—of the outdoor sport we love and that many see as a symbol of health, fitness, and nature?

What message does it send to youth if high-fluoro waxes are still allowed at the world cup level? If you want to be competitive, train hard and someday you too will have to use a wax that you know is a health and environmental nightmare. That is not a good reward.

The ski industry is on the wrong side of history. The PFAS problem is going to be a black eye that stays with us for years. The FIS needs to show leadership and set an example by banning all PFAS waxes from competitions, and skiers need to stop purchasing and using them. Yes, it’s going to be tough being noticeably slower, it will be messy enforcing the ban at races, and I feel for those who have built their lives around these waxes—especially racers, wax techs, and vendors who have been exposed to them or sold them without knowing the risks. But these waxes will be banned soon enough and we need to get to work now to solve a problem that we unwittingly helped create. There is no burying the problem in the snow anymore. We need to take action now or non-skiers and future generations have every right to hold the industry, and skiers, accountable. For an industry already losing skiers to a changing climate and alternative sports, I don’t think we can afford to alienate any more of our youth.