West Yellowstone is many things: a gateway to the world’s first National Park, a tourist-chotzche goldmine, a jumping off point to blue-ribbon streams and reliable late November cross-country skiing. Even remote West Yellowstone, like any other place boasting out your door recreation opportunities, can feel the pressure from development.

If you’re headed to West Yellowstone for the annual Yellowstone Ski Festival, expect to do a double take while parking near the trailhead. The iconic “Welcome to the Rendezvous Ski Trails” arch still remains with it’s signature cowboy font screaming “frontier”.

But just feet away from the arch, and literally inches from the fence line on which you’ve probably rested your skis, rises an under-construction multi-purpose garage. The garage, at over twenty feet tall, is part of a residence just to the west of the Rendezvous Ski Trail’s main entrance and lodge. Development happens. And in-fill development in less densely populated towns can initially be a visual shock.

Skiing and grooming will not be impacted during the festival. But for local stakeholders, in particular, the West Yellowstone Ski Education Foundation (WYSEF), the construction has raised concerns.

With normal snowfall in West Yellowstone coupled with well-below freezing winter temperatures, large amounts of snow can accumulate on roofs. Around town it’s common to see roof-cornices develop later in the season. WYSEF is concerned about trail user safety as the new structure encroaches on a longtime town right of way. According to a Forest Service letter posted in the Town Council’s minutes from September 17, over 40,000 users access the Rendezvous trail system via the trial entrance adjacent to the new garage. In the letter, the Forest Service also raised the issue of roof cornices as a potential hazard.

According to documents presented at the Town Council meeting, the garage owners claim the town had in fact signed off on the building plans and the designated setbacks for the new garage. The property owners claim the city granted a setback called a “zero lot line”. In other words, the garage was permitted to have a wall on the property line adjacent to the main ski trail access point.

Depending on who you ask, the setback rules are either convoluted, clear, or antiquated. This much is true: The WYSEF trailhead building sits on city land. WYSEF and the city have a memorandum of understanding, or MOU, allowing WYSEF to use the land for a nominal fee. The trail/grooming path leading to the ski trails crosses city property and terminates at Forest Service land where the trail system continues. A federal agency, the city, WYSEF, the Chamber of Commerce which owns the trailhead lodge, and the garage builders are all looking for some give.

At the September 17, Town Council meeting, a variance request from the homeowners was considered. The variance would have allowed the homeowners to bypass local zoning laws for their side yard setbacks. Concurrent with the variance request, and well before the meeting, stakeholders began to voice their concerns. As a result, the city suspended construction while stakeholders weighed in.

The Town proposed that the pre-existing WYSEF fence be moved seven feet further onto city land, towards the ski lodge. WYSEF would then move the Rendezvous Ski Trails arch and build a new groomer path on the east side of the building (See images). WYSEF submitted a claim that the proposed variance was flawed as it degraded access to federal land and it ceded public property to private use. The city ultimately granted a variance with a 2.5-foot setback from the fence line. 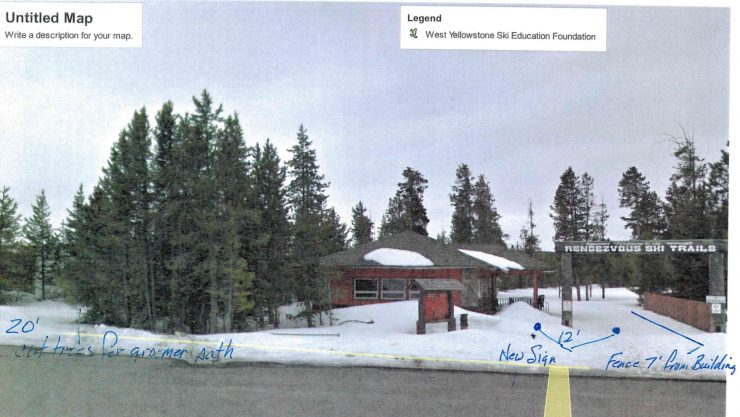 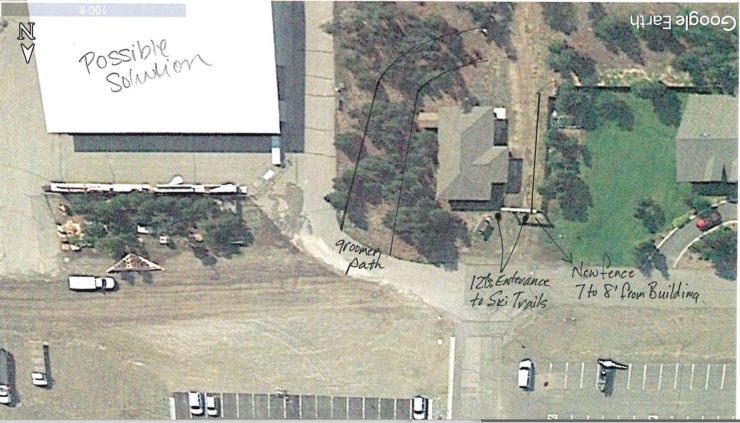 For now, it appears the fence line will remain in its historic place. This leaves WYSEF with some short and long term issues as it tip-toes through a maze of land parcels owned by private, city, and federal entities. Not to mention the prospect of a sliding roof-cornice.

Land use and stakeholder conflicts aside, WYSEF is a mom and pop entity. They work with several different stakeholders to provide affordable world class skiing. The costs for any of the proposed long term solutions are high. Who will pay for any of the permanent solutions remains undecided.

“The WYSEF Board will continue to work with the city in regards to this important issue and continue to look at all options going forward,” stated an email received by FasterSkier.

Prepare for that double take as you visit the Rendezvous Ski Trails for the first time this season. The Montana big sky is still there, but so is a big garage.

Find Your Ski Talents in Crested Butte this Thanksgiving