The sinkhole that was 2020 had a few bright spots. Within the small community of Canmore – a hub of Canadian cross-country activity, Amanda (formerly Ammar) and Chris Butler welcomed their new-comer, Frankie, on March 23rd, 2020.

Amanda and Chris are used to the get-down-to-business and get-it-done mantra of cross-country skiing. They both are longtime elite cross-country skiers. But this is not the time to qualify past speed with results or team nominations. This is about their daughter Frankie and community: more important stuff. 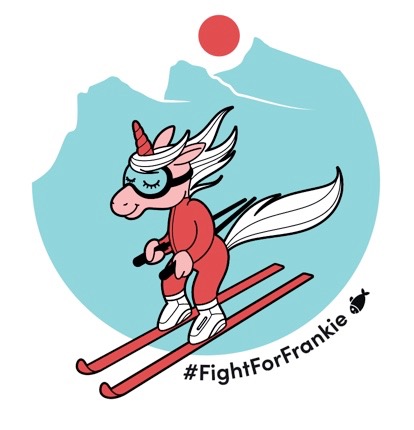 This fall, Frankie was diagnosed with Atypical Teratoid Rhabdoid Tumor (ATRT), an aggressive form of cancer. During emergency surgery in October, doctors removed a tumor from her brain. At roughly seven months old, in November, Frankie began chemotherapy.

The news as of January 21 was good for the Butlers. “Frankie had an MRI today and the results show that the tumor is shrinking! The chemotherapy is working!!!,” stated the Baby Frankie GoFundMe page.

There are a few ways folks can help out. You can donate a meal if you live near Canmore. You can make a tidy donation to GoFundMe, or buy some funky fundraising schwag found on fightforfrankie.com. Buffs are sold out, some t-shirts remain, and “Fight For Frankie” Phanny Packs from Free Range Equipment can be made to order. Free Range ships globally, while the buffs and T-shirts (more should be on the way) are for local pickup at specific locations in Canada only.

The most recent order for Free Range Frankie Phannys closes on February 7. Thirty percent of Fight For Frankie Phanny sales go back to support the Butler family.

Here at FasterSkier we know news isn’t always good news. And we know there are many good causes out there. We felt compelled to assist Frankie and raise awareness that the Butler’s could use widespread community support.