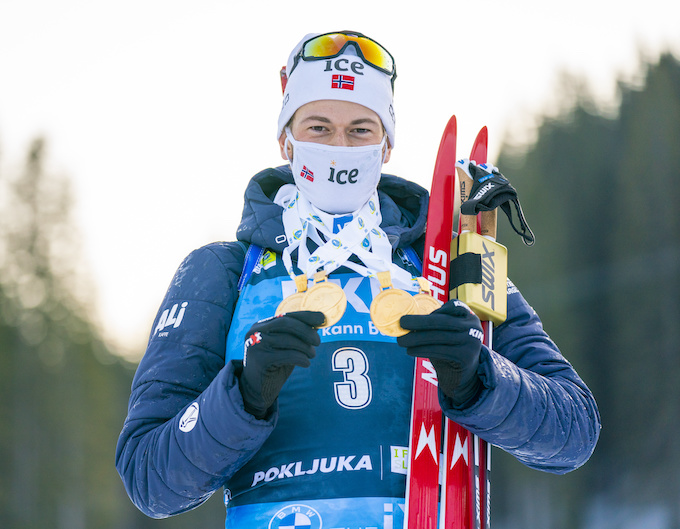 From rookie to king of Pokljuka: Sturla Holm Lægreid (NOR) takes home no less than four – FOUR – gold medals from his first ever IBU World Championships at the senior level.

First, Lægreid set Norway up for GOLD when he skied the first leg in the mixed relay on February 10, the first event of the 2021 World Championships in Pokljuka (SLO).

Then, he bagged his first individual GOLD medal when he won the 20-kilometer individual competition on February 17 with a performance that made it look almost easy: The 23-year-old shot clean at the range. Even though the pressure was growing each and every time he entered the range, he nailed every single one of the 20 targets. He was lightning fast on the track, despite arriving at the finish line so cooked that he barely knew where he was.

On Saturday, February 20, which was also his 24th birthday, Lægreid earned his second relay GOLD medal. Once again, he set Norway up for victory with an impressive first leg. Lægreid tagged off in first place with nearly 25 seconds to the next team.

And finally, on Sunday, February 21, Lægreid capped off his first World Championships with a fourth GOLD medal – his second individual victory in less than a week. With three gold medals already under his belt, Lægreid took charge and dominated the 15-kilometer mass start. He parked his competitors on the course, crushed them at the range, and cruised alone to the finish line.

The secret sauce? Focus.
“I have different methods of meditation. One method is to just pay attention to my breathing, which has helped med train my ability to stay focused. Visualization is another method. That’s where you put yourself in the situation you anticipate will happen, imagine what the different scenarios will be, and imagine handling it,” Lægreid explains.

“This way, I’ve done the race my head like ten times before I step up to the start line, and having gone through it all, I have a good plan and I know exactly what to focus on.”

Let us recap the season so far:
In his first year on the national team, and his first full World Cup season, Lægreid has delivered from the start.

In November, he bagged his first World Cup victory, in the 10km sprint at the World Cup opener in Kontiolahti (FIN). Since then, Lægreid has been on the podium in nearly every World Cup event.

At the 2021 IBU World Championships in Pokljuka (SLO), his first at the senior level, Lægreid took home no less than four gold medals: in the mixed relay and the men’s relay, the 20-kilometer individual competition and the mass start.

Icing on the cake:
Lægreid has also won the 2021 IBU distance World Cup, in his very first full World Cup season. However, there are still several races left on the race schedule.

Also at the 2021 IBU World Championships
Vanessa Hinz helped Germany to the silver medal and Anastasiya Merkushyna helped Ukraine to the bronze medal in the women’s relay, while Matvey Eliseev helped the Russian team to third place in the men’s relay.

Racing in the Time of Covid, Part I: The Nature of the Problem