“Go back and watch the video,” is something I have heard and done maybe 100 times collectively since the men’s 50 k mass start classic concluded with a winner then a DQ, then another winner on Sunday as the 2021 World Championships slammed the door on competition.

To say it was a bizarre scene would be an understatement as Norway’s Johannes Høsflot Klæbo and Russia’s Alexander Bolshunov rocketed into and around a sweeping left-hand curve and into the final straight in Oberstdorf. Here’s what I wrote to describe the scene on Sunday:

“No matter how you look at it, pro-Russia, pro-Norway, pro-fun racing, Bolshnov went wide to close the door on Klæbo, and the Norwegian sprinter nearly lost his balance dodging V-boards, ski tips, and Bolshunov’s physical presence. During the brush-up, with no crowd noise, you can hear Bolshunov’s pole crack with the bottom half falling to the ground after he stuck it between his legs.

“As Klæbo and Bolshunov re-centered, both now with barely enough room to push the pedals down, the drag race ensued with, as one might guess, Klæbo winning and Bolshunov, with one effective pole, losing ground. It looked like this: Klæbo as the 2021 championship sprint champ and 50 k classic champion in 2:10:52.2. Iversen, for his part, closed in down the straight and passed Bolshunov for second place (+0.7), with the Russian crossing third (+1.4) while slamming his now-dysfunctional pole to the snow.”

After watching the race, watching slo-mo on the rewindable live-feed, and listening in on Devon Kershaw and Alex Harvey discussing the details of the rumble in Oberstdorf, the case seemed maybe a few degrees clearer in terms of who had the right of way. If you are looking for a 3000-word treatise on the FIS rules and how obstruction in and near the finishing lanes has been interpreted, this is not it. We hope to have something for you next week. For now, social media appears to be a rife environment for opinions and speculation.

After the race, when Klæbo had been disqualified, the Norwegian Ski Federation (NSF) intimated they would appeal the race jury’s decision to DQ Klæbo for obstructing Bolshunnov. That appeal came from the NSF, reportedly, on Tuesday. On Wednesday, with a post on Instagram, Klæbo informed the public he asked the NSF to rescind the appeal. The NSF is bowing to the skier’s wishes.

I must honestly admit that I have had some difficult days – and a roller coaster emotionally. Yes, I have been far down – and it has been dark. It has taken a lot of energy, and I do not want to spend more time and effort on this. The case has become much bigger than the competition itself. I was born and raised with ski races in Nilsbyen. Now they have to decide the result of a ski race in an office – and that’s wrong. But I have to look ahead. I have had my best days in my definitely best world championship, and I will make sure that I will never be in this situation again. I have just told the Norwegian Ski Association to cancel the appeal to FIS jury. In any case, there would not be the same to get the gold medal several days after my best race in my entire career. I lost that feeling on Sunday. I will always believe that I did nothing wrong – and that I did NOT prevent anyone. But now I’m done with the case and have to focus on the weekend’s World Cup final. I want to congratulate Emil on the victory – and I think he deserves a real celebration. Congratulations friend! At the same time, I would like to congratulate Bolshunov on his silver medal. He is a brilliant skier. We will have many tough competitions in the future. I look forward – and will do what I can on Saturday and Sunday. 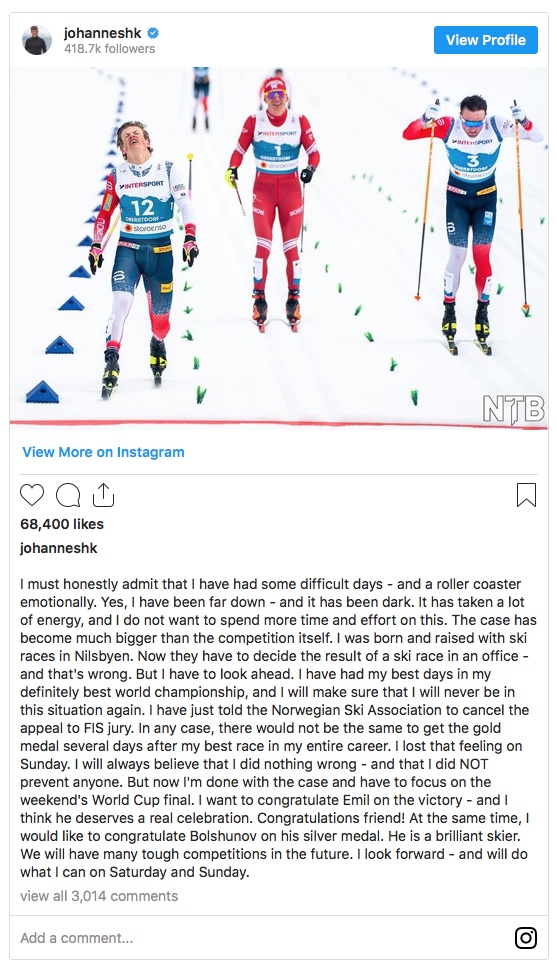 Strength On-The-Go with Kern and KO