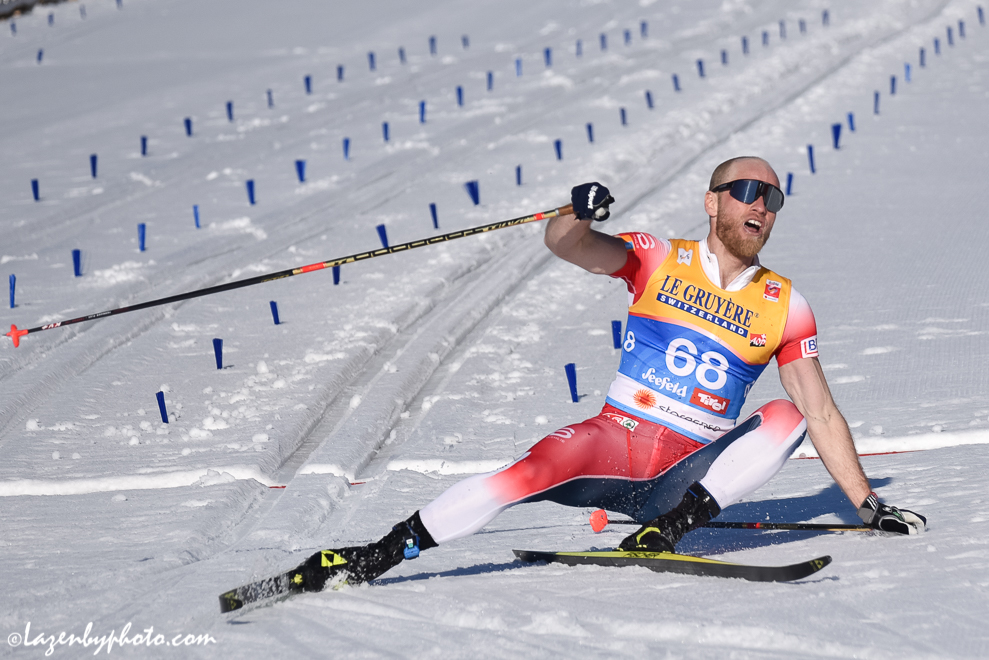 It was a tough day in Seefeld, Austria Wednesday on and off the race tracks. The efforts and drama in the men’s World Championship 15-kilometer classic were overshadowed by the news of several athletes arrested on suspected doping violations. The distractions shed more light on the underbelly of some high-speed athletes and those who support the cheating. The only thing deafening the day’s police actions was the roar of the considerable Norwegian fanbase in Seefeld. 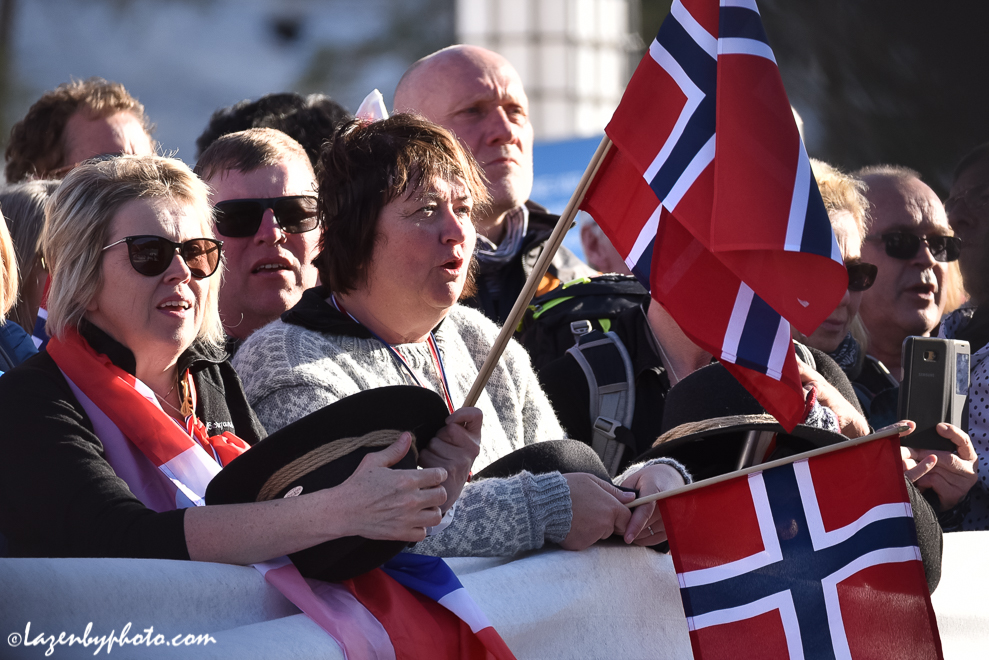 Home away from home. Norwegian fans at the flower ceremony for the 15 k classic at the 2019 World Championships in Seefeld, Austria. (Photo: John Lazenby/lazenbyphoto.com)

Shedding his usual toque, Norway’s Martin Johnsrud Sundby hammered up the final hill revealing his seasoned years as a top form athlete. Sundby’s bald dome and iconic beard coupled with his raw lumberjack build were a throwback to old-school power generation. Although only 34, Sundby now looks like a cherished relic when compared to the coiffed flare of a Johannes Høsflot Klæbo. On a day when it was Sundby’s moment, so much for the young and the restless.

How many times have we seen the almost? The almost win in the World Championships. A query of top-five individual World Championship results reveal seven races within that mark — none of them wins for Sundby. There was a third place in the 2011 Oslo championship 15 k classic. In total, he has two thirds and three second-place finishes at Worlds.

Perhaps the most crushing “almost” came in 2017 when Sundby was poised for his first elusive championship win. In the closing moments of the 30 k skiathlon, as he dueled Russia’s Sergey Ustiugov, Sundby made his hop-skate move on the final climb. It looked like a kill shot: uptempo, perfect technique, and a jolt of kinetic energy that could only deliver the win.

Then there was a literal snap. Sundby’s pole broke in two and Ustiugov was gone. The Norwegian fans that had been screaming let out a collective sigh and then silence. Not that a second place, which Sundby earned in that race, was nothing to celebrate — but Norwegian fans travel for the win. 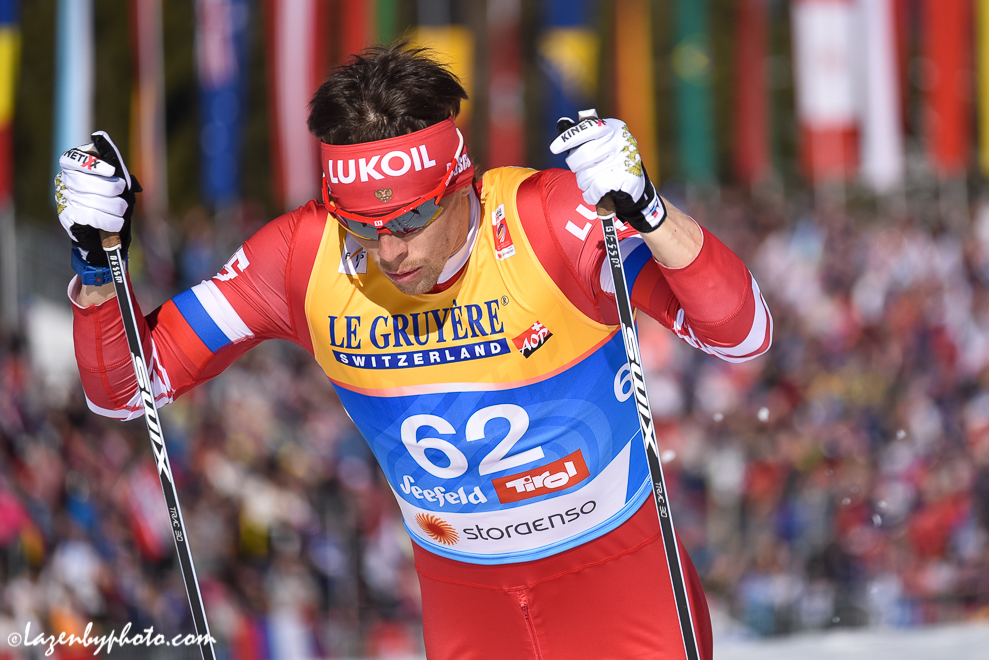 Russia’s Alexander Bessmertnykh during his near-miss second place in the 15 k classic at the 2019 World Championships in Seefeld, Austria. (Photo: John Lazenby/lazenbyphoto.com)

As if Sundby’s considerable force alone could not propel him on Wednesday, the soundwaves in Seefeld from the fans perhaps gave him that extra oomph. Sundby took his first career championship win in 38:22.6 minutes. Russian Alexander Bessmertnykh placed second (+2.9), and Iivo Niskanen of Finland placed third (+20.4). 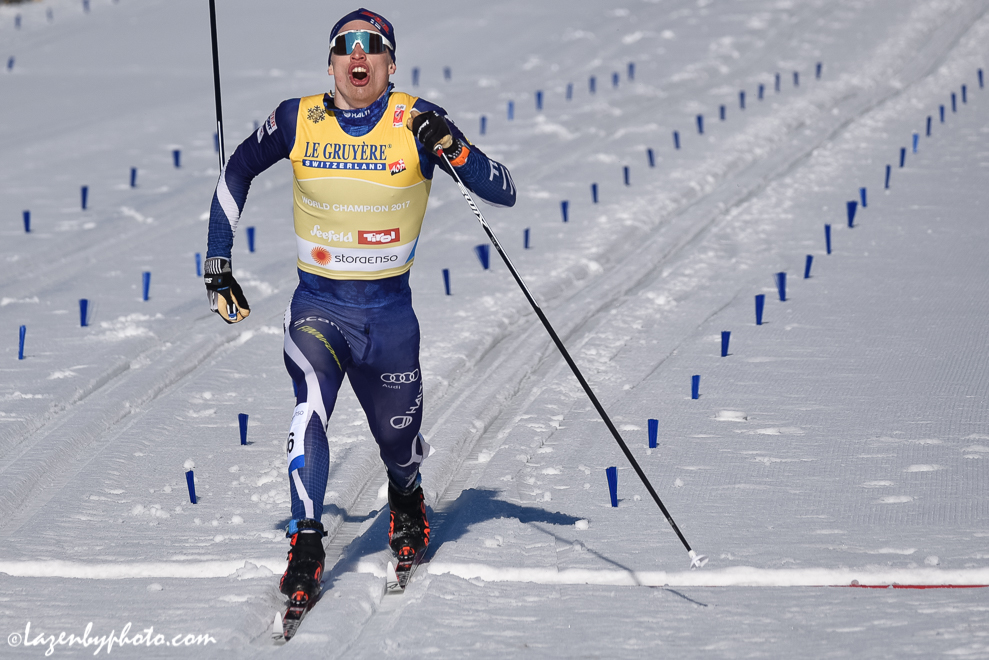 Finland’s Iivo Niskanen crossing the line in third place during the 15 k classic at the 2019 World Championships in Seefeld, Austria. (Photo: John Lazenby/lazenbyphoto.com)

The 15 k classic was a hot affair even without the world class speed. With temps well above freezing and short-sleeves and no-shirt the day’s chosen racing style for many, Sundby did not wilt. He was 8.3 seconds behind the time check leader Bessmertnykh at 5 k. At 9.8 k Sundby ceded more time to the Russian, coming through the check 13.9 seconds back. Like a slow and steady fisherman reeling in the prize, careful to not reel too fast or over-tension the line, Sundby played pacing brilliance: his 6.6 seconds behind at 11.25 k became a 2.9 second margin of victory as he crossed the line.

Here it is, in an official race report for the first time at a World Championships or Olympics in an individual race…Sundby wins.

“It is a lof them, it is a lot of everything,” a teary Sundby told the International Ski Federation (FIS) after the race when asked about his emotions. “I did not think it would be this emotional in this kind of a moment. It has been a long time coming. Yeah. I made it. We have a fantastic waxing team and so many good teammates and people that believed in me are finally getting this one. “

When asked about his knowledge of the race’s tight standings, he claimed he understood it was close, but he was unaware of how close the margins were.

“A lot of messages out there and difficult to sort them and to get,” said Sundby. “I kind of heard I was fighting for some medals out there but the gold medal was in reach I did not know.” 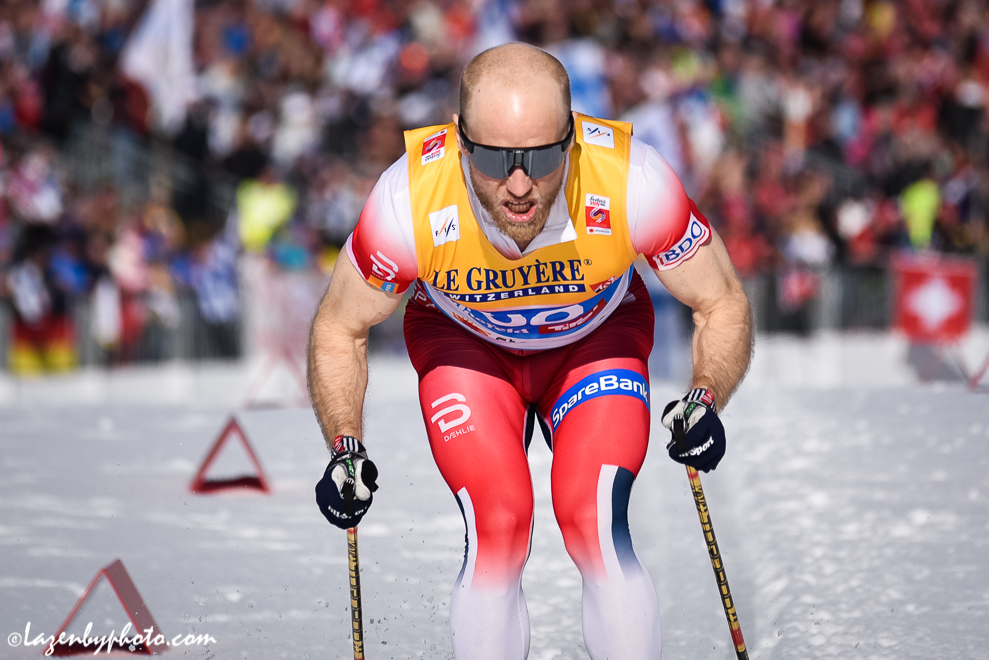 Norway’s Martin Johnsrud Sunday on his way to winning the men’s 15 k classic at the 2019 World Championships in Seefeld, Austria. (Photo: John Lazenby/lazenbyphoto.com)

Sometimes the athletes who step atop the podium, despite their speedy skiing, let us down. Sundby is no stranger to that plotline. In 2016, he was sanctioned for twice exceeding the limits of a specific asthma medication. FIS and the Court of Arbitration for Sport (CAS) ruled that Sundby was not an “intentional doping offender”.

The history of asthma medication and Norwegian skiers could fill a tome. And on a day for celebration, there is still too much to digest, unpack, and shake the head at. Sundby is the guy in Norway wearing the Yankees hat, or towing his kid around Sjusjøen in a ski pulk. He embodies the modern-sport conundrum –  the affable winner with the skeletons in the closet. He’s now an individual champion.

The U.S. Ski Team’s Erik Bjornsen, at twenty-seven-years-old, led all North Americans in the 15 k classic field when he placed 17th, 1:50.3 minutes back.

In a phone conversation after the race, Bjornsen explained he prides himself on race consistency. So far, his 2019 World Cup has been up and down. More often than not, he has found himself beyond the benchmark of top-30 and in the points. 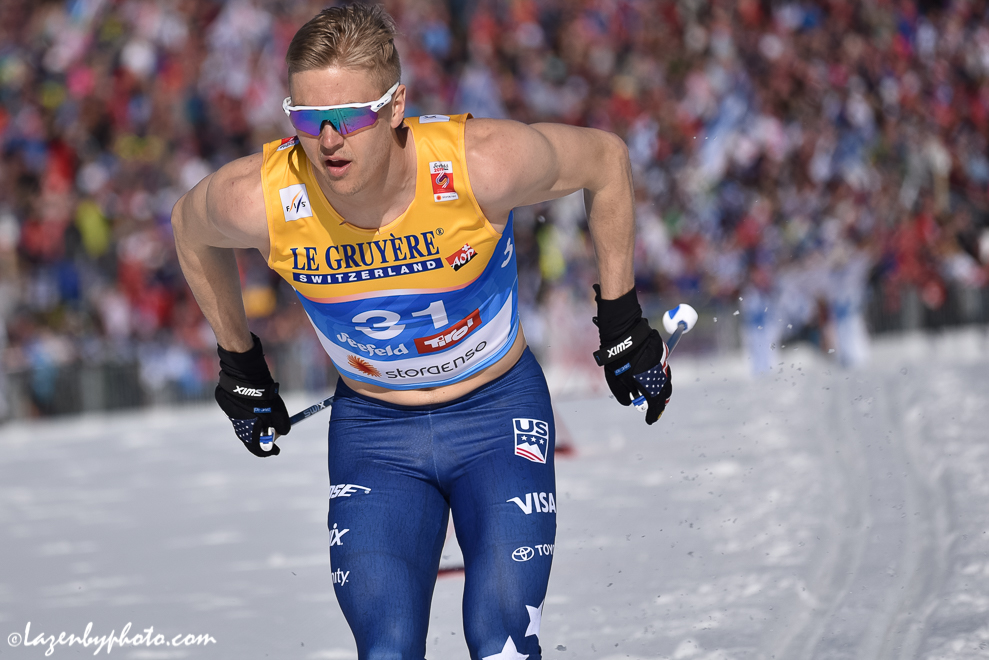 Erik Bjornsen of the U.S. skiing to 17th overall during the 15 k classic at the 2019 World Championships in Seefeld, Austria. (Photo: John Lazenby/lazenbyphoto.com)

“I changed my training quite a bit this summer, I was, of course, trying to make another step forward but I haven’t necessarily felt like it and made that even though I have had some standout results,” said Bjornsen. “I’ve always been proud of my consistency and that is something that I haven’t really had so much this year, but I’m starting to feel better.”

On Dec. 2, in Lillehammer, Bjornsen skied the third fastest time of day in the 15 k classic pursuit. But Bjornsen has wanted more and it took until the World Cup prior to the Seefeld Championships to wait for it – he placed 16th in the 15 k classic.

Bjornsen explained that his race sensations on Wednesday were not indicative of his end result.

“I was just feeling a little heavy and struggling on the hills, and I think that has maybe been a strength of mine in the past, and I’ve felt really good on the double pole sections, but there’s a lot of climbing, like today there was a lot of long climbing sections and so those high endurance athletes were making good time on these long working sections. … Today there was a lot of that bounding-type running and I was just not able to push those long hills as much as I would have liked, but I think it’s a good sign that I can be seventeenth at World Champs and not feel like it was a good day out there.” 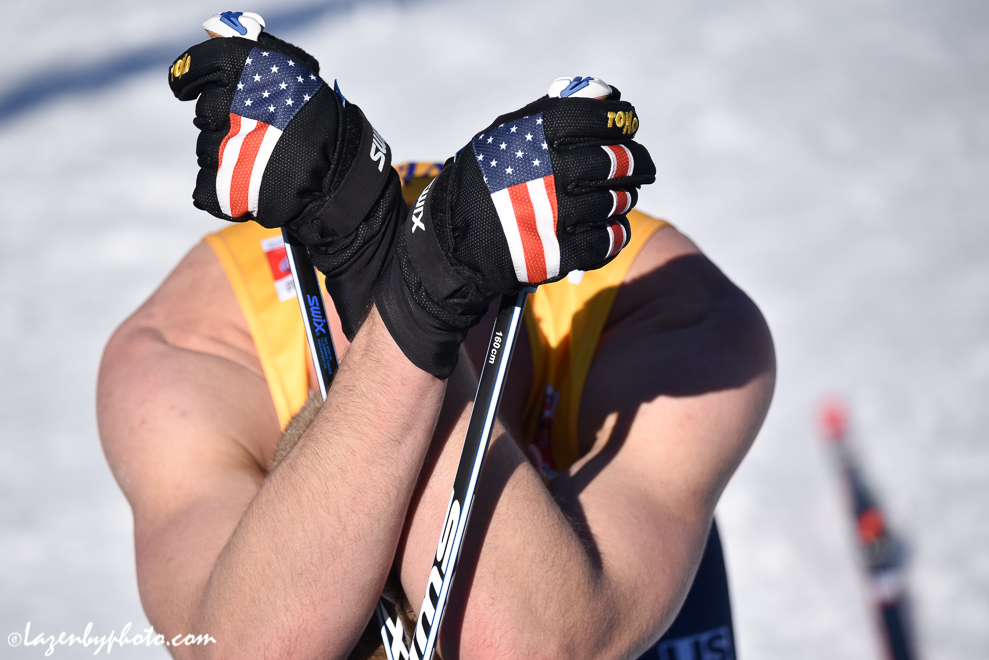 Erik Bjornsen after placing 17th in the men’s 15 k classic at the 2019 World Championship in Seefeld, Austria. (Photo: John Lazenby/lazenbyphoto.com)

With a notable result in a marquee time-trial type event like a 15 k interval start, Bjornsen was able to seed his belief that he can wring out more.

“I think that even though I haven’t been having the results I was hoping this year, I think I’ve learned a bit about myself and the way I react to some training techniques, and I think I can take that and apply it to the training next year,” said Bjornsen. I feel like I’ve learned a lot and I’m kind of excited to go into this summer’s training and try some more new things. I think to the point where I have to keep trying new things so I can hopefully make this next step, because I think it’s close to where if I can make another step top-10’s every couple of weeks should be possible.”

Racing continues for the men on Friday with the 4 x 10 k relay. 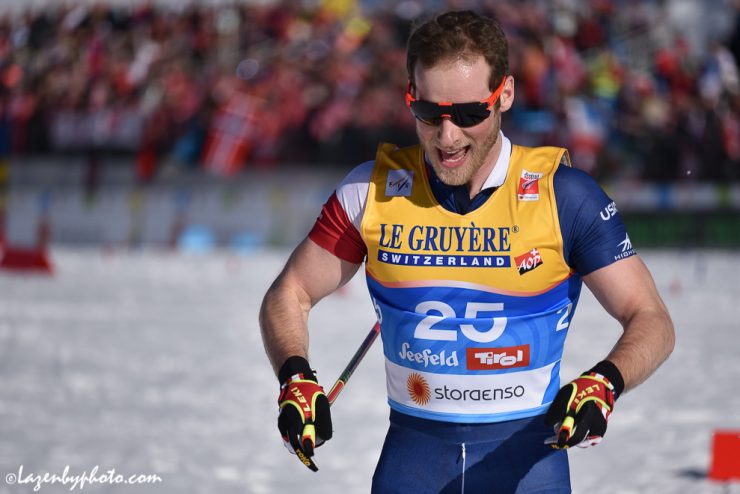 Ben Lustgarten of the U.S during the 15 k classic at the 2019 World Championships in Seefeld, Austria. Lustgarten placed 45th.(Photo: John Lazenby/lazenbyphoto.com) 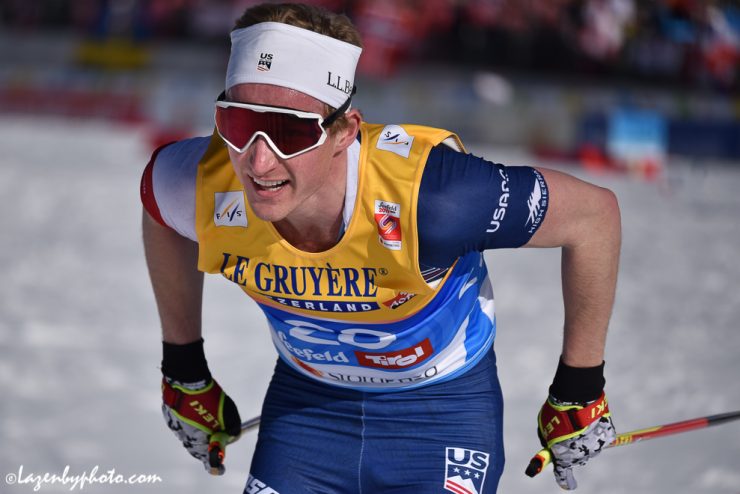 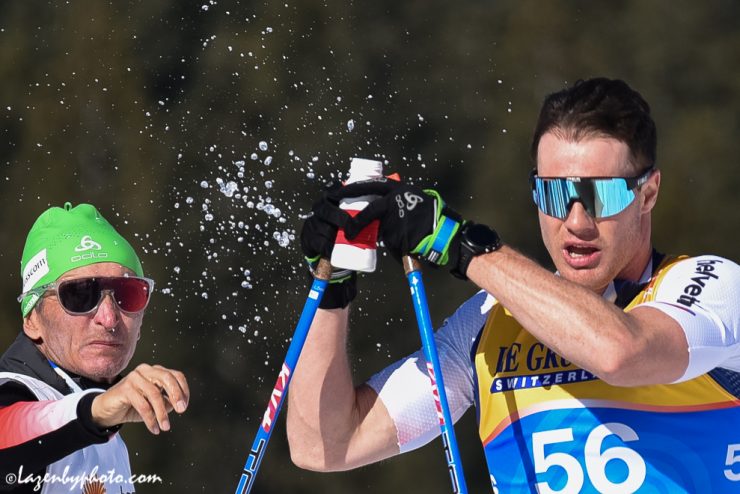 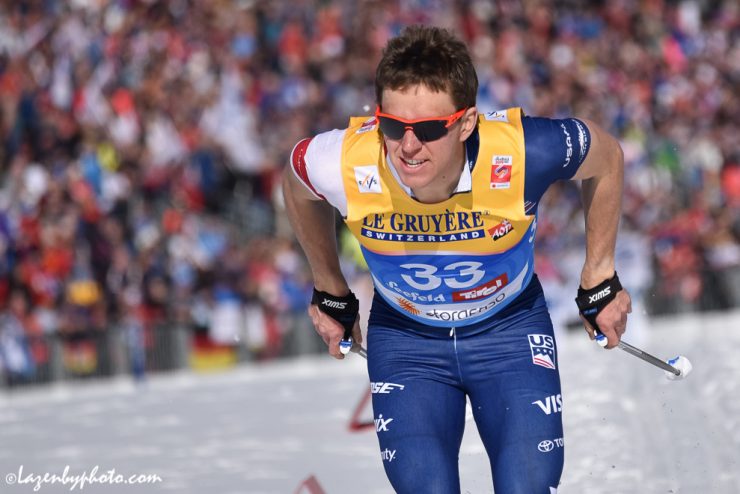 Scott Patterson of the U.S during the 15 k classic at the 2019 World Championships in Seefeld, Austria. He placed 30th overall. (Photo: John Lazenby/lazenbyphoto.com) 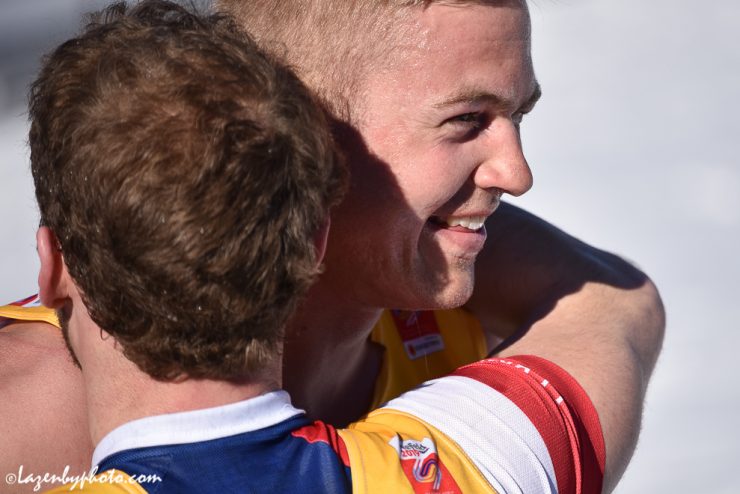 Erik Bjornsen get a congrats from Ben Lustgarten after the the 15 k classic at the 2019 World Championships in Seefeld, Austria. (Photo: John Lazenby/lazenbyphoto.com) 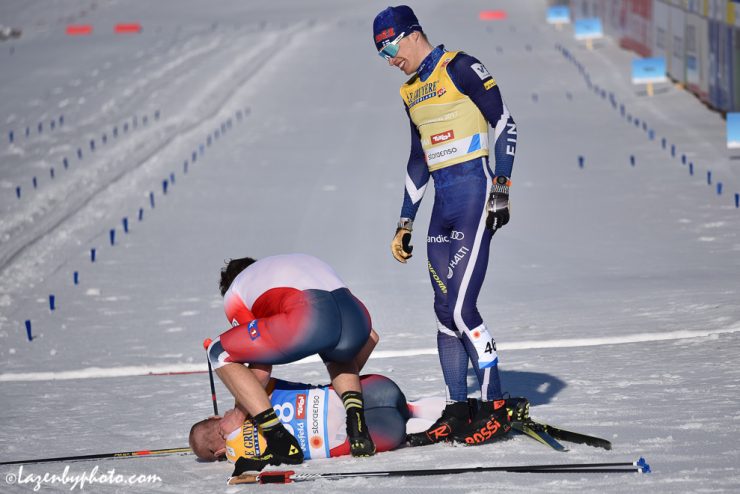 A tired Sundby soaking it in after the win. (Photo: John Lazenby/lazenbyphoto.com)