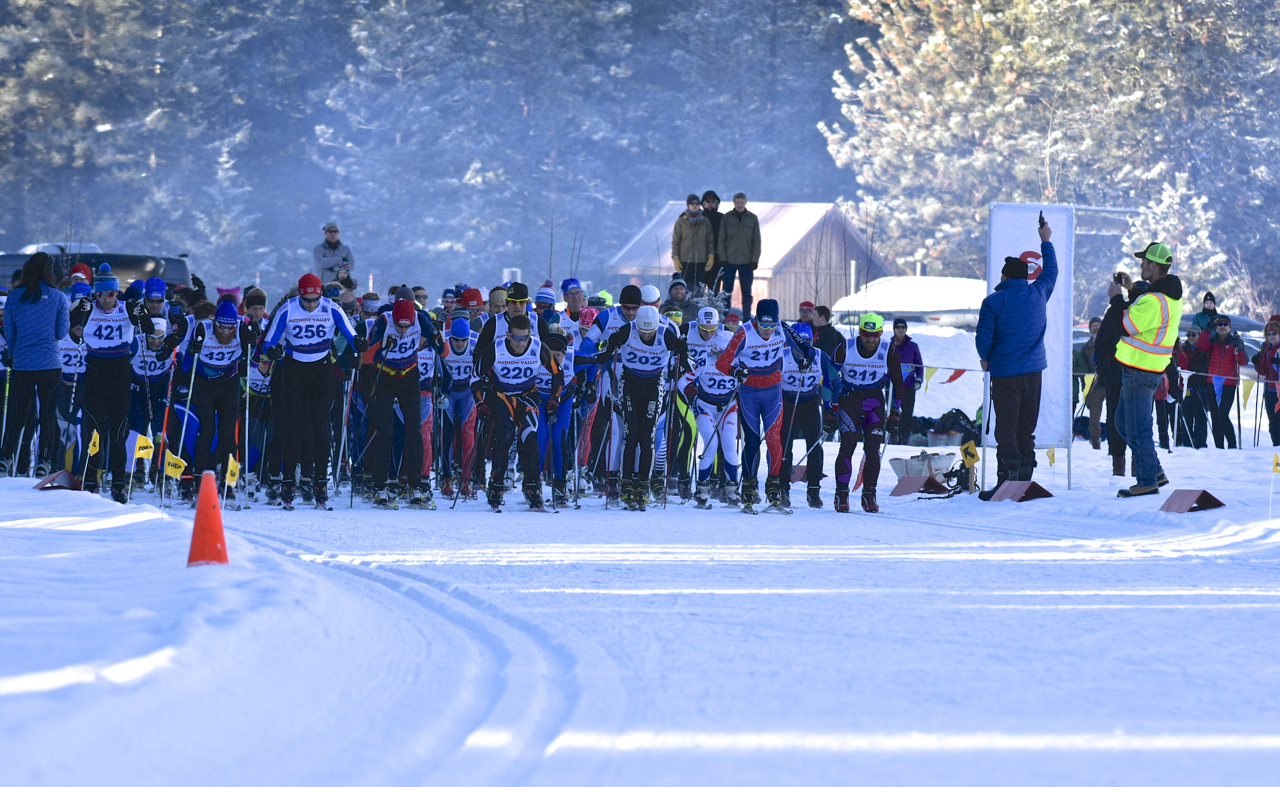 Ready, set, go: racers at the start of the skate portion of the 2018 Methow Pursuit. (Photo: Methow Trails)

Washington’s Methow Valley is the literal end of the road in winter. There’s one way in from the south.  There’s route 20, a sinuous side spur plunging down from Omak in the Okanogan Highlands to the Methow’s eastern edge. Otherwise, travel by car terminates just beyond Mazama — the small town nestled in the valley’s north.

The Methow’s charm remains its solitude and mellowed pace. Despite the wifi and cell service, there’s the real sense of being unplugged.

For nordic skiers, that remoteness coupled with the Methow’s epic skiing make it paradise. Regionally, it’s hard to argue any other nordic ski destination matches the raw number of kilometers, terrain, and vibe etched into the Methow’s DNA.

Despite those travel brochure-worthy qualities, the cadre of skiers residing in the region have struggled to create a signature cross-country race event. By signature event, we’re talking races like Sun Valley’s Boulder Mountain Tour, Craftsbury’s storied marathon, and the behemoth American Birkebeiner which stands alone in terms of its draw.

“In the early 90’s is when I think the Methow Pursuit first started,” said Kent Murdoch, a long time Methow skier who bounces between homes outside Seattle and the Methow. “The first iteration of that long distance race was a point to point from Cub Creek, up and over the Rendezvous pass, and dropping down into Mazama to finish.”

“It was essentially a double pole race,” added Murdoch. “But it was pretty popular for the people that are established racers that knew about it.”

Periodically, stakeholders within the community have attempted to recreate the concept of a must-race event. In a place defined in winter as much as the Methow is by nordic skiing, one would assume a marathon type race there would be an annual pilgrimage for many.

That is not to say efforts failed. It is to say a rethink was due if success is measured by drawing a broad spectrum of the nordic community.

“I knew the event had struggled over the years and as I dove into planning for it, I quickly realized why,” said Adrienne Schaefer, the Partnership Manager for Methow Trails. “In an effort to have something for everyone, the event had grown into a somewhat complicated format, which was fine for skiers who were familiar with racing but seemed hard to navigate for someone who had never entered a race and didn’t actually know what a loppet even was. Numbers for last year’s Pursuit were close to 70 on Saturday and around 35 on Sunday. It was clear that something needed to change.”

“We had just completed our Sunflower Marathon, Half Marathon and Relay and had 1,100 runners at the event,” Schaefer said. “The question was, why not just do a winter version of the Sunflower?” 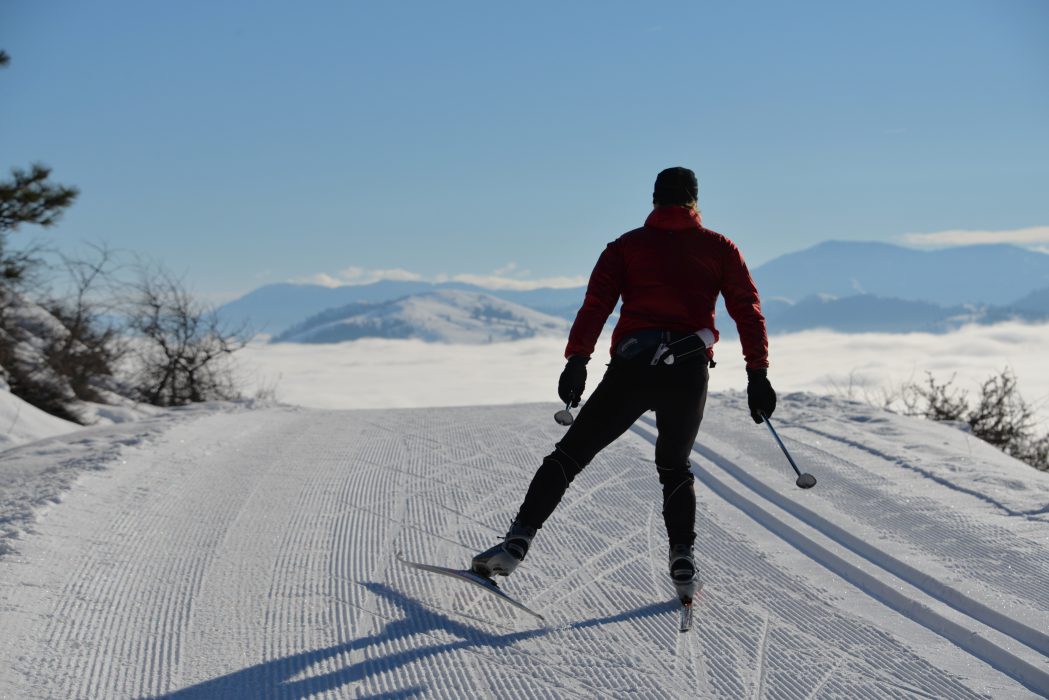 Skiing above the fog and under a big sky in the Methow Valley. (Photo: Methow Trails)

The Sunflower is a five-leg trail running race connecting Mazama on the valley’s north end to Twisp in the south. Participants have the option of running the marathon solo or as part of a relay team. Relay teams consist of two to five participants. The half-marathon starts near Mazama and shares the same finish as the marathon. The end result is a race with enough options to draw the hardcore and recreationist.

What Schaefer saw in the success of the Sunflower was its accessibility. A concept easily applied to the cross-country ski version of the event.

Murdoch was equally invested in formulating a successful winter-edition model of the Sunflower.

“The area really warrants putting something like this on,” Murdoch said. “A few friends and I have been envisioning this for a few years and I am now on the Board for the ski team. I Have taken this as my main focus to not just build this race but eventually a week-long festival with multiple events. We want to appeal to people of all ages and skill levels.”

On January 26, the Methow’s inaugural Ski to the Sun Marathon and Relay kicks off.

Valley local Laura McCabe, a timeless podium magnet and herself fond of burly skis, along with Murdoch worked to piece together a course appealing to all comers. Beginning in Mazama, the envisioned course runs a solid 40.6 k for individual skiers. The relay is broken into six segments – teams may have between two to six members.

For the first quarter, the race route streams the middle of the valley floor. At the end of the third leg, at 13 k, the course turns towards the west and trends to the rolling hills buffering the valley’s flanks. After approximately 28 k, the climbing begins towards the finish at Sun Mountain Lodge.

“It is very skiable,” Murdoch added. “There is nothing in it that is, I think, that is going to turn anyone away purely based on difficulty. And it doesn’t have the technical descents. So technically it should be doable for a very large group of people. And for the people that are not interested in the climb, it is possible to get on a relay team. I think some of the legs are only 2 to 3 kilometers and are totally flat. So there is something for everyone.” 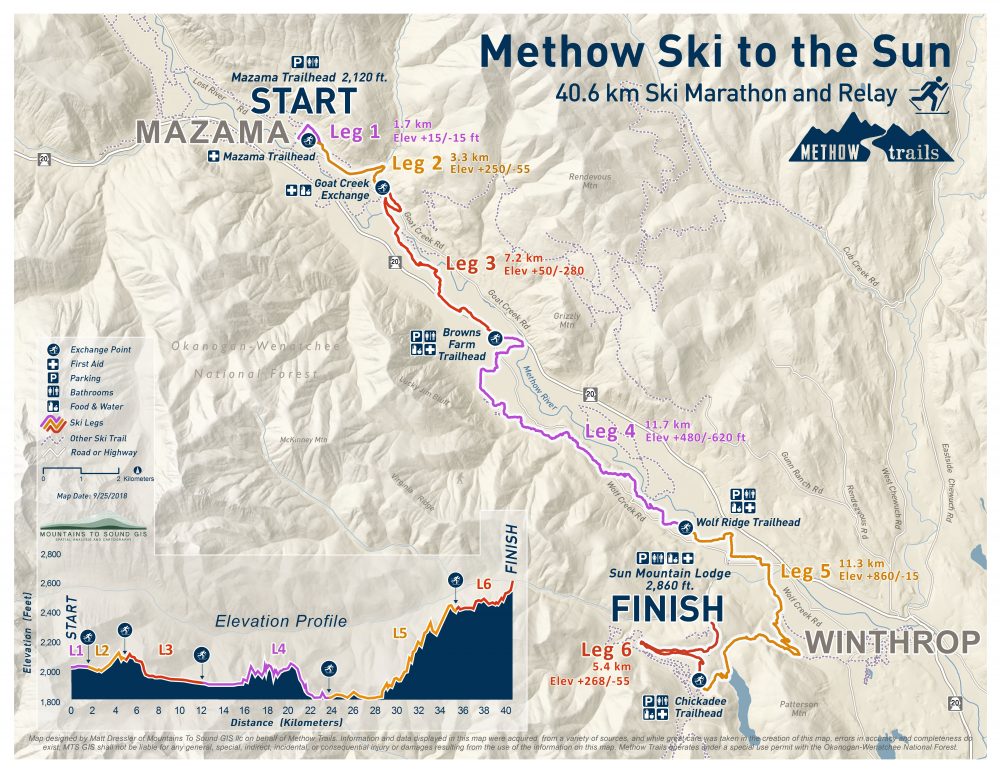 Course map and profile : Methow Ski to the Sun Marathon and Relay.

For skiers on the sharp end of the race, keen on fast splits and podiums, Murdoch believes the race will deliver. For those with an affinity for warm drinks and food as they tick off kilometers, organizers plan to staff numerous feed zones along the course to keep participants comfortable. In an appeal to families, racers 17 and under race for free.  The race is freestyle technique, but skiers may skate or classic.

“We know this is not going to happen overnight,” Murdoch said of the Methow’s desire to cement itself on the race circuit with the Ski to the Sun Marathon and Relay. “The basic answer to why we lack a signature event is that I don’t think we ever set out, in the beginning, to envision a course and the post-race dinner and award ceremonies and marketing especially. This is new to all of us. How to go about that. In previous years it was never really intended to be that kind of event. Now we have the energy.”