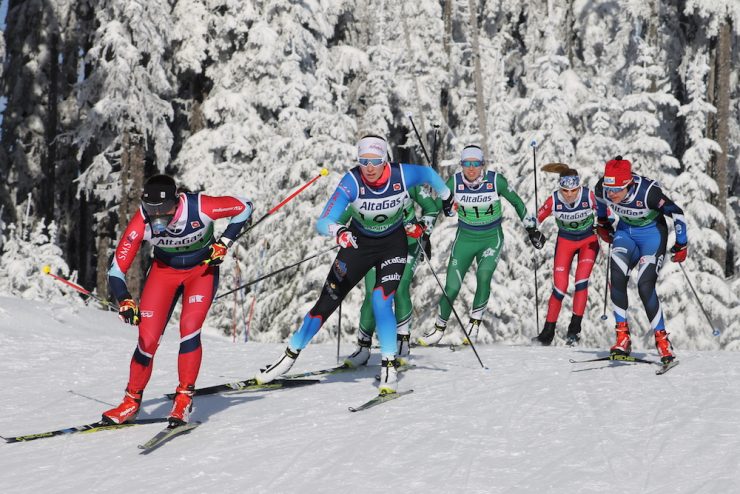 For the third consecutive year, the SuperTour and NorAm series met up at Sovereign Lake near Vernon, BC, for a combined race weekend of skate sprints and classic interval starts. Over 450 athletes competed each day in four age groups.

According to many attendees, combining the two Continental Cup series was an unqualified success. While many of the skiers expressed their pleasure in interviews, one quote stood out.

“The SuperNoram is the best idea ever.” — Sam Hendry

The skate sprint course ran fast, with no new snow since Tuesday, ski speed on Saturday was faster still. The NorAm/SuperTour in Sovereign Lake has had classic sprints for the past few years. This iteration of the event was different since the organizers tested a new skate sprint course in advance of the 2020 Canadian Nationals. The jury selected a 1.2km variant over the 1.4km course option for race day. With no new snow for several days, even -9C air and -12C tracks resulted in fast glide. The end result was fast times, ranging from 2:15 minutes for the open men to 2:55 minutes for the junior women.

“Felt good in qualification.” — Andy Newell described his day to FasterSkier in this video interview. 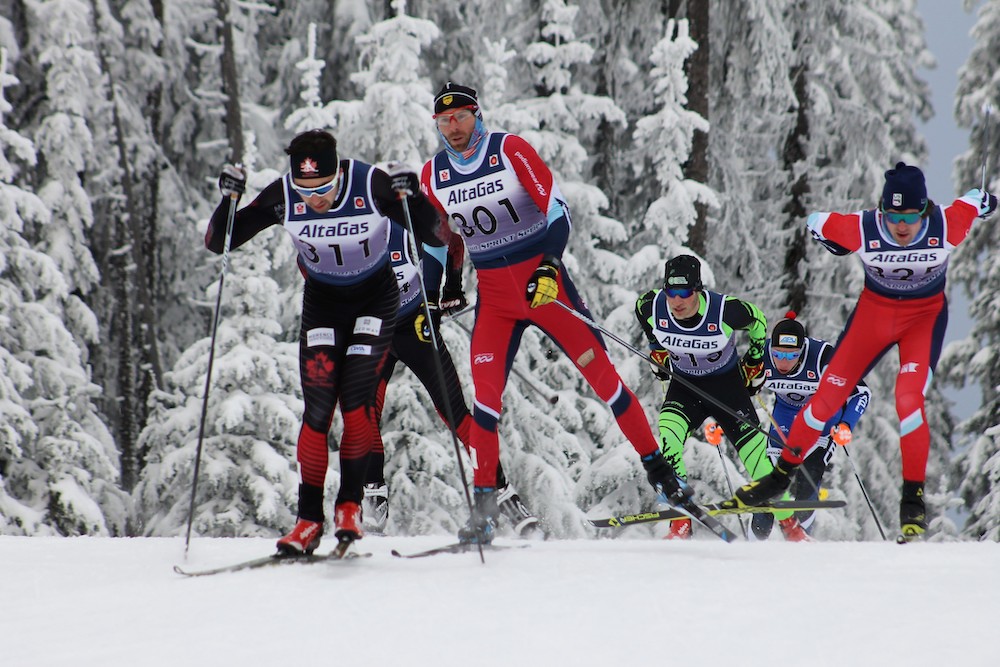 Newell led from the start in his quarter and semi-finals. In the final, Antoine Briand (CNEPH) pushed from the start after placing second to Newell in the first two rounds. However, the end result was the same. Briand pulled Newell away from the pack and Newell gapped Briand in the final 200m to take the win. Ben Saxton (SMS T2) took the four-up sprint for third, placing ahead of Hanneman, Antoine Cyr (CNST), and Ben Lustgarten (CGRP).

Julia Kern (SMS T2) had a similarly dominant day for the women, winning the qualifier in 2:40.54 minutes, 3.52 seconds ahead of APU’s Hailey Swirlbul and 3.69 seconds ahead of Hannah Halvorsen (APU). Dahria Beatty (CNST) was Canada’s top qualifier, placing sixth, 7.36 seconds back, after she fell on the first corner.

Kern won each of her heats comfortably, but the exciting action was in the pack. In the semifinal, Rosie Frankowski (APU) and Swirlbul hit the deep snow outside the course while attempting a slingshot from the back on the final ‘hole’ corner, a fast turn from the long downhill leading into a steep climb to the finish straight. There were a number of broken poles and minor crashes on that corner, but only those two left the track entirely. 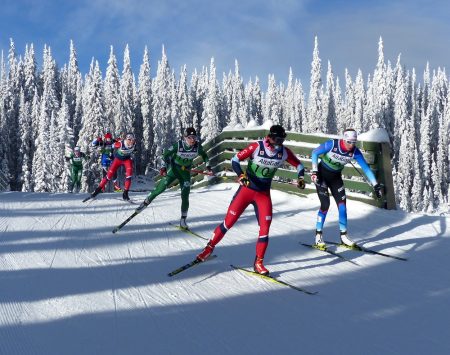 Julia Kern squeezing Dahria Beatty over the bridge in the A final. (Photo: Peggy Hung)

In the A final, Kern earned a gap on the final corner, leading a train of Beatty, Lauren Jortberg (Dartmouth), and Maya MacIsaac-Jones (CNST) to the finish. Halvorsen trailed in alone, followed by Erika Flowers (SMS T2) who broke her pole.

On Sunday, the classic tracks were glazing with -6C air and -10C snow at very high humidity. Many teams picked a hard over soft grip wax combo as no significant snow fell until the end of the race day. While a number of skiers needed to get out of the track in the final ‘technique zone’ climb on the last lap, it appeared that the issue was more often tired legs than lost grip wax.

The classic distance races were much tighter than Saturday’s sprints, with some nail-biting finishes for the coaches. 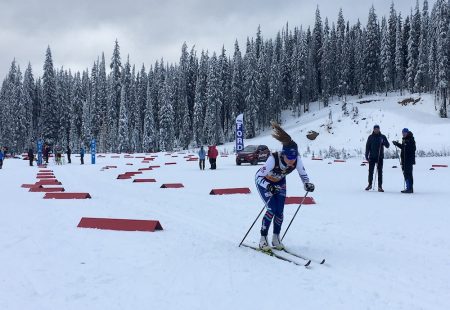 Katherine Stewart-Jones (CNST) attacked from the start of the two-lap interval start race and hung on to win in 31:48.4 minutes. Her 15:30.7 minute split for her first lap was the fastest by 17.1 seconds, allowing her to keep the win despite a fifth fastest second lap. Becca Rorabaugh was second fastest on the first lap and third fastest on the second lap to take 2nd overall, 7.1 seconds back.

Kern closed to 0.7 seconds behind Rorabaugh to take third place, while Swirlbul skied the fastest second lap to just miss the podium, 10.9 seconds behind Stewart-Jones and 3.1 behind Kern. Beatty was fourth at 26.7 seconds and first-year senior Hannah Mehain was ninth overall and the third Canadian.

In the men’s 15km classic, Kyle Bratrud (SMS T2) edged out Lustgarten by 3.8 seconds to win in 41:59.3 minutes. Ricardo Izquierdo-Bernier, representing the University of New Mexico and CNEPH, put Canada on the podium in third place at 34.7 seconds back.

Junior skier Samuel Hendry (CJNST) edged Newell by 0.4 seconds to take fourth at 1:13.7 minutes back. Bob Thompson (TBay) was the third Canadian in seventh, 1:20.1 minutes behind, confirming his distance progress after a disappointing sprint day.

Almost everyone in North American skiing came to the party. Jess Cockney and Olivia Bouffard-Nesbitt were seen testing skis for their teams. Bryan Fish was watching on behalf of the US team and shared his thoughts on international cooperation. New Canadian national team coach Erik Bråten offered his first impressions of Canadian racing. Follow the links below for all the video interviews.

Novie McCabe with a big lead in the final straight. (Photo: Kent Murdoch)

Andy Newell on his way to 5th. (Photo: Peggy Hung)

Brian Gregg had his Methow family out watching this weekend. (Photo: Peggy Hung)

Ian Torchia on his way to 7th. (Photo: Peggy Hung)

Julia Kern leads Dahria Beatty into the finish of the A final. (Photo: Peggy Hung) 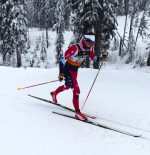 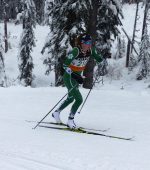 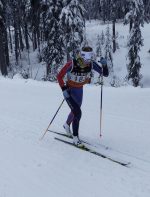 Remi Drolet wouldn’t repeat as junior winner but still managed to be 13th in the open category. (Photo: Peggy Hung)

The stadium in action. How many people do you know? (Photo: Frances Weekes)