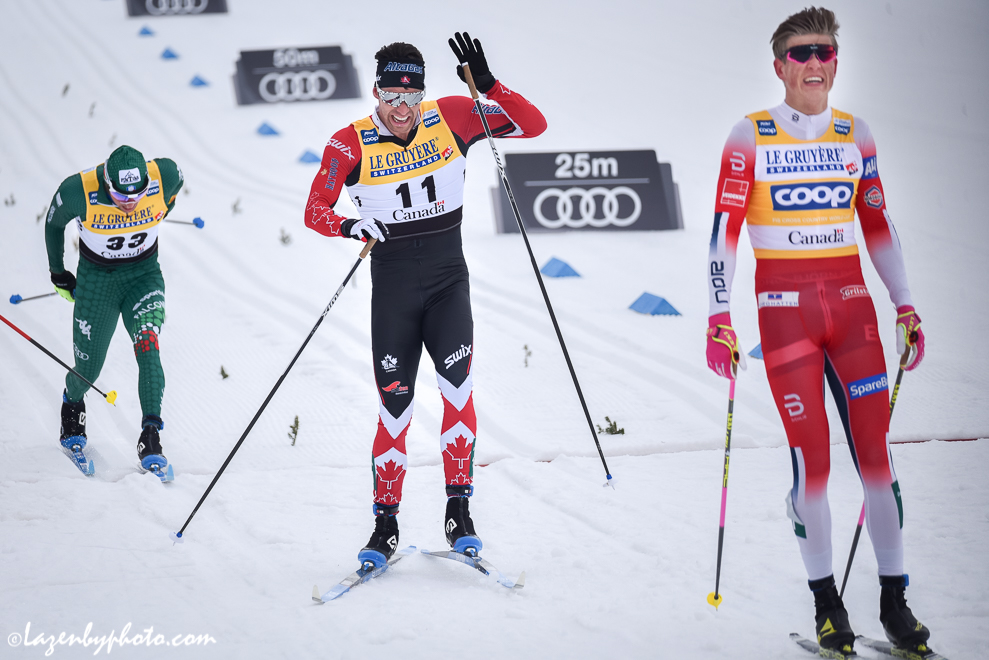 Thanks to his win in Friday’s freestyle sprint, Norway’s Johannes Høsflot Klæbo lead Saturday’s 78 starters out of the gate, his yellow bib also indicative of his first place rank in the 2019 Overall World Cup Standings.

With Saturday and Sunday being the last competition days of the World Cup season, and only 24 points separating Klæbo’s first place (1443 points) from second place Alexander Bolshunov of Russia (1419 points) in the Overall Standings heading into the 15 k on Saturday, both athletes were looking for a win. Klæbo to solidify his position on top and Bolshunov to supersede it. 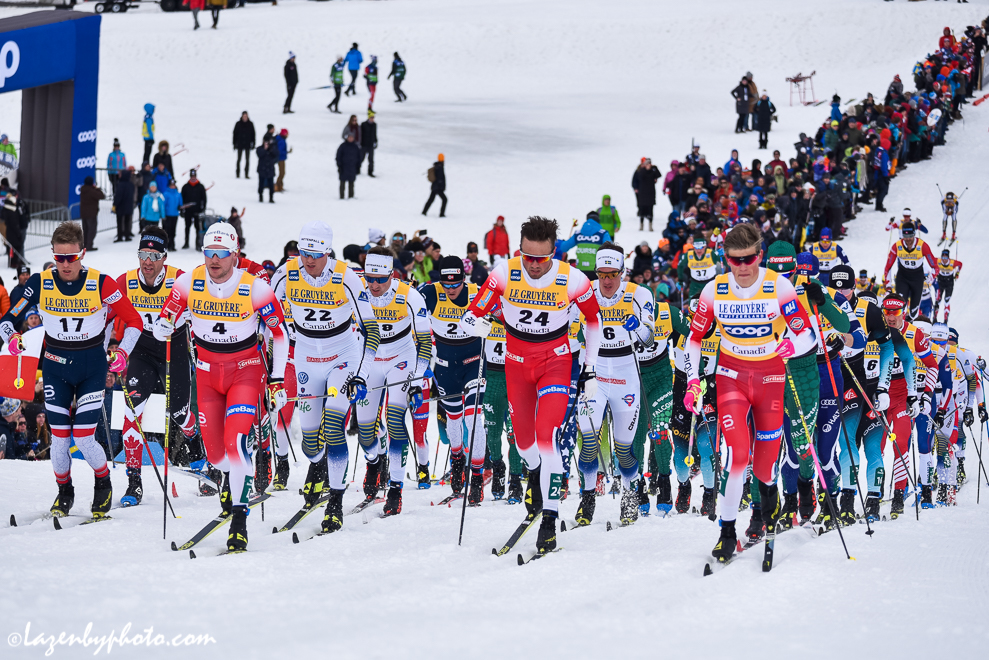 A literal mass of skiers after the start of the men’s 15 k mass start classic in Québec City. (Photo: John Lazenby/lazenbyphoto.com)

Leading up to 10 k, it appeared as if Bolshunov was on track to overhaul Klæbo’s immutable position on top. The Russian had positioned himself at the front of the lead pack’s 13 skiers which included Klæbo, Harvey, Italians Federico Pellegrino and Francesco de Fabiani, Russian Andrey Larkov, Switzerland’s Dario Cologna and Norwegians Didrik Tønseth, Sindre Bjørnestad Skar, Emil Iversen, and Sjur Røthe.

Taking charge through the climbs, Klæbo and Bolshunov went stride for stride, with Harvey hard pressed a little more than 1 second behind.

“I didn’t want to be leading because it was windy but I wanted to be near the lead every time,” Harvey told FasterSkier after the race.

Their descents through the tight sugary s-turns were maneuvered with ease. At 12 k, a Klæbo versus Bolshunov battle had directed most of the race and seemed fated to the finish.

However at the 13 k mark, halfway up one of the course’s major climbs, the bottom of Bolshunov’s right pole snapped. Although he received a replacement pole within a meter or so, the broken one did damage to his pace. 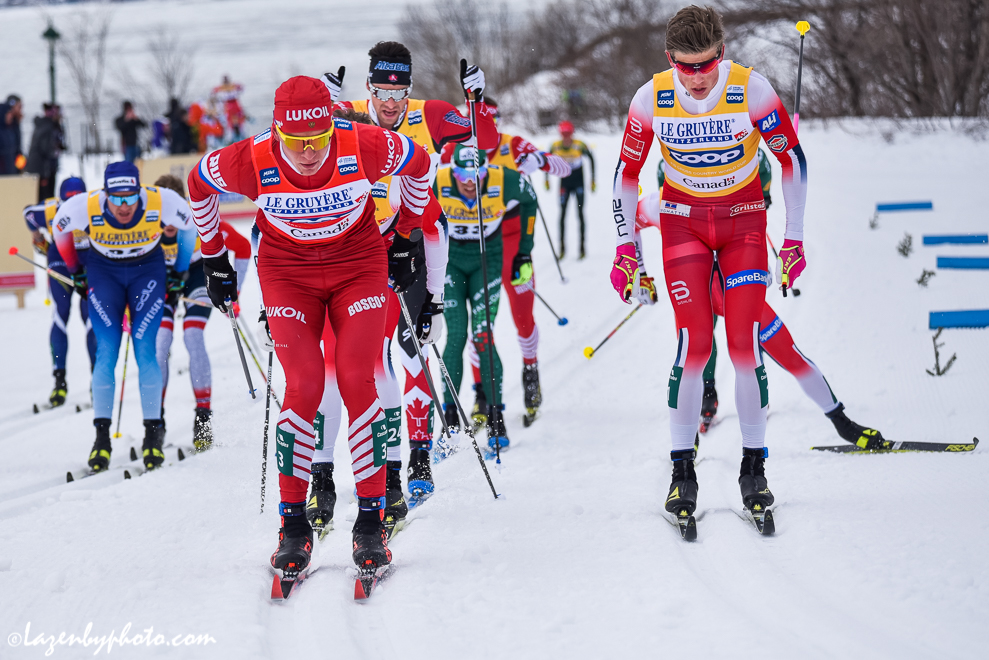 “When I heard the Russian broke his pole, I went all in for Klæbo to make a gap as big as possible,” Tønseth told FasterSkier after the race. “We went for Klæbo and that’s the most important thing.”

With Tønseth pushing the pace, Bolshunov began to fall back. By the bottom of the next descent, the lead group had dwindled to five: Tønseth, Klæbo, de Fabiani, Røthe, and Harvey.

“We started to stretch the pack and…Didrik [Tønseth] is the strong guy that can make a hard drive in the final 2 kilometer to the finish he’s better than Johannes [Klæbo] or me in that so it was almost fun for him, if you want to be on the podium you got to punch it hard now and I knew for me it was going to help me,” Harvey said.

For the remaining 2 k, all five skied together until the finishing stretch. In the final 100-meters to the finish, Klæbo moved to the front and held off the charge of Harvey and Tønseth. Klæbo crossed first in a time of 36:10.9, while Harvey claimed second, just 0.8 seconds behind Klæbo, after a last minute surge past Tønseth.

Two years ago, World Cup Finals were also held in Québec City with Harvey coming into that weekend ranked third in the Overall Standings and having just won his first individual World Championships gold in the Lahti 50 k.

“It’s a different scenario than two years ago when I came in newly World Champion fighting for the top three in the overall, I feel like this time I’ve had a harder season, was a bit more of an outsider,” the 31-year-old Harvey said. So I knew I needed my best race of the year to be on the podium and I was able to do that today so it’s pretty special.” 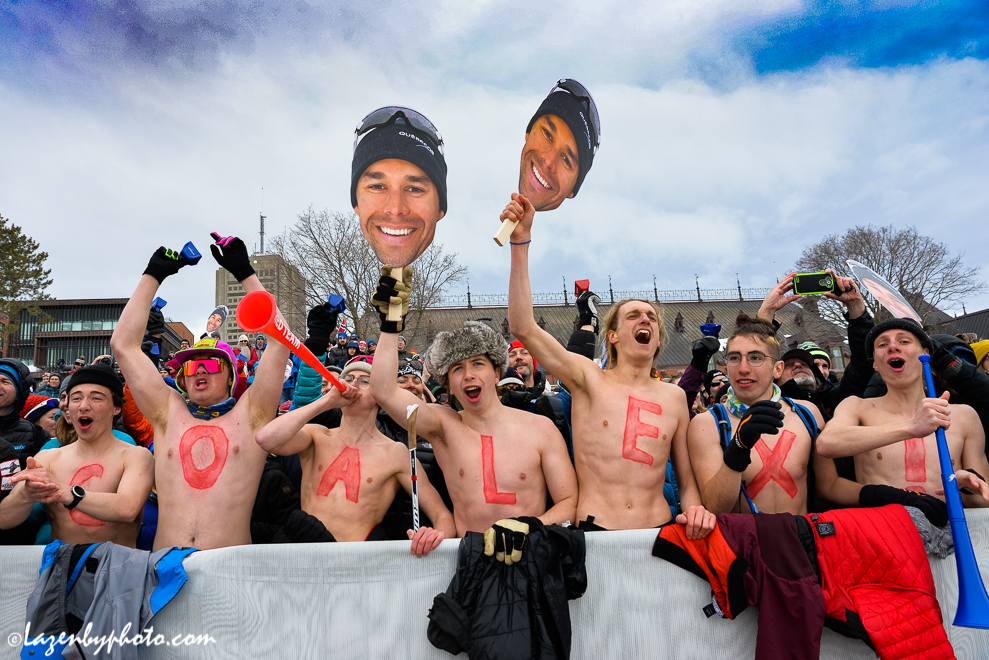 Harvey confirmed earlier this season that World Cup Finals in Québec City will be the last World Cup races of his career. The Canadian will now start Sunday’s pursuit less than a second behind Klæbo.

“I felt strong today so I was able to come up in the front again. I needed these points for the total World Cup,” Klæbo told FasterSkier after the race.

With Saturday’s 15 k complete, Klæbo retained his top spot in the Overall Standings now with 1493 points. Bolshunov is currently second with 1451 points and Røthe third with 892 points.

“I’m happy with the result,” Bjornsen told FasterSkier after the race. “I think it might have been the first time I was leading a World Cup for a bit. ”

Around 4 k, Bjornsen was at the front of the 78 skiers who started the race.

“The way my season’s been going it feels easy to go at race pace but when there are surges in the pack, if I try to go I just flood and I can’t really recover the way I’m hoping. But that was fun today,” Bjornsen said.

“It was one of the best distance races of my career,” Valjas told FasterSkier after the race. “I’ve had a few really good ones, but I don’t think I’ve ever been near [Top] 30 in my career other than the two podiums. So I’m super happy. Alex had a great day. I feel like I had a great day and I’m looking forward to tomorrow.”

“I was in bib 69 and I was skiing with some guys who were in the Top 20, so it’s really exciting for me to feel sort of back again,” Valjas added.

Following Valjas was the USST’s Simi Hamilton in 39th (+2:13.7). After the race, Hamilton indicated that prior to Saturday, his most recent classic distance race had been the Lillehammer 15 k back in December.

“I think by far the hardest part about today was the poling,” Hamilton told FasterSkier after the race. “It was just super rotten everywhere, the tracks stayed firm, which was nice, but the poling trenches just got so deep. I was constantly trying to look for harder snow on the outside and it made for, as a bit of a heavier skier, it made for a tricky 15k, but it was fun.” 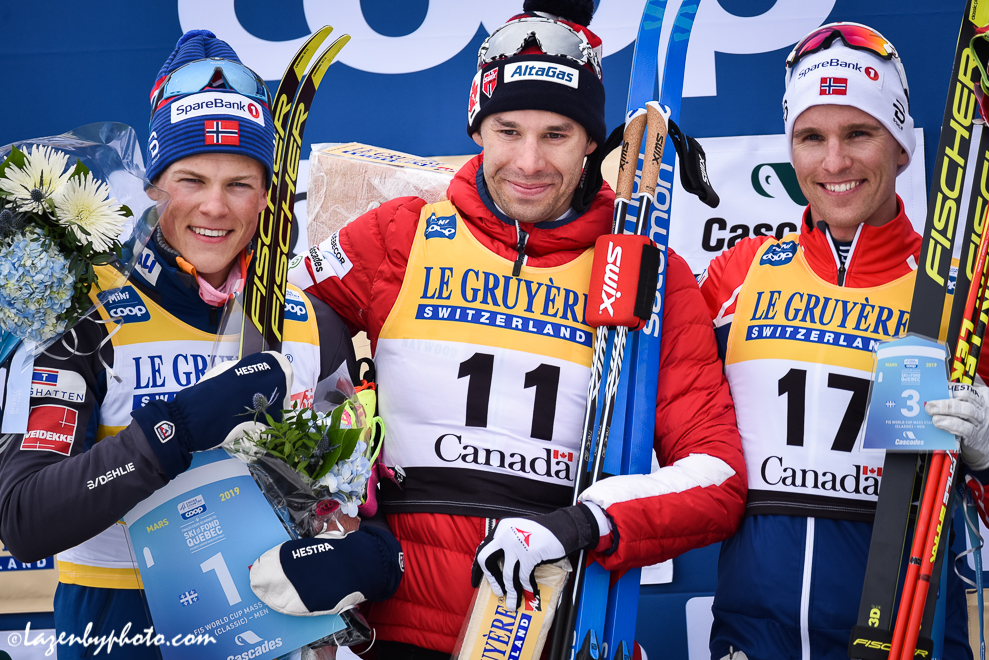 The men’s podium from the 15 k classic mass start in in Québec City. Alex Harvey (bib 11) was given the honor of standing in the center. Harvey placed second to Johannes Høsflot Klæbo (left). Third place went to Didrik Tønseth (bib 17). (Photo: John Lazenby/lazenbyphoto.com)