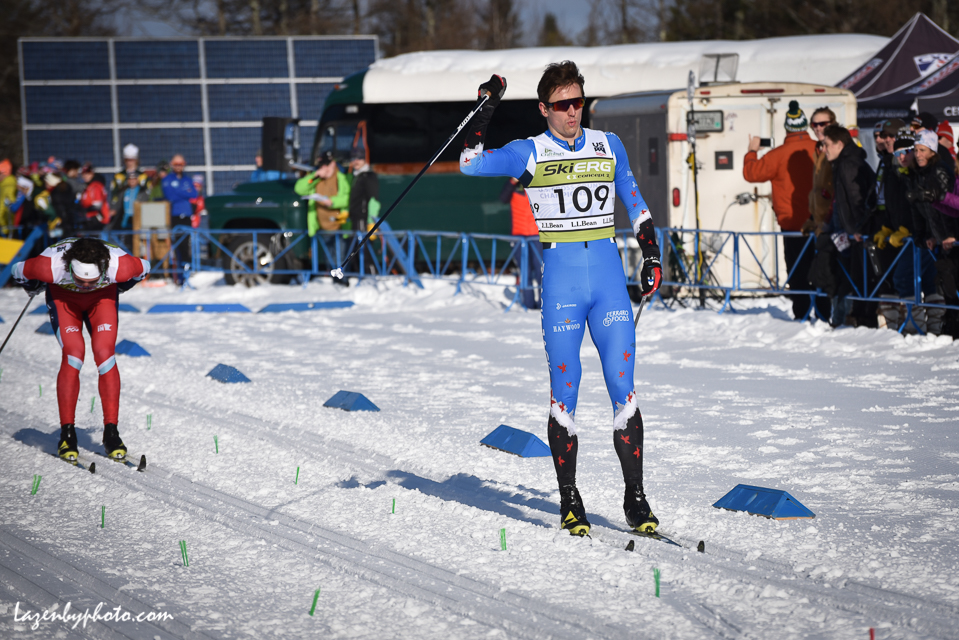 With the thirty men who qualified for the men’s classic sprint heats on Friday in Craftsbury, VT. winnowed down to six in the final, Ben Saxton had already made made his mark in the quarterfinal.

The SMS T2 skier laid down the fastest qualifier in 3:18.58 minutes. He won his qualifier ahead of second place skier Zak Ketterson (who eventually made the finals as a lucky loser) and faced down with fourth fastest qualifier, Logan Hanneman (APU) in the second semi. Hanneman bested Saxton by less than one tenth of a second as they moved on to the final.

The second semi was won by Canada’s Julien Locke. Locke began his day qualifying in ninth, then won his quarter and semi as he advanced. He also established a pattern of skiing faster as the day transpired. He won the quarter in 3:21.79; his semi in 3:17.84.

In the final, Locke notched up his speed enough to beat both Saxton and Hanneman for the win. He stopped the clock in 3:15.46. Saxton placed second, Hanneman third.

“I actually wasn’t feeling so great this morning so I wanted to be a bit calm in the heats,” Locke said. “And it was pretty obvious after the quarterfinal that that strategy was working because same thing there, I was a bit back at the start and then I could close down to the finish and I think a lot of guys were tying up because you know if you do a three minute sprint it’s a lot harder than doing a two minute sprint with a one minute warm-up, that’s kind of what I was doing today. I think it was just reinforcing that the first half of the course wasn’t very important.

“The final was fun,” Locke continued. “I started a little bit slow the other guys were really pushing off the line and I was dropped by a bit, but I just hung in there and stayed within contact. And then I knew that I was stronger on the climb so I just waited until the technique zone and then I put the hammer down and skied harder into the finish.” 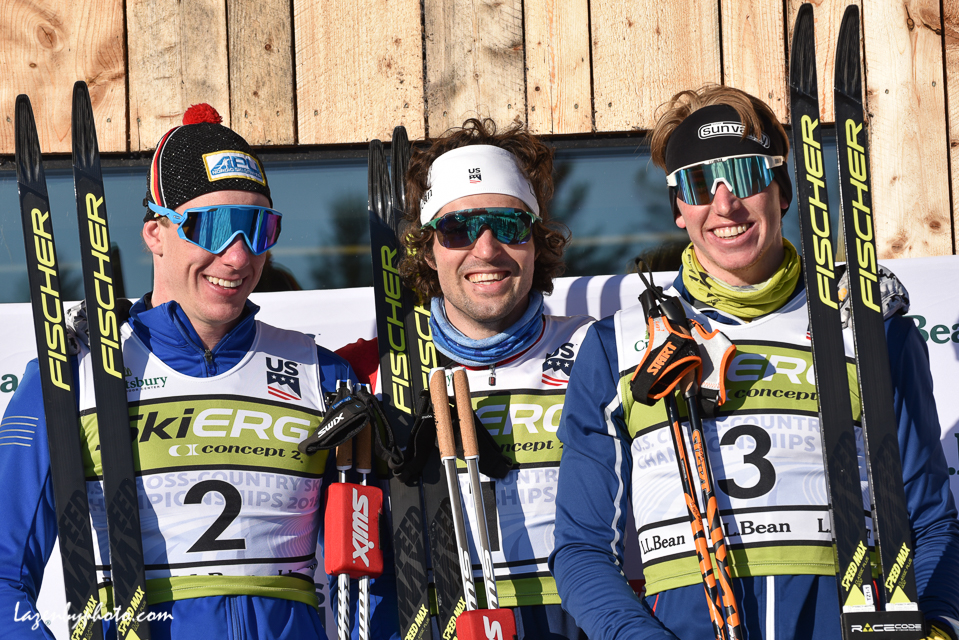 Saxton claimed the U.S. national classic sprint championship as the first American across the line, with Hanneman in second, and Holmes third.

For Saxton, it was his fourth U.S. nationals sprint podium but his first national championship. Saxton placed second in 2014 and 2015 nationals, a skate and classic sprint respectively. Last year, at nationals in Anchorage, he placed third in the classic sprint.

“The final was really fun, the sun was out for most of the heats so we were all in a pretty good mood,” Saxton said to FasterSkier in Craftsbury. “It was a good clean race, everybody came through the technique zone pretty tight. The Canadian Julien Locke grabbed a meter or two at the end. And I couldn’t quite grab him at the end but I had my hands full running from Logan Hanneman anyway. He’s one of the fastest finishers we’ve got.”

“The final was pretty similar to the semi in that Ben and Zak Ketterson really took it from the gun,” Hanneman said after the race. “They controlled it out of the start, but after the quarterfinal, I kind of decided to hang back until the uphill because there’s a lot of time to be made over that uphill and into the finish. Those guys went out hot [in the final] and I was just behind them and Julien was behind me somewhere and we all came into the uphill kind of four abreast. I was in the far right track, then the striding came and yeah we closed that gap up to Ben and Zak [Ketterson]. Julien made his move kind of over the top of the uphill on the inside and I was far outside and there were people in the middle — he made it at the right spot. It was a fun race. Coming up here into the finish with all the crowd right here on the side and the sun, it was pretty nice.”

Holmes was the third American as he earned his first career U.S. national’s podium. The twenty-two-year-old Holmes graduated from the University of New Hampshire last year and is in his first year with the SVSEF Gold Team.

Pre-race favorite Andy Newell qualified in third after double poling the classic course on skate skis. Newell did, however, stride on his skate skis through the required technique zone.

Newell initially placed second in the fifth quarterfinal but was later suspended for interfering with a competitor causing them to fall.