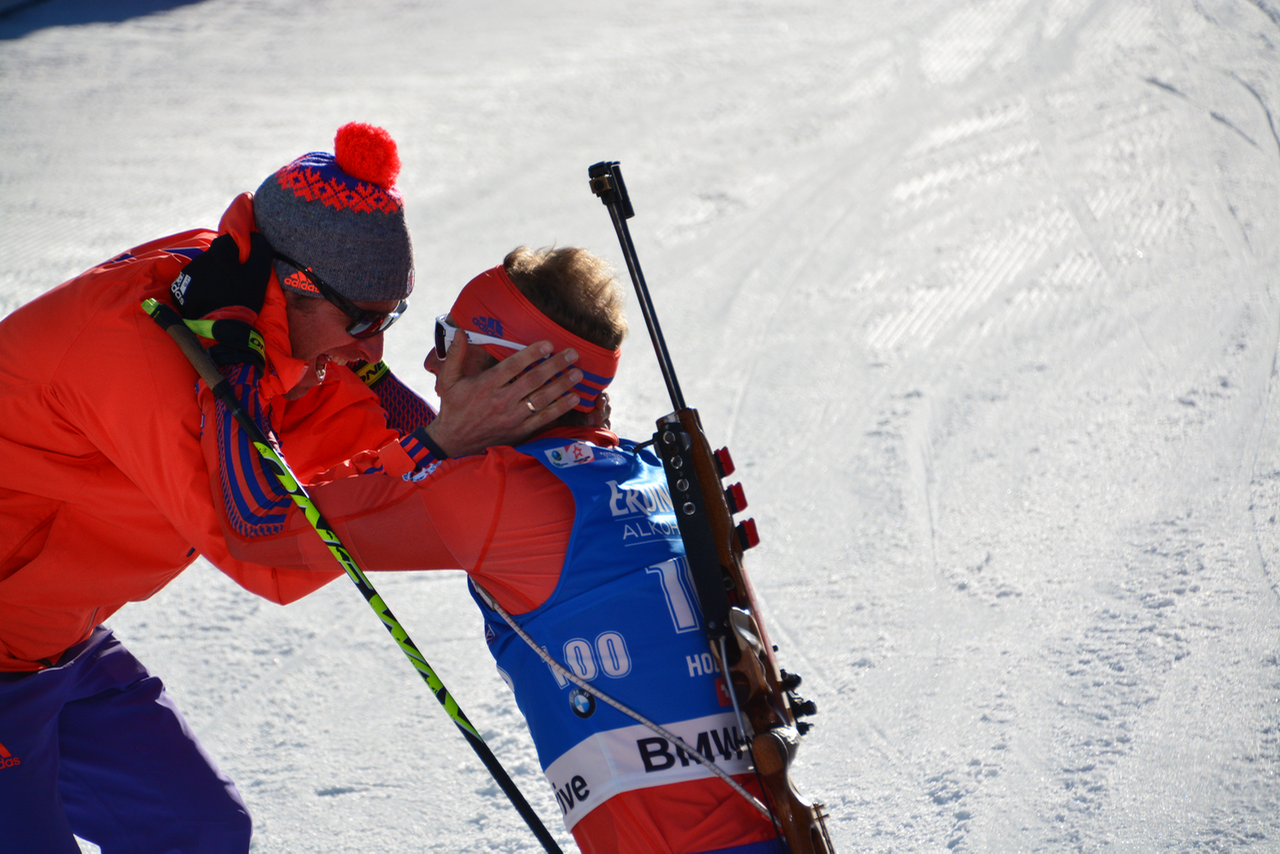 “Twenty years and two months ago I began with US Biathlon,” Bernd Eisenbichler said to FasterSkier last week during a phone call to discuss his March 31, resignation as high performance director.

For those of you unfamiliar with the name, Eisenbichler has worn many hats during his tenure with US Biathlon: Ski/wax tech, high performance director, and chief of sport. With a title like chief of sport, more fitting head-ware might have been a crown. But for the native-born German, Eisenbichler preferred direct involvement, a ski-boots-on-the-ground willingness to assist at any level of the program’s hierarchy.

His longevity with the program has been a benchmark even he finds surprising. Asked if he intended on steering the U.S. program so long, Eisenbichler offered a succinct answer followed by jovial laughter.

Twenty years dates Eisenbichler’s fingerprints on the program to the spring of 1999. Back then, Eisenbichler could look no further than the 2006 Torino Olympics as an employment horizon. After which, he explained, he expected to reassess his commitment.

“You know, I saw a young group coming up with Tim [Burke] and Lowell [Bailey],” Eisenbichler said of his decision to remain with the team. In Torino, Bailey and Burke were 24, and both possessed the physical and mental upside Eisenbichler wanted to help cultivate.

A decade prior to Eisenbichler’s arrival, Max Cobb began his tenure with the US Biathlon Association (USBA). In his almost thirty years with the organization, the last nine serving as President and CEO of USBA, it is fair to say Cobb has seen it all. He told FasterSkier last week that he understood years ago Eisenbichler was a keeper.

“Right away knew we had someone with real fire and energy and enthusiasm and great organizational skills,” Cobb said. “Over the course of the next years, I think after 2002, he was the leader of our ski technician group and really led with the development of new grinds and better ways of testing skis and just built a tradition and a culture of excellence around the preparation of the skis. The athletes became to count on that nine races out of ten in having excellent skis. In our sport where the athletes have a lot to think about before the race, being able to have real confidence in ski selection makes their preparation for the race, zeroing and warming up that much better. That was only the beginning of Bernd’s contribution to the sport. Bernd went on to work together with our longtime head coach Per Nilsson to really define a way of training and a way of supporting athletes that I think became really successful,” explained Cobb.”

Eisenbichler became high performance director in 2007. Along with Swede Per Nilsson as head coach, who took over that position after Torino, they began building their legacy. Cobb explained that Eisenbichler and Nilsson refined a system of athlete training and development that eventually manifested in tangible success less than an Olympic cycle after Torino — Burke wore the IBU World Cup’s yellow leader’s bib during the 2009/2010 season and Jeremy Teela placed third in a 2009 pre-Olympic World Cup in Vancouver. Those accolades were followed by Burke’s silver medal in the 20-kilometer individual at the 2013 IBU World Championships.

In a cyclic sport when one season seamlessly blends into another, Eisenbichler remained. Let’s not fool ourselves. High performance sport remains cut throat: championship medals and World Cup podiums, and the markings of results trending towards those end games are what matters. Had Eisenbichler not delivered, he most likely would have been out.

Burke and Bailey became consistent performers. Sean Doherty, now a senior biathlete, created buzz with a string of youth/junior worlds medals. Susan Dunklee, became the face of an emerging women’s program. She remains a podium threat skier. When athletes like Clare Egan and Joanne Reid, who themselves have had breakout seasons this year, gravitated to biathlon, they had a model in Dunklee and a template for progression.

The 2017 IBU World Championships was the capstone for Eisenbichler. Bailey won the 20 k individual gold, and Dunklee won silver in the women’s mass start. 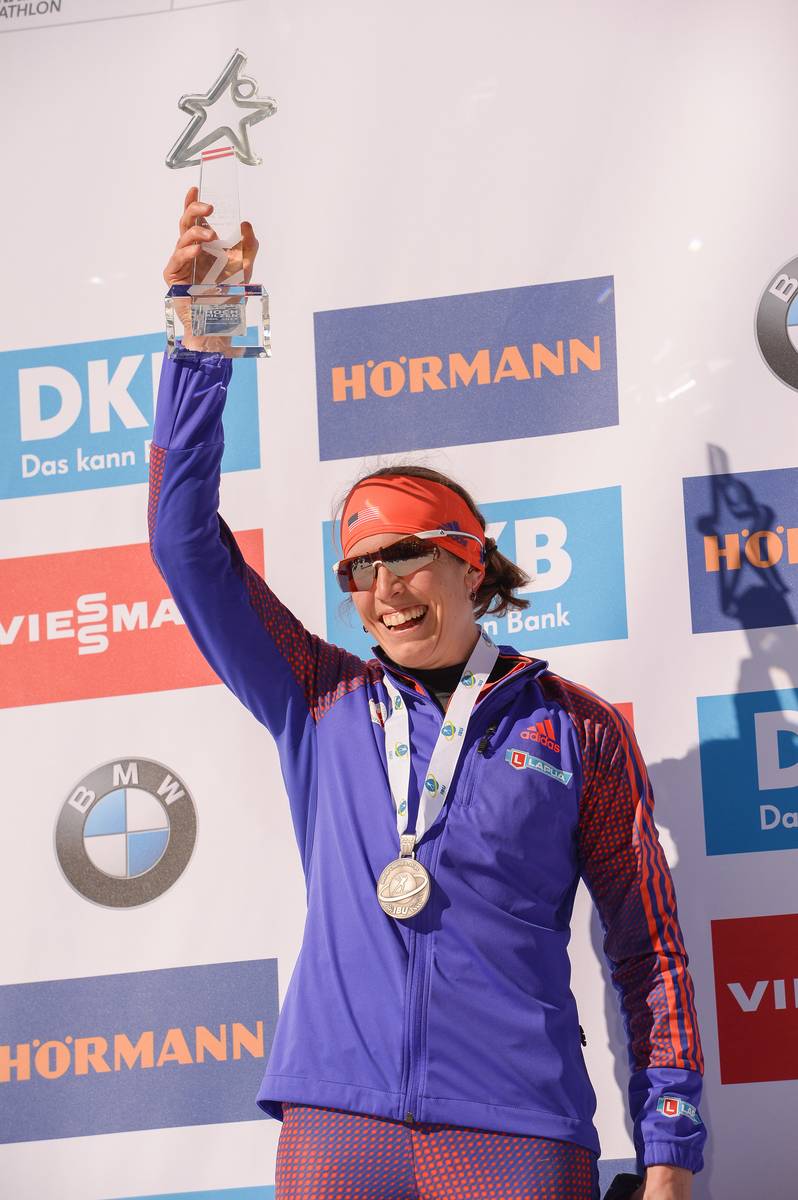 “Yah, in 2017 after Lowell won the gold medal and Susan won the silver, I was thinking like ‘hey maybe soon it is time’ you know,” Eisenbichler said about when he had contemplated moving on from the U.S. program. Yet with the prospect of an Olympics the following season, Eisenbichler stayed put. Then, post-PyeongChang, the team lost several coaches and began a reboot.

Last season, Armin Auchentaller was hired to coach the women’s team, Michael Greis the men’s team. Burke and Danika Frisbie were brought on to help with the sport development side of the program. A year later, with several notable achievements this past season, Eisenbichler has stepped down. “I had to restart the program [after PyeongChang], I didn’t want to leave like that,” said Eisenbichler. “Now it just feels like the right time. With Eisenbichler’s apogee in the U.S. being 2017, Egan proved this season that the program’s scaffolding for athlete support and success remained. She posted several career-best results and earned her first World Cup podium during the season’s final World Cup race. Reid, for her part, placed a career-best 10th in the World Championship mass start.

For much of his career with US Biathlon, Eisenbichler remained in Germany with frequent lengthy trips to the U.S. during the off-season. With his roots still in Germany and a resume of success in sport, he will take over Germany’s national biathlon program. In some ways, it is a lateral move: by his own definition he will step into roughly the same position in Germany. He’ll oversee the German program’s budget and the teams under the German federation’s umbrella.

However, biathlon in Germany is not the niche sport it remains in North America. It is prime time. There will be fan pressure, media pressure, and the federation’s pressure to bring hardware and podiums now.

“Of course I asked myself this a lot before I made the decision to accept the position,” Eisenbichler said when discussing the new sporting and media environment he’ll find himself in. “First of all, I have to say I like pressure quite honestly. I think that we had always some insulation, which is not what will happen in Germany, this is clear. This is very clear.” 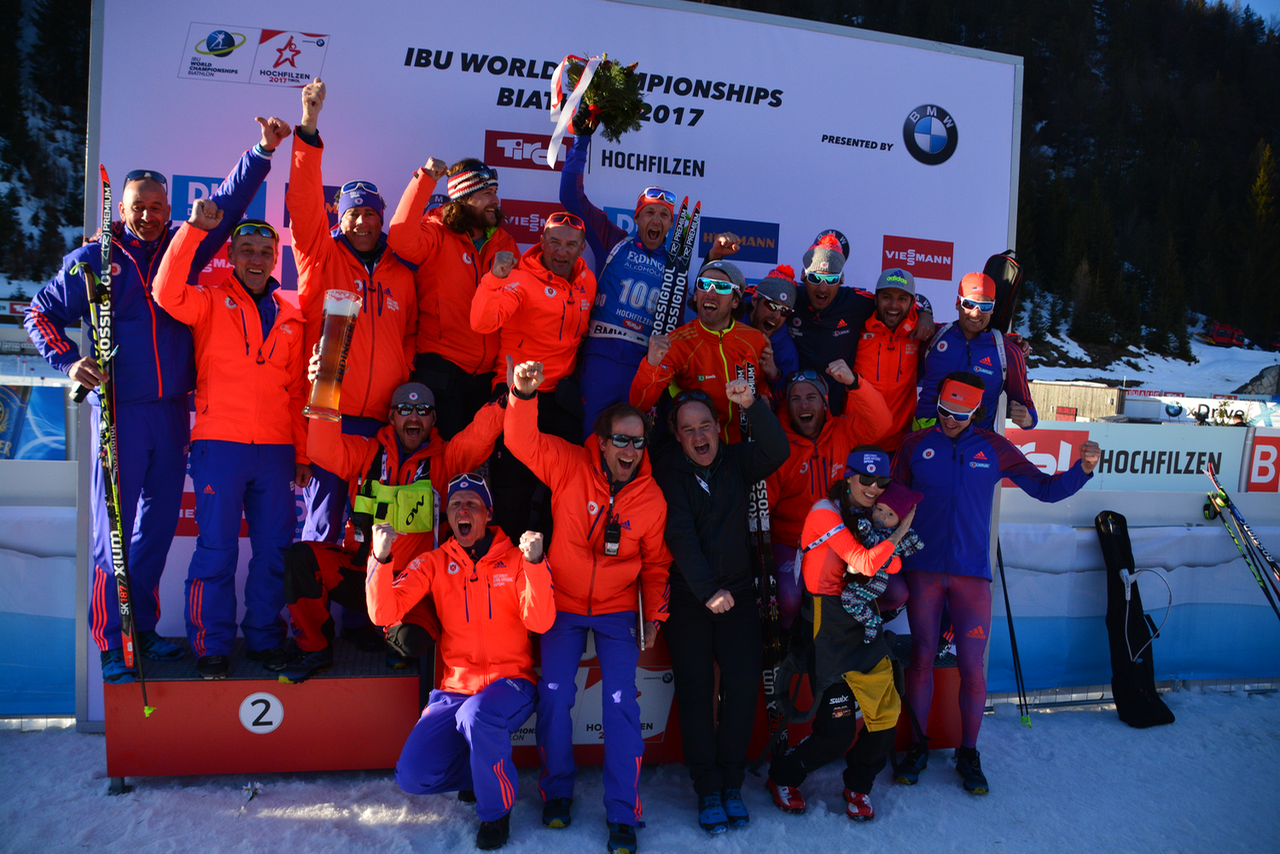 The U.S. men’s team, staff, and Bailey’s family celebrate on the podium after the flower ceremony. “Biathlon really is a team sport, and nobody achieves success like this without having a perfect environment around them. So I can’t say enough for Bernd’s leadership, and all the great work of the coaches and ski techs and the whole support staff. Because that’s what makes it possible. And we have been talking about it for a long time. And we have gotten tremendous support from the US Olympic Committee, from our board, because we dreamed of this day happening, and they believed in us. I couldn’t be more grateful for all that.” (Photo: Glen Crawford)

In as much as he is German, Eisenbichler will import an American biathlon lens when it comes to wringing value from his German budget. Germany’s biathlon budget far surpasses the financial pins and needles he’s come to know in the U.S., but he maintains he will seek efficiencies. Something he learned to master in the U.S.

Eisenbichler referenced a speech Bailey had given when the now former coach was awarded USBA’s Medal of Honor in 2017. Bailey honed in on the David v. Goliath mentality Eisenbichler brought to the program. The parable was do more with less.

“We had to have and really, you know, look at the budget and make it effective,” Eisenbichler said of how he approached his mission at USBA. “Really make smart decisions. Not to spend the money in the wrong places. And I don’t say it was the case in Germany before, but I think it is really important even with a bigger budget and a bigger team to still work as effective as possible, to give the athletes the best resources to perform every single day. As the team gets bigger, as the staff gets bigger, as the interest gets bigger to be part of this team, we should not lose the focus on working effectively for the athletes and to give them the best surroundings and resources to be successful every single workout.”

In any career spanning two decades, the human connections run deep. Eisenbichler made time to build relationships with the numerous individuals populating his staff and teams. Beyond those connections, Eisenbichler leaves a profound legacy. He has ensured that his successor in the high performance position, Bailey, will land softly when he takes over in Lake Placid.

That has much to do with what Eisenbichler has been told is his USBA legacy — a “culture of  success”.

“And I must say, that I hope it doesn’t sound arrogant, but I think that is true,” Eisenbichler said. “Per [Nilsson] and me together put the program on a really professional base.”

Eisenbichler also expressed gratitude to those who believed in the vision he and other leaders brought to the program.

“I will miss my team and my staff a lot. It is still emotional for me you can hear…so yah.”

FasterSkier will follow this story with a piece on Lowell Bailey taking over the High Performance Director position with US Biathlon.