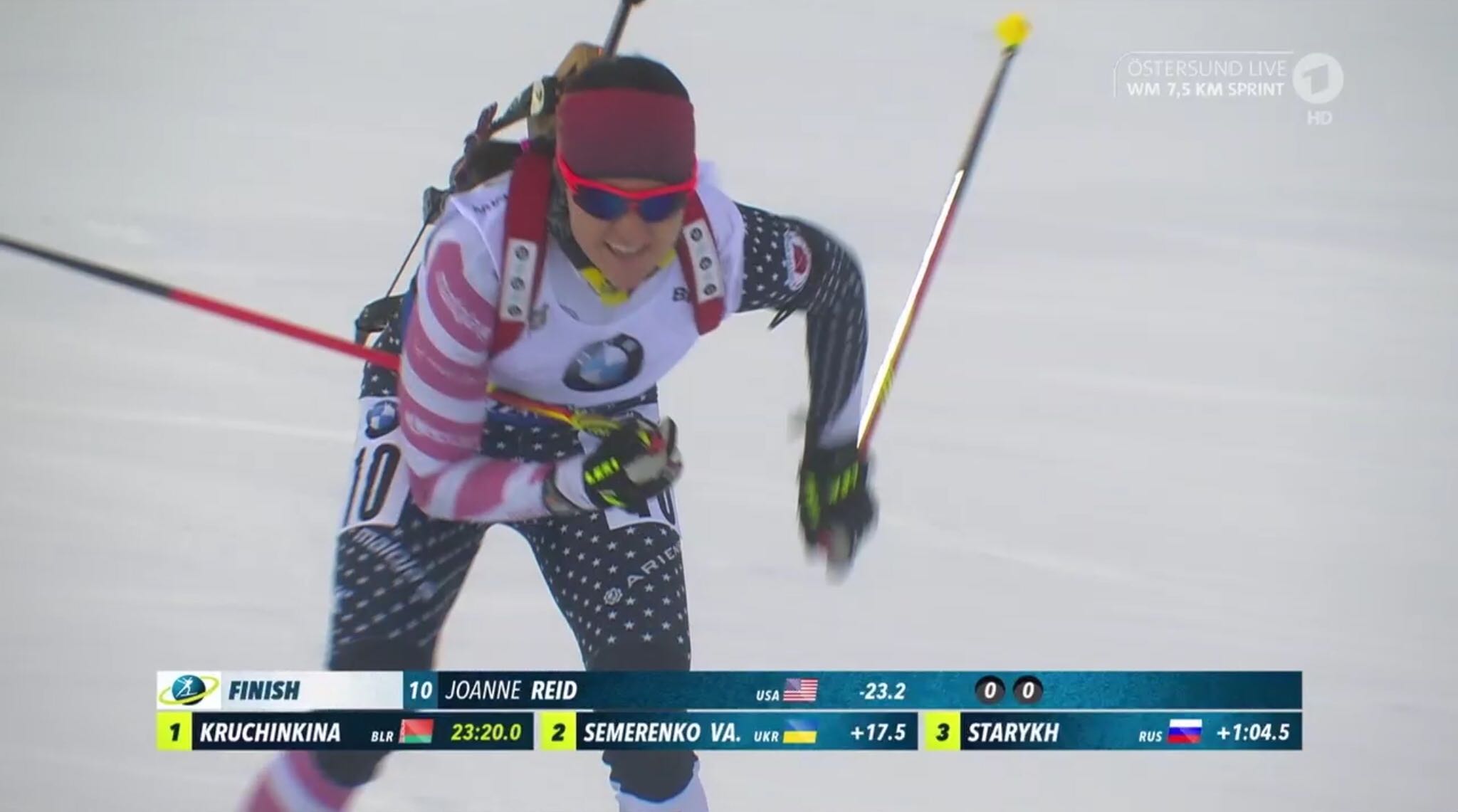 A World Championship. A career-best result.

For Joanne Reid of the US Biathlon team in Östersund, Sweden, the recently concluded IBU World Championships were a highlight. It was a fine series of races for the twenty-six year old last week — it was a great moment for her to rise and shine.

Sandwiched inbetween was a stellar performance for the US women in the 4 x 6 k relay. For much of the race, the US team was well positioned for a medal. The combo of fast skiing and accurate shooting meshed. The team faded to place ninth overall – yet the positive energy from the collective effort did not immediately fade. The relay came the day prior to Reid’s mass start race.

“I was on such a raging high from the day before where our relay team was in the lead for most of the race and every single one of us competed in a podium position through at least one shooting,” Reid said during a call on March 18. “That carried on into my mass start. No matter what happened, I was going to have a personal best because I had never done one before and no matter what happened I was going to get a top-30.”

It was Reid’s first mass start at this level of IBU competition. She shot 1+1+1+1 during her four shooting bouts and skied fast enough to mark those faster skiers around her and not lose ground. Reid explained that during her third shooting bout, a big wind passed through which only impacted her first few shots, and she was able to capitalize.

“That is where I ended up passing a whole bunch of people,” reflected Reid. “I was just trying to focus on sticking with the person I was with, and not letting them go. Working on the little pieces of the course that my coach had told me to work on — the transitions, downhills, these V2 sections. So when I came into the range and shot I was really thinking more about that and I wasn’t really thinking what place I was in. I had no real idea what the heck was going on, and I certainly had no idea what the heck was going on after I left.”

As the race evolved, Reid heard her teammate Susan Dunklee, who had not qualified for the mass start, out on course providing critical race status data.

“The person for me that was the most coherent was Susan [Dunklee],” Reid recalled when asked how she received information that she was in the hunt for a top-10. “She was out on course on one of the uphills. And I understood her the most clearly. She pointed at a Swedish girl and said, ‘that is ninth place, go get her now.’ So I did.”

That was the rabbit to chase. It was a well-defined marker for pace setting and goal achieving. It helped cement her 10th place.

These World Championships brought celebration worthy results for Reid. Yet the disparity between expectations and results, when they do not align, can be debilitating. Reid asserts she weathers the ups and downs of biathlon by relying on her own internal mechanisms and teammates to process disappointment. The lows and highs become what they are: simply a result in a ski race.

“I actually don’t work with our sport psychologist really, although he is pretty awesome, but I have not worked with him extensively,” Reid said. “I think, for the most part, I tend to talk to my teammates and just see what they did because it is very unusual that every single one of us has an awful race on the same day. There are enough variables and enough people out there that that doesn’t usually happen. I can take from that that something good happened on that day and I don’t get too lost in my head about that sort of thing. I am pretty introverted so I don’t tend to interact with other people necessarily to make myself feel better. I kind of just internalize it for a while and forgive myself for sucking and them move on with it.”

The massive upside of moving on in a fickle sport provides the opportunity for another new chance. Reid noted how she perceives her ability to keep steady — to remain present in the game and the training and not allow a past performance to dictate the path forward.

In Östersund, Reid raced to 32nd in the 10 k pursuit after her 15th in the sprint. (Time back on the pursuit is determined by the sprint results.) She skied six penalty laps in the pursuit, going 3+2+1+0 for her shooting.

“One of the nice things about missing eight or nine shots, just having the worst shooting day out there, is understanding very clearly how it could have gone better and how to fix that for your next race,” Reid said of how she moves past an unsolid day on the range. “Whereas if you don’t miss any targets and you still aren’t performing well, that is actually more frustrating because you feel like you cannot push through that wall and you certainly cannot push through that wall by tomorrow. But in biathlon, if it is your shooting side that is failing, you can look at that and be like, ‘alright well, that was seven minutes of penalties today in the individual, but tomorrow is the sprint race and I can go out there and I can clean it. It can be totally freaking different.”

Reid has the engine. She has the temperament to make it “totally freaking different” during a different day on the range. That held true as she stormed towards Linn Persson, the Swede Dunklee matter of factly referred to when she told Reid ‘that is ninth place, go get her now.’”