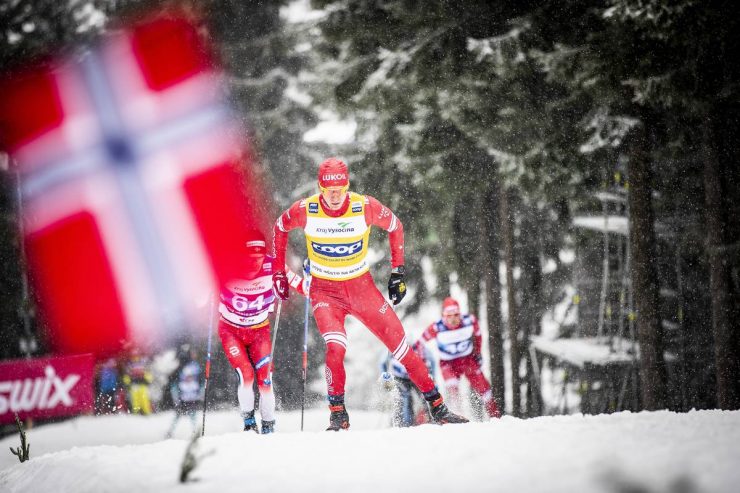 Despite a Norwegian flag in the foreground, no skier, or nation, could best Russia’s Alexander Bolshunov during Nové Město’s 15 k skate on Saturday. (Photo: NordicFocus)

The overall and distance specialist were back it Saturday in Nové Město, Czech Republic. After the grind of the Tour de Ski (TdS), which finished atop the Alpe Cermis on January 5th, all but the core roster of sprinters took last weekend’s stop in Dresden, Germany off.

Period III began for those chasing more than sprint points and podiums on a snowy day in Nové Město. Saturday’s race, a 15-kilometer freestyle individual start, set racers up for tomorrow’s 15k-classic pursuit. For those new to the sport, start positions for Sunday’s pursuit are based off time-back to Saturday’s winner.

The 1-2 punch of back to back distance races in Nové Město are compounded by a demanding 5 k loop with a course profile from .75 k to 2.3 k resembling a Patagonian skyline. The remainder of the course offered little for recovery or a deep-breath oxygen refill. 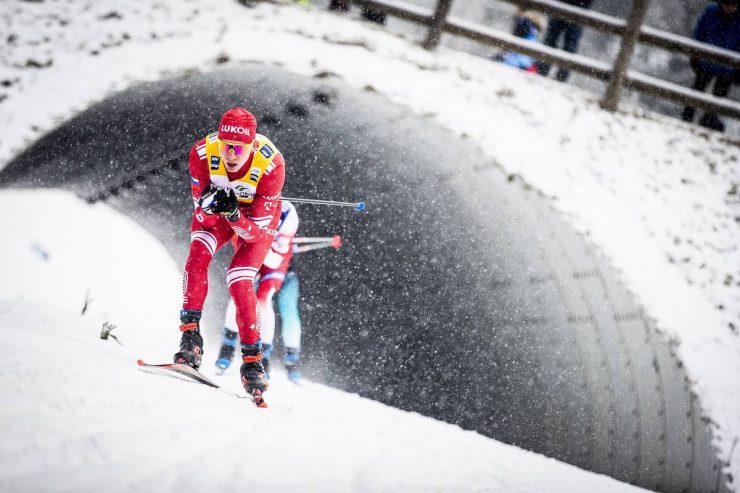 Russia’s Alexander Bolshunov provng dominate again in the distance events. Here, he is racing to a a 15 k skate win in Nové Město. (Photo: NordicFocus)

Russia’s Alexander Bolshunov, considering this was a men’s field with typically close time differences at the finish, was simply peerless on Saturday. He won the 15 k skate in 33:45 for his third individual distance race of the 2019-2020 season. Bolshunov won Lillehammer’s 30 k skiathlon with a power surge in the closing kilometer, and the 15 k classic pursuit in Toblach, Italy during the Tour de Ski. This was also the Russian’s seventh distance podium of the year.

The real gem for Bolshunov was his overall TdS win. Despite that massive seven-stage effort, his fitness hasn’t diminished. He came through first at every time check on Saturday proving, at least for now, he is recharged for the next swing of World Cup races. At the 5 k check, Bolshunov clocked an 8.5 second gap on Andrey Melnichenko of Russia, and a 10.8 second buffer on Finland’s Iivo Niskanen. 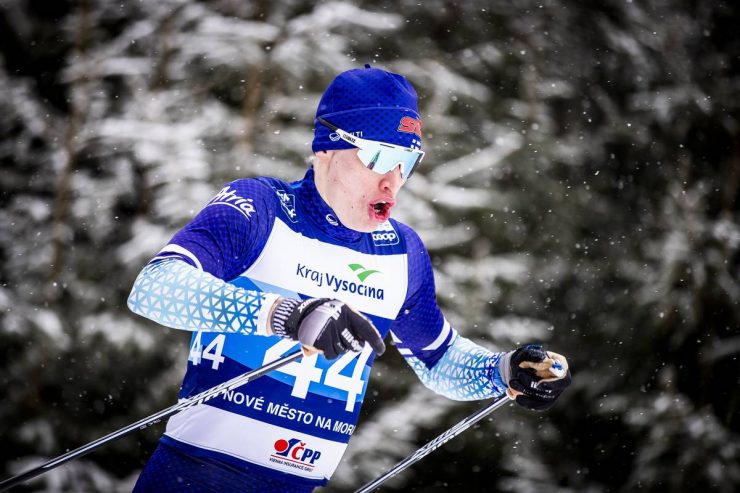 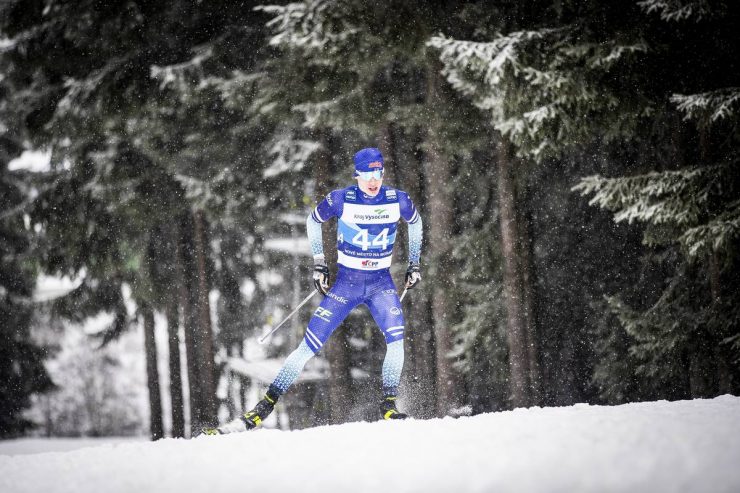 On form, Iivo Niskanen (FIN) has proved this season he can podium in skate events. He now sits in second place in the World Cup distance standings after his second place in Nové Město’s 15 k skate. (Photo: NordicFocus)

A trio of speedy Norwegian’s —  Johannes Høsflot Klæbo, Simen Hegstad Krüger, and Didrik Tønseth came through in 5th, 6th, and 7th respectively. However, Klæbo had already been gapped by 18.4 seconds, Krüger by 19.1, and Tønseth by 24.2.

A slam dunk? Not exactly, but the race for Bolshunov became more about holding on and maintaining than building a bigger lead.

After the 71 finishers had completed their three 5 k loops, Niskanen held on for second place, ceding a bit more time to Bolshunov in the final two laps, to cross the line 24.3 seconds back. We’ve sung the praises of Niskanen’s classic skiing before, primarily his affinity for the 15 k classic. But, on December 1st, in Ruka, Finland, Niskanen served notice that he had improved his skate skiing. Back then, he placed third in a 15 k skate pursuit while skiing the fourth fastest time of day. Consider today’s second place another data point marking Niskanen’s steep-curve rise as threat in the skate events too. 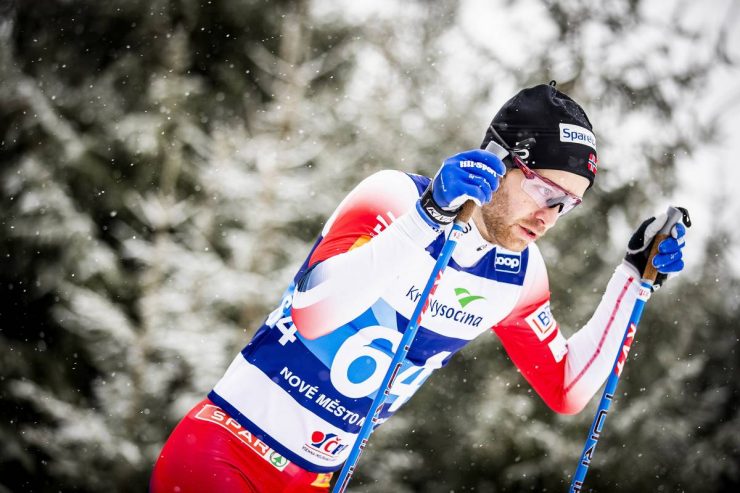 Sjur Røthe of Norway on his way to a steady-state third place in Nové Město’s 15 k skate. (Photo: NordicFocus)

Norway’s Sjur Røthe placed third (+40.0) overall. Røthe had posted the ninth fastest split at 5 k — 27.2 seconds back — but was able to pace accordingly, and leapfrog onto the podium. It was the Norwegian’s third distance podium of the season.

Two American men entered the race, David Norris (APU) and Ian Torchia (SMST2). For Norris, who competed in and finished the TdS, this was his best result of the season. He also scored World Cup points by finishing in 27th place (+2:18.9). 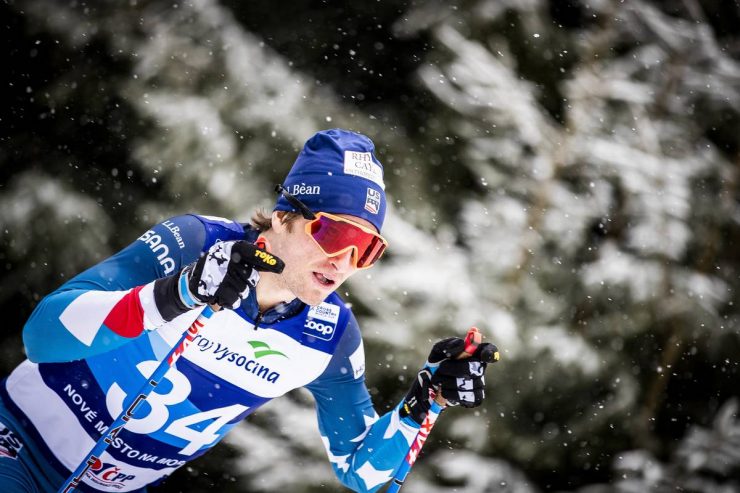 Several U.S. men who had been offered starts in Nové Město, according to U.S. Head Coach Chris Grover, had turned them down. In a post-race interview, Grover explained several of those skiers have race objectives later in the season that include possible participation in the Ski-Tour 2020 or results at Junior Worlds.

Norris spent time recovering from the TdS in Ramsau, where, he explained in an email, that he had to temper his training volume.

“After the Tour I felt pretty good,” wrote Norris. “Ramsau had great weather and the trails were in good condition. I had to hold back from skiing a bunch because it was so nice. I’m glad I did that because some of the Tour fatigue seemed to hit me a week or so later. I ramped training up a bit coming into this weekends races and it didn’t feel good. Often I have bad feelings after a rest week so I am glad I got a few harder sessions in before today.

“My goal today was to ski the entire course well, which meant I had to control myself from targeting any one section. This course is pretty gradual so it makes it such that there is nowhere to recover. With the deep sugary snow if you ski smooth you can float, but for me as soon as I began to struggle I found myself kind of getting stuck in the soft snow.”

Norris began in bib 34, a spot, if he felt tuned as he worked into the race, afforded him a slim chance to catch a ride with a later starting seeded skier.

“With my bib placement I had one chance to follow a seeded skier, but he passed me at a pace I couldn’t hold when starting my last lap. I skied alone most the race. I felt strong for the first 10km and I think on another day I may have had the energy to hold pace or even finish strong, but today I really faded in the last 5km. These conditions were really tough as soon as you began to suffer.” 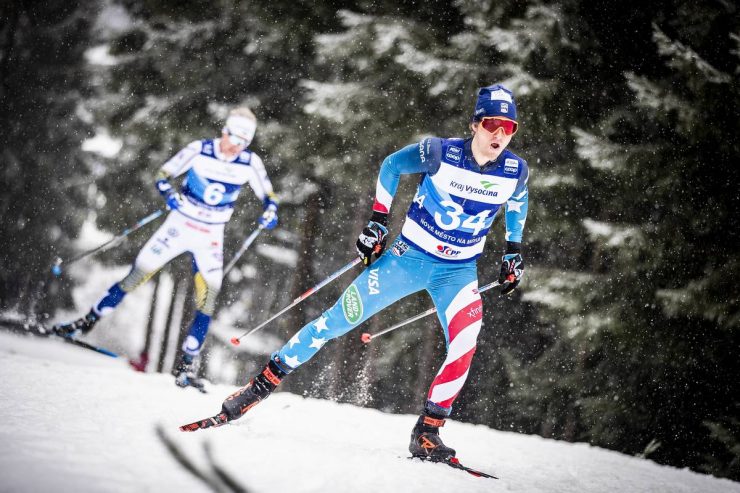 Torchia jetted from the U.S. to Europe after competing in the U.S. Senior Nationals. The twenty-three-year-old Torchia earned Period III World Cup starts as the overall SuperTour leader.

“Today was a tough and weird day. I could not hang on to anyone who came past either on the uphills or downhills,” emailed Torchia. “Definitely disappointed but I got to see my good college buddy who lives here in Czech after and that helped cheer me up. Can only go up from here so hoping for more tomorrow in the classic pursuit.” 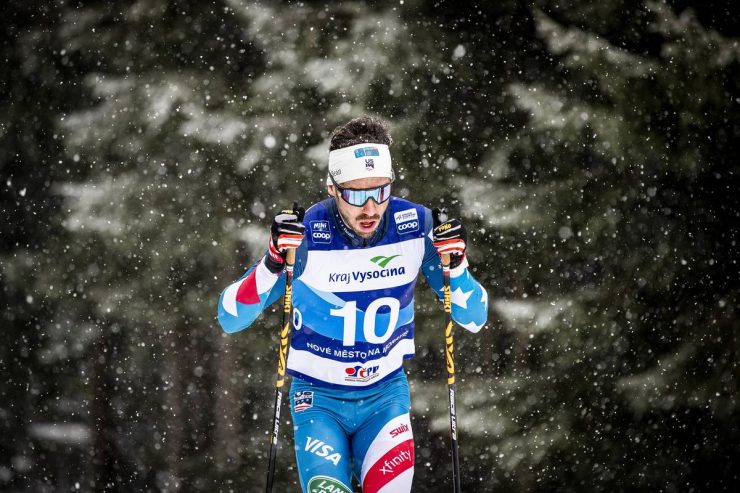 The men have raced 10 of 21 distance World Cup races, almost at the half-way tipping point. Bolshunov further solidified his lead in the distance overall with Saturday’s 100 point win. He leads with 554 points. Niskanen is second with 403 points. Bolshunov also leads the overall World Cup standings with 1181 points. Klæbo, who placed seventh on Saturday in Nové Město, is second overall with 1042 points. Klæbo, who excels in the sprints, must wait until January 26th, when Obertsdorf, Germany hosts the next World Cup sprint.

Racing continues tomorrow in Nové Město for the men with a 15 k classic pursuit. 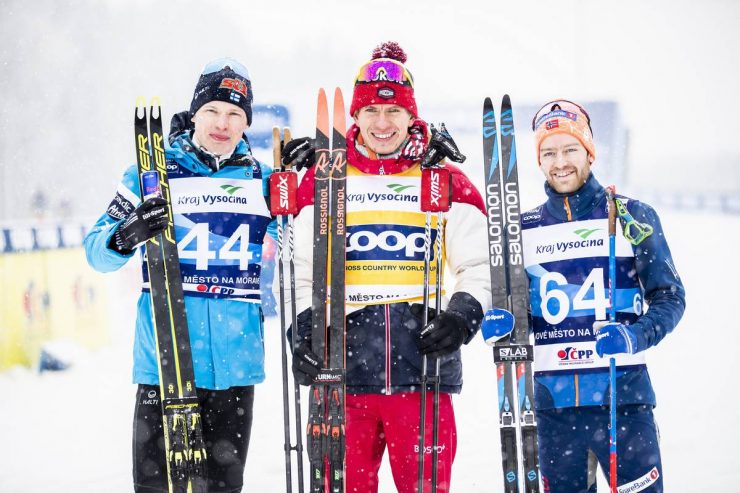