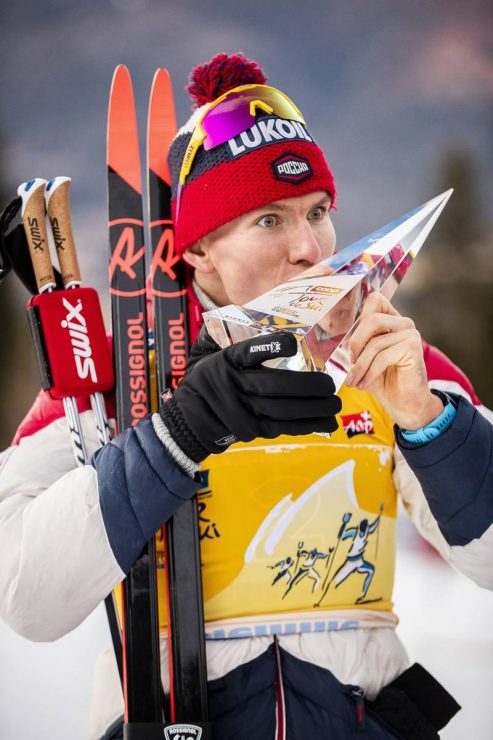 The hype. The Spectacle. Stage 7 of the 2019-2020 Tour de Ski (TdS) brings the show: the Alpe Cermis final climb. The race this year began as a mass start — a new format for the final stage, as this has historically has been a pursuit race, where the first skier to the finish line is the TdS champ.

With the opening sections of the course taking in the sprint course loop in Val di Fiemme, the man-made snow then led skiers on a snaking route, downstream along with the Torrent Avisio. At roughly 5.2 k into the what FIS had called a 10 k race, the gradient kicked up for the duration. The Alpe rears up at 12 percent initially, but soon morphs into a mountain-and-me struggle with gradients pushing 28 percent.

So the racers had that to mull as they no doubt had a somewhat anxious night of tossing and turning. And coupled with the big show final climb, FIS got its wish with a dearth of time bonuses on course this year for a tight TdS coming into the finale.

Last year’s TdS winner, Norway’s Johannes Høsflot Klæbo, wore the yellow leader’s bib by a single clock-tick, or one second over Russia’s Alexander Bolshunov. Last year’s TdS runner-up, Sergey Ustiugov of Russia, sat 15 seconds back. Ustiugov is seasoned on the Alpe. He won the TdS overall in 2016-2017, and was third in 2015-2016.

Coming into that final stage in 2019, Klæbo had a 1:20.4 minute gap on second place Ustiugov. And with the pursuit format, Klæbo was never caught, despite ceding just over a minute to Ustiugov in the final stage. Bolshunov bested Klæbo by 17.2 seconds. On paper at least, Klæbo would have to maintain close contact today.

With the knowledge of last year’s climbing splits, Klæbo’s task this Sunday involved matching the Russians stride for stride. There would be no time to let up momentarily, reset on the Alpe, and grind to the finish. It was to be head to head racing.

Part of the job here is building tension. Cutting to the chase, there was no Klæbo-induced tension Sunday on the Alpe. He hung in there for a bit. At 6.6 k, before the toll of cumulative climbing took effect, Klæbo was fifth, two seconds behind the lead pacesetter Ustiugov. Bolshunov shadowed his teammate one second back.

As the Alpe kicked up, Klæbo, who at moments looked atypically spent, began to fall off in earnest. At 8 K he slid to 6.4 seconds back to Ustiugov, but more importantly, 5.1 seconds behind Bolshunov. Bolshunov, at that point was the virtual TdS overall leader. His task simple: keep pace with Ustiugov who had to gap his teammate by a bit more than 14 seconds to seize the overall.

Klæbo never regained traction on the Alpe. He placed 21st on the day. He lost 1:10 to Bolshhunov on the stage, and 58 seconds to Ustiugov. That put Klæbo in third overall for the Tour. 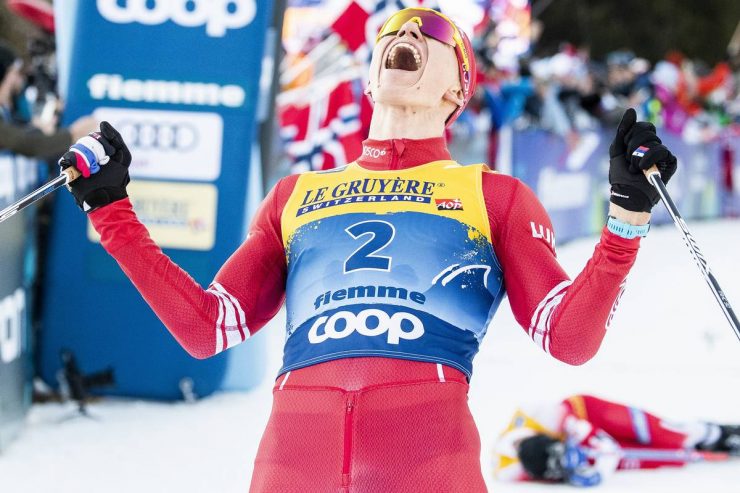 Ustiugov intially held on. With less than a kilometer to go, he and Bolshunov were velcroed. The younger Bolshunov did eventually surge and any semblance of a link between he and Ustiugov snapped. Bolshunov went ahead to place third on the stage and take the Tour overall win. By the finish, Ustiugov, who ended up fifth for the stage, had ceded another 12.3 seconds to Bolshunov. 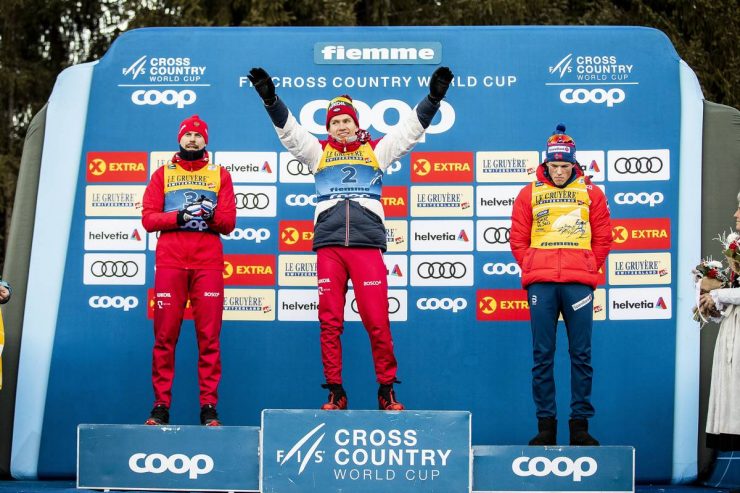 Røthe and Krüger animated the racing for the stage win. Past the 8 k time check, the two Norwegians accelerated. No skiers near the front dared match. Last year, Røthe posted the fastest time of day on the Alpe, Krüger was a close second. (Krüger was third overall in last year’s TdS.) 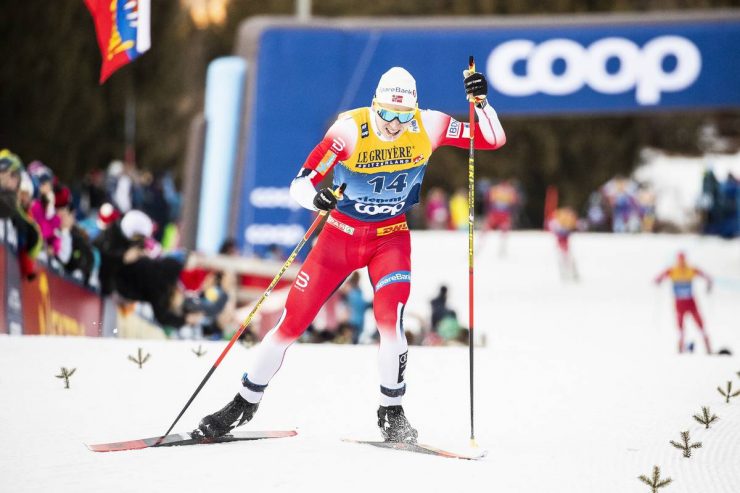 Today, Krüger motored ahead of Røthe in the waning meters for the stage win in 30:55.8. Røthe stopped the clock 13.9 seconds later to secure a Stage 7 second place. With his climbing prowess on the Alpe, Krüger jumped from 12th overall after Stage 6, to fifth. Røthe moved from sixth to fourth.

“It hasn’t quite worked out in the Tour so far so I hoped to get a good finish,” Krüger told FIS after the race. “I knew that this hill suits me well and so I just tried to keep that steady pace and to keep it going all the way to the top and it was fun to cross the finish line as the first thanks to the mass start.

“Sjur and I were going together and he looked strong so I was far from sure that I was going to win but it was also tough going first so I really had to push.” 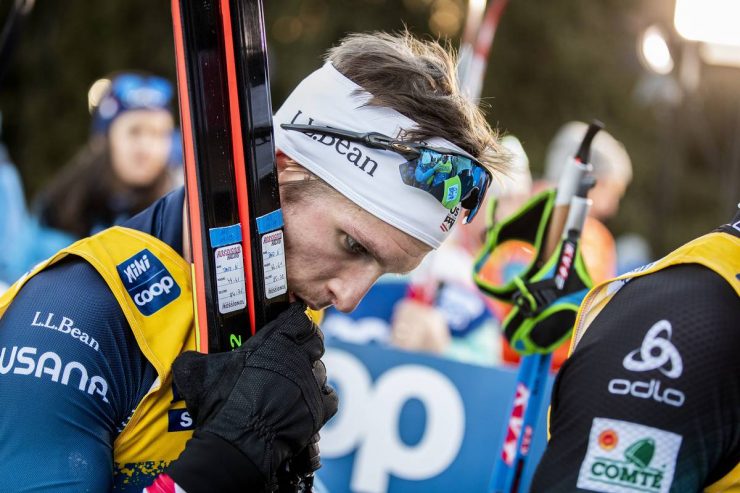 David Norris of the U.S. This image captures the true sense of the TdS. A pure physical and mental test for skiers. (Photo: NordicFocus) 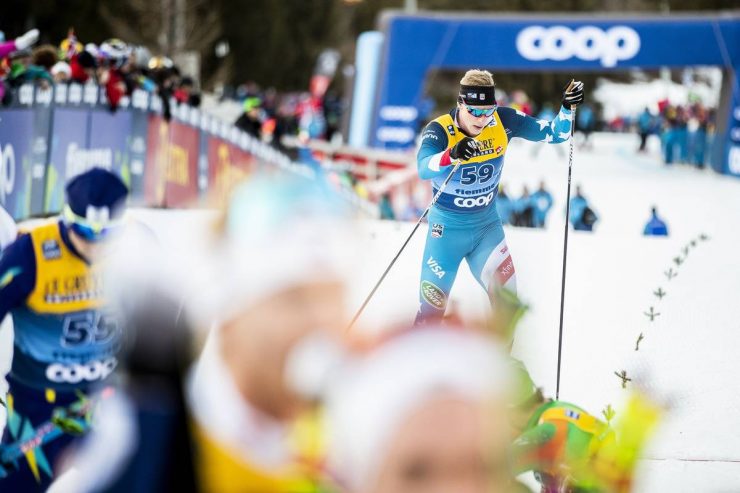 So it’s a wrap. The TdS concludes with Klæbo unable to solve this seven-stage racing puzzle made more difficult by the two Russians who stymied his run for a second overall TdS win.

Racing continues next weekend on the World Cup with city sprints from Dresden, Germany. 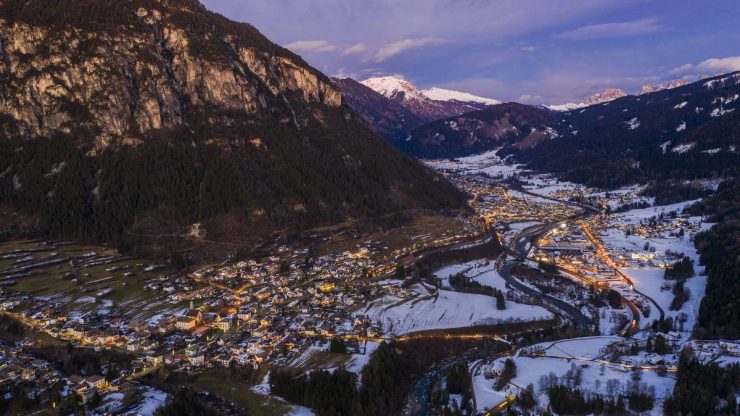