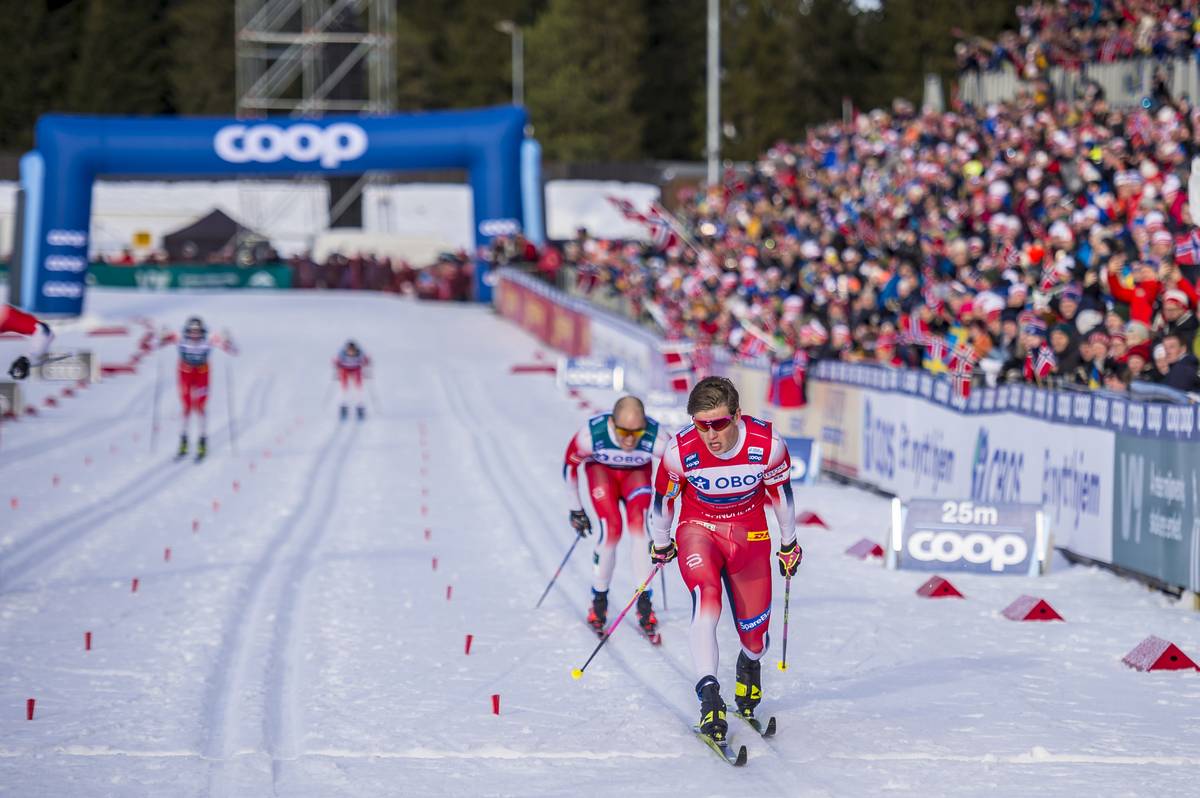 Norway’s Johannes Høsflot Klæbo crossing the line first for the last time of the day on Saturday to win the men’s 1.5 k classic sprint final, Stage 5 of the Ski Tour 2020, ahead of his teammate Pål Golberg, in his hometown of Trondheim, Norway. (Photo: NordicFocus)

Takeaways from Stage 5 (of 6) of the Ski Tour 2020? Alexander Bolshunov no longer has his minute-plus cushion to Pål Golberg in the overall, and Johannes Høsflot Klæbo is rounding into G.O.A.T. (Greatest-Of-All-Time) form.

The 23-year-old Bolshunov, a Russian powerhouse who won the Tour de Ski last month, ranks first in the overall World Cup standings, and has landed on the podium in four out of five races so far this month (before Saturday’s classic sprint), crashed and burned in Saturday’s semifinal. He took himself out while switching tracks with 100 meters to go, clipping his left leg with his right ski and falling out of contention (from fourth to sixth) in the finishing straight. That was the end of his day, and his 1:05-minute lead in the Tour standings was reduced to 34 seconds on Golberg, who kept himself in prime position by finishing second to Klæbo in the final. 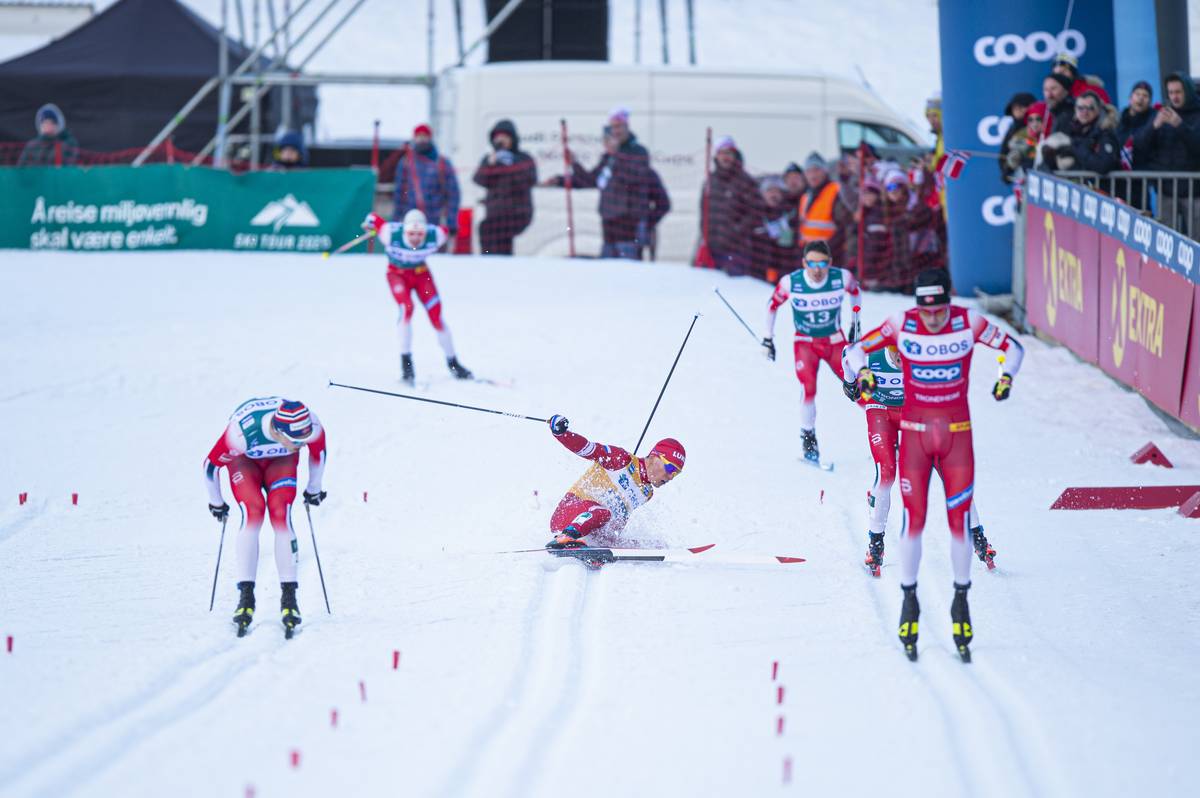 Russia’s Alexander Bolshunov (center) takes an untimely tumble with 100 meters to go in the first men’s semifinal of the 1.5 k classic sprint at the Ski Tour 2020 on Saturday in Trondheim, Norway. Up front, Norway’s Johannes Høsflot Klæbo (r) skis to first in the heat. (Photo: NordicFocus)

Then there was Klæbo, also 23, second in the overall World Cup standings and a Norwegian celebrity in his hometown of Trondheim, who did what he does best — dominate a sprint race — in front of a slew of familiar faces. He had never won a race at home in Trondheim before, and he did so Saturday in the men’s 1.5-kilometer classic sprint for his 14th straight World Cup individual win and 49th World Cup podium.

He started the day by winning the qualifier by more than 2 seconds (over fellow Norwegian Erik Valnes +2.42 in second), and later advanced comfortably out of the quarterfinals and semifinals to the final. In the first quarterfinal, Klæbo cruised to second place behind Golberg, after Golberg set the pace up front for the bulk of the nearly 3-minute race, before decisively winning his semifinal (after passing Golberg on the last climb) by 1.2 seconds.

That semifinal saw five Norwegians — Klæbo, Golberg, Valnes, Finn Hågen Krogh, and Simen Hegstad Krüger — pinned against Bolshunov. They finished in that order after Bolshunov, who had qualified fourth and advanced in second behind Valnes in their quarterfinal, went down in front of the stands while Krogh and Krüger passed him by. Klæbo, who had the luxury and time to ease way off before the finish line, moved on to the final along with Golberg, Valnes, and Krogh. Bolshunov, who crossed the line nearly 17 seconds after Klæbo, did not, and he ended his day in 12th. 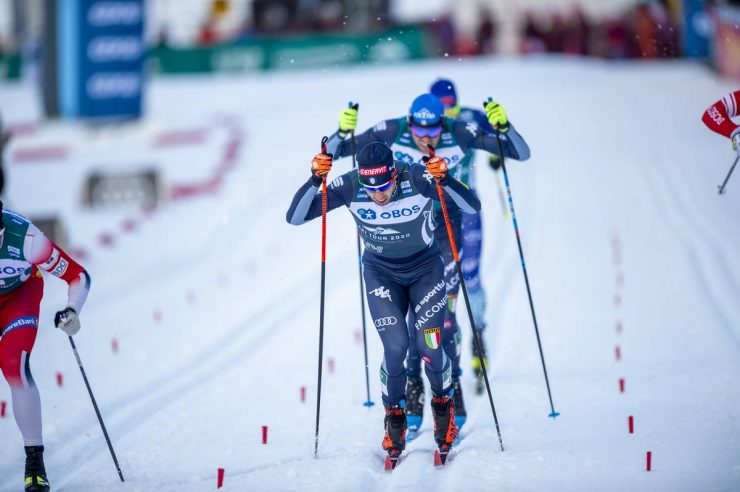 The second semifinal was more diverse with two Italians — Federico Pellegrino and Francesco de Fabiani — going head to head with Norway’s Emil Iversen, Russia’s Gleb Retivykh, Finland’s Lauri Vuorinen, and Sweden’s Johan Haeggström. Wet snow that had begun in the later men’s quarterfinals had mostly stopped falling, and the sun began to poke through on the +3 Celsius afternoon.

On an early climb, Haeggström fell to his knees and broke his pole while skiing at the back of the pack. He quickly received a replacement, but wasn’t able to regain contact with the group while Pellegrino took charge up front. Despite leading into the stadium, Pellegrino lost some steam in the finishing stretch while Iversen came from behind to cross the line first, 0.3 seconds ahead of Pellegrino and 0.6 seconds ahead of Retivykh. Iversen and Pellegrino advanced to a nearly all-Norwegian final, with five men in red against the Italian in dark blue.

From there, it was another Klæbo jam sesh as the local hero set the tone in the final. Valnes initially led up the first climb while Klæbo, Golberg and Iversen followed closely. By the next uphill, Klæbo used his ferocious double pole to outmatch his teammates, who were still striding. Meanwhile, Pellegrino fell off the pace and into sixth. Klæbo kept the lead for the rest of the race, getting a gap on Valnes and Golberg on the descent into the stadium before running away with the win in 2:52:07. Golberg placed second, 1.2 seconds back, Valnes third (+1.6), Iversen fourth (+5.79), while Krogh, who also faded when Klæbo kicked into high gear, pulled some theatrics at the line and stalled before crossing 18.91 seconds back. Pellegrino finished last for sixth on the day, 22.78 behind Klæbo. That secured Klæbo’s spot as the men’s sprint champion for the Ski Tour 2020, while Pellegrino placed second, 13 points back, and Golberg was third, another 26 points back.

“It was an amazing day for us Norwegians,” Klæbo told FIS. “We had really good skis today, and I think we have done something right. It was a really fun race, and I think it’s an amazing to see how many people that actually come here and cheer for us. It’s something we really appreciate.” 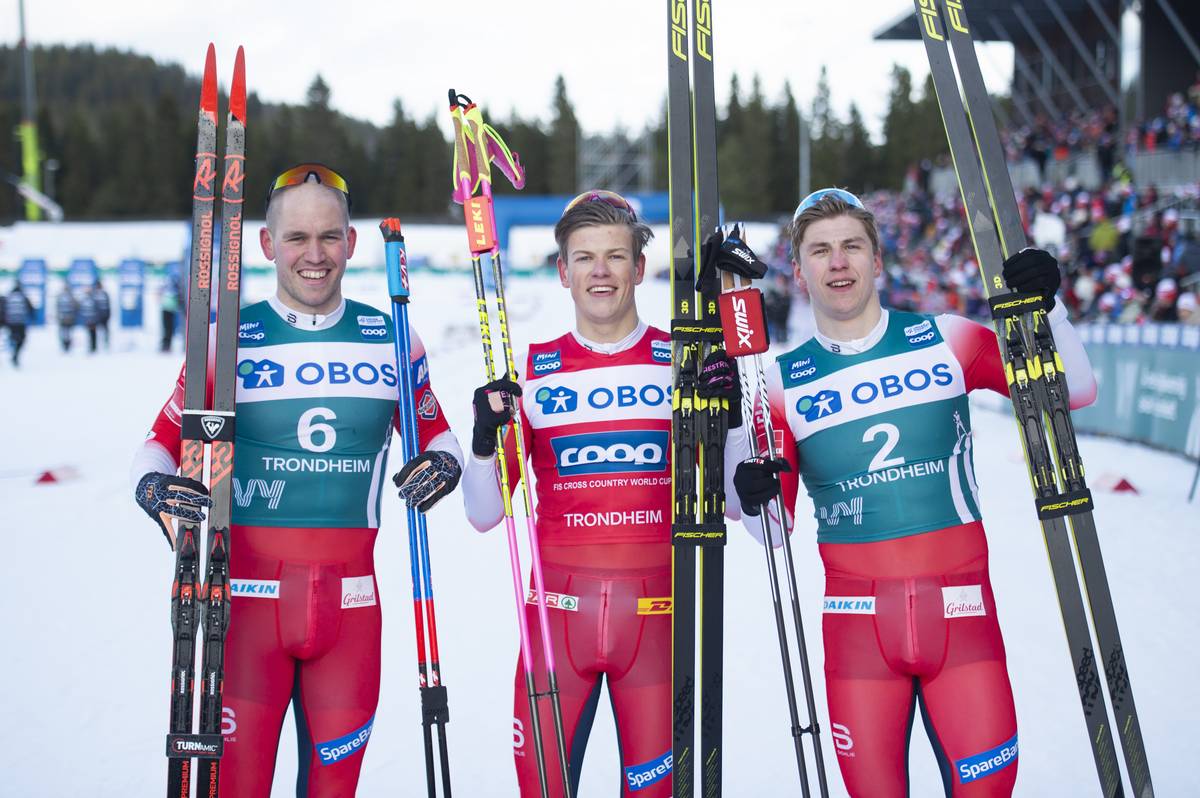 In the overall Tour standings, Klæbo is up to sixth (+2:00.0) with one race — a 30 k classic pursuit — remaining on Sunday. Golberg will start 34 seconds behind Bolshunov, while Krogh in third overall will start just over a minute later (+1:35), ahead of Sjur Røthe (+1:40) and Martin Løwstrøm Nyenget (+1:46), also from Norway. In fact, eight of the top 10 men in the overall Tour standings are Norwegian. The other two are Russian: Bolshunov and Andrey Melnichenko (9th place). 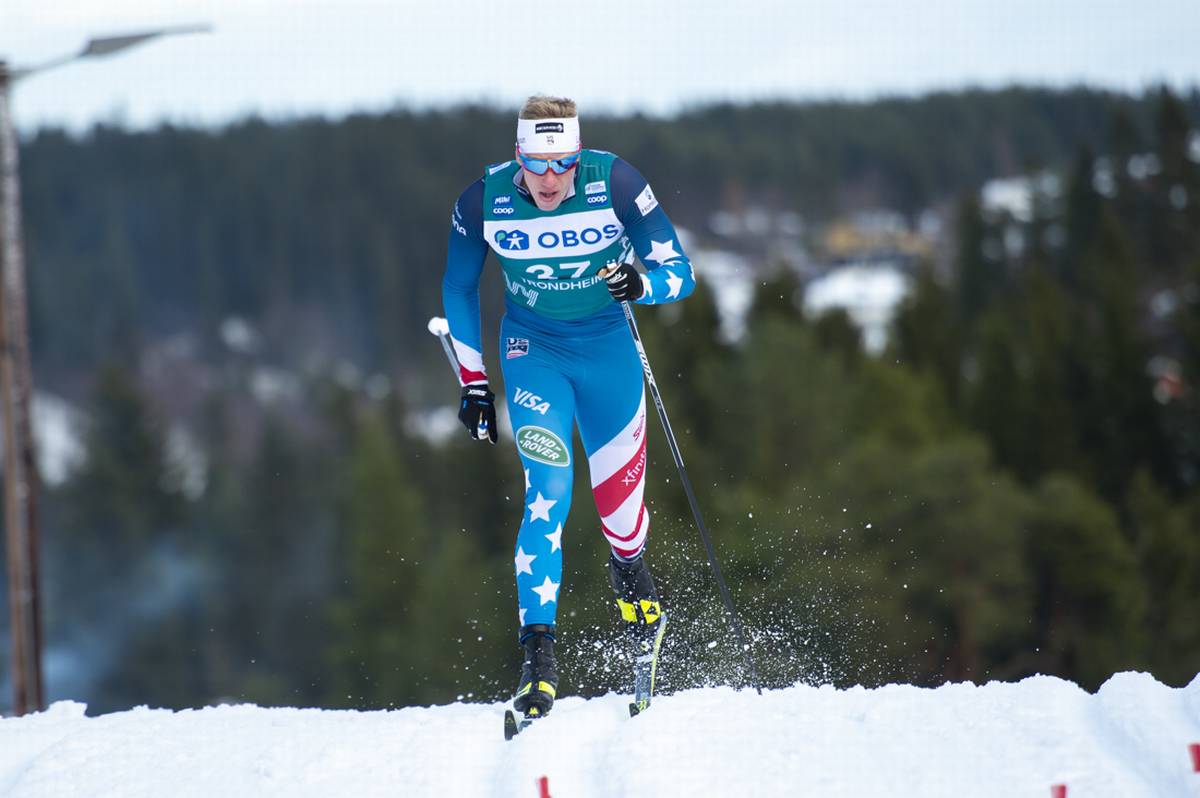 According to U.S. Ski Team coach Matt Whitcomb, Hamilton and Bolger have mild head colds, and Bolger and Hanneman, who rank 64th and 71st, respectively, out of 73 still in the Tour, will not start Sunday’s final stage.