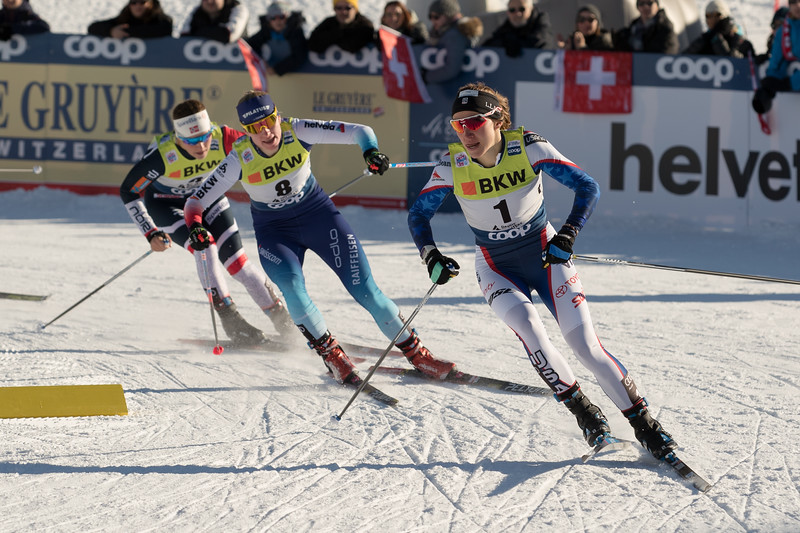 DNS. It’s a rare acronym to crop up in the results portion of Sophie Caldwell’s FIS database. But after battling a cold for the first few weeks of the 2018/2019 season, Caldwell did not start (DNS) the Lillehammer freestyle sprint and also chose to sit out the women’s relay last weekend.

By this Saturday in Davos, Switzerland, the 28 year old’s decision to rest and not race seemed to have paid off. She sprinted to a second place in the women’s 1.5-kilometer Davos freestyle competition, finishing just behind Sweden’s sprint superstar, Stina Nilsson. Earlier in the day, Caldwell also won the women’s qualifier in a time of 2:46.2.

“I think when you lay down a really fast qualifier, it gives you confidence moving forward,” U.S. World Cup head coach, Matt Whitcomb said during a phone conversation after the race.

“I was coming off a long bout of illness, so I was honestly just really happy to be racing again and didn’t have any expectations going into the day,” Caldwell wrote in an email to FasterSkier.”I think when you’ve had a period of illness or feeling down, it’s important to set smaller goals to gain your confidence back, so I was really grateful to be feeling healthy again and told myself I would be happy to qualify today. I was very pleasantly surprised when I won the qualifier and continued to feel great throughout the day, so the day exceeded any expectations I had going into it.” 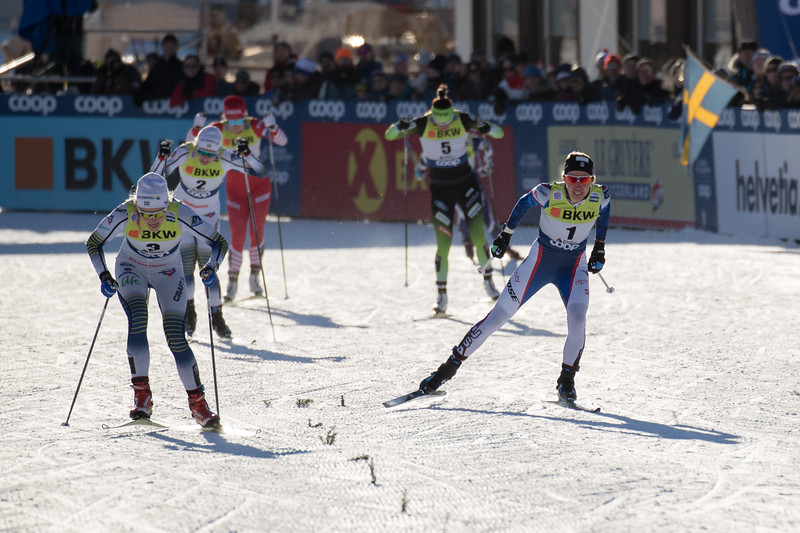 After qualifying in first, Caldwell advanced to the first quarterfinal which she won in a time of 2:41.97. Moving on to the semifinal, Caldwell once again crossed first in a time of 2:42.28. For both her quarterfinal and semi, Caldwell remained positioned in third to fourth through the first climb and descent and second major climb of her heats, before making her move in the final descent.

“She decided in both her quarters and semis and final to lay back a little bit mid-pack try and follow a little bit and then pounce as the pack tired out intending to have bit more energy herself and that went to plan perfectly,” Whitcomb said. “Really proud of her tactics today.”

“I really like how technical and fast this course is, so after I had a good qualifier, I knew I could be really confident in my ski speed and finishing stretch, so I just tried to ski smart the rest of the time, conserving energy when I could and moving into a good position up the hill the second time,” Caldwell said.

In the final, it was Nilsson along with Slovenia’s Katja Visnar setting the pace from the gun. Caldwell, who had started in lane two, slotted herself to the inside of the final group in third through the first climb.

As the field approached the crest of the course’s first major uphill, Finland’s Krista Pärmäkoski made a decisive move to the front. She maneuvered to the left of the group, jetting from fourth to first. Caldwell continued to click away, cornering to the inside to maintain a draft off Visnar and Pärmäkoski. Just to Caldwell’s left, was Nilsson.

As the group swept into the course’s first descent, the skis of the U.S. and Sweden seemed to outpace the rest. Heading into the following course’s flatter V2 section, Nilsson had snuck around Visnar and Pärmäkoski to take the lead. Caldwell shadowed her move and the two began to push the pace. It was Sweden’s top sprinter being chased down by Caldwell; the remainder of the sprint final’s field chasing down the U.S.

Neither Caldwell or Nilsson let up. The two pulled away in the final climb, with Nilsson holding a slight gap over Caldwell. As the racers began the final descent on course, almost two meters separated Caldwell from the next closest skier, Sweden’s Maja Dahlqvist.

Rounding into the final 100-meters, Nilsson maintained her lead on Caldwell and crossed ahead of the American for first in a time of 2:41.34. Caldwell finished 0.72 seconds behind for second place.

“I was feeling pretty good on the climb, but I knew I had fast skis and felt really good in the finishing stretch, so my goal was to position myself in 2nd or 3rd at the top of the last hill to take advantage of the draft, corner, and finish stretch,” Caldwell wrote in an email. “Unfortunately, Stina got away from me a bit on the climb, but I tried to push as hard as possible to close the gap and am of course thrilled with 2nd!”

The win is the first of the season for Nilsson. She won the Davos freestyle sprint in December last year, besting American Kikkan Randall (now retired) and Norwegian Maiken Caspersen Falla. Falla placed fourth in her quarterfinal and did not advance to the semis. Nilsson now has 13 individual World Cup sprint victories and is currently ranked first in the sprint standings with 186 points, ahead of Dahlqvist in second with 140 points and Russia’s Yulia Belorukova in third with 119 points. 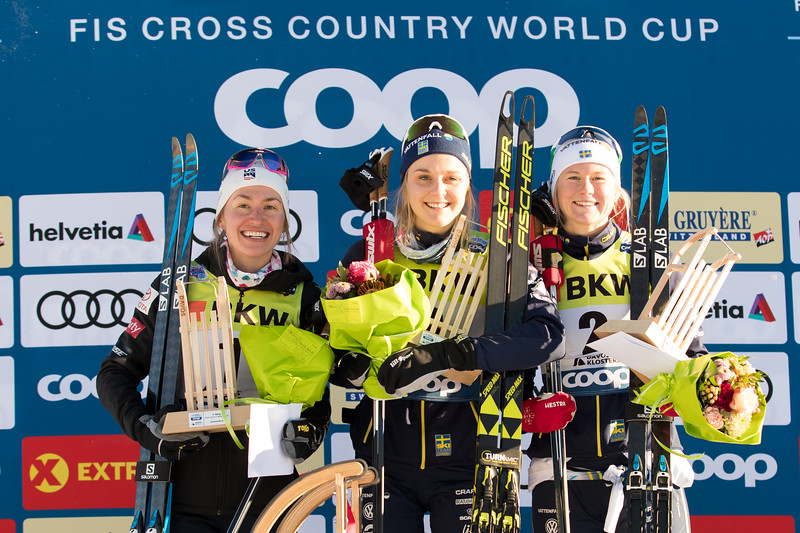 Claiming Saturday’s third and final podium position was Dahlqvist, who crossed 2.60 seconds behind Nilsson. The podium is Dahlqvist’s second World Cup podium this season. She placed second in the FIS classic sprint opener in Kuusamo, Finland. Prior to this year, Dahlqvist has had one other individual World Cup top three performance, that being her second place finish in last season’s Dresden freestyle sprint.

Rounding out the top-ten was Swiss skier Nadine Fähndrich in seventh, Evelina Settlin in eighth, Lotta Udnes Weng in ninth and Ingvild Flugstad Østberg in tenth. 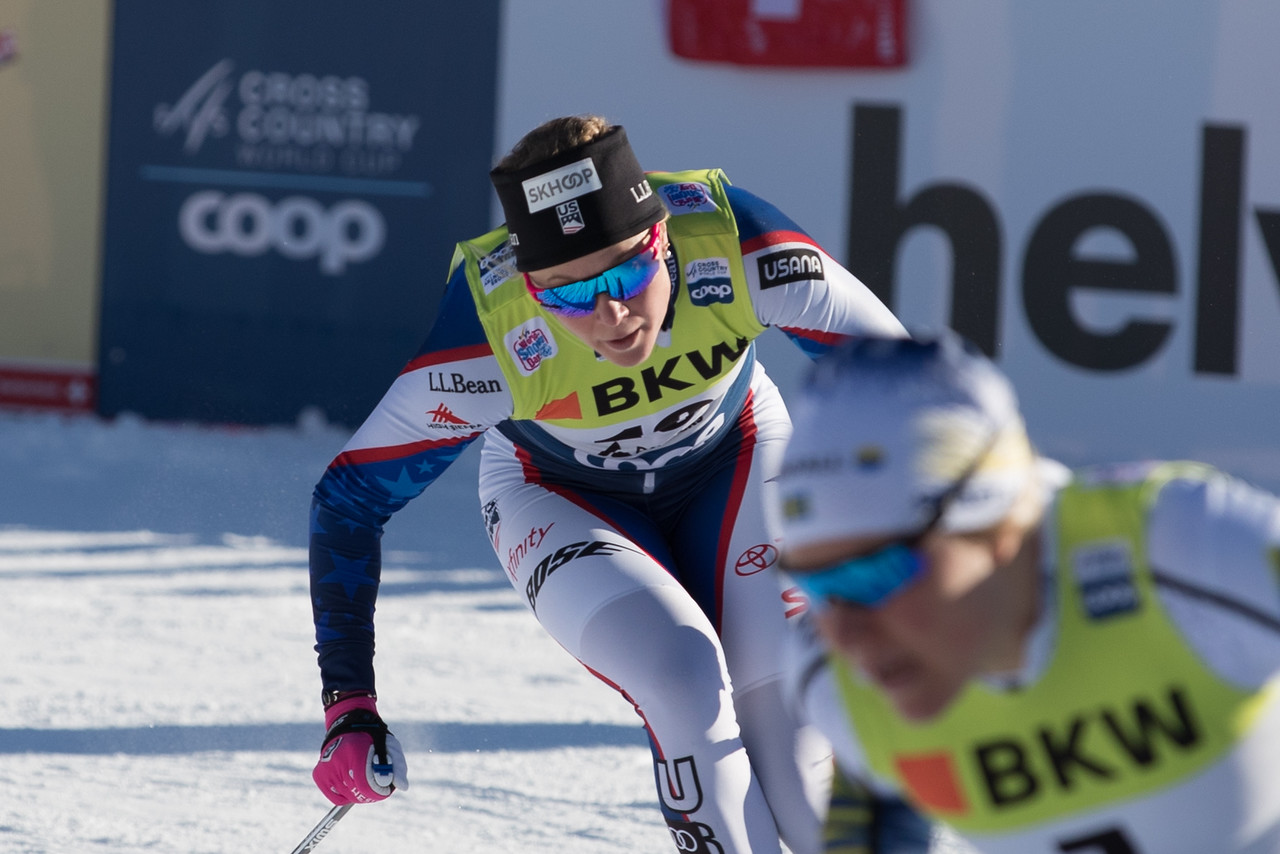 Bjornsen held onto second through the descent before getting passed by Nepryaeva in the finishing stretch. She finished the quarterfinal in third behind Falk and Nepryaeva.  Bjornsen missed advancing by 0.13 seconds. Brennan crossed in sixth.

In the first quarterfinal along with Nilsson, Sargent led the group through the first uphill. However, by the second climb on course, Sargent had dropped back to sixth and eventually crossed her quarterfinal in fifth. 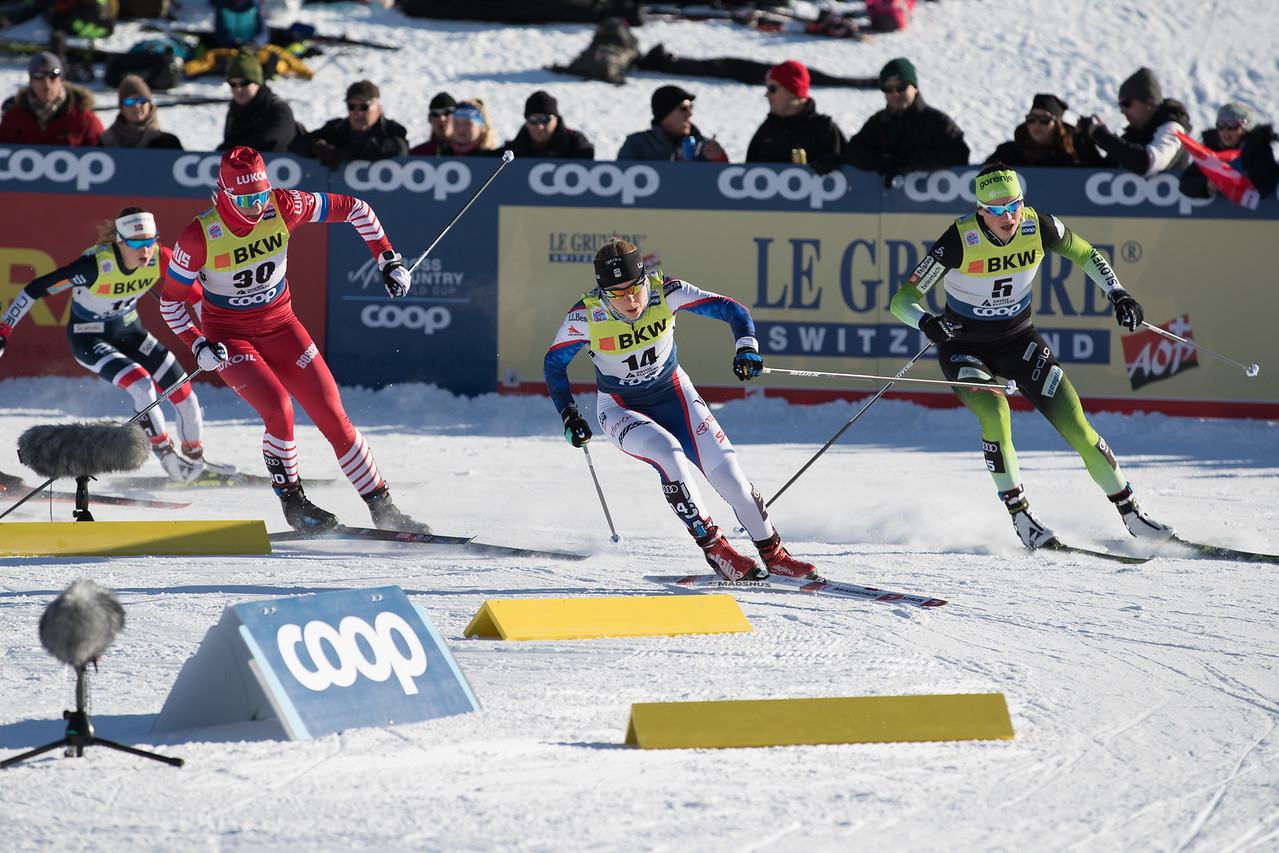 In the fourth quarterfinal, an early fall put Diggins out of contention for advancement to the semis. In the first straightaway, the American’s left ski collided with the pole of Russian ski racer, Natalia Matveeva, causing Diggins to crash.

“Traffic just sort of closed in on her,” Whitcomb said. “Just a race incident, the kind of the thing you saw happen in some of the other heats.”

In the second semifinal, a collision between Pärmäkoski and Norway’s Tiril Udnes Weng caused the Norwegian’s left ski to fall off midway through the race.

“Unfortunately in Davos, even Jessie can’t recover the 30-meters required to catch back up to the group,” Whitcomb added. “It’s too delicate a venue at altitude.” 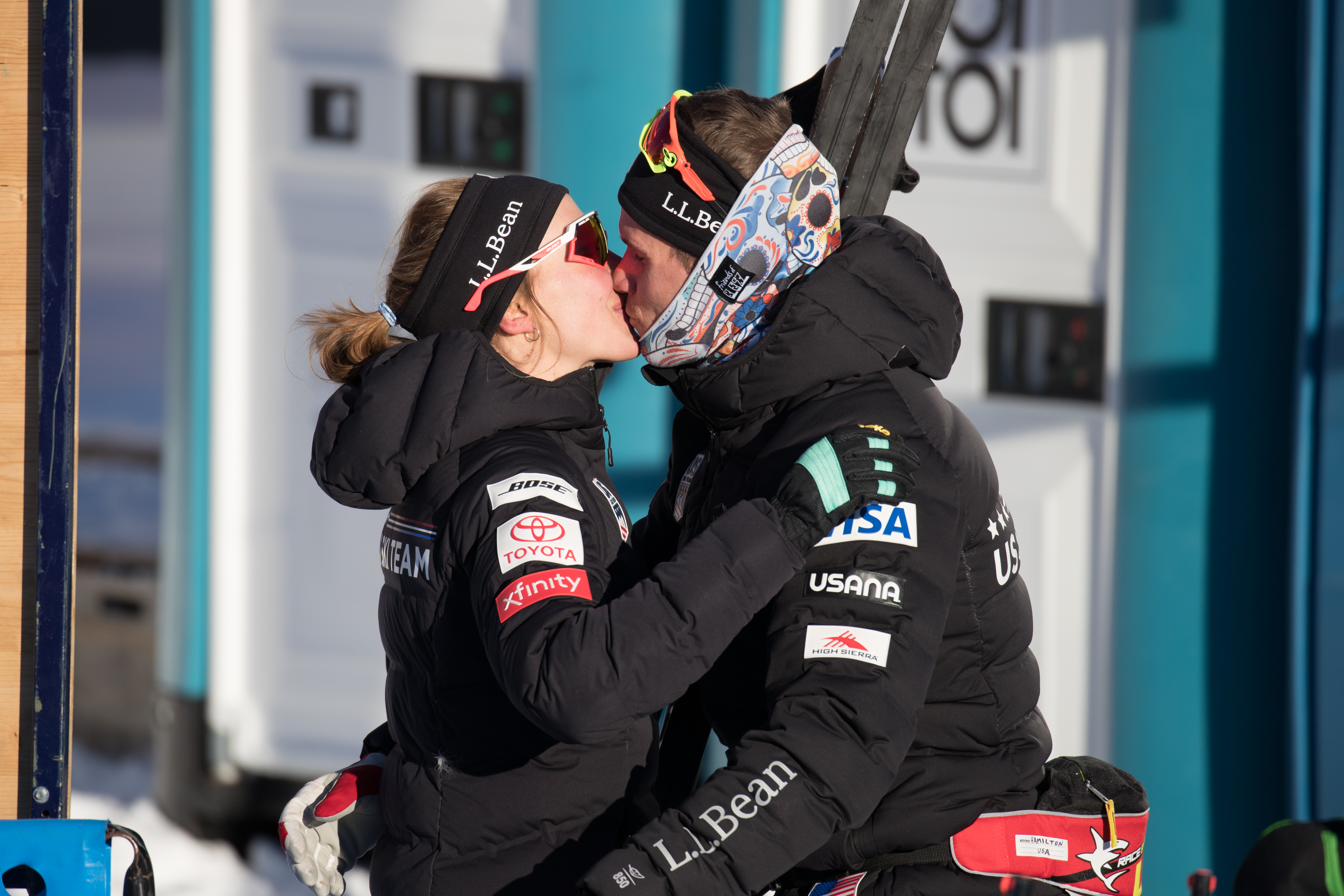