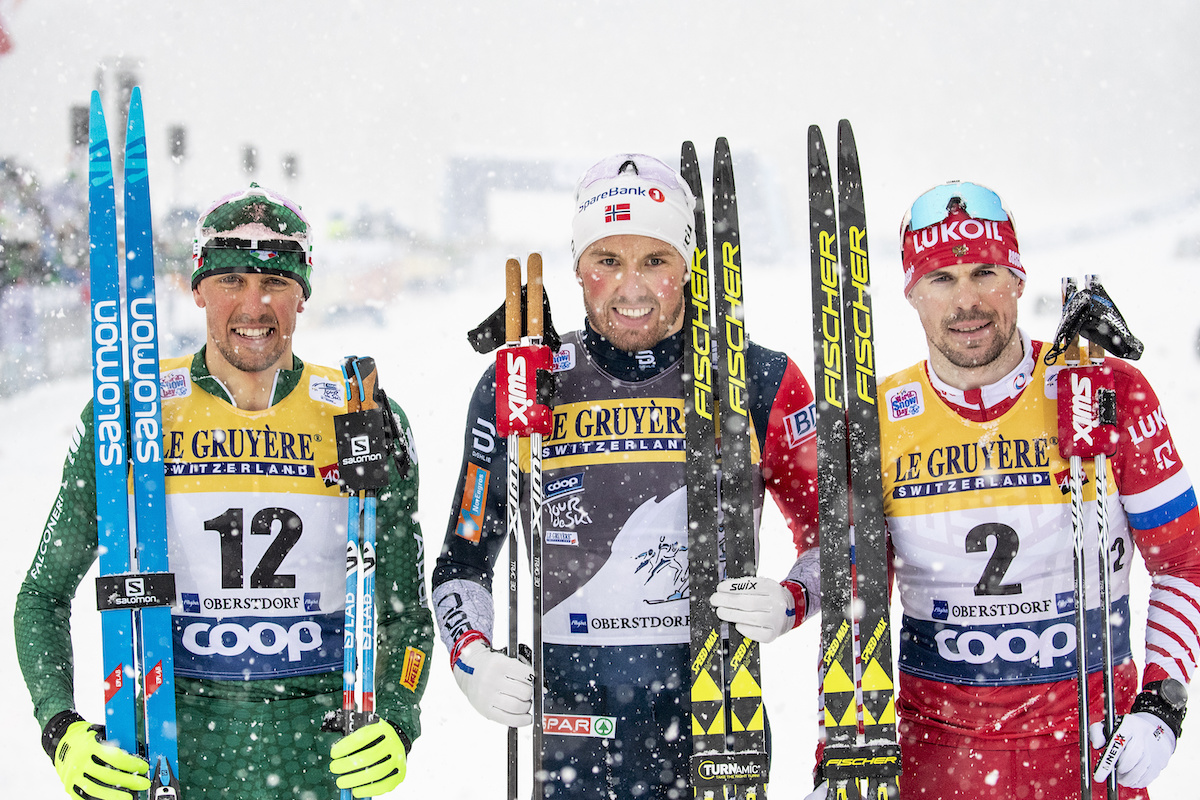 Temperatures near freezing, high humidity, and snow falling heavily in large flakes – a trifecta that can be difficult for kick waxing – greeted racers in Oberstdorf, Germany during Stage 4 of the Tour de Ski. The 15-kilometer classic race marked the first mass start of the World Cup season giving the racers the opportunity to face off head to head. It was close quarters on the 2.5 k loop. With a string of Norwegians, including Johannes Høsflot Klæbo, the Tour leader after the first three stages, leading the pack, the men stayed tight – less than two seconds separated the top-10 at the 10 k mark. Less than four seconds separated the top-20.

The start of the men’s Stage 4 of the Tour de Ski, a 15 k classic mass start. (Photo: Fischer/Nordic Focus)

As the final 5 k began, skiers began to vie for the lead, spreading the pack out slightly from the front. With less than 1 k to go, no decisive moves had separated a clear winner from the pack.

Cresting the top of a long climb, a small group emerged led by Sergey Ustiugov of Russia, who began the day ranked second overall in the Tour. A win would have earned him enough bonus seconds to move into first place. However, Francesco de Fabiani of Italy, Emil Iversen, and Sjur Røthe, both of Norway, clung to the Russian.

As the skiers entered the final stretch, furiously double poling toward the line, Iversen emerged at the front. Stopping for a quick bow before his final pull, Iversen crossed the finish line just ahead of de Fabiani (+0.9), followed by Ustiugov (+2.0) who just bested Røthe (+2.1) at the line. Klæbo finished 9th (+5.6) maintaining his position as the overall Tour leader.

“It was as usual here in Oberstdorf, it was chaos from the start to the finish line – but I like that,” Iversen told the International Ski Federation (FIS). (Last season, Oberstdorf’s TdS sprint races were canceled due to severe weather.)

For Ustugov, his podium finish kept him in second overall, 15.1 seconds out of the lead. Iversen’s win today moved him into third place in the T9our standings — he now trails Klæbo by 31 seconds. Alexander Bolshunov of Russia holds the fourth position (+46.6), followed by Norway’s Sindre Bjørnestad Skar in fifth (+1:20.7).

Canada’s Alex Harvey remained near the front of the race, crossing the line amidst a chase pack of five skiers. In a photo finish, Harvey finished 14th (+9.1) and was taken at the line by Norway’s Simen Hegstad Krüger who placed 13th. Also for Canada, Bob Thompson finished in 64th (+1:42.5), and Lenny Valjas 67th (+2:26.1).

While normally thought of as a distance skier, Harvey has not had the results he had hoped for in World Cup distance races this season.

“I’m still hungry for better results, but the biggest positive for me was how I felt during the race,” said Harvey in a call. “It was the first distance race of the season where I was feeling strong and recovering well on the downhills, so I was able to have some fun skiing. All the other distance races this year I couldn’t find a good vibe, but today was good, so that’s the biggest positive.” 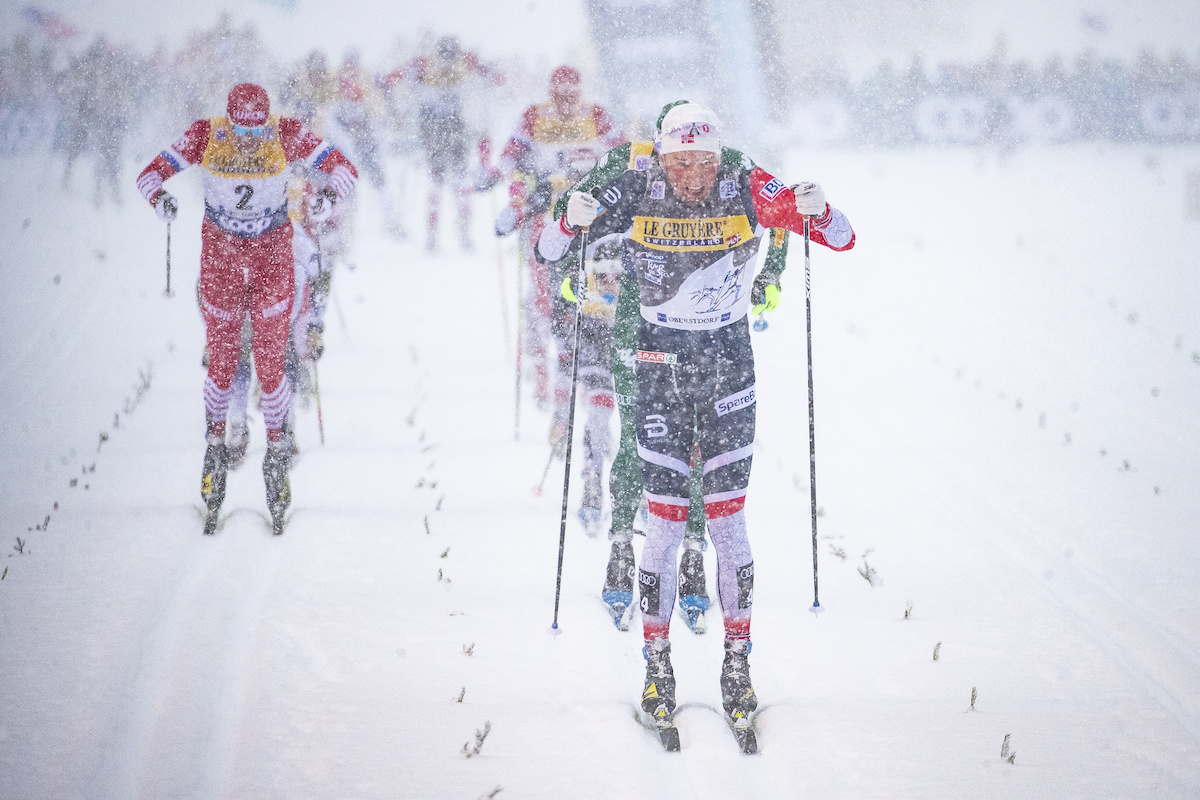 Norway’s Emil Iversen amidst the snow dump as he poles into the finish to win Stage 4 of the Tour de Ski. (Photo: Fischer/Nordic Focus)

According to Harvey, the heavy falling snow throughout the race played a role in keeping the race tight. In the end, first through 49th place were separated by only 14.9 seconds.

“It snowed a lot, it snowed more and more as the race went on,” said Harvey. “The falling snow rate was getting higher and higher. Nobody could get away. The guy at the front would plow the way for everybody else, and we’d kind of ski in one line… Every lap was getting worse and worse. It was really fighting for position. Going hard on the climb was the best way to pass – normally it’s on the flats and the downhills where you can kind of find your way through, but it was single file on the flats and downhills, then there were more tracks that were skied in on the climb.

“You had to fight for every inch, but I think I was okay until maybe the fifth lap where I drifted a bit too far behind. I tried to reposition myself at the beginning of the last lap, but in doing so I was skiing outside the race line, so plowing through a lot of snow there. I was able to get back close to the front but spent a lot of energy doing that and I just didn’t have much left on the final climb.”

Waxing for the aforementioned trifecta of challenging weather conditions is far from straightforward. Finding a solution that provides good kick but does not allow the new sharp snow crystals to stick and slow down the ski can require trial and error. Harvey shared that the Canadian men chose to sandpaper their kick zones to create what are known as “harries” or “rub skis”. This strategy certainly paid off for Harvey.

“I think we had some of the best skis in the field,” he said. “I was able to really relax on the flats when I was following, and the fast downhill into the stadium I was able to move up … then up the hill I was able to stay in the track for most of the way when a lot of the guys were start[ing] to run outside of the track, kind of herringboning or running Klæbo style. So I was really happy with my skis and I was able to make them work. Our guys did a really good job. We have a smaller waxing crew than a lot of other teams, but today they did a really good job and it was for sure a really stressful day, so kudos to those guys.”

The only remaining U.S. skier, Ben Lustgarten (CGRP), finished 57th but hung tight in the field to finish only 38.7 seconds back.

“The mass start was awesome and it didn’t seem like the leaders could get away due to conditions and course profile,” Lustgarten wrote in an email. “I started in the second to last row, so the back of the pack had a lot of stop and go on the first few climbs. My skis had amazing kick but iced up a bit over the climbs so I could run up all the hills and pass some guys, but would lose a spot or two on the descents. The fresh snow near the end made the unskied tracks much slower so passing on the flats was nearly impossible, so the accordion action on the climbs was when I needed to make my moves. I tried to conserve energy for the last lap but I was a bit more taxed than I thought and didn’t have much on the last climb.”

“The U.S. Ski Team is supporting Ben through the Tour de Ski, and his race is the highlight of the day for us,” U.S. Ski Team Coach Matt Whitcomb told FasterSkier in a call. “He was tough out there in an Oberstdorf snowstorm, and finished 40 something seconds out of the lead, with a 19 point FIS race. This will help build back some confidence after a tough first three stages. We’re psyched for him.”

Racing continues tomorrow in Oberstdorf for the men with the TdS Stage 5 15 k skate pursuit.