Thanks to a clean shooting performance on the range and a tactical masterclass on the final lap, France’s Emilien Jacquelin, 24, was able to celebrate across the line in first place in a time of 31:15.2 minutes, after an exciting finish sprint against Norway’s Johannes Thingnes Bø just 0.4 seconds behind (with 2 penalties). 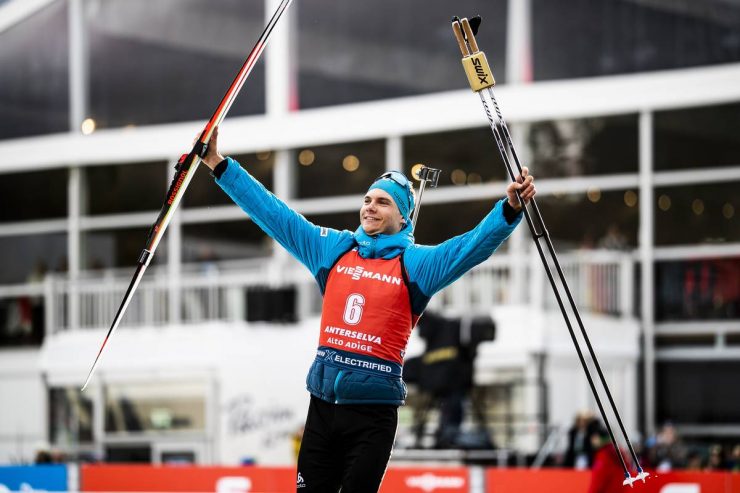 In a bit of an upset, the title in the men’s 12.5-kilometer pursuit at the 2020 IBU Biathlon World Championships in Antholz, Italy, went to the young French athlete, who had started out the race on Sunday afternoon in sixth position according to his result in the sprint a day earlier. Bø left the range after the last shooting just 0.1 sec behind, but Jacquelin consistently stayed in the lead, with the two athletes at times slowing down a bit to eye each other. At one point Jacquelin even took the time to bend down and tighten the straps of his ski boots while also loosening the rifle suspension strap on his left arm.

Going into the final long downhill stretch, Bø positioned himself to be able to attack out of the draft, but Jacquelin defended his leading position up a short climb and into the flat of the sunny Antholz arena, again packed to capacity with spectators. 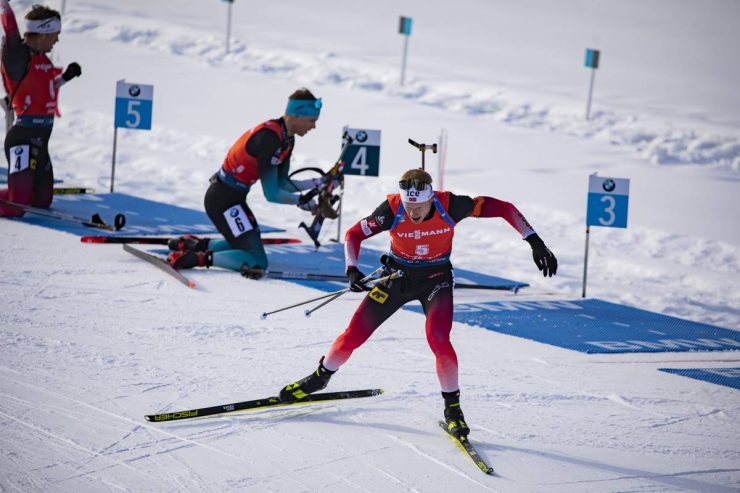 Johannes Thingnes Bø (NOR) placed second on the day. (Photo: NordicFocus)

Bø briefly seemed to lose his balance when he tried to attack, and Jacquelin managed to take the interior lane on the final right-hand turn into the finish stretch not allowing Bø to pass. With strong double poling he kept pushing hard on the finish stretch along the middle lane to widen the gap, before raising his arms several meters before the line, confident that the Norwegian would not be able to catch him anymore. It was the Frenchman’s first medal and victory at IBU World Championships. Jacquelin had also never won a World Cup race before, with two second-place finishes earlier this season as his best results.

In the post-race press conference, Jacquelin credited his experience from another sport for his finish sprint tactics: “[Bø] decided to not attack me, so I was just focused on tactics… I was a track cyclist when I was young, so I just remembered all my training. I was just focused to sprint at a good moment. …He would win for sure if he didn’t let me pass.”

Bø, usually an outstanding sprinter who dominated the prior IBU World Cup season and several early tour stages of the 2019/20 season, before taking some time off to be with his wife for the birth of their first child, was not able to withstand Jacquelin’s finish punch this time. Though he made no excuses about his interrupted training and racing period leading up to the peak of the season, and claimed he was happy about the result remarking that he was “less nervous before the world championships because of the family situation at home”.

“I put myself in position for a gold in the final shooting,” Bø said in the press conference. “I just want to have fun, that’s why I was satisfied with my fifth place in the sprint yesterday. … I could just relax today and do my best one more time and hope for a medal.”

Behind them, Alexander Loginov of Russia, coming fresh off his victory in the sprint, claimed the bronze medal position on the podium this time. He had kept his composure and his pursuers in check virtually all race, thanks to three very fast and clean shooting performances on the wind-exposed Antholz range. And while he lost a few seconds on the course on each loop he was able to ski just fast enough to arrive on the range taking his position on the first shooting lane. It already looked like with his perseverance in that game of cat and mouse the Russian had again worn out his competition. But in his final shooting stage he then missed the third target and had to ski through the penalty loop. That enabled the clean-shooting Jacquelin and Bø to pass him, leaving Loginov only with the bronze medal this time, 23.9 seconds back in the finish (with one penalty).

“At the last shooting, I thought I would fight with Johannes for the silver because I thought Loginov was first,“ Jacquelin explained, according to an IBU press release. “Afterwards, I thought, ‘Oh my God, I can win the title!’”

Loginov, who was asked the most questions in the press conference. He credited his wife and daughter for keeping him “happy and comfortable” and always trying to cheer him up during a period of intense media attention due to news about past anti-doping code violations at the 2014 Olympics hanging over the Russian team in general and questions surrounding his own prior two-year suspension. 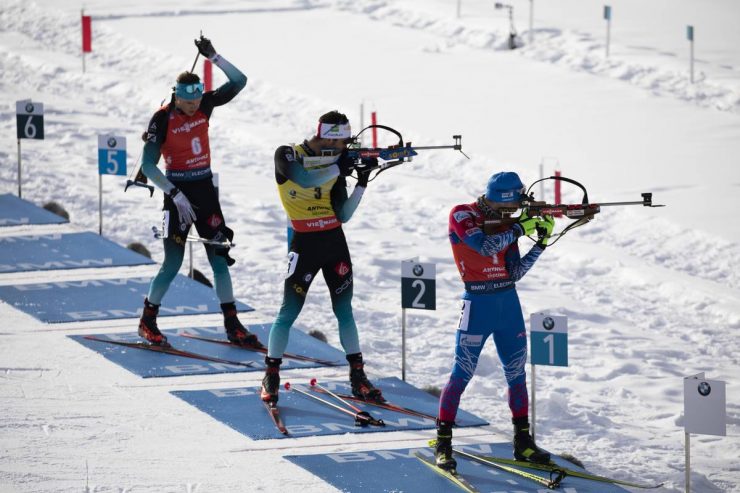 In fourth place, Jacquelin’s teammate Martin Fourcade, second in the sprint and for most of the pursuit race looking like he could at least repeat a podium finish, missed a target in each of the standing stages to push him out of medal contention. Still, when Fourcade crossed the finish line (+46.3, with two penalties) he couldn’t help but smile broadly, and instantly hugged and high-fived his younger training partner Jacquelin, who stated in the press conference that they live in the same town and have worked together for six years now.

“It’s a childhood dream, since I was five years [old] I wanted to be a champion in biathlon like Raphaël Poirée or Martin Fourcade,” the new gold medalist Jacquelin told broadcaster ZDF in an interview right after the race. “So here for me to do this today is incredible. I was able to make a great race, and it was really tough here at the World Championships. I am really satisfied about my shooting. It’s a dream realized. I just want to thank my parents who are here, thank you for believing in me and to help me reach my goals.”

For Biathlon Canada, only Scott Gow had qualified for the World Championships pursuit race among the top-60 with his sprint result, starting the race in 16th position and 1:16 minutes behind sprint winner Loginov. In his first shooting, Gow incurred two penalties, setting him back to 30th position early in the race.

In the second prone stage he managed to clean his targets, leaving the range slightly up in 28th place, but already more than 2 minutes behind the leaders. Gow’s tactic seemingly was to try and shoot fast, recording the fifth-best shooting and range times of the day overall. While the TV cameras focused on the top of the field, that didn’t quite pay off when he unfortunately shot two more misses in his first standing stage, before incurring his fifth penalty of the day in the final shooting. He finished the race in 35th position, just behind a few athletes including Russia’s Evgenyi Garanichev in a finish sprint, crossing the line 3:34.8 minutes back (2+0+2+1). For Gow, this still ranks as his best result in a pursuit race at IBU World Championships and Olympic Winter Games, improving on a 43rd place at last year’s championships in Östersund, Sweden.

For US Biathlon, Sean Doherty was the lone qualifier for the pursuit. He began the race in 44th position, 2:04 min back. His shooting performance started out on a sour note when he instantly missed his first shot in prone, before hitting the next four targets. That streak continued, with Doherty as he incurred a penalty in each of the next three stages, which prevented him from moving up more in the field despite holding up well on the course with the 35th-fastest skiing time. He finished the pursuit in 43rd position (1+1+1+1). For Doherty, it was his second-best result in a pursuit at World Championships at the senior level, having finished in 20th place the prior season.

After a rest day, the IBU World Championships will continue on Tuesday with the women’s 15 k individual before the men’s 20 k individual follows on Wednesday.