Ruka, Finland looked quintessentially Nordic at the start of the 10-kilometer freestyle pursuit. December at 66 degrees north: temperatures in the low teens (F), flat Northern light, frosted pines looking as though they were spray-coated with foam. Athletes warmed up in puffy jackets with mittens, neck warmers, and taped faces while crowds huddled with cups of soup.

First out of the start and racing in a balaclava and mittens, Norway’s Theresa Johaug attacked the course from the gate. Steadily turning up the dial on each of the four 2.5 k loops to cross the line over a minute ahead of her peers, the 31-year-old distance phenom quickly made the event a race for second place. 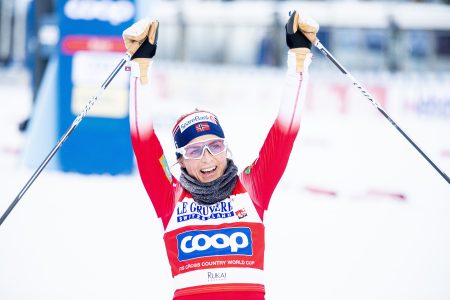 “I felt I was really strong today,” Johaug told FIS about her performance. “I heard that Heidi was fast behind me, but in the end I had a little bit more power and I also win the race today. I’m really happy.”

She also described her skis as “excellent” and thanked her wax technicians for their handiwork.

Chasing in red for an all-Norwegian podium, Johaug’s teammates Heidi Weng and Astrid Jacobsen worked together to steadily pick off the athletes wearing lower bib numbers. Weng, who started in tenth, 1:03 behind Johaug, made up 17 seconds to catch Jacobsen. By the 5-kilometer mark she was ranked 5th and closing on Finland’s Krista Pärmäkoski.

“It’s fantastic,” Johaug said of the Norwegian trio. “We have three girls top three and it’s a long time since this has happened before. We are so happy.” 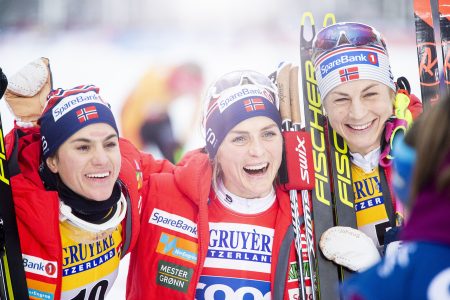 Ascending the final climb before the stadium, Weng looked reminiscent of the version of herself who charged up the Alpe Cermis to take home the 2018 Tour de Ski (TdS) victory. She had the second fastest Time of Day (ToD), outmatched by Johaug by a margin of only 8.3 seconds.

The 28-year-old was the 2017 and 2018 overall World Cup winner, landing on the podium 21 times each year. After the 2018 TdS, Weng seemed to lose a gear and though she held onto the overall World Cup win, performances that were lackluster relative to her former prowess ensued. She left the 2018 PyeongChang Olympic Games empty handed and finished the 2019 season ranked 16th with no podium performances.

Today was icing on the cake for Maubet Bjornsen who wore the yellow overall World Cup leader bib. She maintained her second place start position through the first half, then was overtaken by the pack of Pärmäkoski, Weng, and Jacobsen. Maubet Bjornsen stayed with these women through the 7.5 k checkpoint, but could not hold off the hungry Norwegians. Maubet Bjornsen ended the day in 4th (+1:27.9). 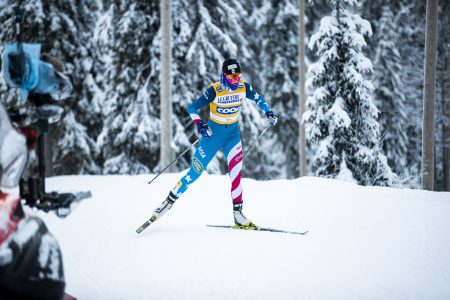 “It was another fun and final day of racing here in the tour,” wrote Sadie in an email to several news outlets. “What an honor to head out on the course in the yellow bib, that sure was fun! I found myself quite distracted off the line because I had a broken binding and my foot was sliding around on my ski, which left me so worried I was going to lose my ski on one of the downhills.

“After I made it around the first loop in one piece, I was able to forget about it, and focus on the task at hand. As I rounded the corner on the second lap, still alone, I caught sight of the huge group hunting right behind me. My plan going into the race was to hang as absolutely tough as I could if anyone caught me, and be in a place to sprint for the finish since that is my strength. As the group caught me the third lap, I jumped on, and held on for dear life. In the final lap when Heidi started attacking on the uphill, I did my absolute best, but started sinking back slowly.”

Despite ceding two positions, Maubet Bjornsen held off the remainder of the field. Hers was the 14th fastest time of day. 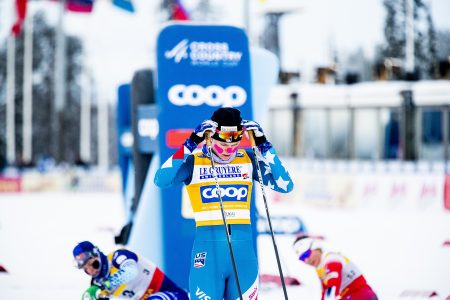 “I knew my strength would be coming over the top of the climb, and just as I clawed myself back to Astrid and Heidi, they made another surge leaving me just out of their draft for the final descent into the sprint climb. As I sprinted up that climb the final time, it was with all the energy stores I had left. I managed to cross the line, fourth in the tour. My goal was to be able to fight for the podium today. While I came just shy for a second day in a row, it is still a huge step to finish a tour in 4th! I look forward to taking some new confidence, and run with it this winter!

“Now it is time to do some resting, recovering, and traveling to Norway for our second weekend of racing. With the way my teammates are skiing right now, we should have a SUPER fun relay event ahead!!” 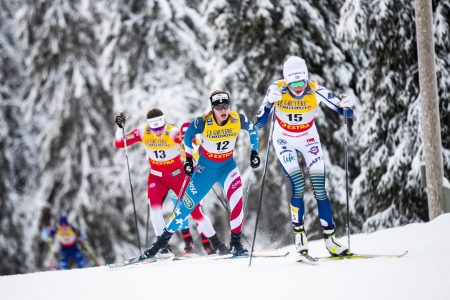 On the hunt, Jessie Diggins moves up through the field during the 2019 10-kilometer freestyle pursuit in Ruka, Finland. (Photo: NordicFocus)

Matching Weng’s spirited hunt, Jessie Diggins had an outstanding performance, advancing from her 12th place start position by seven positions to finish three seconds behind her teammate for 5th place (+1:30.9). Known for her skate talent and energy, Diggins hammered the course with a high tempo, skiing the third fastest time of day,  20.9 seconds off Johaug’s split.

“Any day I can land a TOD podium is a great day, so I’m really happy with how it went!” wrote Diggins in an email. “I just went out charging as hard as I could today, looking to hunt people down, and skied without putting any pressure on myself. It was cold out there, but having grown up in Minnesota, I just loved that and felt right at home! My skis were great today and I really applaud the wax team and coaches for working so hard every day of this season, since we arrived for pre-camp in Beito. I’m so proud of how hard they work and how well they have tackled every weather condition.”

Not landing on the overall podium right away is nothing new for Diggins. Last season, Diggins did not finish inside the top-10 until her seventh race and did not stand on the podium in an individual race until the Tour de Ski. 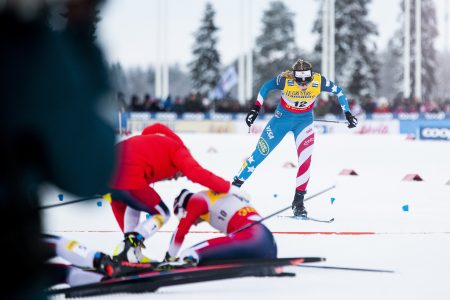 One last push across the line for Jessie Diggins during the 2019 10-kilometer freestyle pursuit in Ruka, Finland. (Photo: NordicFocus)

“I always work my way into the season and this year is no different,” she explained. “But it was a great surprise to feel so awesome today and to see a TOD podium. With no [world championships] or Games, this year I’m excited to focus on making each and every weekend that I race an absolute all-out effort, and I’m also looking forward to having so many tours this season because I think they are a ton of fun and a great challenge for the body and the brain.”

Closing out the top ten, Rosie Brennan slid back from her 8th place starting position into 10th (+2:15.3). Fighting for every second, Brennan skied a strong race, losing a four positions in the first half, then climbing back up ahead of Sweden’s Jonna Sundling and Russia’s Natalia Nepryeava before crossing the line. 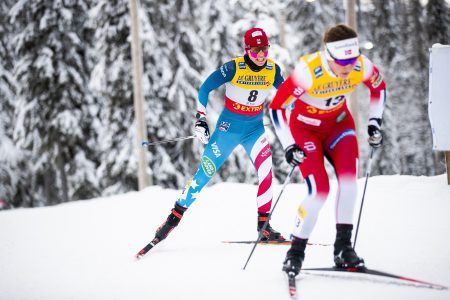 Rosie Brennan catches a ride with a Tiril Udnes Weng of Norway during the 2019 10-kilometer skate pursuit in Ruka, Finland. (Photo: NordicFocus)

“I had a tough starting position with big gaps in front of me and a small gap to the chasers behind me,” Brennan wrote to several outlets. “When the chasers caught me, I tried to follow but struggled to stay with the pack. I recollected and had a better second half of the race, passing back a few girls. It was far from my best race, but I am satisfied with the fight I put up and really thrilled to have opened the World Cup with a 10th in the Ruka Triple. That far exceeds my expectations for the weekend. It’s certainly time for a little rest after a big opening weekend and hopefully trying to find more speed in the coming weeks.”

A masked Julia Kern on course in frigid temps during the 2019 10-kilometer freestyle pursuit in Ruka, Finland. (Photo: NordicFocus)