A ribbon of snow and a winter that never arrived in Lahti, Finland. (Photo: NordicFocus)

In a typical season, you might expect late February in Lahti, Finland to look wintery. 61 degrees North latitude, ample snow on the ground and clinging to the trees, maybe even a reindeer? In fact, in a plug for the venue showed a woman skiing through a snow-laden town and arriving at the base of the towering ski jumps.

But it was not so today. Women time-trialed through the woods for two laps on a 5-kilometer ribbon of man made snow. Aerial shots of the venue told the story that winter had never arrived — green trees, bare ground, and an unfrozen lake.

“It’s sad that they have no natural snow, we’re not used to it,” Theresa Stadlober of Austria told FIS before her race. “But the conditions on the track are really good, so the organizers did a really good job and I think it will be a fair race today.”

Despite a low snow year (read: no snow year), the 5 k track in Lahti was as challenging as ever. (Photo: Screenshot FIS Broadcast)

Though some athletes, like Jessie Diggins and Sadie Maubet Bjornsen, chose to sit out the weekend of distance races following the wrap of the FIS Ski Tour 2020 across Scandinavia, the field remained relatively stout.

In fact, without Diggins, the top-10 for today’s stage looked alarmingly similar to the top-10 overall in the Tour.

Norway’s Therese Johaug, who won both the Scandinavian Ski Tour and the Tour de Ski, posted the fastest time on icy tracks in Lahti, finishing in 23:53.3. Her victory here was not a given. Her margins stayed tight at each checkpoint and a slowed down clip of her climbing a short punchy hill with a few k to go showed her slipping. 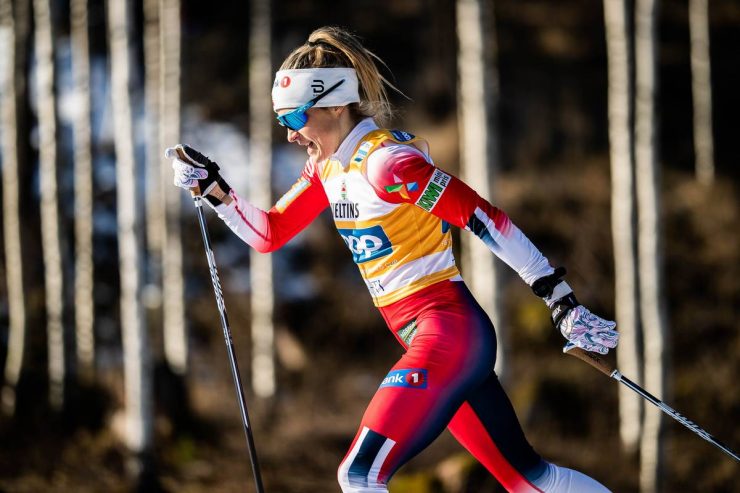 “It was really tough today,” Johaug told FIS at the finish. “It’s a hard course here, and I like that a lot, but I had to fight with myself today. Mentally, after the Ski Tour, I have been a little bit tired, but the shape is still really good so I’m really happy to stand on top of the podium again today. It was really close to Ebba, but I have the second on my side.”

With three distance races to go, Johaug has the overall winner’s Crystal globe on lock. She leads the standings with 1311 points, over 400 ahead of the next competitor — a margin that is insurmountable given the remaining point opportunities. She leads the overall standings by an even greater margin of 721 points.

Her teammate, Heidi Weng, sits comfortably in second place in both standings. Natalia Nepryaeva of Russia is third for the overall and Ingvild Flugstad Østberg of Norway is third in distance. 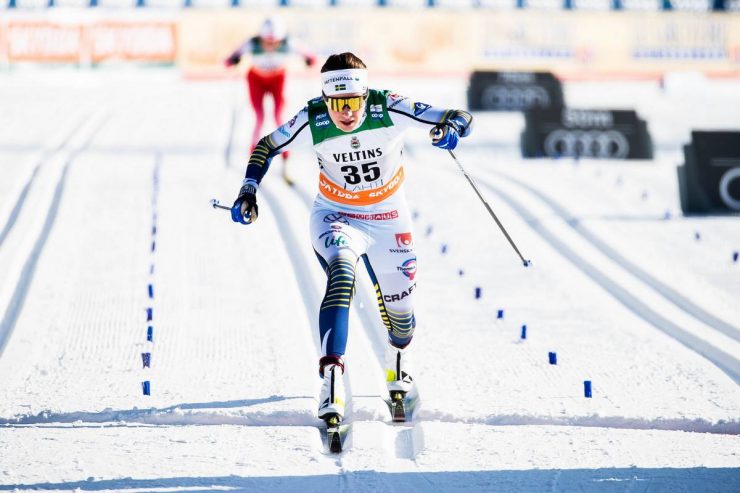 Ebba Andersson slides across the finish in second at the 10-kilometer interval start classic in Lahti, Finland. (Photo: NordicFocus)

Johaug’s primary challenger today was Sweden’s Ebba Andersson, who started six bibs behind and kept herself within four seconds of the Norwegian throughout the majority race, finishing 3.4 seconds back for second place. Andersson was fourth in the Ski Tour and sits in the same position in the distance standings.

Finishing third in Lahti was Krista Pärmäkoski (+11.8). Though the Finnish veteran has a list of podium finishes and Olympic medals to her name, she has not cracked the top-3 in an individual event since January, 2019 when she took third at the final stage of the Tour de Ski (she has had top-3 results for time of day). 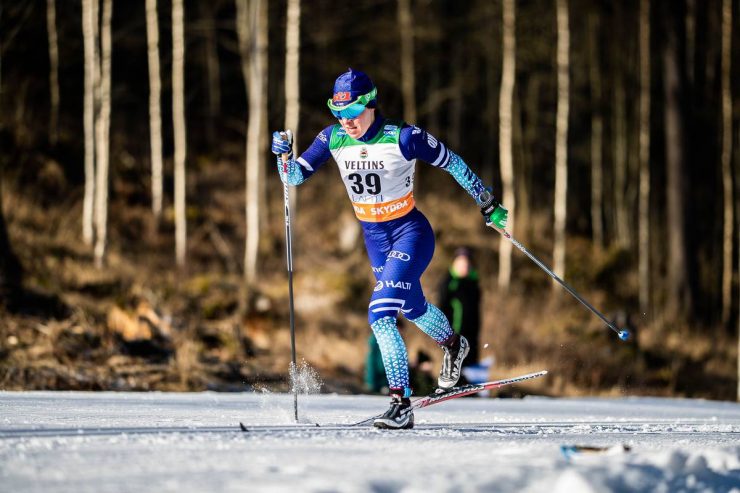 Krista Pärmäkoski kicks her way to a season best performance and podium in her home country. (Photo: NordicFocus)

Pärmäkoski looked like a metronome, covering the tracks with a smooth and steady kick-glide rhythm. Her only falter was untimely. Rounding a sharp downhill curve just before the finish, she found herself on the far edge of the turn where the chunky edge of the of track abutted the bare ground of the hillside.

The Finn fell to the ground, losing momentum that could have put her higher on the podium. Nonetheless, as she pushed the final meters across the line, the volume in the stadium surged, blue and white flags waving wildly, putting a smile as her face as she caught her breath. 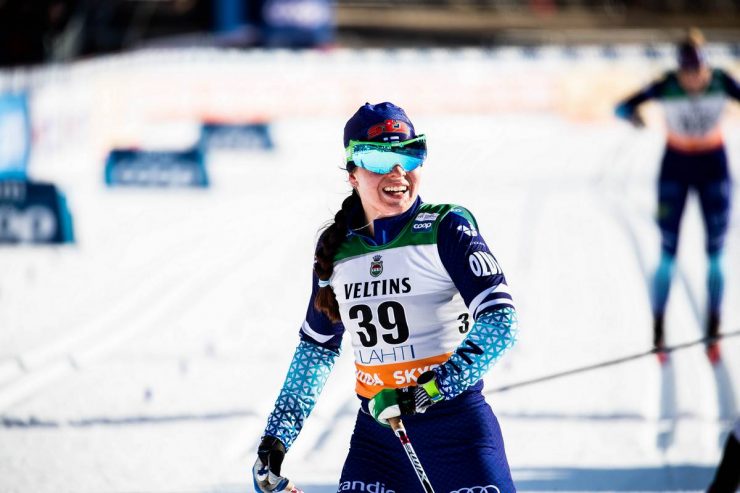 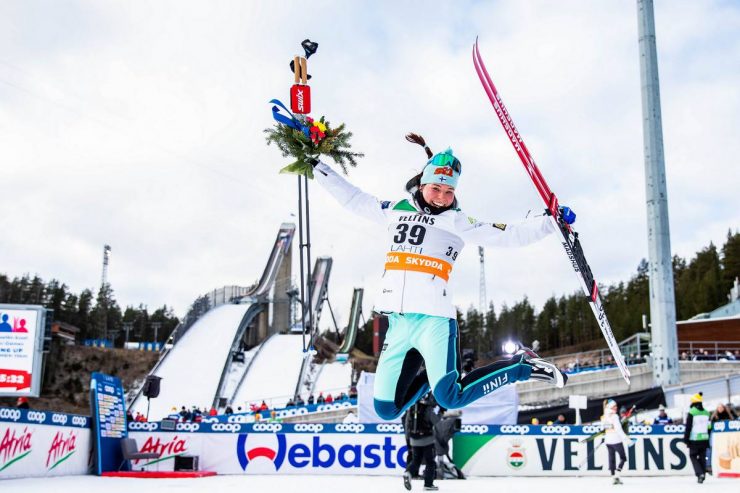 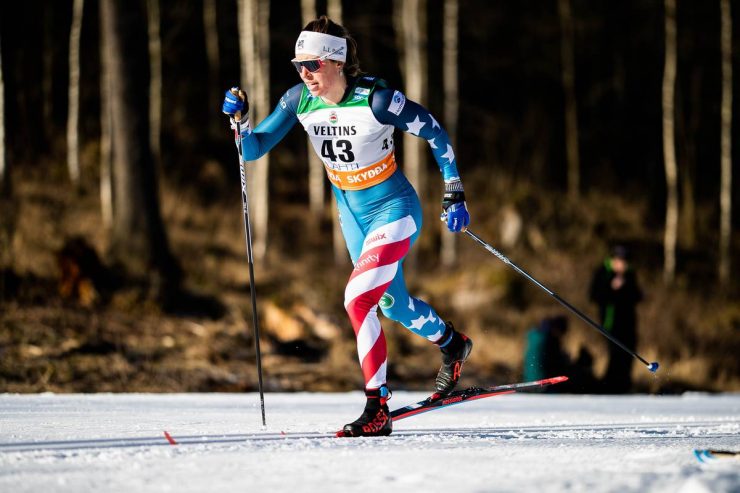 “There is not a flake of natural snow around Lahti, so it’s amazing that they were able to put together a full 5 k course that was all hard packed man made snow,” wrote Brennan in an email. “I felt pretty good for somewhere around 4 k’s and then fatigue hit hard. I did my best to keep moving well but unfortunately, I did lose quite a few positions… I think I am definitely feeling some tour fatigue but more so just season long fatigue as I’ve haven’t been home since mid November. I happy with how I skied all considering and certainly am optimistic that with some rest I can have a strong finish. I am headed to Park City now to rest and prepare for Canmore.” 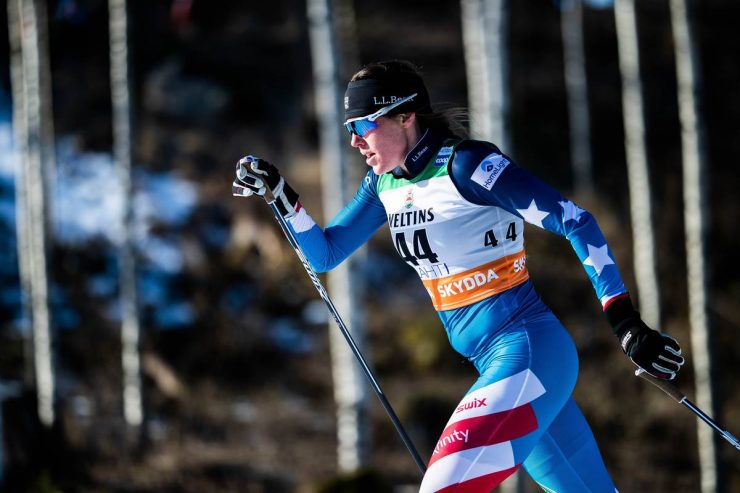 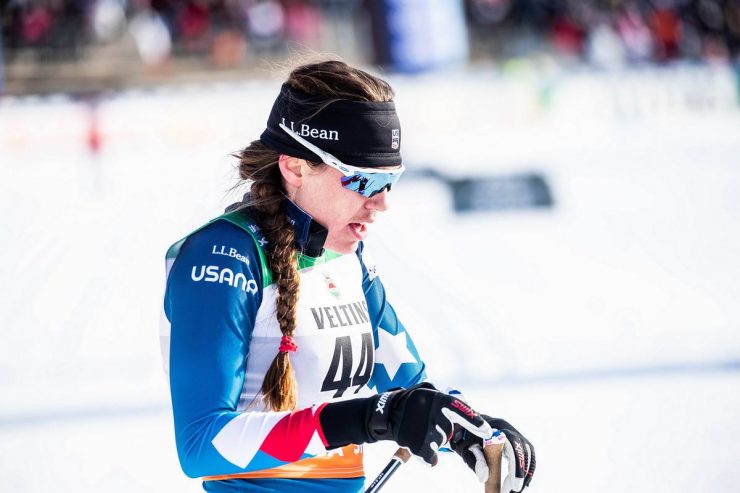 Today was Rorabaugh’s first European World Cup start. Though the 30-year-old was first raced a World Cup in February of 2010, her only other experiences at that level have been in Quebec and Canmore during Canadian Ski Tours or World Cup finals.

“I really enjoyed the World Cup level downhills and the perfectly firm tracks out there,” wrote Rorabaugh in an email. “Our wax guys nailed it for me so I was able to ski with a few different people, but it was a tougher course than what I’m used to in the US.  This was definitely a step up in steepness of pitch and amount of climbing, and I’d love to have more domestic opportunities to work on this kind of thing. The crowds were awesome and it was cool to see all the national pride with Finnish skiers on both podiums.  I’m very thankful to have had the opportunity to come over and race against such a strong field in such great conditions. I’m also excited to have more World Cup starts coming up!” 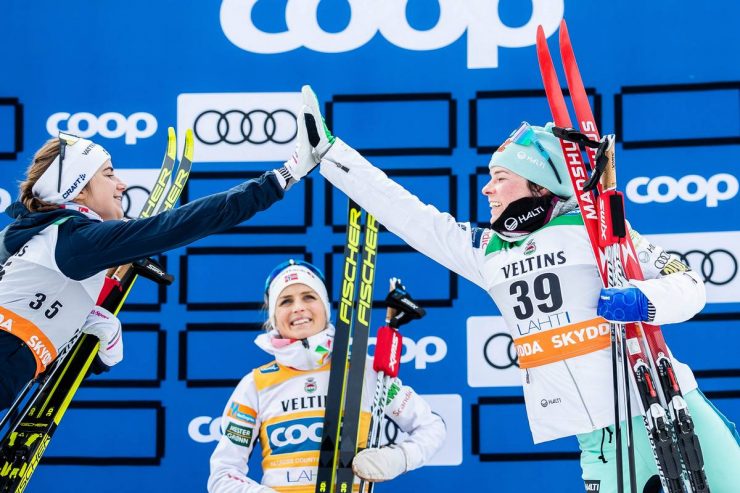 Ebba Andersson (SWE) and Krista Pärmäkoski (FIN) exchange a high five as they join Therese Johaug (NOR) on the podium in Lahti, Finland. (Photo: NordicFocus)