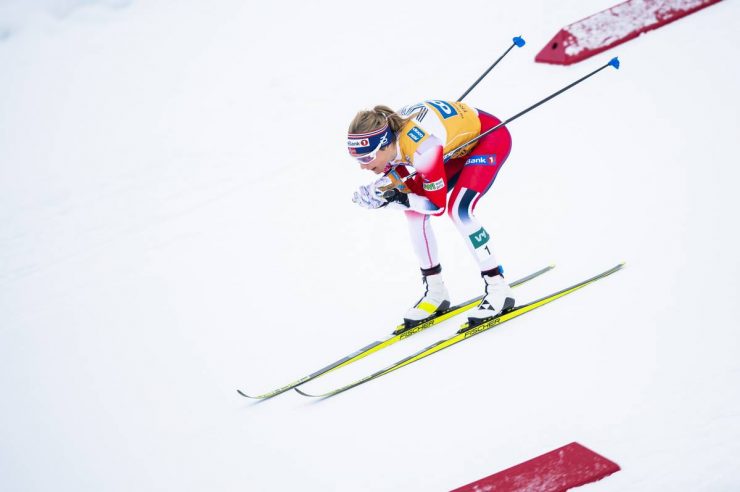 We’ll start with the weather: think all over the place. A moving target for meteorologist with moisture spitting from the skies, and air masses swirling this way and that making the trees sway like a mamba line along the course. A wax tech’s nightmare scenario? Yes. It certainly trended in that direction.

By all measures, this was Therese Johaug’s, Norway’s latest version of a cross-country skiing record-breaker, stage and tour. Of six stages total, she won five outright, with the lone exception, Saturday’s Stage 5 classic sprint in Trondheim.

Stage 6 featured a 15 k classic pursuit. Call it a pursuit, however, on the race’s sharp end, this was a runaway. Although the field was, in theory, pursuing Johaug, she simply put more time into her challengers on Sunday. She began 2:33 ahead of Norwegians Heidi Weng in second, while Ingvild Flugstad Østberg set off another second back.

Johaug expanded her lead at the finish, by over a minute, to Weng and Østberg. Johaug won the pursuit in 41:13.8. Weng placed second (+3:40.8) with a slight gap over Østberg, who toed the line 0.7 seconds further back. Sweden’s Ebba Andersson, the day’s fourth starter at 4:48, lost time to0, finishing 5:54.3 back to end the Ski Tour in fourth overall.

“I felt really good today and the waxers had done a really good job the whole Ski Tour and today as well I have the perfect skis,” Johaug told FIS after the race. “When the skis are good and the shape is good I can just go out there and enjoy all the people that come here and cheering us.” 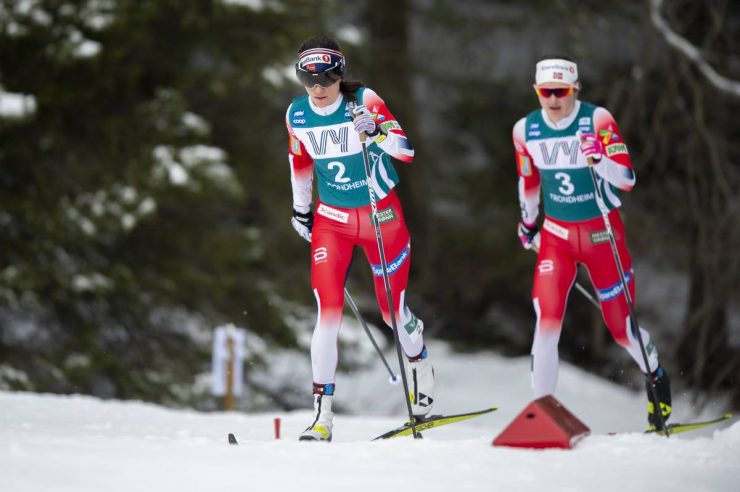 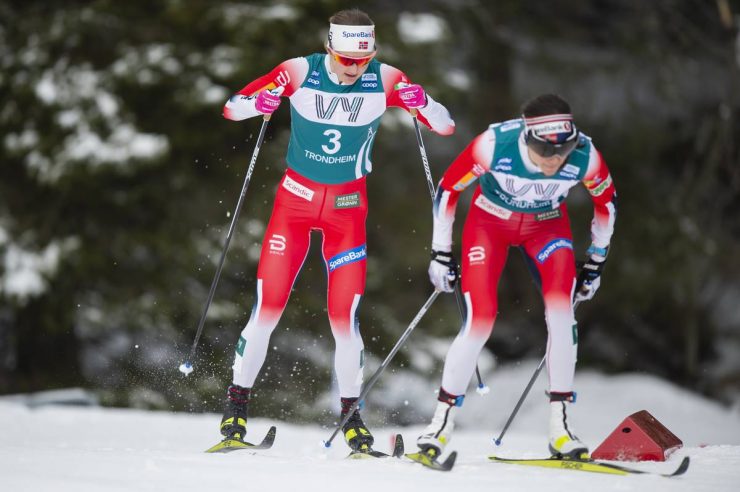 As far as time of day, Johaug took that prize as well. However, Norway’s Astrid Uhrenholdt Jacobsen placed fifth overall and had the second-fastest race time, 44.8 seconds off Johaug’s winning mark. Krista Pärmäkoski of Finland notched the third-fastest time of day (+1:04.4).

“Today, like yesterday, was a crazy day in terms of weather and waxing. It kept snowing on and off, the sun coming out and then the wind picking up as more snow came down! I was pretty much skiing an individual start race as I was alone the entire time, but I was really proud of my pacing and efforts as I held my placing without anyone to work with. There was a really tricky time in the middle of the race when the skis weren’t kicking very well (for much of the field, I think) but I was able to refocus and reset and keep pushing as hard as I could.

“As for the overall tour, I’m really happy with my efforts and how I hit my goals for every race. One of my big goals was to see each day as an entirely separate opportunity and to not put pressure on myself for the overall tour, since there are so many factors that I can’t control that play into that placing. But by hitting my own process goals for each race and staying consistent I was able to have a tour that I’m proud of.

“I’m really proud of our tech team and coaches for their tireless efforts day in and day out through this tour. It’s been exhausting but they’re the hardest working guys out there!” 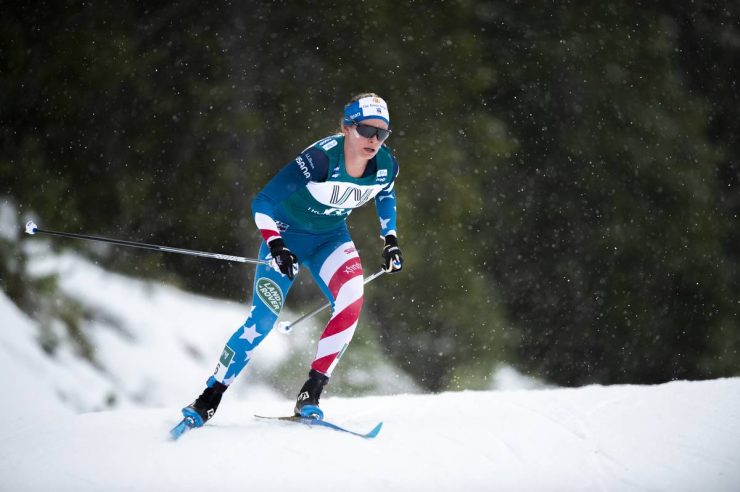 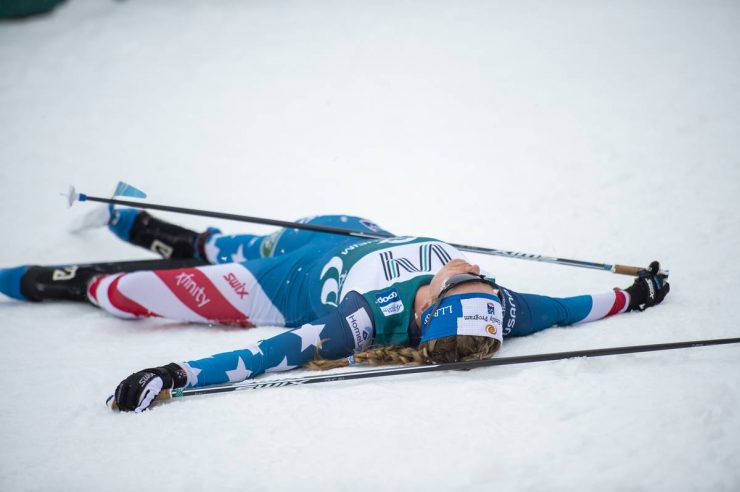 Sadie Maubet Bjornsen ended her tour in 10th (+9:43.8). With the big time gaps, the second wave of skiers (the mass start) began with Pärmäkoski in bib 13, starting at 8:08 back. Maubet Bjornsen (bib 12), began 16 seconds ahead and was the initial target of the wave starters. Maubet Bjornsen held off a charging Pärmäkoski for over 5 k.

“Wow, I made it!! That was one heck of a tough tour! Things were looking mighty rough to begin with, but I knew I had to just keep fighting and believing!,” Maubet Bjornsen emailed.

“But among some challenging times, there were some glimmering hopes in there. Tours are my favorite types of racing, because you have to be so resilient and such a fighter. Day after day, you have to put your fatigue and emotions aside, and just stay so positive.

“The tummy troubles at the beginning of the tour were particularly tough! It was scary to start a tour so depleted, but I was thankful we had our nutritionist, Susie Parker Simmons around to help me stay on my feet! From there it was just a matter or fighting for every second from there on.

“Today was a totally wild scene! Conditions were constantly changing, and it was hard to find the perfect skis! I knew the name of the game was to just keep fighting, because everyone would be struggling at some point out there. I managed to find something to work, and went through some highs and lows out there in the 15k which brought me to 10th overall in the tour! I’m super happy and satisfied with that, given the little fatigue hole I had to crawl out of this past month. Thank you to our team for helping make a tricky classic day at the finish of the tour possible to fight with the others.

“I’m looking forward to taking a rest now, and finding the energy to finish the end of the season strong, for the third tour of the season.

“And of course, hugest thanks to the staff. We couldn’t race day after day like this without them!!! They are the heroes.” 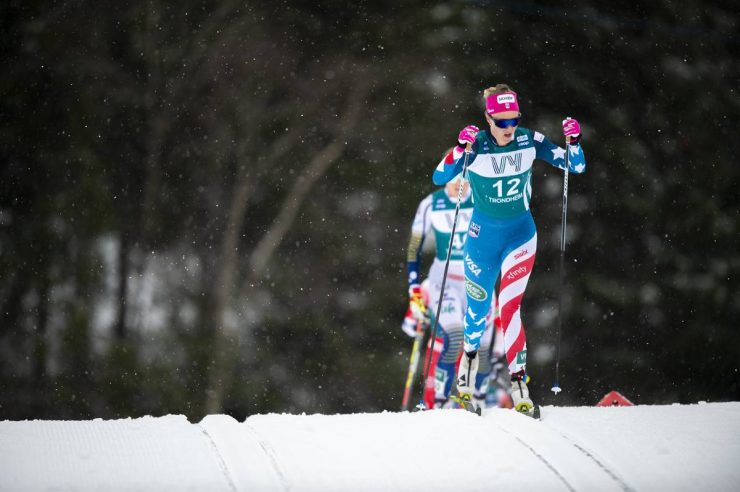 “Today was a very challenging day,” Brennan wrote in an email. “Due to the massive time gaps in the overall, the wave started at bib 13 so I had a big pack starting not too far behind. The conditions were very challenging with snow, sun, rain and everything in between and some very icy tracks. I did my best to stay in front of the wave but just didn’t have the skis or the energy to make it happen today. I am very disappointed in myself. After having a great tour, it was hard to end on this note, but I am doing my best to look at all the positives from the tour as a whole and make a nice little work list to improve on the things that were so tough today.” 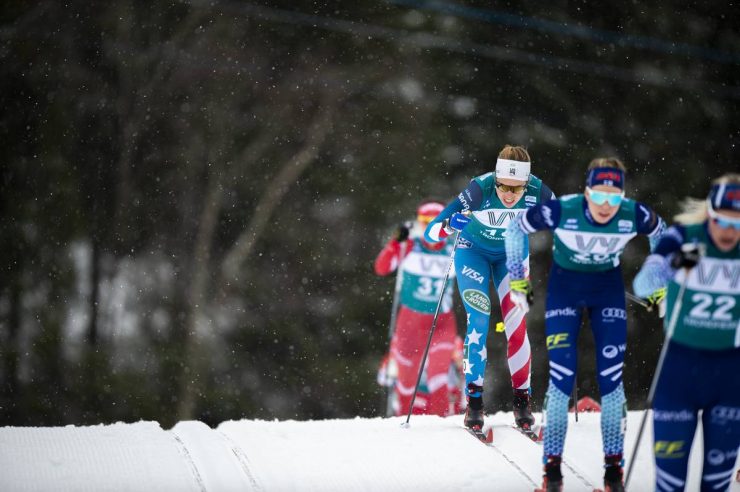 Rosie Brennan (stars and stripes) during Stage 6 of the Ski Tour 2020. (Photo: NordicFocus) 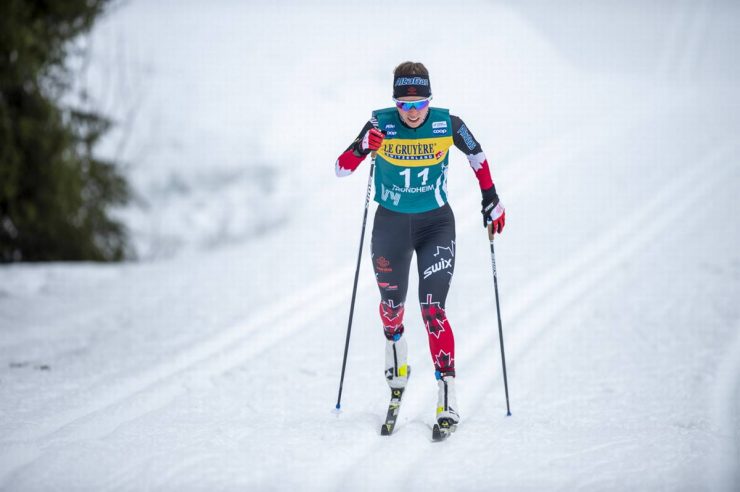 Katherine Stewart-Jones during Stage 5 of the Ski Tour 2020. (Photo: NordicFocus)

This stage concludes the Ski Tour. Racing continues in Lahti, Finland next Saturday. 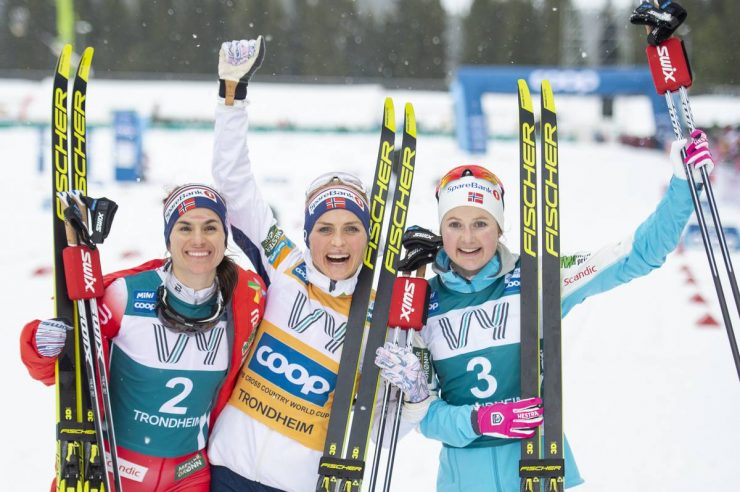