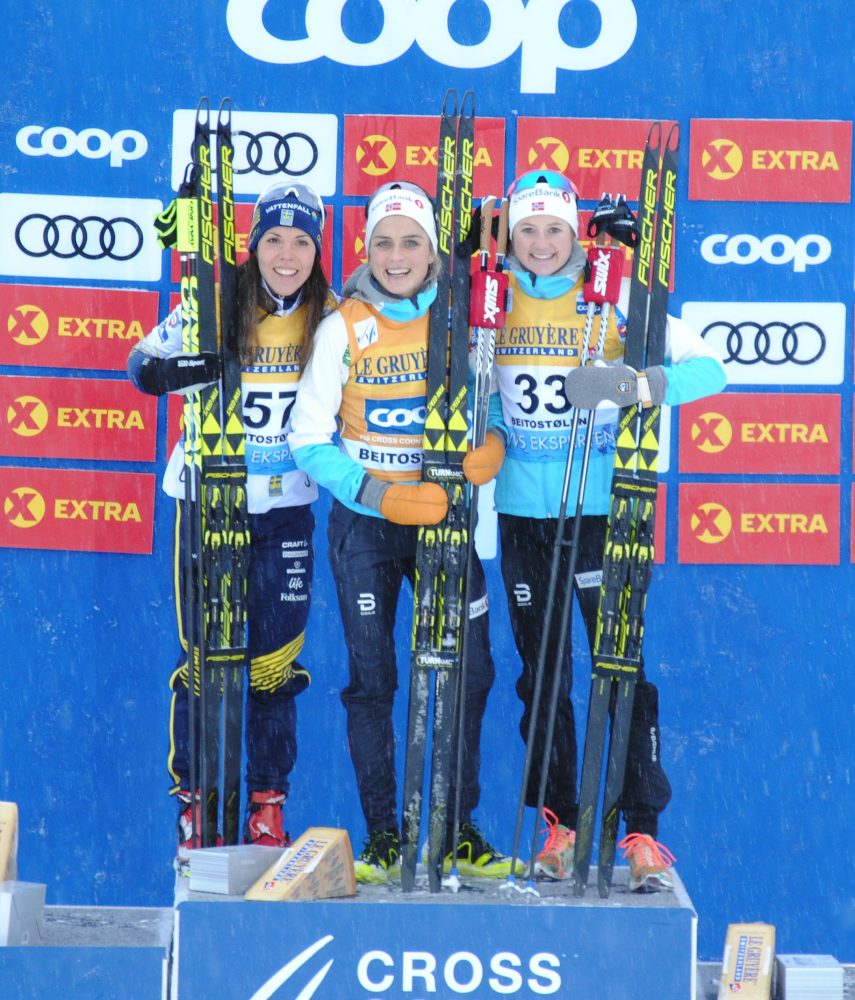 On a day when winter felt like winter, snow fell throughout the race and temperatures hovered around 20 degrees Fahrenheit, Johaug’s shape was never in doubt. Absent two seasons from the World Cup after testing positive for banned steroids in her system, Johaug is back with a vengeance. And when the shape is good for the now 80-time podium finisher in World Cup distance races, we all know how the results look.

Johaug took her fourth win on Saturday in as many distance races this season on the World Cup. In Kuusamo, Finland, Lillehammer, and Beitostølen, Norway, Johaug crushed. Her tempo and raw fitness are leaving only second and third places on the podium to be decided as the season’s distance races unfold.

“I think that was my best race this season,” Johaug said to FIS. “I had good energy all the way. I am really happy to be atop the podium here again in Beitostølen. I think this is my place.”

If each time check today were a microcosm, the gains on the would-be-podium placers only increased at every checkpoint. Johaug never let up, the field could only attempt to temper the damage.

At 5 k, Johaug was up 26.1 seconds on Sweden’s Ebba Andersson who marked the second fastest split. At 10 k, the start of lap two of three, the gap to second place skier Andersson was 47.8 seconds. (Andersson faded slightly in the final 2.8 k to place fourth, 1:08.8 minutes back.) For now, at least, Johaug appears to be racing against her own benchmarks of fitness while the remaining stars of the sport minimize time back to a runaway skier.

Johaug is on a record-setting pace. During her last full season on the World Cup, 2015/16, Johaug won a record 12 individual races. We are starting to see this season that unless Johaug withers from an early season fitness peak and the chasers come into form later this season, she could simply run away with a few World Cup globes. She leads the distance and overall World Cup standings.

For Kalla, her second place in the 15 k skate was her best ever in the discipline. Back in 2013 in Davos, Switzerland she finished third in the 15 k skate. Kalla sits second in the overall World Cup with 369 points, trailing Johaug by 131 points. Today was Kalla’s third podium of the season. She finished fourth on one other occasion. 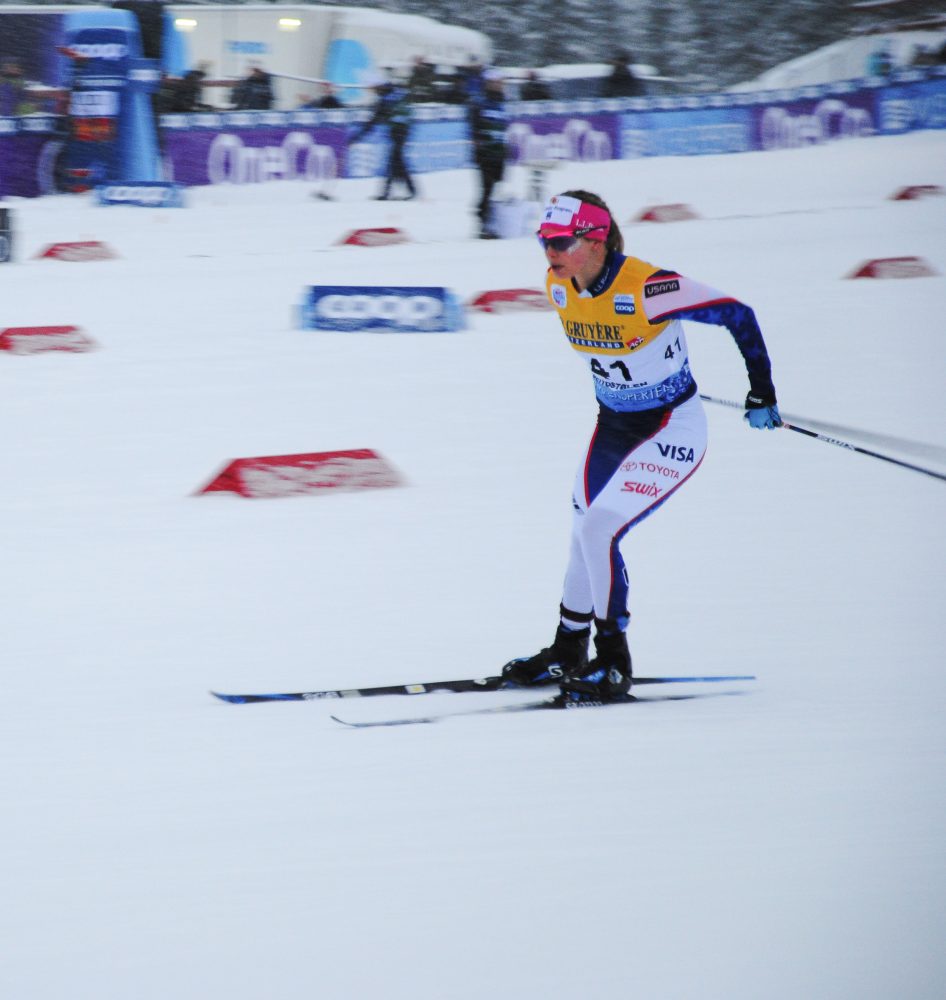 The U.S. Ski Team’s Jessie Diggins had her best result of the season finishing in eighth place, 1:29.6 minutes behind the day’s winner, Johaug. From a pacing perspective, Diggins was consistent. At the 6 k, 10 k, and 12 k marks, she was locked in seventh place. Coming off a cold that affected her performances last weekend in Lillehammer, Norway, Diggins told FasterSkier in Beitostølen that her sensations were coming around.

“I felt better than last weekend, Diggins said. “I started to feel more like myself. Which is nice because I was definitely still sick last weekend, so feeling healthy was really nice and I felt like I could really breathe out there. That was really positive and I had some really good skis and I just went out there and I kept trying to focus on skiing every part of the course as smart and as good as I could. And focus on my technique and so I was happy with it. It was a step in the right direction. … We are still in period 1. I think I am in a pretty good place right now and I am where I need to be.”

Diggins had her first podium last season, a season when she placed second in the overall World Cup, on January 1, during the Tour de Ski’s third stage 10 k skate pursuit in Lenzerheide, Switzerland.

Sadie Bjornsen (USST), finished 13th (+(+2:22.9) for her sixth top-15 of the season on the World Cup. Bjornsen’s best finish thus far was a third place in Lillehammer’s skate sprint.

“I feel worked,” Bjornsen said in the mixed zone. “That was definitely a very very challenging race out there today. I think what makes it challenging [for me] is the flat terrain. There’s just no recovery out there and especially with falling snow it is extra difficult to move across the snow and so today was just race of toughness for 15 k.”

Of the tough conditions due to the freshly fallen snow, Bjornsen noted her skis felt solid. Her legs, on the other hand, were fatigued. Additionally, Bjornsen, who lives in Anchorage, Alaska, a community that suffered a major earthquake last week, has had home on her mind.

“I felt like my legs were particularly tired today,” Bjornsen said. “I think it has just been a long week with a lot of things going on. So I think I have to set a goal next week to not have any stress or my mind on anything about home, so I can truly recover.” 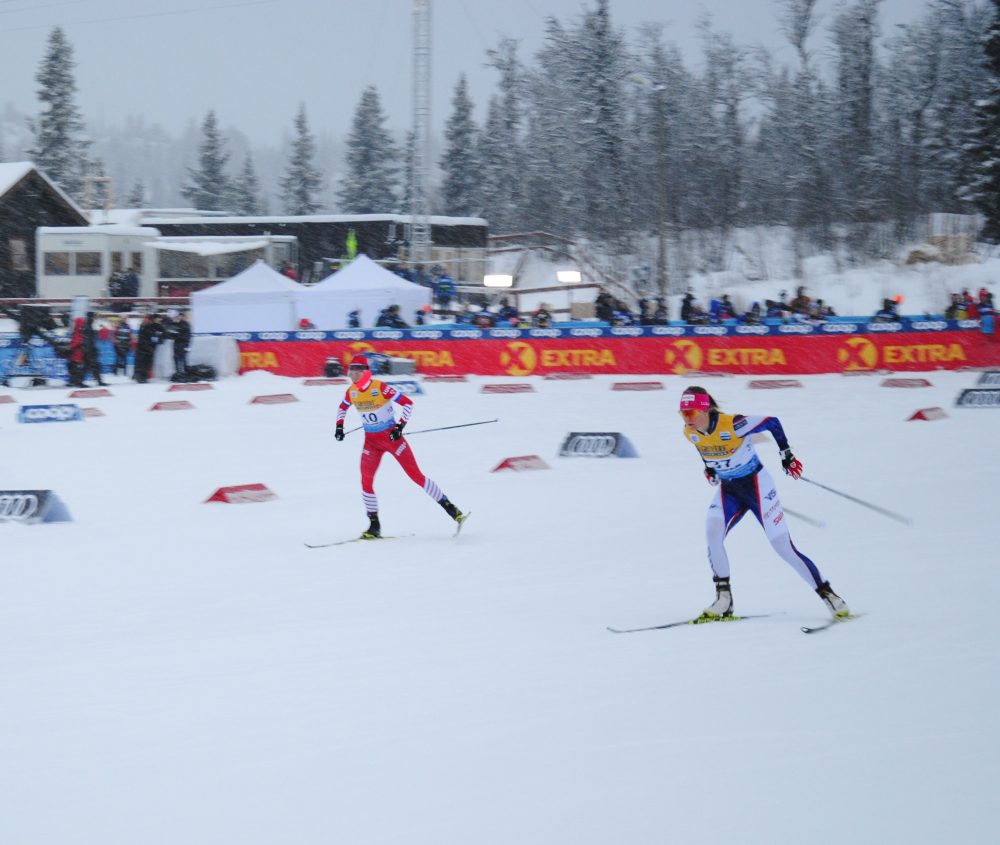 Bjornsen is ranked ninth overall on the World Cup.

“I am definitely getting a little tired from all the racing, especially after the mini-tour last week,” Brennan said after the race. “But I am happy with my shape and I think I can hold through one more weekend and then I will get a little rest.”

Despite earning the 15th best time after two laps, and maintaining that position at the finish, Brennan explained, like many skiers, the third lap was difficult.

“I was really happy with my first and second lap but I wished I would have had a little bit more energy to give on the last lap,” Brennan said. “I just tried to keep a steady pace and always be trying to make up a little time here and there. I mean it is slow out there so there is just more work. It is the same for everybody.”

Caitlin Patterson, skiing for the U.S. and training with the Craftsbury Green Racing Project (CGRP), placed just outside the points in 32nd (+3:46.0).

“It was a good fight,” Patterson told FasterSkier in Beitostølen. “This is a fun course. I liked a lot of the working gliding sections and I think I skied the transitions better than I have in other races. I am feeling fairly solid about it. I was getting some good reinforcing splits out there.”

Patterson explained she is feeling good while still adjusting her skiing and looking for that top-end World Cup gear.

“I am smoothing out the way I am racing with better transitions now,” Patterson said of her racing. “The fitness still feels like it is coming around. Last year, I felt like I had a little more than a top gear than I have tapped into this year. It’s still coming around.”

Emily Nishikawa of the Canadian National Team (CNT) was the best placed Canadian in 34th (+4:01.6). Cendrine Brown (CNST) was 38th (+4:16.4). This was the first World Cup of the season in which Canada has entered a women’s team.

“I am happy with this start to the season,” Nishikawa wrote in an email. “I am encouraged by my race and know that I have some room for improvement next weekend in Davos.”
Both Nishikawa and Browne spent time in Davos, Switzerland, the site of next weekend’s World Cup, prepping with a pre-race season camp.

The U.S. has eight women in Beitostølen and will field two women’s teams in Sunday’s relay. Team one will consist of Bjornsen, Brennan, Patterson, and Diggins.  The second team will feature Sophie Caldwell, Ida Sargent, Kelsey Phinney, and Kaitlynn Miller.