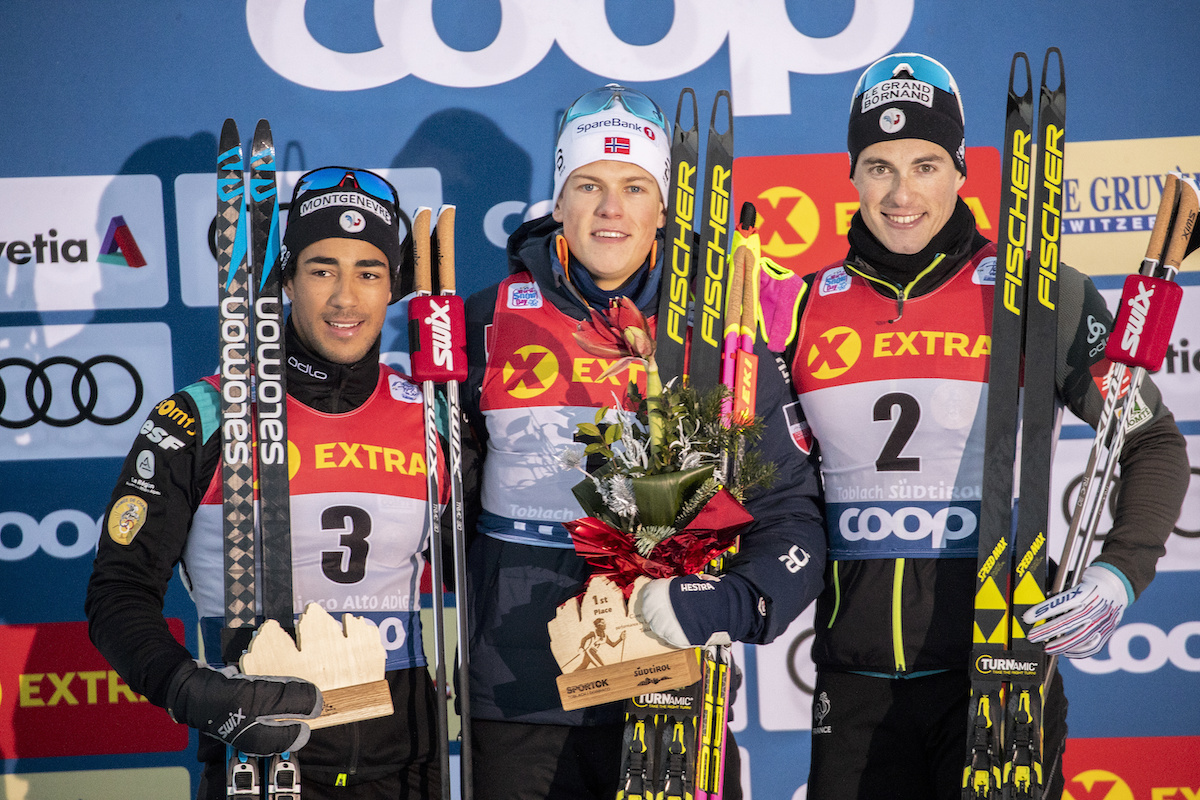 *Note: This article has been updated to include comments from U.S. Ski Team B-Tean member, Kevin Bolger

Without the visual of the grey and white U23 marker next to his name on an FIS results sheet, it’s easy to forget Norwegian Johannes Høsflot Klæbo is still under 23 years of age. As the Tour de Ski (TdS) celebrates its 13th edition this year, the twenty-two-year-old Klæbo (he celebrated his 22nd birthday this October) is only in his first TdS. He did not start last season’s 2017/2018 Tour. Nor did he start the 2016/2017 TdS. His debut World Cup race came in the spring of 2016.

Even so, by the opening race of this season’s TdS, a 1.3-kilometer freestyle sprint in Toblach, Italy, Klæbo maintained the composure of a seasoned Tour veteran. A skier used to winning and ready to do it again.

He started by posting the day’s fastest qualification time, placing first in a time of 2:16.86 minutes.

Klæbo then advanced to Quarterfinal 1, exchanging the lead with Russia’s Sergey Ustiugov for the first half of the sprint loop, before taking command and eventually duking it out with France’s Lucas Chanavat and Norwegian Sindre Bjørnestad Skar in the finishing stretch. 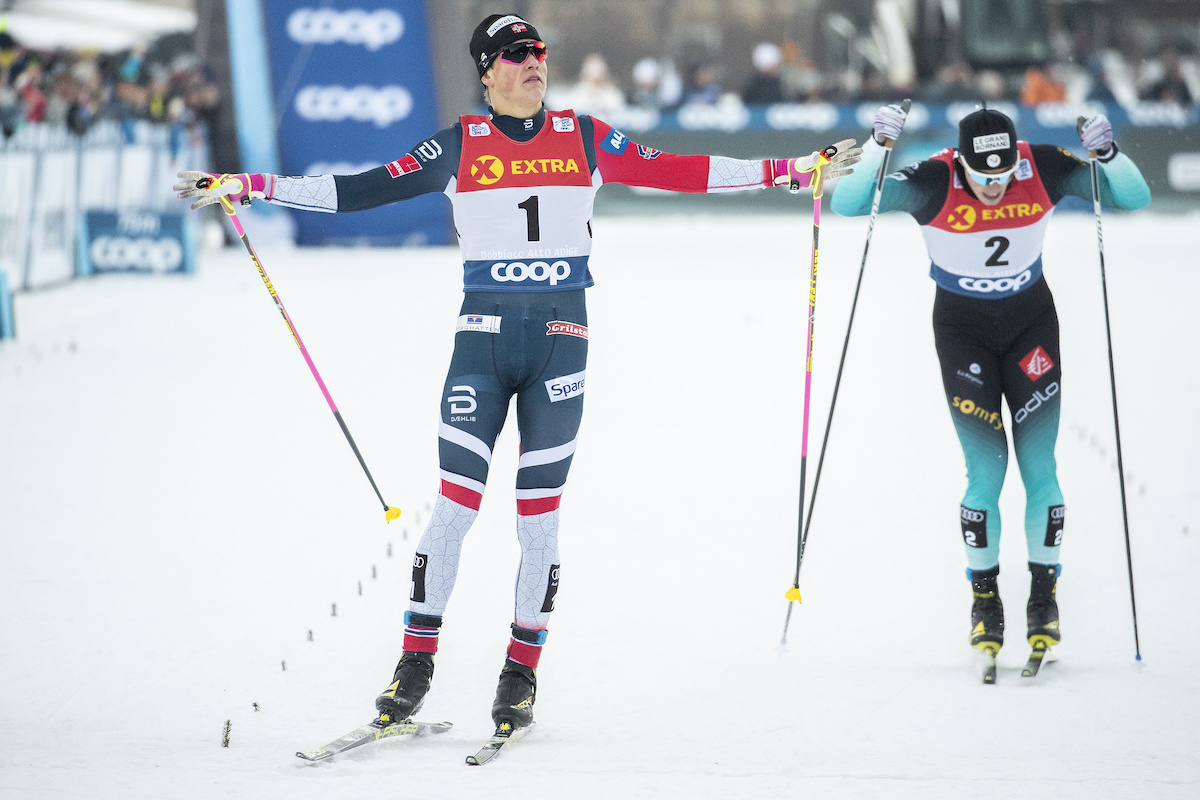 Klæbo eventually won that quarterfinal, crossing first in a time of 2:19.71 minutes, just ahead of Chanavat. Both he and the Frenchman advanced to semi-final 1. Skar squeaked into the second semi as a Lucky Loser thanks to the heat’s fast times.

In the first semi-final, Klæbo once again took the lead from the start. He was shadowed closely by Chanavat and Italy’s Federico Pellegrino until the course’s second climb. There, the Italian made a push to the front, but by the bottom of the following hill, Chanavat had maneuvered his way around Pellegrino to take the lead. As the first semi-final skiers cornered into the finishing stretch, it was a four-skier battle between Chanavat, Pellegrino, Klæbo and Norwegian Eirik Brandsdal.

Chanavat took the semi final win. Crossing behind Chanavat, Klæbo (+0.07) bested Pellegrino (+0.10) by 0.03 hundredths of a second to advance to the final. Pellegrino did not move on.

By the time the men’s final rolled around, the line up included three Norwegians, two Frenchman, and a Russian. Norway’s Emil Iversen and Skar had advanced to the final as the two Lucky Losers from the second semi, which was won by France’s Richard Jouve followed by Russia’s Alexander Bolshunov.

From the start of the gun, it was Klæbo in front in the final. Clinging to his skis were Jouve and Bolshunov as the group headed toward the first climb. Klæbo maintained the leader’s pull just until the top of the climb, where Bolshunov positioned himself in first for the descent. Rolling into the second short climb, Bolshunov and Klæbo went head-to-head. Lurking just behind them was the French duo.

As they headed into the third climb, Chanavat moved to the outside right of the group. Jouve followed. By the time the final field crested the last climb on course, Klæbo was positioned in first, Jouve in second and Chanavat in third.

A final sling around the curve to the finish revealed Klæbo flurrying to hold off the attacks of Chanavat and Jouve. His efforts paid off and the Norwegian finished the sprint, his first TdS race, in first in a time of 2:17.99 minutes. Chanavat crossed 0. 34 seconds behind Klæbo for second.

The top-three performance is Chanavat’s first this season. He now has five individual World Cup podiums, all in the freestyle sprint discipline.

Crossing a mere 0.05 hundreths of a second behind Chanavat was Jouve in third (+0.39). The podium is Jouve’s sixth in the top three (fifth individual) all of which, like his compatriot, were in the freestyle sprint discipline.

Rounding out the top 10 was Pellegrino in seventh, Brandsdal, in eighth, Sweden’s Oskar Svensson in ninth and Norway’s Finn Hågen Krogh in 10th. 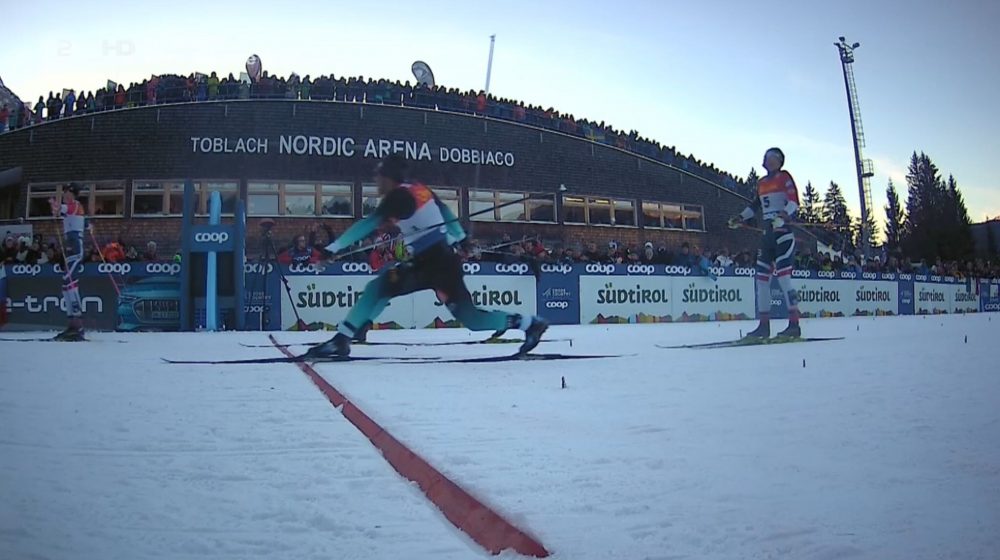 Two Americans qualified for the heats, with Simi Hamilton qualifying in eighth (+3.00) and Kevin Bolger of the U.S. qualifying in 13th (+3.98).

Hamilton, who advanced to the second quarterfinal, looked strong for the first two-thirds of the course. However, in the last climb of the sprint loop, while moving from fifth to third, Hamilton fell. The crash cost him advancing to the semis and he crossed his heat in sixth, ending the day’s sprint in 26th.

“I think he unfortunately just took himself out,” U.S. World Cup head coach, Matt Whitcomb said during a phone conversation. “From the side angle, it looked like he just started getting a little bit too far forward. He thought he might have hit something…But it was a bummer because he had a really speedy qualification and was just positioned perfectly to move on and was feeling great.

“It’s one of those instances where you can be disappointed but not discouraged because he’s where you want him to be,” Whitcomb continued. “He’s in a place where he’s good enough to be on the podium, can certainly ski with the best, but unfortunately that didn’t unfold today.” 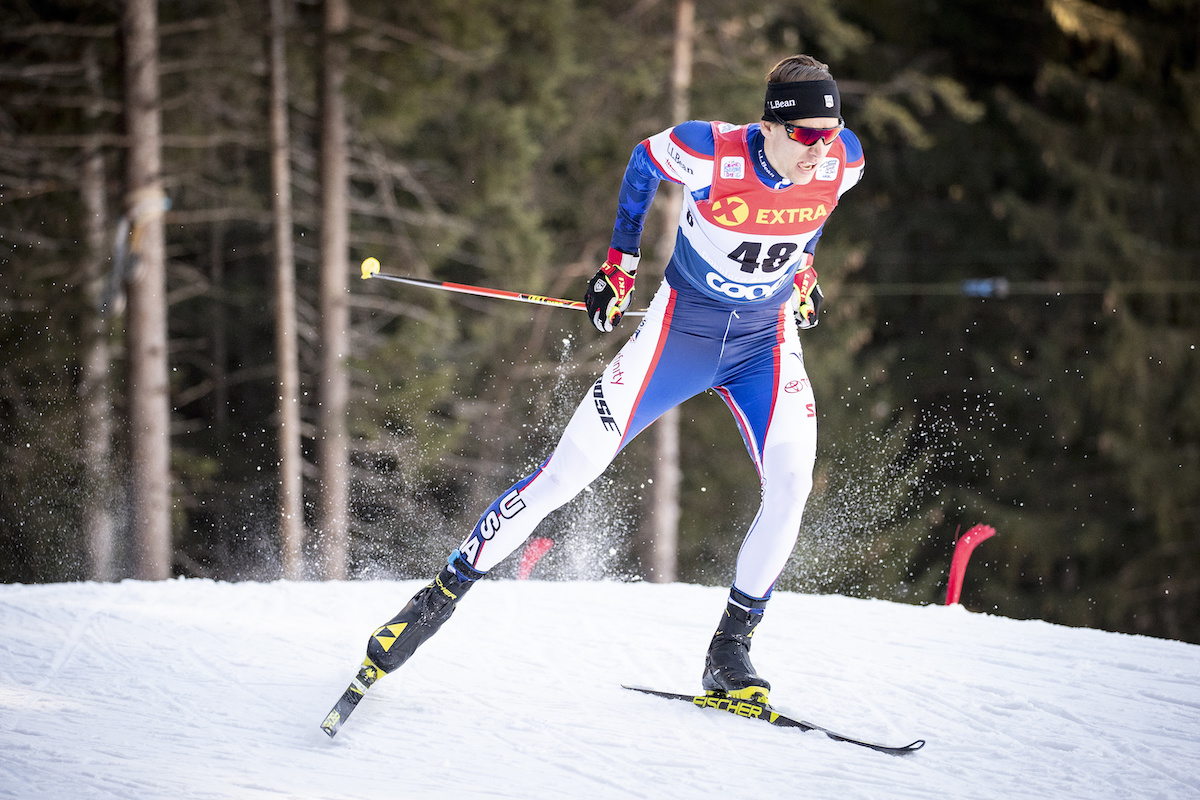 Bolger, who advanced to the fifth quarterfinal remained in contact with Swedish skiers Karl-Johan Westberg and Viktor Thorn and Russian Alexander Bolshunov, who lead through the first and second climbs. Bolshunov picked up the pace on the second hill, pulling the rest of the field with him.

“I kind of assumed Bolshunov would want to take command of the heat, and he did from the start, and then he put in that surge just over the top of the second climb, I felt like I was ready but not in the best position to react, and was able to get back in contact with the group over the last climb, but making a move from there was tough,” Bolger wrote in an email to FasterSkier on Saturday. “We had one of the fastest heats of the day, if I was in any other heat I think I would have qualified.”

The Russian crossed the quarterfinal first with Poland’s Maciej Starega holding onto him to cross in second. Bolger eventually crossed in fifth for 21st on the day.

“Really exciting to see Kevin qualify,” Whitcomb said. “Watching his qualification rounds, he must have skied one of the fastest first climbs. His V1s were absolutely lightning fast. We’re really impressed with his trajectory throughout Period 1 getting gradually faster and faster and almost being there in Davos and he’s clearly there now.”

Two weekends ago, Bolger finished the Davos, Switzerland sprint in 31st, just one place outside of qualifying. These were the first heats of the season in which he qualified.

“I was excited, but also relaxed,” Bogler wrote of how he was feeling. “I don’t feel like a newbie in the world cup heats anymore, I’ve had experience. So I wanted to ski aggressive and attack and be in the mix from the start.”

“I will be dropping out of the tour after the 3rd stage, along with Simi, and Sophie,” Bolger continued. “But tomorrow’s 15 k skate will be a hard effort, but a fun fast course I’m looking forward to having a good race, but I’ll be putting a little more focus into the next skate sprint in Val Müstair!”

“My skis were great today!” Harvey wrote in an email after the sprint. “I was actually feeling quite good in the warm up and in the race. I just think that a 2:16 sprint is a bit too short for me. The conditions made for a quick and fairly easy prologue, I think 2 years ago in was more around 2:45 so to shave 30 sec of a sprint course is pretty impressive.”
“I would have liked to get in the heats and maybe put some time on some of the contenders for the overall but I guess I’ll have to wait for tomorrow to do that!” he added.