Let’s explain. The format was basic, a freestyle sprint. Otherwise, that’s where sprints as we know it ended. The 0.66-kilometer course shot off from the start up a gradual V2-able climb. It then rounded a left-hander where athletes descended what looked like a salted banked turn found in a X-Games terrain park. Down to the course’s bottom zoomed the skiers. Then things turned skyward. The course ascended a mini-Alpe Cermis lasting around one-minute for the men, to the finish atop the climb. The climb was the defining characteristic of the terrain: athletes suffered up a downhill ski slope gaining roughly 60 meters in altitude before the finish line. Calling the final ascent punchy would be an understatement. Grinding. Grueling. Leg-cement-inducing is more appropriate.

Perhaps a sprint sideshow? That could be argued. But hosting an event at the base of the Swedish National Alpine hill with amenities for fans, of which there were plenty, and bountiful options for climbing terrain, we’ll let others debate the merits of hosting a climb-fest sprint. 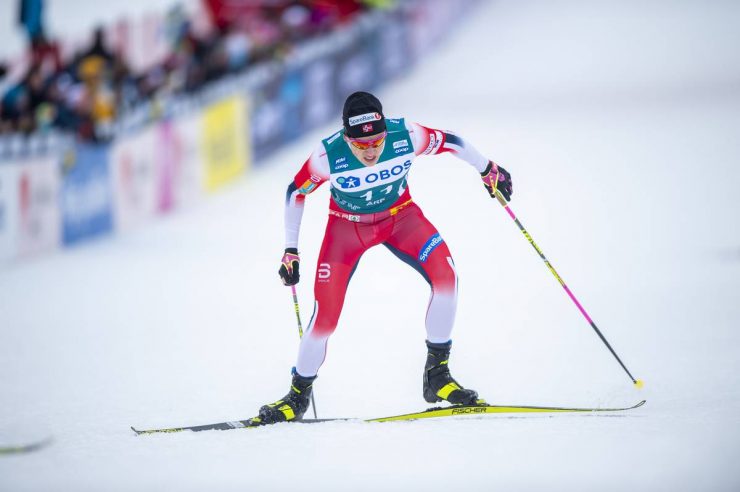 Johannes Høsflot Klæbo of Norway in Åre, Sweden on his way to winning Stage 3 of the Ski Tour 2020. (Photo: NordicFocus)

But some things haven’t changed: Johannes Høsflot Klæbo qualified in first covering the course in 1:49.64. That’s right, a quick and snappy 0.66 k, despite the big vert. Klæbo continues to deal with broken fingers and a thus far lackluster Ski Tour 2020. He placed 31st in Stage 1 and 25th in Stage 2. He came into Stage 3 ranked 25th overall in the Ski Tour, 2:05 behind the leader, Norway’s Stage 2 winner, Pål Golberg.

For his part, Golberg laid down the second-fastest time in qualification, 2.58 seconds back. Alexander Bolshunov of Russia, by all measures the pre-Ski Tour favorite, qualified in 23rd (+8.59). 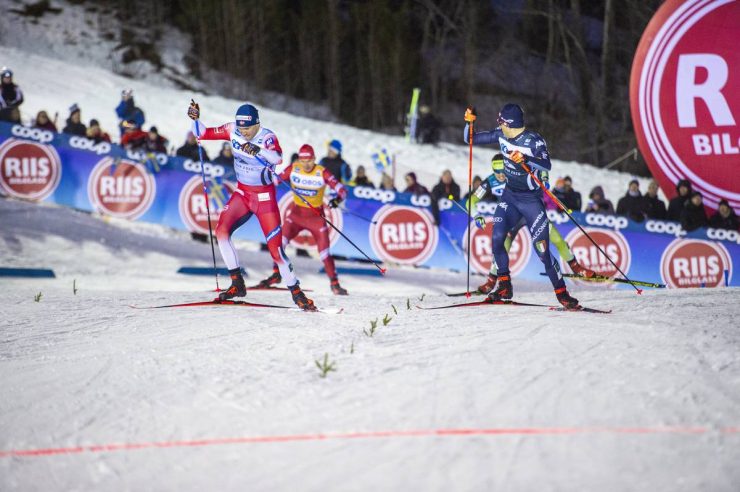 Pål Golberg of Norway and Italy’s Federico Pellegrino into the finish. (Photo: NordicFocus)

In the second semifinal, rounding the corner on the first and notably mild climb, Italy’s Federico Pellegrino took the inside line over the top. In bib 11, Norway’s Simen Hegstad Krüger came through in second, followed closely by Bolshunov who had advanced as a lucky loser.

Krüger took an aggressive line and cut off the advancing Russian. As this transpired, Krüger tumbled as their skis crossed. Bolshunov continued with Krüger going between his legs. Bolshunov now sat in fifth as he crested the hill. Krüger snapped a pole and grabbed a spare just prior to the descent. (He eventually received a yellow card for his cut-off move.)

Golberg won the semi, with Pellegrino in second. Bolshunov never recovered and placed fourth, 1.92 seconds behind Golberg. Bolshunov finished the day in eighth after being eliminated. 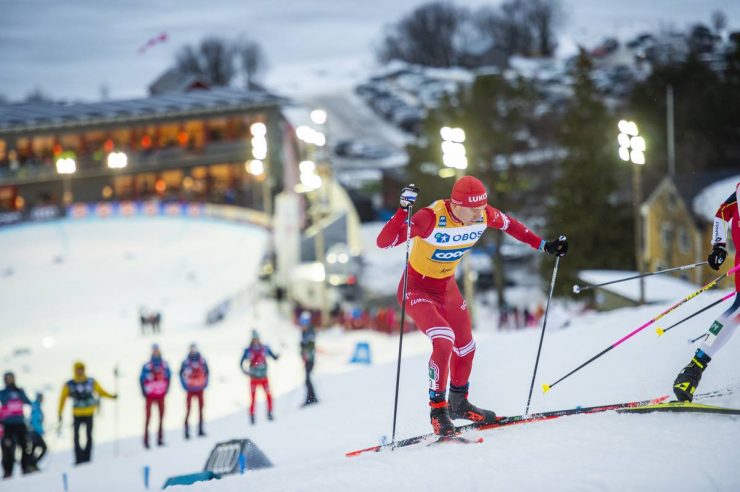 Although 8th on the day, Russia’s Alexander Bolshunov sits second overall in the Ski Tour 2020 after three stages. (Photo: NordicFocus)

Outside of the peculiar course, a stumble here and there, Klæbo and his astounding pull away acceleration in the final was the story. He advanced by winning the first quarterfinal and the first semi. He won that semi by only 0.52 seconds over France’s Jay Renaud. What became evident was that Klæbo was holding back and had not dialed his tactics.

In the final that featured Klæbo, Pellegrino, Renaud, Golberg, Lucas Chanavat of France, and Norway’s Erik Valnes the charade was over.

Chanavat led into the final climb with Pellegrino off to his right, a meter back, with Klæbo shadowing on the other side. Then Pellegrino upped the pace and pulled ahead with Klæbo settling into his draft. Chanavat took charge of the climbing lane to the left. For a moment, Klæbo must have been inhaling extra oxygen, as he fell slightly back.

But as the trio passed under the red sponsor arch, Klæbo shot off. For every single V1 cycle Pellegrino completed, Klæbo threw in two hop-skates. As he rounded to the left atop the climb, Klæbo looked back on a 20-meter gap. “Mamma mia” they must have been saying in Italy. 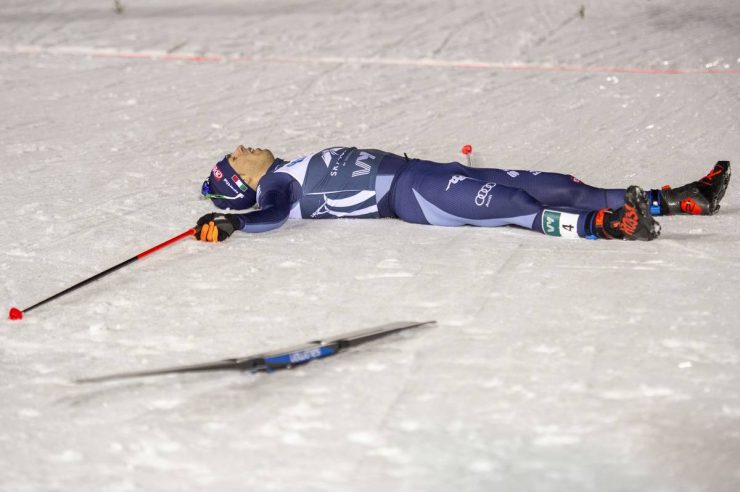 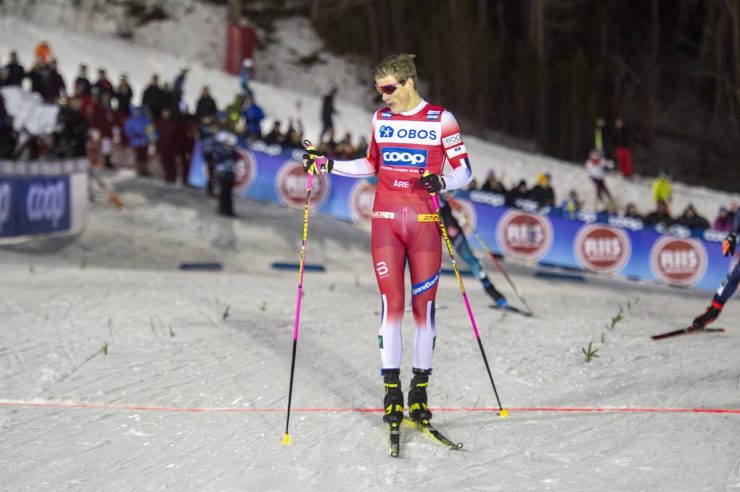 Time to chill at the finish: Johannes Høsflot Klæbo of Norway. (Photo: NordicFocus)

For the U.S. Simi Hamilton was the lone North American who advanced into the heats qualifying in 17th (+7.12). Hamilton skied to third (+2.27)  in the second quarterfinal which was won by Russia’s Denis Spitsov in 2:04.14. The Aspen, Colorado native placed 14th in the final standings. (Below we have included an extended post-race interview with Hamilton. In the interview Hamilton discussed his injuries, and his return to racing World Cup sprints.) 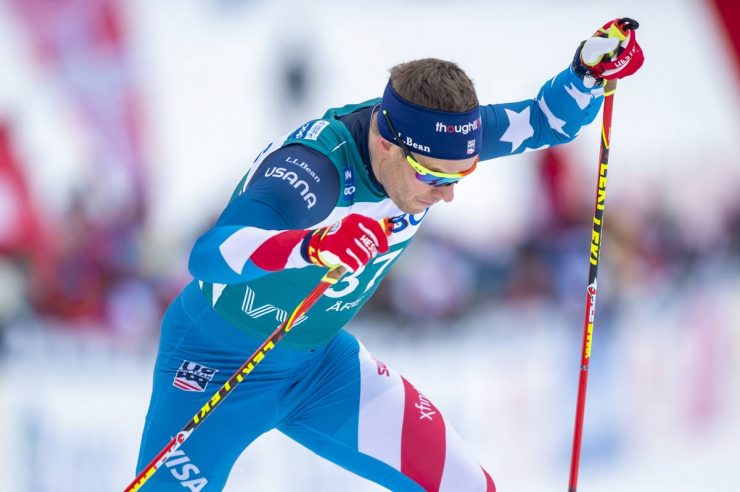 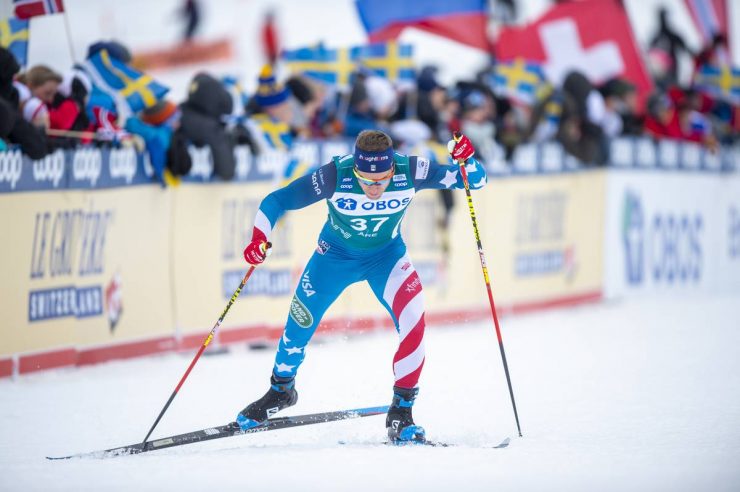 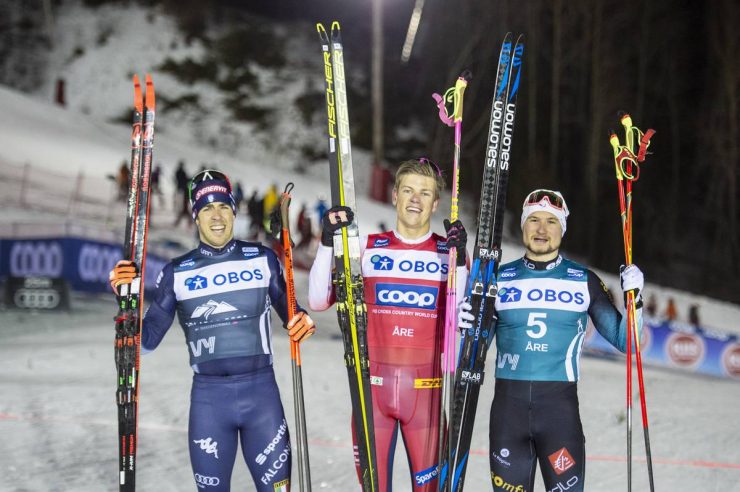