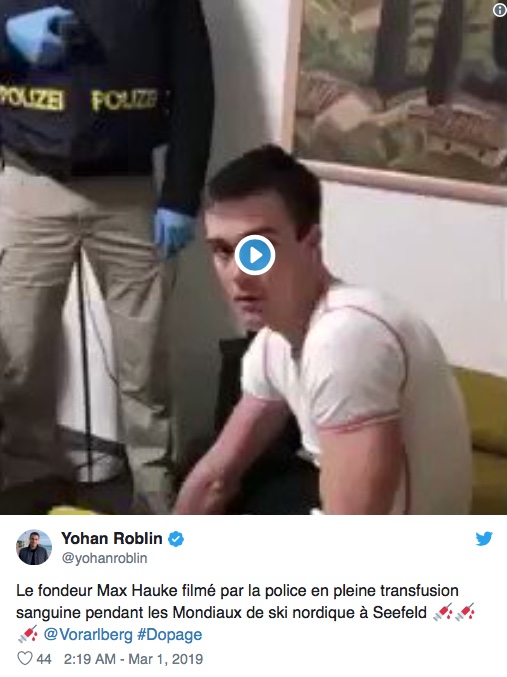 A screenshot from a video posted to Twitter of Austrian cross-country athlete Maz Hauke during his arrest on Wednesday. Hauke can be seen in the video receiving a blood transfusion. (Photo: @yohanroblin twitter screenshot)

Overnight a video was leaked of Austria’s Max Hauke as he was arrested during a police raid conducted earlier this week. Hauke is seen in the video receiving a blood transfusion. The police officer who provided the video to the media is now under investigation by Austrian authorities.

On Wednesday, Hauke was one of five cross-country athletes arrested in Seefeld as part of a widespread anti-doping sting. Along with Hauke, Austrian teammate Dominik Baldauf, Estonians Karle Tammjärve and Andreas Veerpalu, and  Kazakh Alexey Poltoranin were arrested.

The release of the video featuring Hauke prompted Austrian cross-country coach Trond Nystad to resign effective on Sunday after the conclusion of the World Championships. Norwegian tabloid VG first reported the news of Nystad’s departure. The forty-eight-year-old Nystad is Norwegian but has been coaching the Austrian cross country team for several years.

“The two boys have done something completely illegal,” Nystad said according to a translation of the VG article. “When there are people who are kidding with such things, I have no desire to work with the Austrian ski club anymore. It was not difficult. It was a shock. One thing is to hear about things that have happened. Suddenly watching the video of it made me sad. I just got even sadder and upset.”

On Thursday, the morning of the women’s 4 x 5 k relay, Nystad conducted an interview with British Eurosport in which he denied any knowledge of Hauke’s and Baldauf’s doping.