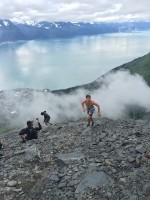 David Norris (APU) leading up the 2016 Mount Marathon Race before the turnaround at the top. He went on to win the race. (Photo: Nat Herz)

Fairbanks resident David Norris, who skis for Alaska Pacific University (APU), won Monday’s Mount Marathon Race outside Seward, Alaska, in record time.  The 5-kilometer race — which takes racers from the shores of Resurrection Bay up 3,022 feet to the summit of Mt. Marathon and back down again, on slopes as steep as 60 degrees — was first held in 1915 and is among the country’s oldest footraces. A crowd estimated at 30,000 people crams into Seward (pop. 2,500) each July 4 to watch a race that has been described as the “Olympics of Alaska.”

On Monday, at the 89th edition of the race, Norris took 22 seconds off that time. Running alone for most of the race, Norris was first to the halfway mark of the ascent, first to the turnaround at Race Point (elevation 3,022′), and first across the finish line (elevation approximately 20′, depending on how high the tide is).  He finished in 41:26.

Jornet tweeted his congratulations to Norris within minutes of the race’s conclusion.  His Twitter feed made it apparent that he had been watching the live feed of the race.

In the days leading up to the race, Norris and his teammate Patterson, both race rookies at Mt. Marathon, were marked by the local mountain running community as strong climbers but unproven downhill runners. There was also a suspicion that they might hold back slightly on the descent, in deference to their professional ski careers and out of a desire to avoid injury.

Speaking on live television soon after the finish, Norris acknowledged that this was his race strategy.

“I had enough of a lead that I knew I could take it easy [on the descent] and not hurt myself,” Norris said in his interview with Anchorage’s KTVA Channel 11.

Describing his descent, in which he lost 3,000 vertical feet in roughly 10 1/2 minutes, Norris recounted sliding down a snowfield for roughly 250 meters near the top: “The snow was totally out of control, the scree was fine,” he said.

Norris admitted that he had not come in expecting to break the record.  “I thought that my down would be so slow,” he said, “that even if I had a good up, it wouldn’t even matter.”

But as things turned out, Norris said, “I felt awesome.”

So was there anything that marred his performance on a day in which Norris set a course record in a century-old footrace?  “I crashed into the willows right in front of the crowd at the bottom,” Norris recalled.  “Other than that it was a perfect race.”

Christy Marvin, a stay-at-home mother of three from Palmer, Alaska, won the women’s race in similarly dominant fashion. Competing in the prime-time afternoon spot for the first time – the men’s and women’s races began alternating their positions this year, after decades’ worth of the men getting the most prestigious last race of the day – Marvin ran away from pre-race favorite Yngvlid Kaspersen, a Salomon-sponsored professional mountain runner who flew over from Norway just for the race, early on and never looked back.

Much like Norris before her, Marvin was first to reach halfway on the uphill, first to the turnaround point, and first to the finish. She collected her second Mt. Marathon victory, and first since 2013, in a personal record time of 51:02. Kaspersen finished over two minutes back in 53:22, followed by Denali Strabel in 53:40, giving Eric and Denali a pair of third-place finishes on the day.

Nordic skiers dominated the podium in the first race of the day, the junior race that goes roughly halfway up the mountain before turning around and returning to downtown Seward. Luke Jager, an APU junior skier from Anchorage who won the U16 10 k skate race at this year’s Junior Nationals, won the boys’ race for the second year in a row, this time in 27:29. He was followed by fellow APU junior skier and Anchorage resident Hamish Wolfe in 28:01. Anchorage’s Trent Fritzel, who skis with Alaska Winter Stars, was third in 28:49.

Both genders race together in the junior race; in 2014, Allie Ostrander beat the boys to finish first overall.  This year, Molly Gellert was first in the girls’ race in 31:55, good for 10th overall. Gellert, of Anchorage, skis with Alaska Winter Stars and has podium finishes at both Junior Nationals and Alaska’s Besh Cup to her name. Second place went to Riana Boonstra of Ninilchik, last year’s junior girls’ champion, in 33:11.  (Riana Boonstra’s father, former Olympic skier Todd Boonstra, is a four-time champion of the men’s race.)  Local Ruby Lindquist, who runs and skis for Seward High School, was third in 34:02.

Norris descends the cliffs section of Mt. Marathon outside Seward, Alaska, on July 4, 2016

Norris approaches the finish line of the Mt. Marathon race in Seward, Alaska, on July 4, 2016.