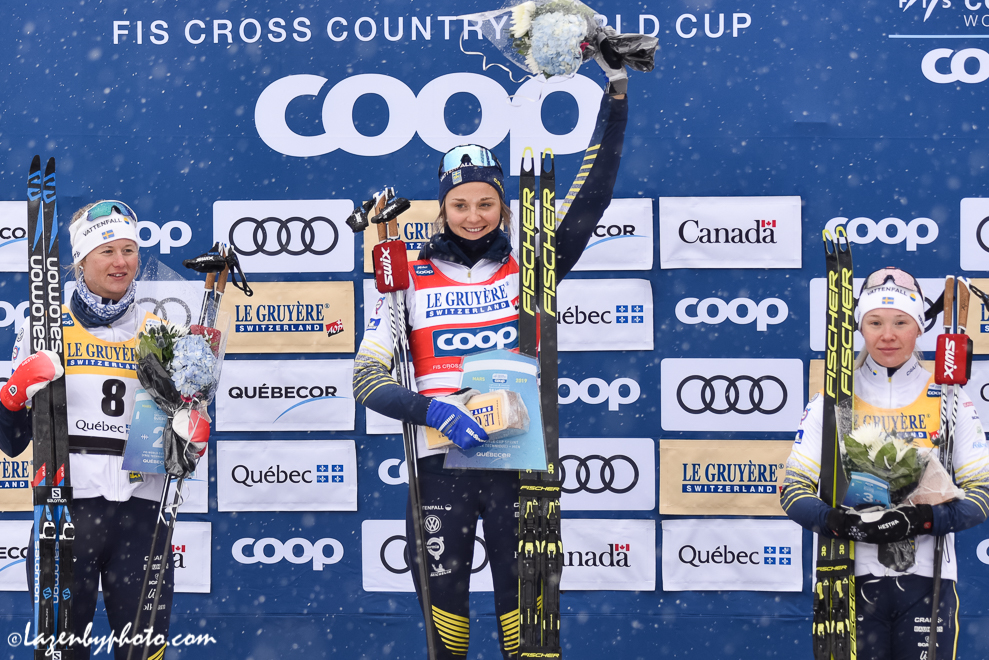 There was wind. Some snow. And certainly 1.6-kilometers of soft leg-sapping snow during Friday’s freestyle sprint in Québec. This was no 2.5 minute in duration hard-pack speed fest. It was a grind. Take off too early and plenty of real estate remained for a decaying fade. Sit back, control the effort, ride the draft a bit on the skier train and the slow snow could, in fact, keep those more tempered athletes in the game.

This much was clear: it was a near four-minute sprint effort that blurred the lines of the sprint-endurance divide.

Sweden’s Stina Nilsson proved her endurance sprint cred with the win. After qualifying in second behind her teammate Jonna Sundling, Nilsson won her quarterfinal, her semi, and the final for her 18th career World Cup sprint victory. With the win, Nilsson could prep to fly the sprint crystal globe back to Sweden. 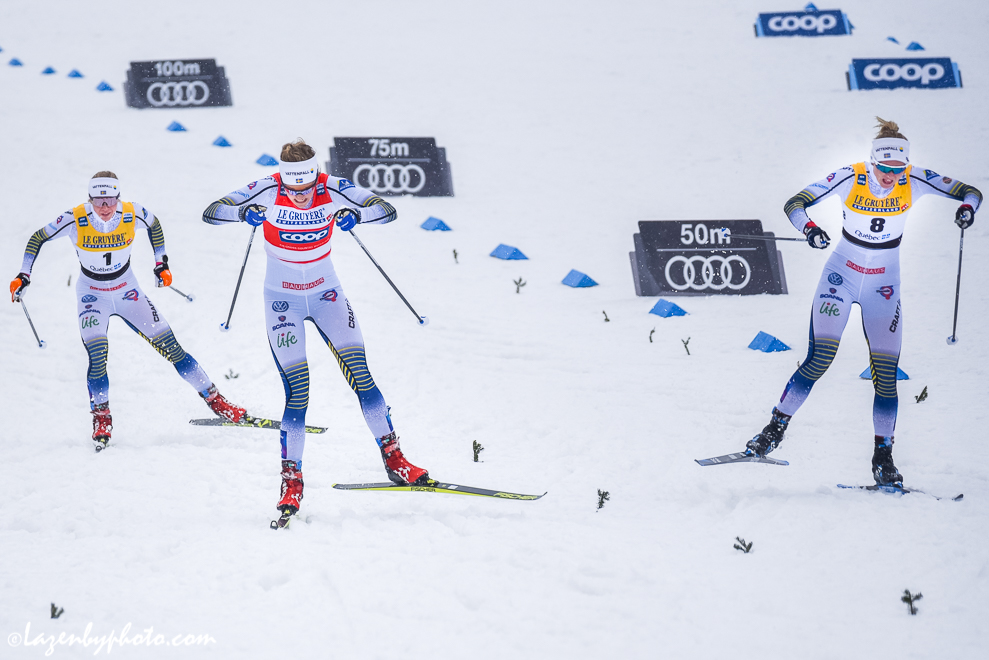 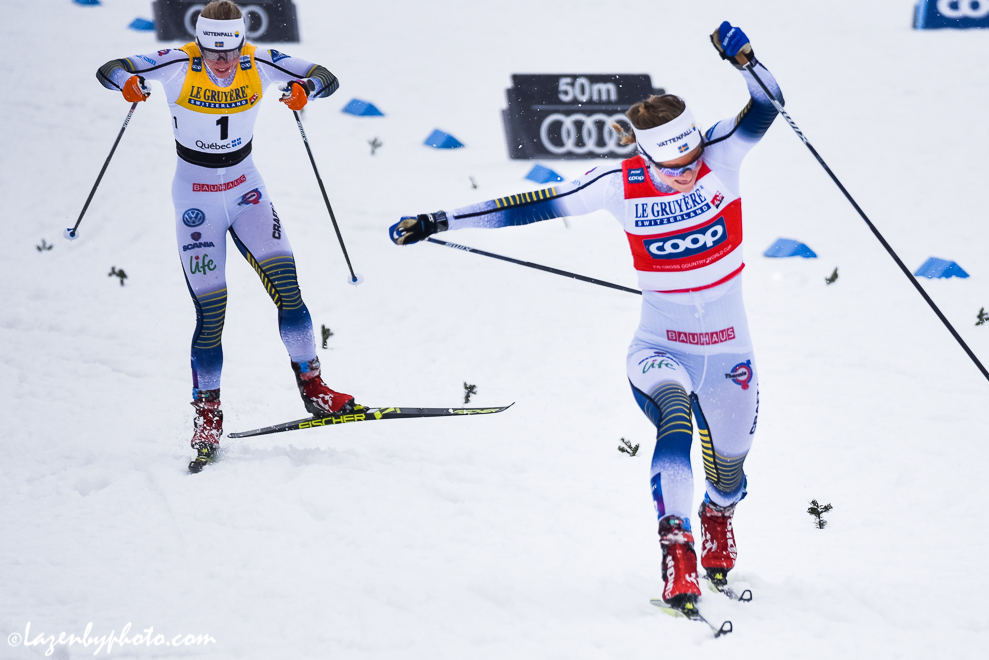 Nilsson came to Québec with a 33 point lead on Norway’s Maiken Caspersen Falla for the sprint cup. The math does not lie. Nilsson earned 50 points for the win, whereas Falla earned 40 points after placing fourth overall. As a result, Falla placed second in the sprint cup standings with a deficit of 43 points.

According to the International Ski Federation (FIS), Nilsson’s crystal globe win is a first for a female cross-country skier from Sweden. This excludes the globe for U23 standings on the World Cup.)

During Friday’s final that featured four Swedes including Nilsson, Sundling, Maja Dahlqvist, and Frida Karlsson, as well as Falla and American Sadie Bjornsen, the power in numbers proved true. With Nilsson in first, Dahlqvist placed second, and Sundling third.

1-2-3 the Swedes came into the finish straight. Nilsson and Dahlqvist separated themselves as they sped down the last one hundred meters. The toes did the work across the line as Nilsson and Dahlquist crossed for a photo finish. Nilsson won in 3:44.80 with Dahlqvist 0.01 seconds back.

“The conditions were really hard today,” Nilsson told FIS after the race. “It was hard to find a perfect tactic because the wind was so strong and not so good to be first on the last downhill but in the end, I wanted to go hard in the last uphill because that is my strongest part. So I went for it and I was so glad that it was my toe before Maja’s.” 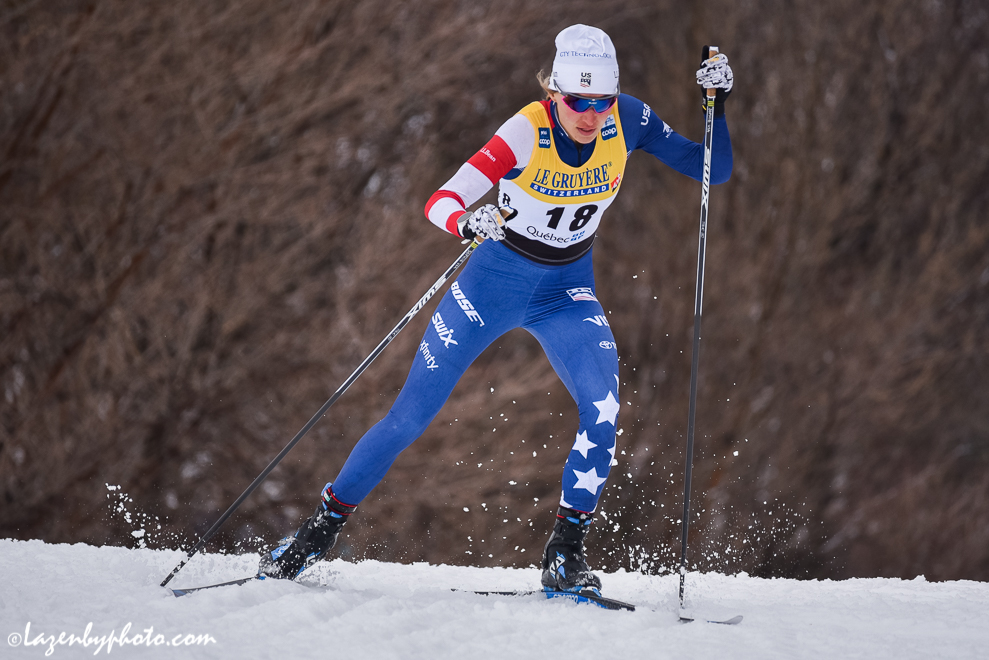 Sophie Caldwell of the U.S. during her sprint qualifier in Quebec. (Photo: John Lazenby/lazenbyphoto.com)

The U.S. women were positioned well on the day. Bjornsen qualified in fourth, Sophie Caldwell in seventh, and Jessie Diggins 15th.

Caldwell moved to the semis after placing second in her heat. In the first semi, Caldwell placed third and did not advance. Yet, is was her twenty-ninth birthday and the cheers were loud for the native Vermonter.

“My parents, my sister, my brother, my cousins, my grandpa, friends, it’s awesome,” Caldwell rattled off when asked who was in Québec to support her. She placed seventh overall and ranked fourth in the final standings for the sprint cup. 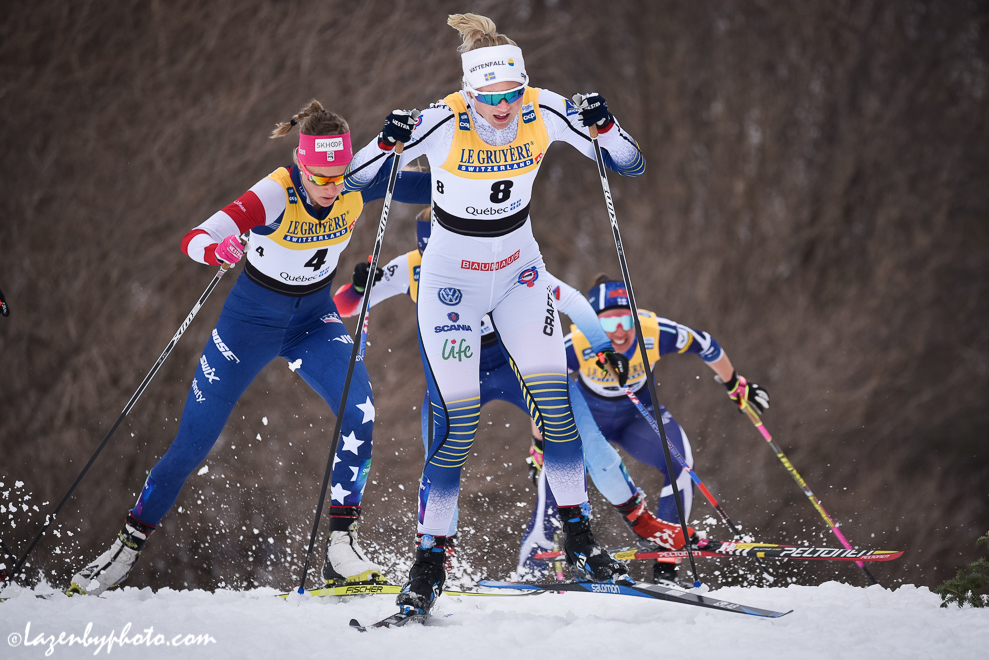 Soft, slow, and somewhat slushy conditions were no deterrent for Bjornsen. “You know, believe it or not, I happen to love these conditions,” Bjornsen said in the mixed zone. “It’s what I train on all summer on the glacier, so I have a lot of practice, but it was very soft.”

Paired up in the Bjornsen-Diggins semi was Sweden’s Charlotte Kalla — a formidable distance skier who last made a World Cup sprint final in 2014. Rounding a tight left-handed corner, Diggins was positioned on the inside when Kalla moved towards the apex and collided with Diggins. Then Bjornsen, only feet behind, became tangled too.

“It looked like Jessie and Kalla collided,” Bjornsen said of the snafu. “But the problem was my skis were stuck underneath them. So I had to just stand there and really hope they got up fast, but they kept sliding on each other and stuff, and I was almost like ‘COME ON,’ and it was just like ‘wait,’ … I’m glad Jessie got up and we both were kind of fighting with each other, it was a huge surge to get back on the group, so it was a miracle I somehow still qualified.”

On a course with slower snow and times that looked epic compared to some shorter and faster sprint courses in Europe, Bjornsen and Diggins pulled off a miraculous chase. After the tangle with Kalla, the two looked way, way … way back. Diggins and Bjornsen charged. Meter by meter they made the catch to the leading trio of Dahlqvist, Falla, and Karlsson. But they were never comfortably locked on. Into the finish, Bjornsen and Diggins went head to head with Bjornsen ending up fourth and Diggins fifth. And with that semi’s speed, Bjornsen became a lucky loser.

In the final, Bjornsen placed sixth to end her day.

“I was definitely feeling the effort from the semi-final, I just barely had anything left, so it was definitely not the final I would have dreamed of, but given what happened in the semis I have to be happy,” Bjornsen explained. “You know, it’s been an interesting season, for the first time I put full emphasis on the World Championships, and those did not go as I dreamed, but no regrets, I’m stoked that I tried that. That being said, it was a bummer to not participate in all the races along the way, and so it’s nice to end and begin on great notes because I definitely had a lot of excitement, and I know I made an improvement this year, which is always important, leading into next year just feeling some encouragement, and also extra excitement for racing in Minneapolis next year.” 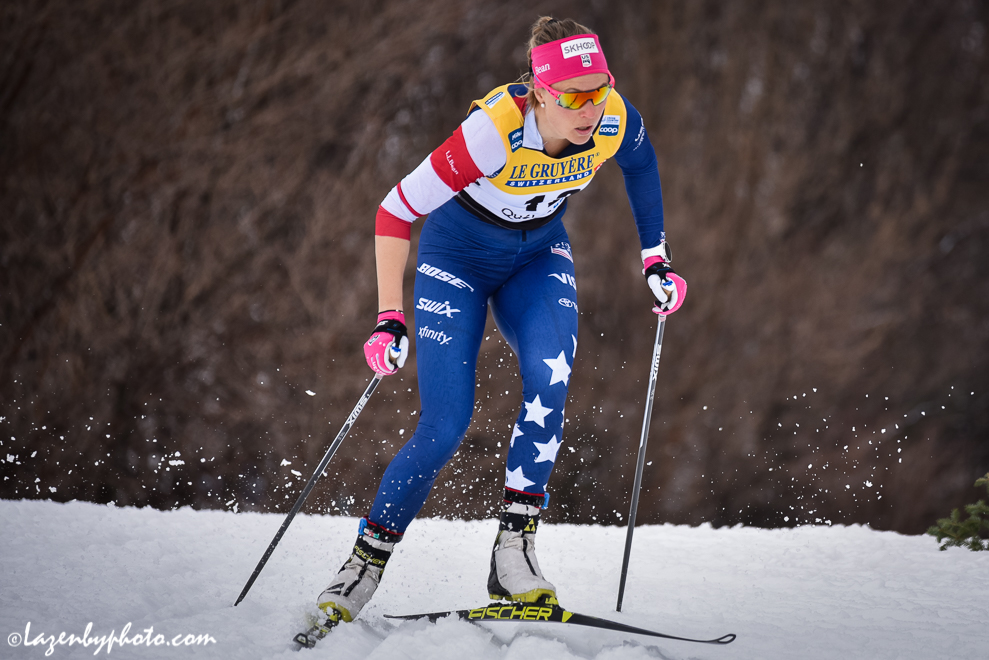 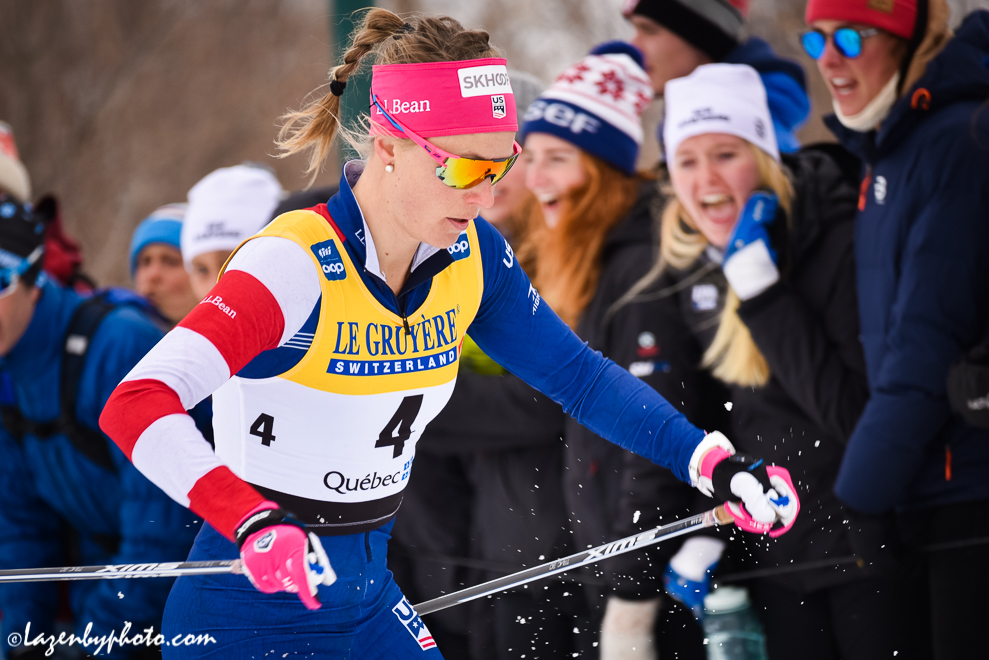 Diggins is known for her drive. That grit was evident as she chased in her semi after the Kalla roadblock.

“I was on the inside so I had nowhere else to go and she just came in a little too tight and yeah, it happened, it’s frustrating,” Diggins said in a phone call. “I had to work really, really hard to get back up and I was working so hard downhill skating through everything. And you fly over from Europe, picking skis you think you’re going to need for the weather and then the weather totally changes, it is what it is.”

Remaining positive, Diggins noted the cacophony of cheers as she began her day.

“I don’t think I have ever, in my life probably, had some many cheers on a qualifier for a sprint,” she said. “That was the most exciting, cool, fun experience. The wall of noise when I started was just inspiring, it was just one of those really cool things that you just gotta appreciate and soak up the atmosphere when you can.”

Despite the snafu on the course and the almost-advancing effort during her chase, Diggins said believes she is in a solid place for the two remaining races. 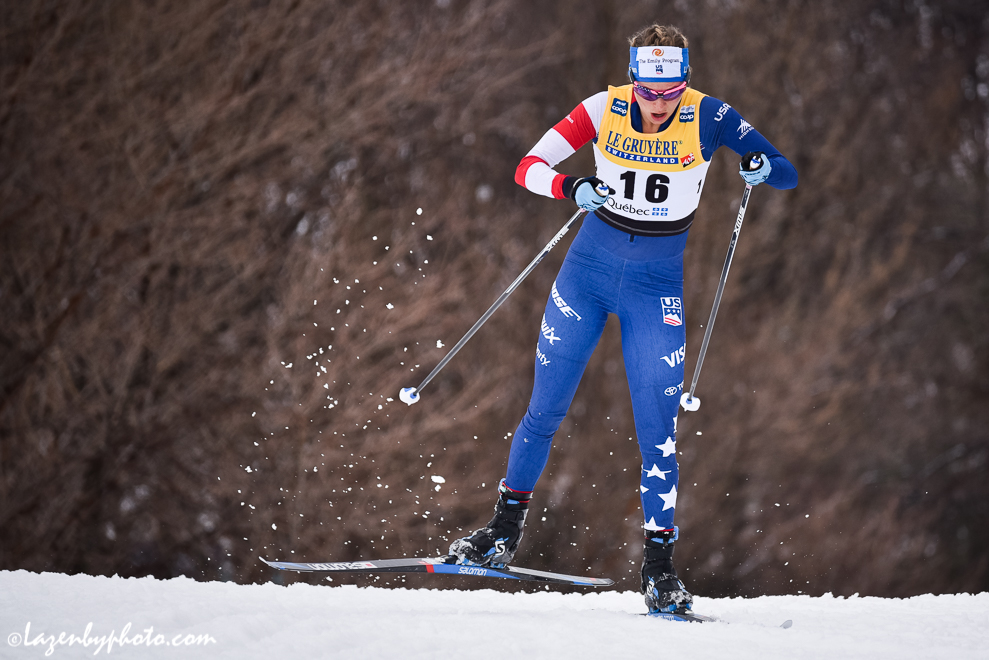 Jessie Diggins of the U.S. during her sprint qualifier in Quebec. (Photo: John Lazenby/lazenbyphoto.com)

“I am proud of how I worked every inch of the course and gave it my best effort,” she said.  “I was actually really happy with how I was skiing and I know I’m in really good shape and I’ve known that from the last couple weekends of racing. So that was a really good confidence booster. Today it was definitely frustrating to have that mishap happen because it was kinda like ‘man I can’t catch a break here.’ We caught back up but it burned a couple of matches. I know I’m in good shape and I’m happy, I’m in a good place mentally. So I’m just finishing out the season with my best efforts every day.”

With the sprint races concluded for the season on the World Cup, the U.S. placed three skiers in the top-eight in the sprint rankings. Beyond Caldwell’s fourth overall, Diggins finished seventh in the standings, Bjornsen eighth. 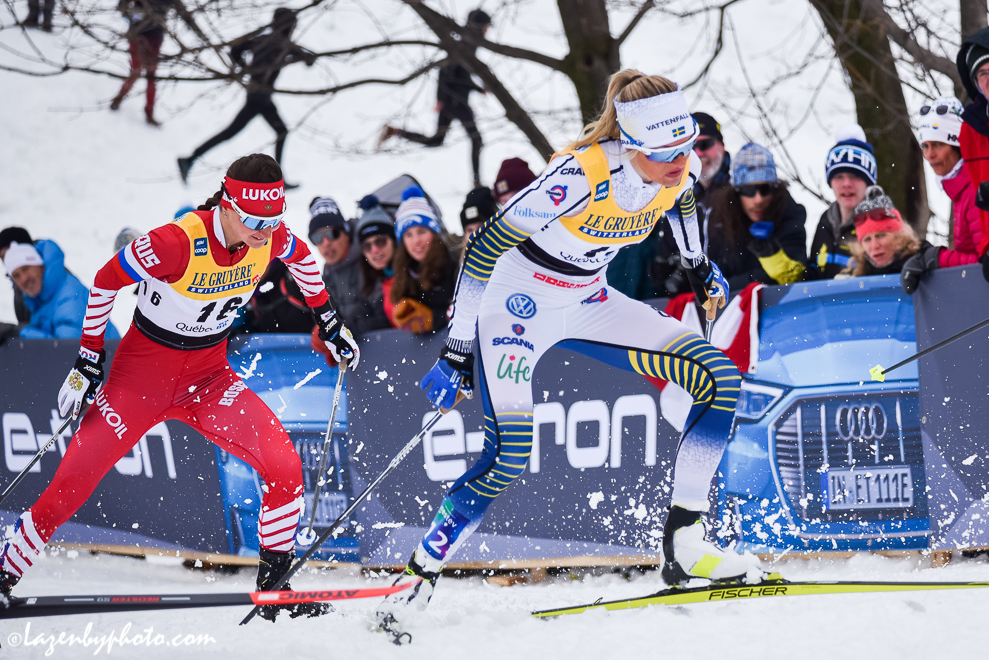 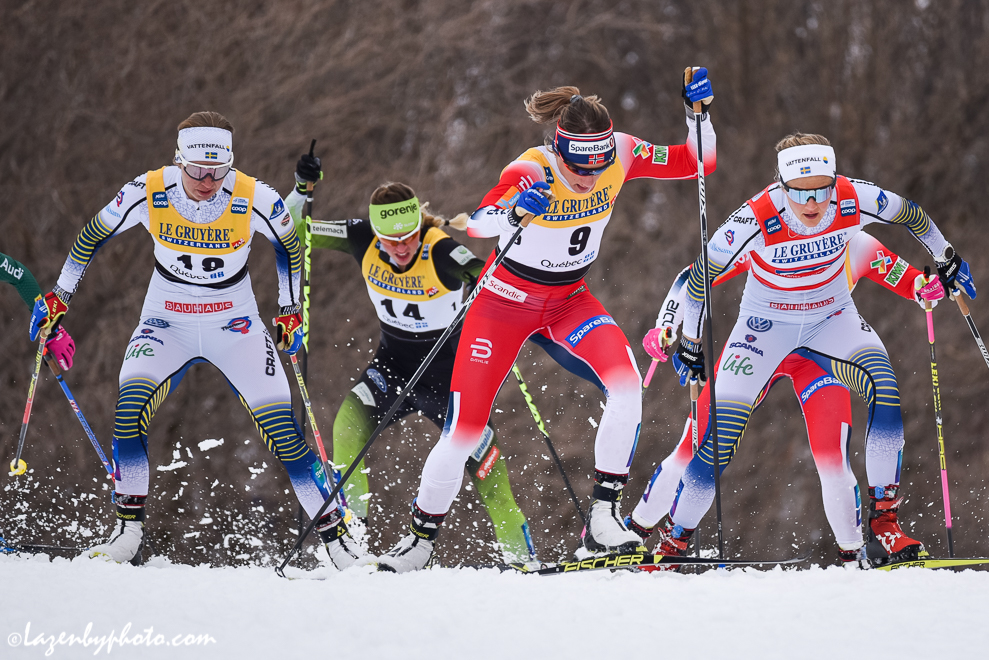 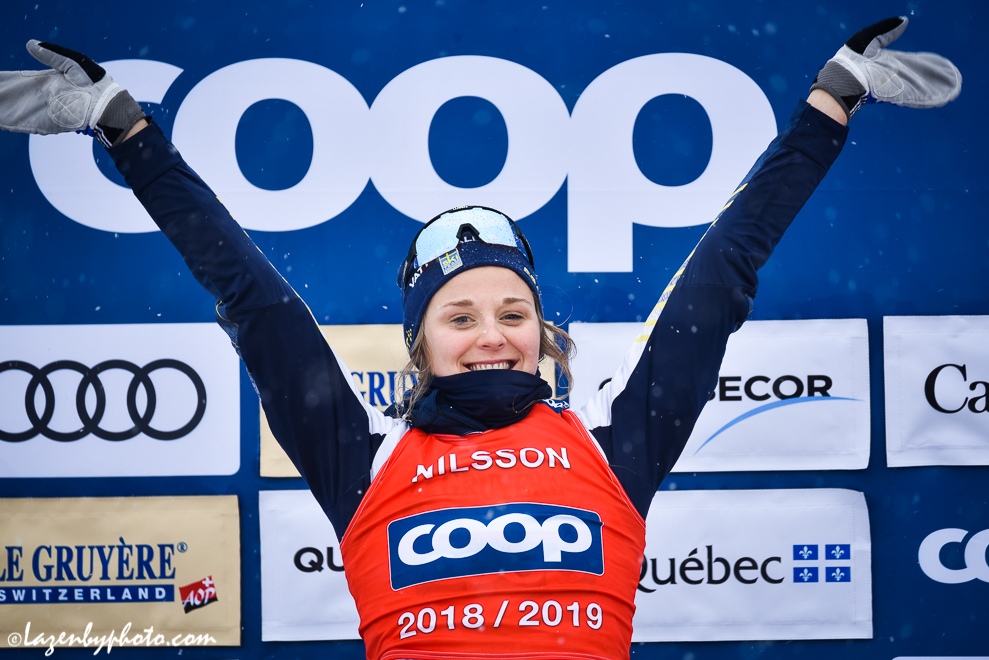 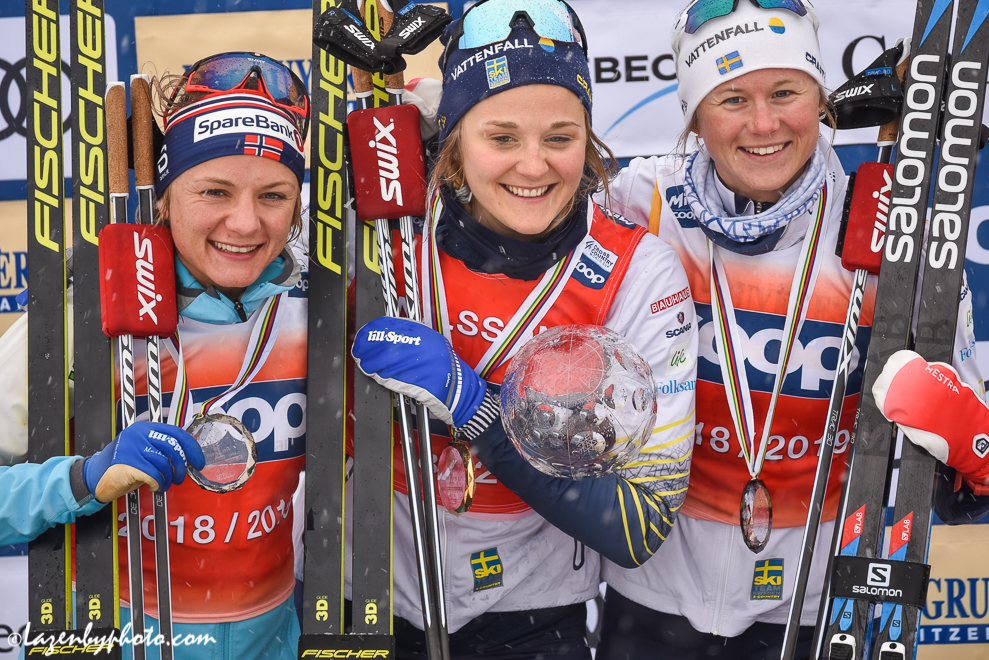 The sprint crystal globe was awarded to Stina Nilsson (centre) at the end of the day. Maiken Caspersen Falla (left) and Maja Dahlqvist were second and third. (Photo: John Lazenby) 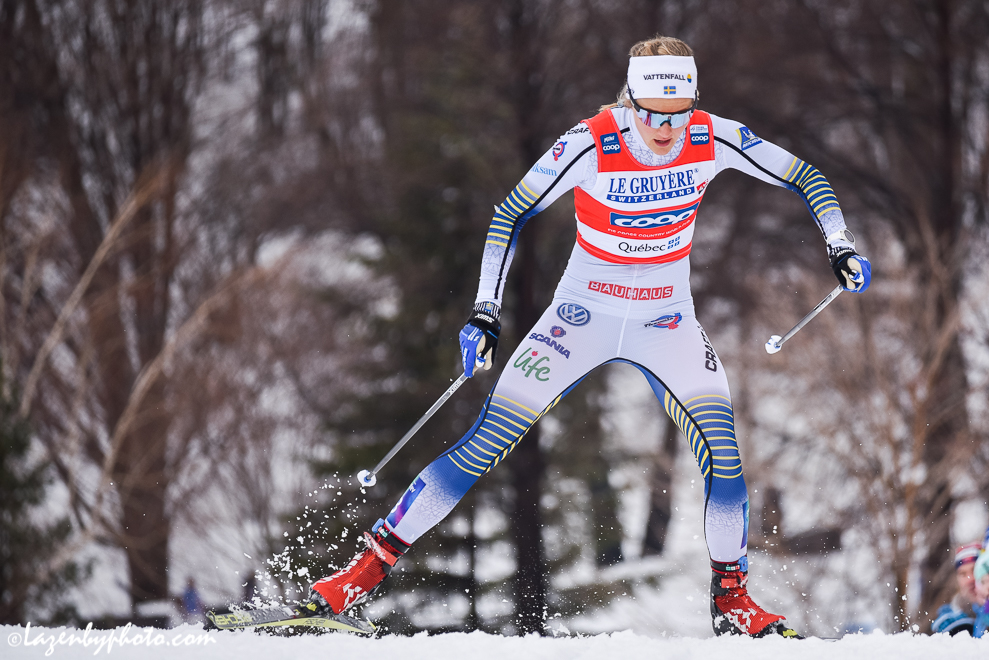 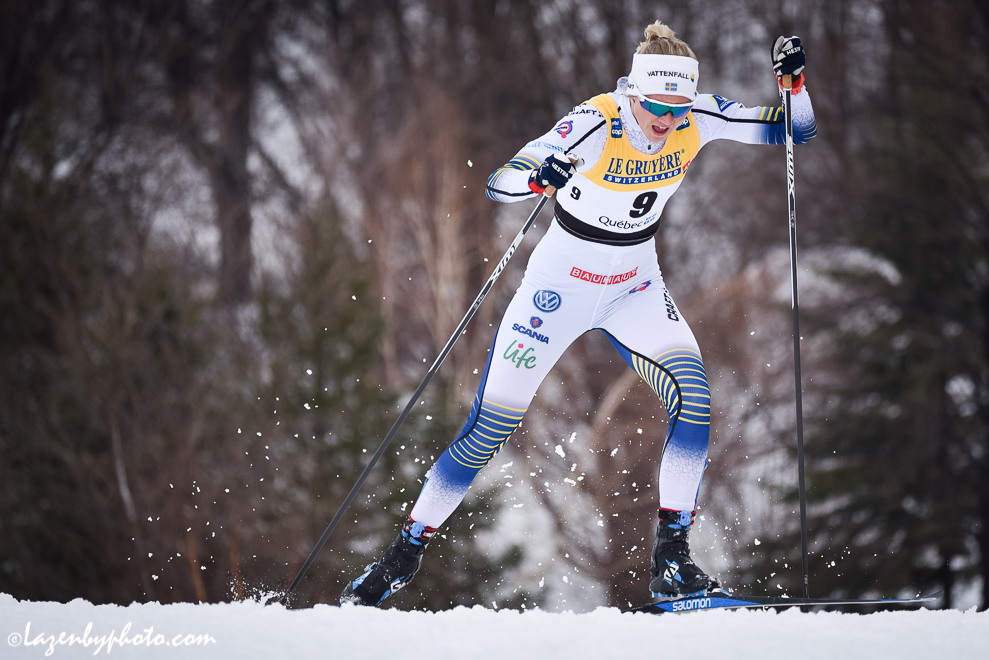