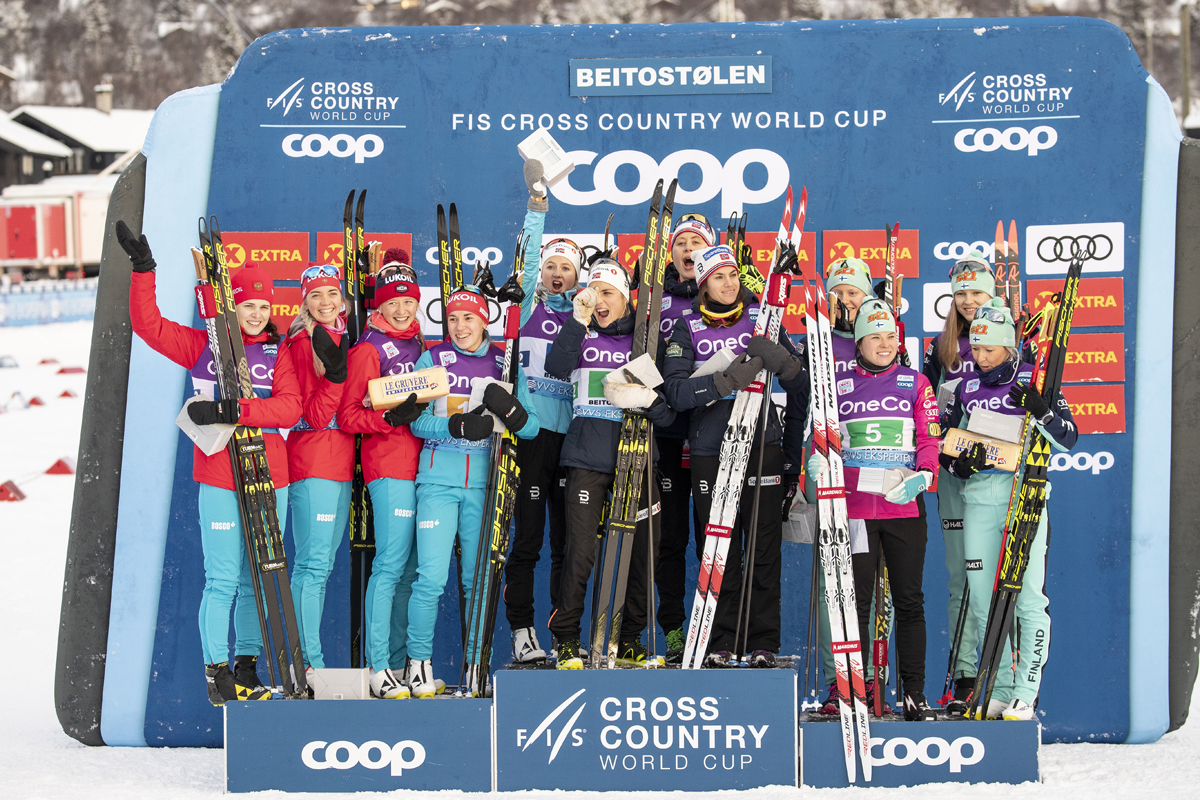 For Norway, relays are often tallied not by wins, but how many wins have been missed. Back in 2009, Team Norway watched on as Team Sweden took the top spot of the podium for the women’s 4 x 5-kilometer relay event in Beitostølen, Norway.

In the nine years after that second place finish in Beitostølen, the Norwegian women’s team has missed winning the World Cup relay–excluding team sprints–only one other time (FIS reports that as having been in 2011, when Italy won the Rybinsk, Russia 4 x 5 k).

This December marks the first time Beitostølen has hosted a World Cup race since the team, back then comprised of Vibeke Skofterud, Therese Johaug, Kristin Strørmer Steira, and Marit Bjørgen, placed second in 2009. Though the goal of top relay performances has not changed, changes within Norway’s team itself are palpable.

Skofterud passed away this summer after a jet skiing accident. Strørmer Steira, married to Canadian Devon Kershaw, retired in 2015. Bjørgen announced her retirement last spring. Johaug served an 18-month ban from ski racing and came back to competitions this year. She is the only name to return to the relay team and Beitostølen since the city last hosted World Cup competitions nine years ago.

Sunday’s win marks if nothing else, Norway’s reclaiming of what they see as theirs.

“It’s really nice to have a race in Beitostølen we have a lot of good memories here – all of us,” Johaug said during a FIS post-race interview. “We all did a really good job today and its beautiful to ski with these ladies.” 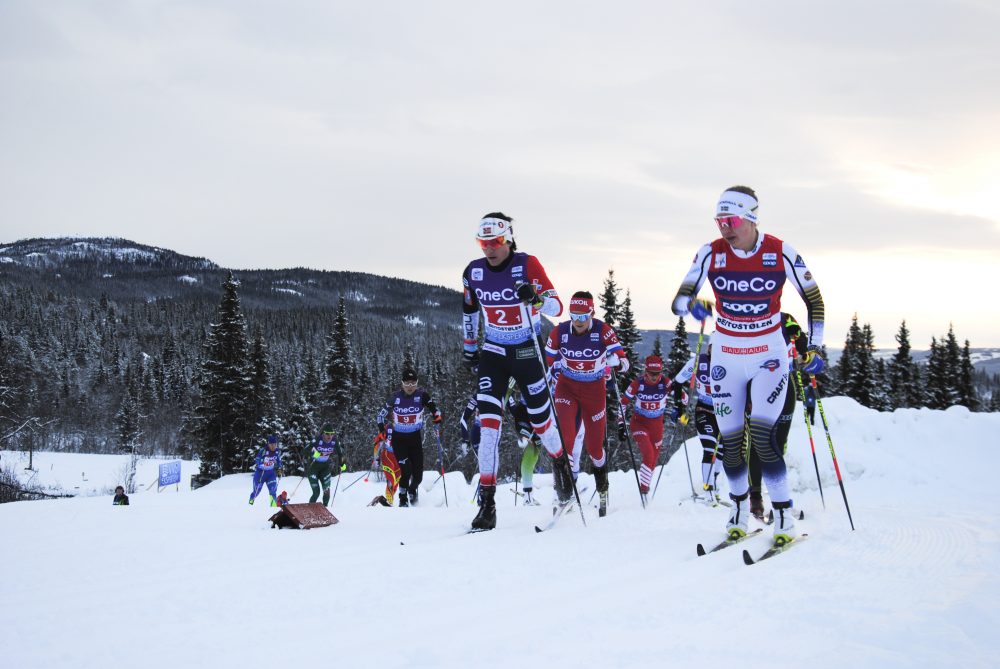 Taking out the Norwegian’s first classic leg was Heidi Weng. Weng hung tightly to the front group until around 3.5 k, when Sadie Bjornsen of the U.S. Ski Team and Russia’s Team I, leg one skier, Yulia Belorukova, began to push the pace.

By the time the women came through for the first exchange, Belorukova and Bjornsen had put a 7.3 second gap on Weng and a 13 second gap on the chasing teams’ skiers, Lidia Durkina of Russia II and Anna Svendsen of Norway II.

“At the beginning, when I was leading, I felt like it was pretty clear that those girls were going to stay in a mass behind me,” Bjornsen told FasterSkier during an in-person interview after the race. “So I tried to stay near the front…then [I said] ‘I’m going on attack mode on the second-half because maybe I can break some people then,’ and it worked out.

“It was a little frustrating to have some people stick in there that I wanted to break harder,” Bjornsen added. “But it was nice to have Belorukova to work back and forth with to push all the way to the end.” 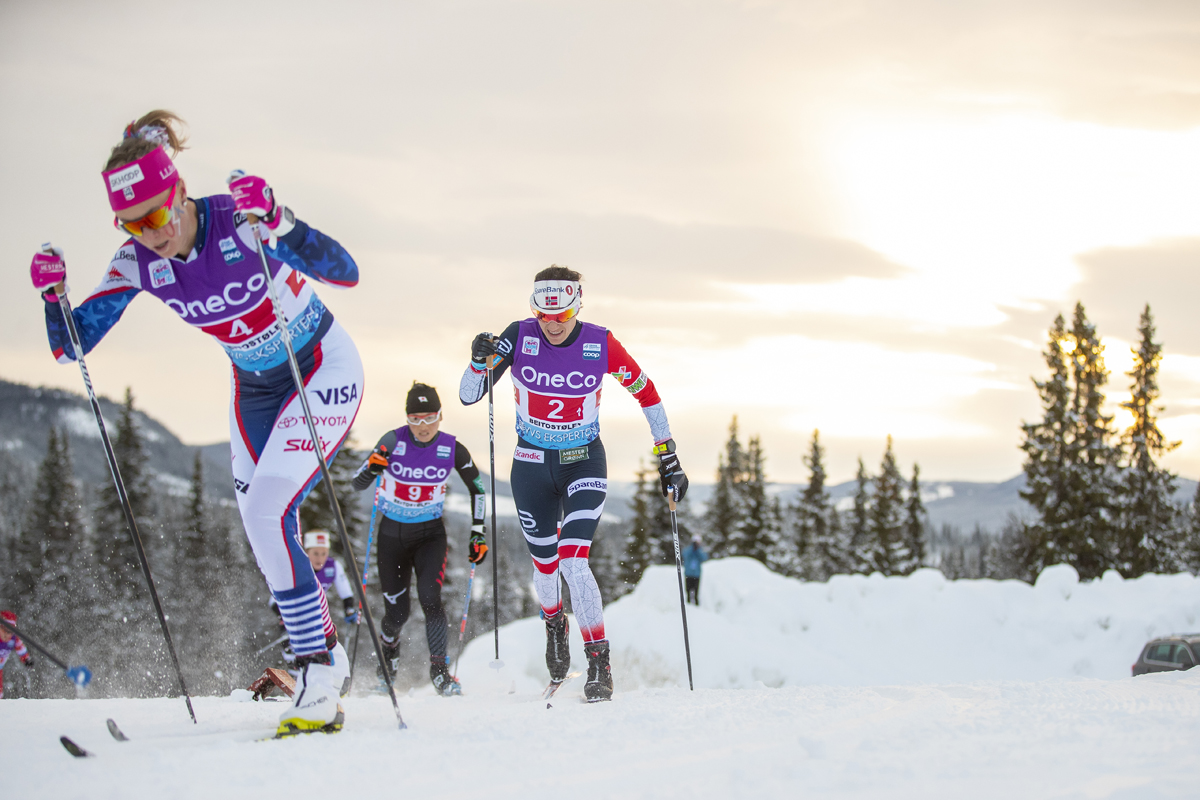 At the start of the second classic leg, it was Natalia Nepryaeva skiing for Russia I in the lead, followed by Rosie Brennan of the U.S. less than a second back positioned in second. The second classic skier for Norway I, Johaug, was positioned 8.2 seconds back through the first kilometer. Chasing down the top-three, 20 seconds back, was Astrid Uhrenholdt Jacobsen skiing for Norway II in fourth, and Russia II’s skier Anna Zherebyateva in fifth.

Within the next kilometer and a half, Johaug had closed the 8 second gap separating her from the U.S. and Russia I. By the race’s 8.5 k mark, Johaug was up on Brennan by almost 14-seconds and looking ready to bury Nepryaeva, who lagged just 1.4 seconds behind the Norwegian.

As Johaug came into the stadium to tag off to her teammate Ragnhild Haga for the first freestyle leg, she was alone. Nepryaeva skied in 9.4 seconds behind Johaug to hand off to Anastasia Sedova. Along with Johaug, Brennan had also been passed by Russia II’s Zherebyateva, Norway II’s Jacobsen and Finland I’s Krista Pärmäkoski having dropped down to sixth, handing off to Caitlin Patterson 29 seconds back from the race leader. 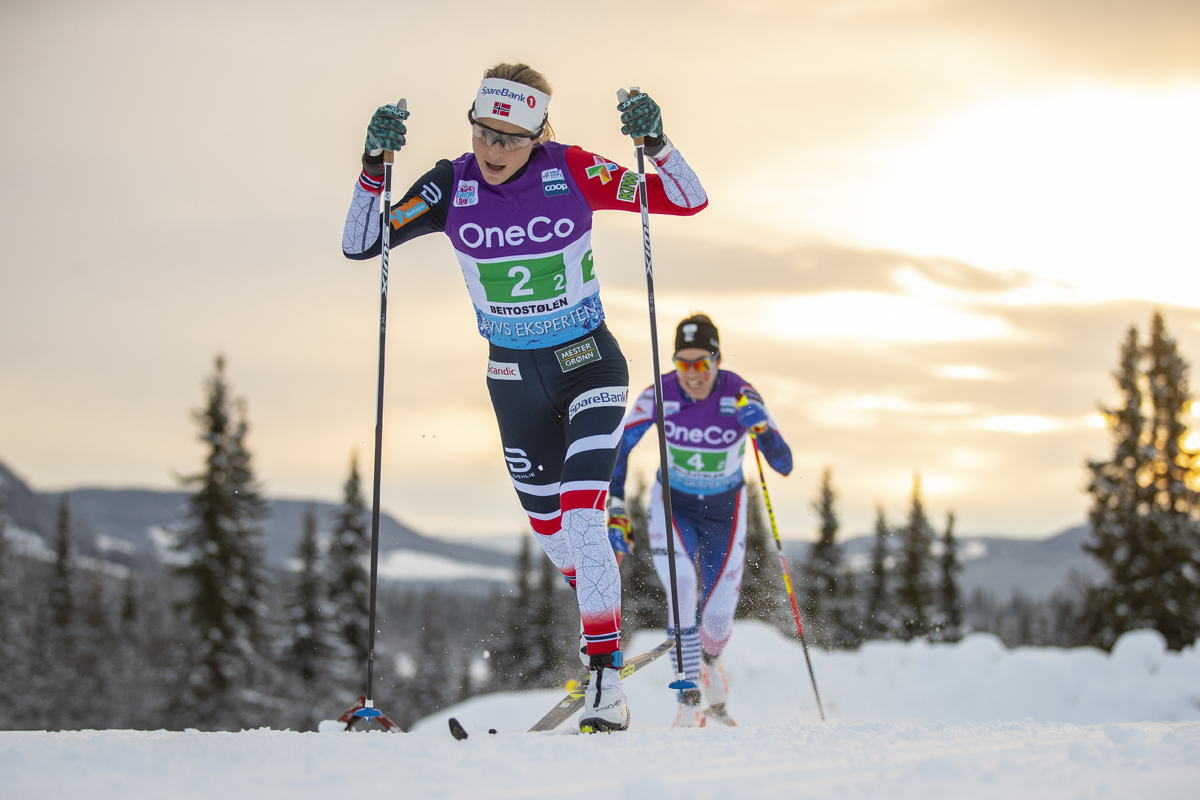 “I’m a little frustrated, I think I have more to give than I did today, I struggled a little bit with my skis, maybe I didn’t have my top form, but it was something to work with and a good starting place, so hopefully I can make some improvements,” Brennan told FasterSkier.

“I mean, I think I skied fairly even, I think it’s just really hard to ski by yourself out there, there was a lot of drafting,” she continued. “Once you’re on your own it’s easy to get swallowed up by the next pack, so hopefully next time I won’t be on my own, I’ll stick with the leaders.”

In the third leg, Haga held onto the lead by a 15 second margin for most of the 5 k. By the time she came through for the final exchange, Haga had 11.6 seconds on her closest challenger, Sedova. Thanks to a hard push from Finland’s Pärmäkoski in the second leg, the Finish Team I’s third skier, Ritta-Liisa Roponen came through the final exchange in third, 0.6 seconds behind Sedova and 12.2 seconds away from Haga.

Patterson had maintained the sixth position, handing off to the U.S.’s anchor leg, Jessie Diggins 53.9 seconds back from the race leader, Norway I.

“This is the first time ever that I’ve been on the relay; I’ve been on a few little team sprints here and there, so this is pretty sweet,” Patterson told FasterSkier. “In my own performance, I can see a lot of potential for improvement…I could see so many people up in front of me, but just didn’t quite have the legs to chase them down, so I see a lot of potential for improvement and you never know on a different day, so I hope I’ll get another chance.” 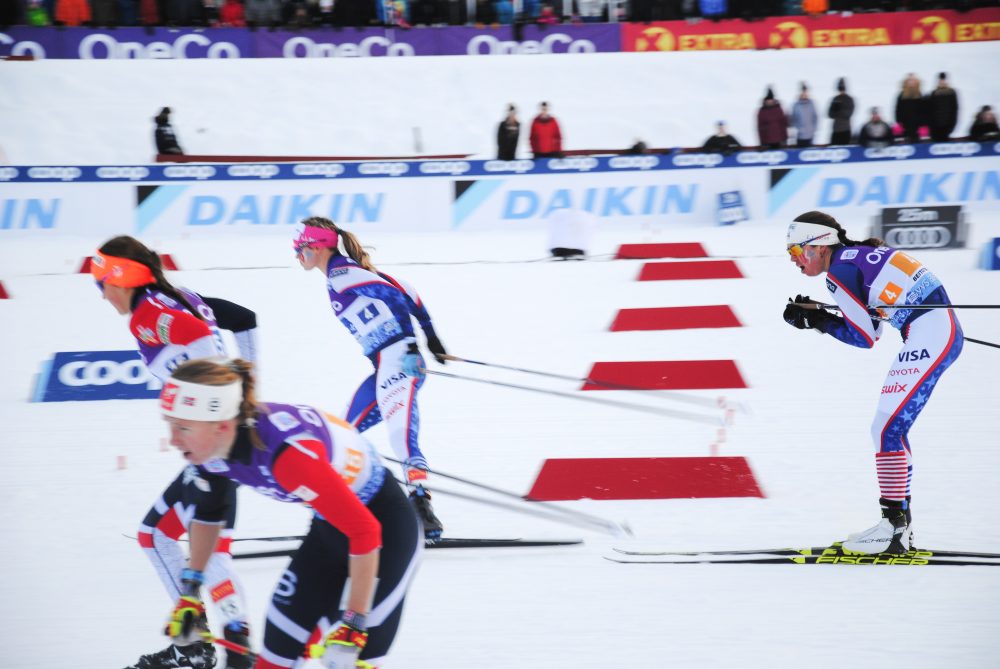 Taking out the final leg for Norway I, Ingvild Flugstad Østberg held off any challengers and continued to pad the team’s gap on the field. She crossed first for the win in a time of 57:23.6.

Though it seemed as if Russia I were on their way to a podium finish on Sunday, a fall from their anchor Anna Nechaevskaya in the course’s last turn placed them off the podium in fourth (+40.9). Russia Team II’s anchor skier, Elena Soboleva, passed her fellow compatriot to claim second place, 37.3 seconds behind Norway I.

The third and final podium position went to Finland I, with Eveliina Piippo closing out the final leg and finishing 37.8 seconds behind the race winners.

The U.S. placed fifth (+48.0) with Diggins serving as the team anchor.

“It was interesting [be]cause I went out full on sprinting trying to shut down a gap,” Diggins said.

However, Diggins indicated that due to the flat course and the skiers she was positioned with, Sweden’s Ida Ingemarsdotter and Norway II’s Tiril Udnes Weng, she decided to change her strategy.

“So I was charging, but then I realized I wasn’t going to be able to drop the girls I was with…so then, about a third of the way through I just totally changed tactics and went to the back and was drafting, trying to conserve energy, build up my plan for the sprint [to the finish].

“Rounding the corner and seeing Russia [I’s Nechaevskaya] right there, I was like ‘dang it, I wish I had kept pushing super hard,’ I had no idea how close we were going to be. But at the moment I made the best tactical choice I could, which was to beat the group I was with,” Diggins said. “I think it was a really good day and it’s always a good chance to practice those practical decisions and making the right move at the right time.” 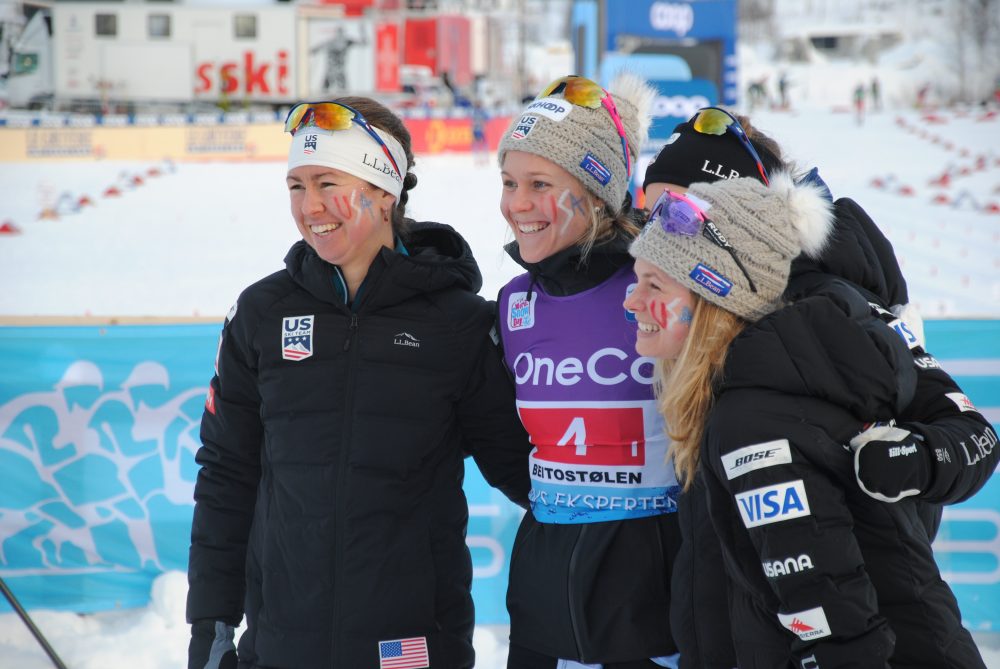 A second U.S. relay team of Sophie Caldwell (USST), Ida Sargent (USST), Kelsey Phinney (SMS T2), and Kaitlynn Miller (CGRP) did not start, as Caldwell is working through “a resurgence of symptoms from the end of her cold.”

“We were very close today on the women’s side,” U.S. Ski Team World Cup coach, Matt Whitcomb wrote in an email to media outlets. “The goal is always to podium. Sadie knew it would be tough to break the lead pack, but her mission was to turn the screws hard. She has a lot of confidence in her fitness right now, and her pace took Sweden out of the podium hunt.”

Sweden ended the day in sixth, 50.0 seconds back from Norway I.

“Rosie’s leg was particularly stacked today, and she did a good job staying as close to the podium as possible on a course with a profile that’s a bit flat for her,” Whitcomb continued. “Today was Caitlin’s first start in a World Cup relay, and she’s an athlete we’ve been wanting to see get some relay experience. While her time was 8th on her leg, not yet good enough for a podium team, she demonstrated that she is close. I’m happy we selected her for the third leg today.

“Jessie was put in a position she thrives in today. Regardless of place, her leg was an invaluable experience to sharpen her relay game,” he added of Diggins’ performance on Sunday. “She was both aggressive and tactical, and had she been only aggressive, we would’ve finished 7th. I was very impressed with her ability to adapt her plan mid-race. I’m particularly excited for her sprint in Davos next week.”