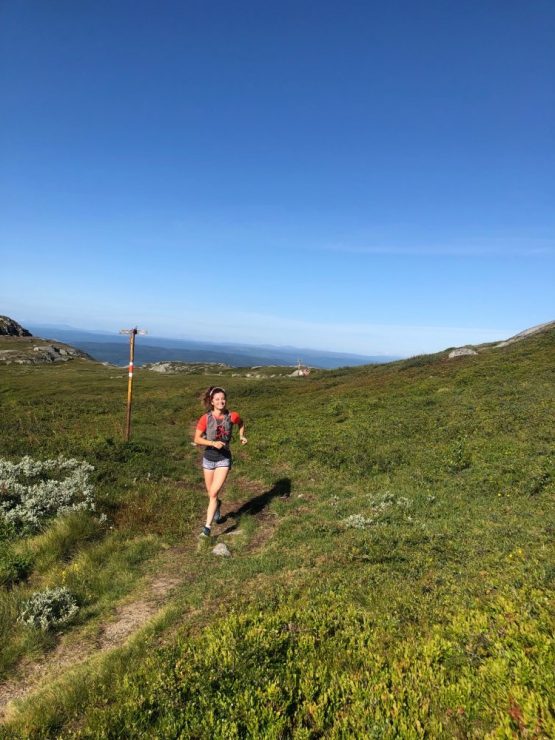 It’s no secret that skiers spend a lot of time running as part of their ski training. And even if it’s not their “real” sport, some of them become quite good at it. Hence Scott Patterson wins Alaska’s Crow Pass Crossing backcountry marathon six times (and counting), Erika Flowers takes the victory in The Rut 50k in Montana, or Therese Johaug runs a 10km on the track in 32:20.86 to win the 10,000m at the Norwegian National Championships for track and field. In her first time on a track in 11 years. While wearing normal running shoes as opposed to track spikes.

In this news roundup, FasterSkier surveys three skiers doing well in their “other” sport.

Kendall Kramer is featured in the “Faces in the Crowd” section of the Oct. 21-28, 2019, issue of Sports Illustrated.

Earlier this month, Kendall Kramer, a senior at West Valley High School in Fairbanks, Alaska, captured her third consecutive Alaska high school cross-country running title. On a perfect day for running, with temperatures in the 40s and yellow leaves on the trees, Kramer led a field of 81 Division I (large schools) athletes off the starting line at Bartlett High School in northeast Anchorage on October 5. She was leading at 1km in, leading by more at 2km, and had no one in sight by the halfway mark. She ultimately took the win by 32 seconds over Sadie Tuckwood of Juneau–Douglas High School.

Kramer’s time, 17:38.3, marked the second-fastest girls time ever on a hilly course used for the Alaska state xc championships since the early 2000s, behind only the 17:06 clocked by Allie Ostrander in 2014. Ostrander went on to win three consecutive NCAA steeplechase titles for Boise State, represented America at the 2019 World Track and Field Championships in Qatar, and now runs professionally for Brooks.

Kramer, 17, spoke eloquently with FasterSkier this summer about her own future, including both career plans and the balance between her two sports of running and skiing. Following her win at Bartlett, she more recently told the Anchorage Daily News, “You can be such an amazing athlete [at cross-country running] just by working out an hour and a half a day, and with just your shoes.”

Three weeks later, Kramer was continuing her winning ways at the Mt. SAC Cross Country Invitational in Walnut, California, which bills itself as “The world’s largest cross country invitational” and has been held annually since 1948. Running in difficult conditions – hot with the threat of wildfire smoke – Kramer covered the 2.93-mile course in 17:36 to destroy a competitive field and take the win in the Girls D–III/IV/V Individual Sweepstakes race by 34 seconds.

Kramer’s West Valley Wolfpack team, which was second to South Anchorage at this year’s Alaska state meet by 2 points, captured the D–I/II team title at Mt. SAC in 2017, DyeStat reported.

Kikkan Randall will be among the roughly 50,000 athletes toeing the starting line on Staten Island Sunday morning for the 2019 New York City Marathon. Among the sizeable field, she will be the rare runner plausibly targeting a sub-3-hour finish for her first marathon. Among the sub-3 finishers who also have an Olympic gold medal, and/or who were only recently finished with chemotherapy this time last year, and/or who were still receiving infusions through July of this year following radiation, Randall presumably stands alone.

As reported by NBC Sports, Randall had planned to compete in last year’s race before her diagnosis of Stage 2 breast cancer, and the accompanying treatment, complicated her plans. She traveled to New York City anyway, and watched former USST Liz Stephen finish the 2018 race in 2:58:40. Randall will be wearing an Aktiv Against Cancer charity bib alongside Stephen and Ida Sargent. Also in the field, Brian Gregg will also be racing, through not affiliated with Aktiv.

Fun to be back at my high school track to hammer out some 800’s. So many great memories. Just missing my teammates and coach @hojohnsoniii !! #EHDB #tbirds #nycmarathontraining #aktivagainstcancer #beanoutsider #polarvantagev

Randall posted about her marathon training on Instagram throughout this summer, including long runs in Anchorage, training runs on the deck of a cruise ship, and 800 repeats at her ancestral training grounds of the high school track at East Anchorage High School. On October 20, she clocked a 1:23:47 to take the women’s victory in the Okanagan Half-Marathon in Kelowna, British Columbia.

Randall was included in a recent Runner’s World piece, “Celebrities Running the 2019 NYC Marathon.” Randall was the only athlete for whom a recent race time was mentioned, as well as the only celebrity on the list whom this reporter had heard of.

Randall has raised over $10,000 for AKTIV Against Cancer, a group that “works to ensure physical activity will become an integral part of cancer treatment” with which she had been associated even before her diagnosis, through the sale of “It’s Going to be OK” socks from her website.

One last race in my @altrarunning flats before I switch over to @fischernordic and @swixsportus. I’ve been seeking out a fast 5k for a while, and Saturday was just about perfect for it. Thanks @greatbaystewards for a very well put on race. #greatbay5k #zerolimits

The headline pretty much says it all – Saturday morning, Adam Martin took first place in the Great Bay 5k in Stratham, New Hampshire, with a blistering time of 14:34. (The course is described on the race website as “mostly downhill” and “wicked fast.”) Martin, who skis domestically for Craftsbury Green Racing Project, will be starting in two distance races in Period I of the 2019/2020 World Cup season, in Lillehammer and Davos.

Martin has previously run a half-marathon in 1:06:18, which puts him within flirting distance of the 1:04:00 standard required to qualify for the 2020 U.S. Olympic Marathon Trials. In his cross-training sport.