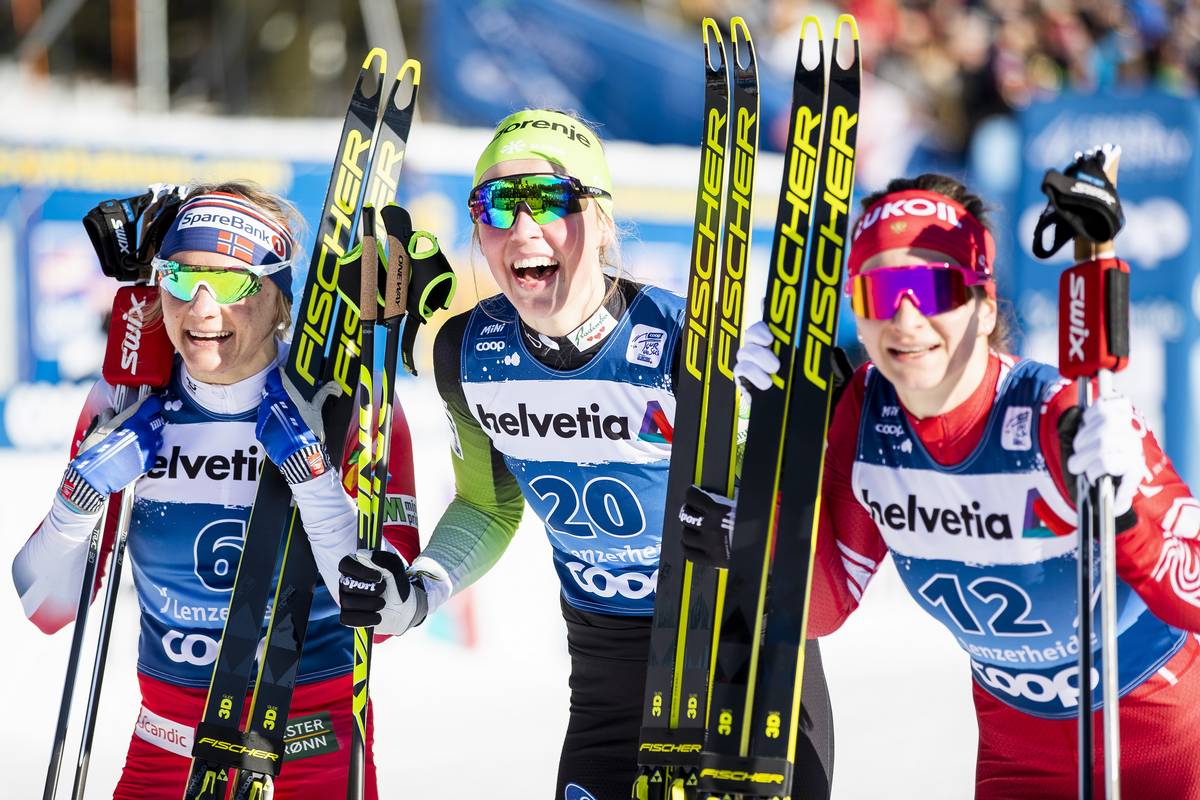 Day two of the Tour de Ski offered the American women the Sisyphean task of earning back time after a miss on ski and wax selection in Stage 1 prevented them from performing to their capability. This was particularly so for Jessie Diggins, a favorite for the overall tour podium who finished the first stage in 29th 1:20 behind Norway’s pace-setting Theresa Johaug. Her teammate Sadie Maubet Bjornsen, also a top all-arounder, was in the same position. Maubet Bjornsen ended Stage 1 in 30th.

The initial run of the TdS in Lenzerheide, Switzerland is about not digging yourself into a time-deficit hole. A podium is nice, a win even better. But the primary objective is to not lose too much time to the leaders. At the start of Stage 2, Diggins and Bjornsen were in that hole.

Backs against the wall and a significant boulder to push ahead of them, the two would need to make it into the final of the 1.5-kilometer freestyle sprint to make significant headway on the tour leaders. A podium finish would be ideal. Since time differentials in sprint racing are small, it would be imperative to earn bonus seconds based on their final standings: 60 seconds for a win sliding down to 42 seconds for sixth.

As Johaug, the overall leader heading into the second stage, was not a podium threat in the sprint event, it was almost-certain that she would lose time on her chasers, increasing the opportunity for the Americans and other overall podium hopefuls.

Knowing the task at hand, Diggins bravely faced the new day with resolve.

“Now I get to focus on doing what I love best: fighting my way back,” she wrote on Instagram. 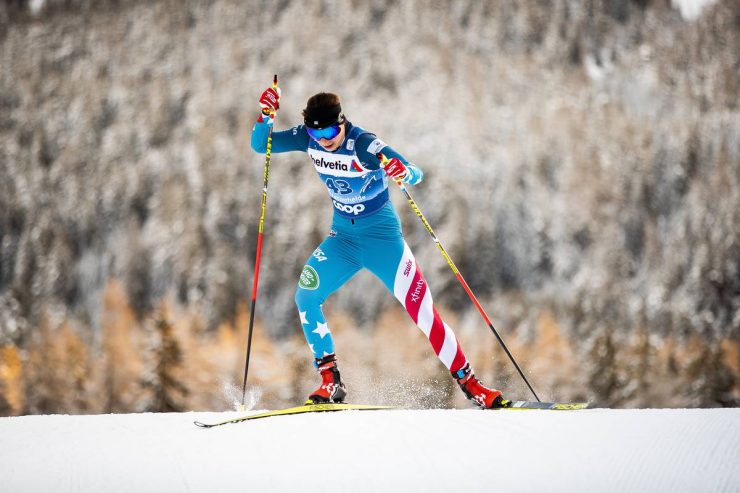 Julia Kern powers to a seventh place result in qualification during Stage 2 of the 2019/2020 Tour de Ski. (Photo: NordicFocus)

And on to the quarters five Americans went. With the momentum and energy of the team, the boulder budged.

Racing in the lightning-fast first heat of the rounds, Diggins fought at the front with leaders Maiken Caspersen Falla (NOR), Anamarija Lampic (SLO), and Anne Kjersti Kalvå (NOR). Last year, Falla was the ranked second overall in the World Cup sprint standings and Lampic was ranked 6th.

Diggins was unafraid to push the pace and spend time at the front. She showed her balance on her feet as she took on the fast descents and icy corners of the course, holding her position. In the final straightaway, Falla and Lampic took off from the front, leaving Kalvå and Diggins fighting for lucky loser positions. With the fate of a fast heat and their stick-to-the front pacing —  their times would have won any other round — Kalvå and Diggins easily advanced to the next round. 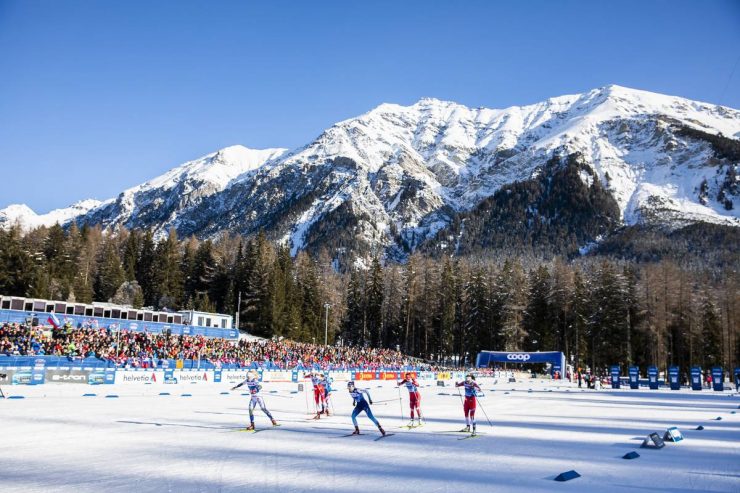 Charging to the finish in the second heat of the quarter-final in Stage 2 of the 2019/2020 Tour de Ski. Jonna Sundling of Sweden holds the lead on the far left with Rosie Brennan tucked into the back left. (Photo: NordicFocus)

The Americans continued to shine in the rounds. In the second heat, Brennan mixed it up with the leaders but lost contact with the pack, finishing fifth in her heat. In the slowest third heat, Caldwell patiently followed the pedestrian pace, then showed her top gears in the final sprint to win the round. Maubet Bjornsen took second in the fourth heat to advance, and Julia Kern took third in a three-way photo finish for the top spot in the final heat.

Three Americans advance to the semis. 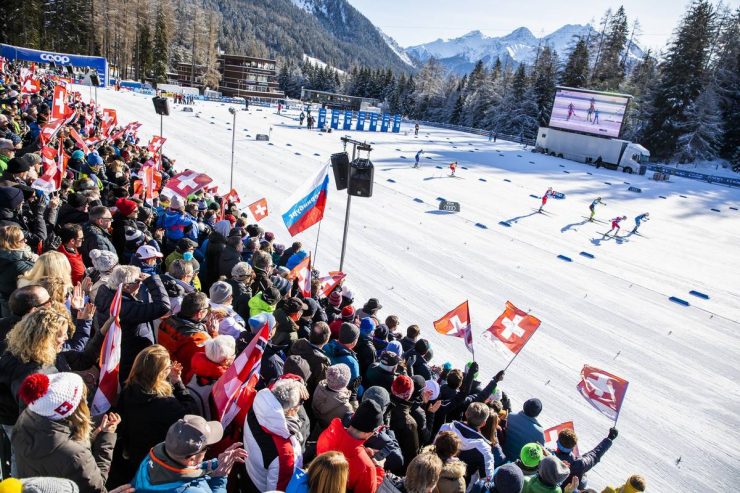 Adrenaline surges through the crowd in spectacular Lenzerheide, Switzerland during Stage 2 of the Tour de Ski. (Photo: NordicFocus)

Again, the first round of the semis was stacked with Falla, Lampic, Diggins, and Caldwell battling with Natalia Nepryaeva of Russia and Jonna Sundling of Sweden. Showing her grit, Diggins won the heat for an automatic spot in the finals, while Caldwell finished fifth. The spread of finishers in the heat was less than one second. Maubet Bjornsen finished second in heat 2, also advancing to the final.

Two Americans in the final. The pieces were coming together. 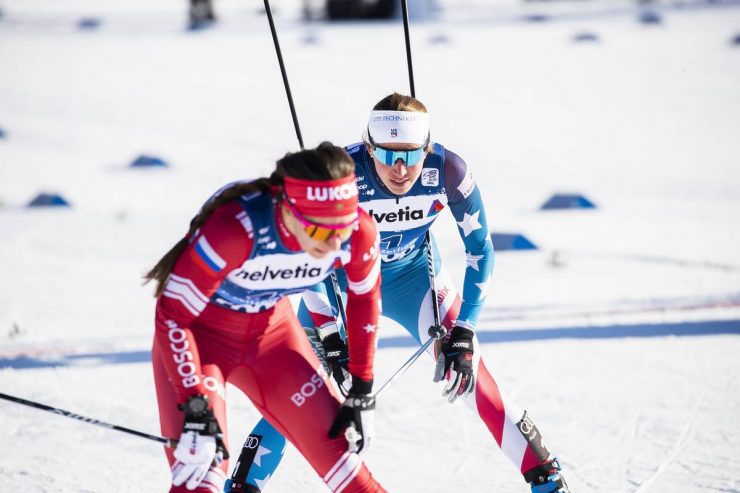 After qualifying in first and winning the first round of the quarters, Sophie Caldwell was knocked out in a close finish in the semifinals of Stage 2 of the Tour de Ski. (Photo: NordicFocus) 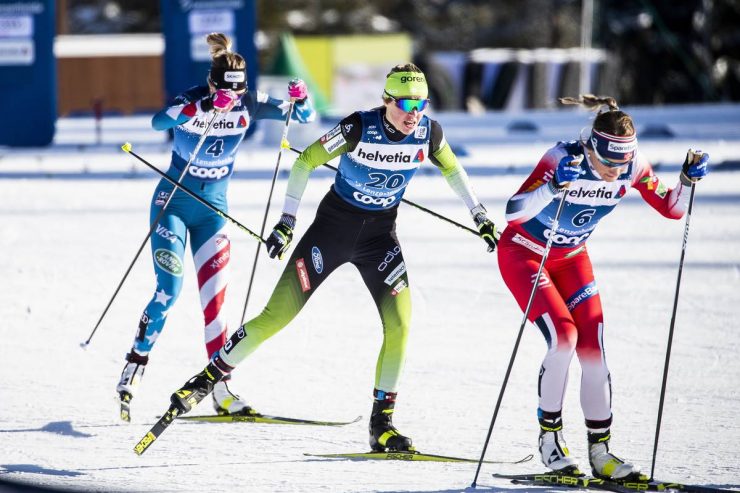 Sadie Maubet Bjornsen marks Maiken Caspersen Falla (NOR) and Anamarija Lampic (SLO) during the final round of the 1.5-kilometer freestyle sprint in Stage 2 of the 2019/2020 Tour de Ski. (Photo: NordicFocus)

Diggins kept herself in contention for a podium spot throughout the final, matching each of her opponents moves, never losing contact and often controlling the pace from the lead. Maubet Bjornsen held strong in the middle of the pack.

Leaving nothing on the course, Diggins jump skated each of the rollers, powering in a no pole skate into a tuck on the descent. She raced with grit over every meter.

Rounding the final curve into the straightaway, she sat in fourth behind Lampic, Falla, and Nepryaeva who had begun to accelerate off the front. Matching their tempo but unable to close the gap, Diggins crossed the line in fourth, doubling over as she gasped for air. 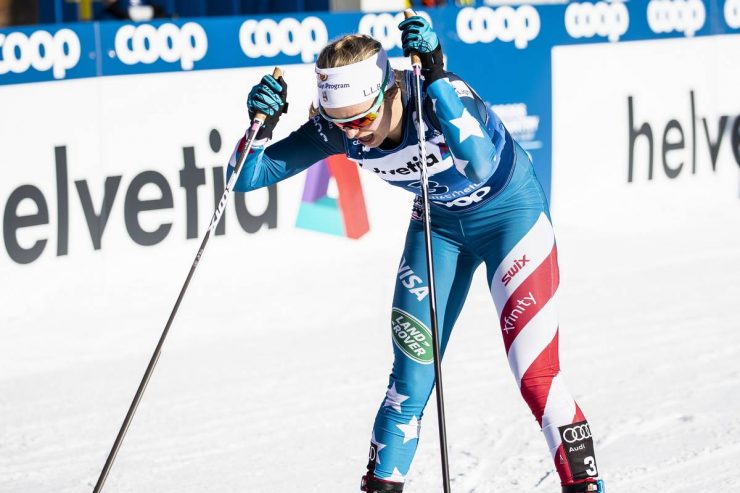 Racing with the fire for which she is known, Jessie Diggins gasps for air after taking 4th in Stage 2 of the 2019/2020 Tour de Ski. (Photo: NordicFocus) 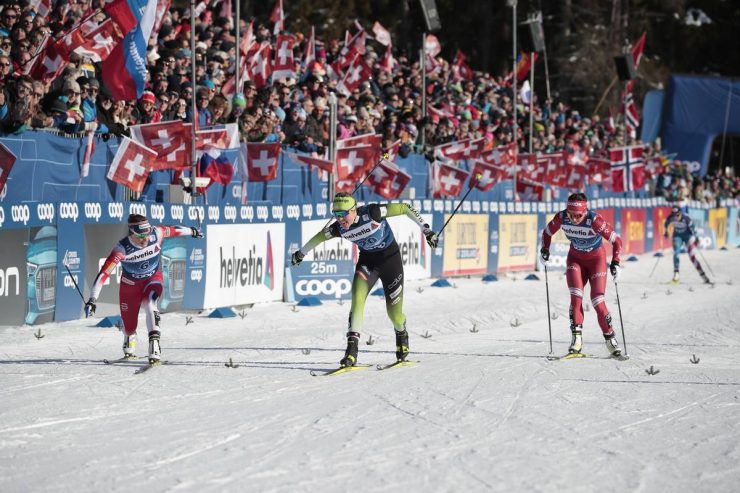 By centimeters, Anamarija Lampic takes the win in Stage 2 of the 2019/2020 Tour de Ski ahead of Maiken Caspersen Falla (left) and Natalia Nepyaeva (right). (Photo: NordicFocus)

Because they were quickly on the road to the next venue, the American women were unavailable for phone calls and instead chose to send comments on their performance via email.

“Today was a great day,” wrote Diggins. “I was so proud of the entire team for staying positive, rebounding from yesterday and for keeping it super professional; nobody was mad, everyone just learned the lessons from the skis that day and then moved onwards. For me, it was important to just focus on what I can control and have confidence in my fitness that I knew was there.”

In response to a query on handling the pressure of offsetting her deficit in the overall standings, Diggins offered a process-oriented response.

“It was definitely crucial to my tour to make the finals, but instead of focusing on the outcome I focused on skiing every step of the way as well as I could!” 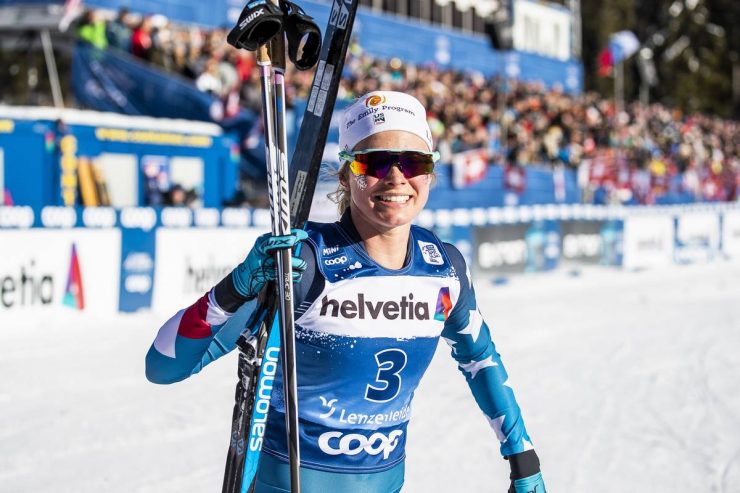 Jessie Diggins smiles as she walks away from a 4th place finish in Stage 2 of the 2019/2020 Tour de Ski. (Photo: NordicFocus)

“Now I’m looking forward to Toblach — a venue with many many positive memories for me!” she concluded.

Maubet Bjornsen also remarked on the positive energy taking vengeance on the first stage provided. She explained that with “impossibly slow skis”, it felt like a success to lose only 1:20 to the leaders. Maubet Bjornsen added that it was not just the athletes looking for a do-over in Stage 2.

“The tech team worked extra hard to find a solution and our entire team came back strong today! Although it was an imperfect start, positivity and constantly fighting are the two keys to this incredibly exciting event. I sometimes think the winners of the TDS are not the most physically fit people, but the most mentally tough.”

Like Diggins, she too is eager for a second go in the next round of racing in Stage 3 and hopes to continue whittling down her gap to the overall tour leaders.

“I look forward to the next stop in Toblach for another attempt at a 10 k skate, hopefully with an equal revenge as today. I have some precious seconds to try to win back still. One day at a time.”

She finished by saying that they are driving away from Lenzerheide “with some tired legs, but rejuvenated souls!” 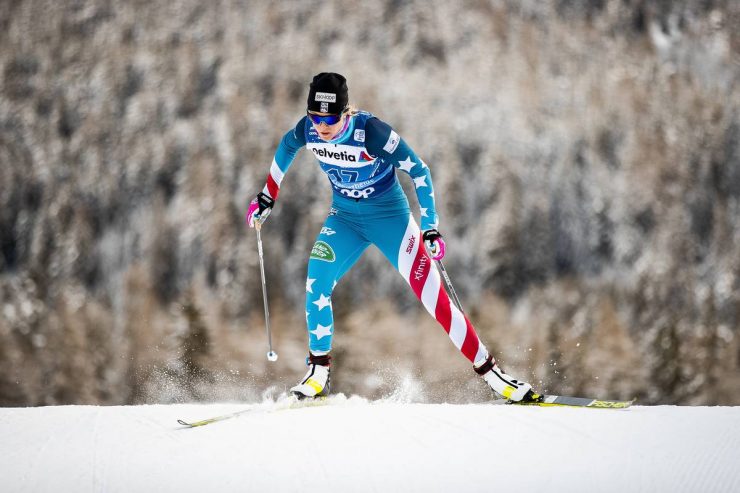 Noteworthy for the overall standings, tour leader after Stage 1 Therese Johaug qualified in 21st and raced in the speedy first heat with the eventual winner. She finished in fifth, just behind Diggins. Had she raced in any other round, the distance phenom, who is not known for her sprinting, would have advanced as well. Her result put her in 23rd for the day, earning six bonus seconds.

Though she slid back to third in the overall rankings, this result maintained her threat for the overall tour victory. Johaug is only five seconds out of first place heading into three distance stages where she will have the opportunity to create a gap over the field before the Stage 6 sprint. In the fifth stage, a mass start classic in Val di Fiemme, Italy, she will also have the opportunity to earn bonus seconds at various checkpoints, giving her further insurance on the following sprint day. 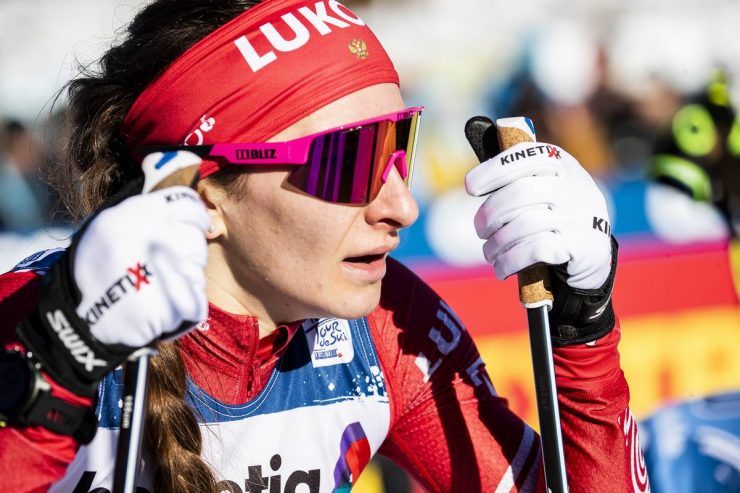 After a third place finish in Stage 2, Natalia Nepryaeva takes over the overall leader bib in the 2019/2020 Tour de Ski. (Photo: NordicFocus)

Now wearing the leader’s bib, Nepryeava’s sprint podium moved her into the lead with a cumulative time of 31:18. She finished sixth in the first stage. Demonstrating her potential in the competition, Nepryaeva dueled with Norway’s Ingvild Flugstad Østberg throughout the 2018/2019 tour to finish second overall. The Russian won the first distance stage and took second in the final four stages.

Lampic, who finished 50 seconds behind Johaug for 20th on Saturday’s distance race, moved into third overall, one second behind Nepyraeva. Last year, she finished 22nd in the tour. 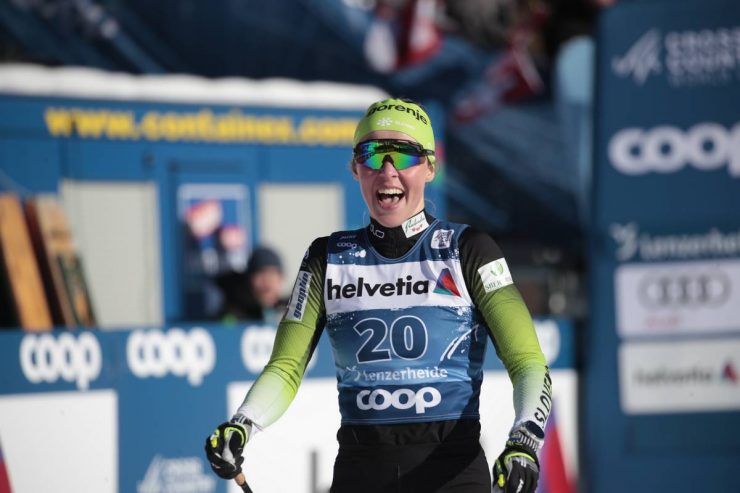 Posting consistent results in the first two stages, Tiril Udnes Weng’s 7th in Stage 1 and 6th in the sprint put her in fifth overall, followed by her cousin Heidi Weng who was second in the first stage but 32nd in qualification leaving her out of the rounds.

Cutting their time back in half, Diggins sits in 11th place, 39 seconds behind Nepryaeva, followed by Maubet Bjornsen in 12th (+41). The overall podium continues to be up for grabs.