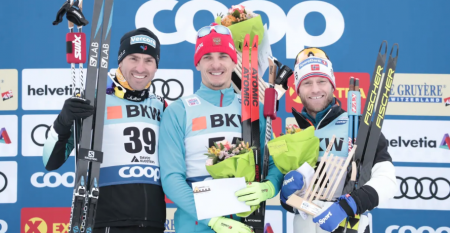 It seems there is something in the water in Davos for Maurice Manificat, as he earned his sixth podium there today in the 15-kilometer individual skate event, demonstrating his continued prowess on the course. It was the first race start of the season for the Frenchman, but he quickly made it clear that he was on form to be a contender for the win. Manificat was never lower than third place as he clocked in on the course’s checkpoints. He held the lead going into the final 5 k lap at seven seconds ahead of Evgeniy Belov of Russia who held the second position. 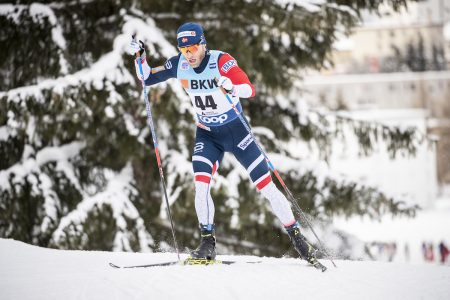 However, Belov was ready to chase Manificat, skiing powerfully to the top of the 3.3 k climb, closing the gap to within a second. Belov flew through the descent and charged to the finish in a time of 35:52.5 minutes, edging Manificat by 0.9 seconds and earning his first ever individual World Cup victory. He has not earned a podium finish since the 15 k skate in Canmore, Canada in 2016. Martin Johnsrud Sundby of Norway took third (+4.5) .

“I would like to thank my team for the support and the great skis,” Belov told the International Ski Federation (FIS). “In the first lap I did not feel so great but when my team told me that I could go for the podium, I tried to speed up from the second lap. In the last round, I really pushed myself hard but it was totally worth it and I am happy with my result.”

It was an incredibly close race with only 10.6 seconds separating first from fifth place. Russia’s Denis Spitsov was fourth (+7.5), and Norway’s Chris André Jespersen fifth (+10.6). 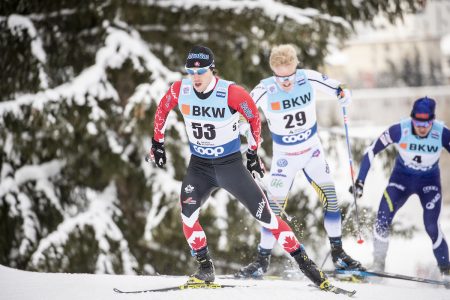 Andy Shields (CAN) on the course in the15-kilometer men’s race in Davos, Switzerland. (Photo: Fischer/Nordic Focus)

The Americans were without their top distance skier, Erik Bjornsen, who left Period 1 after the races in Beitostølen, in order to complete a longer training block in France prior to the upcoming Tour de Ski.

The relatively lackluster finishes may be attributable to the accumulated fatigue of the back to back weekend races on the road, coupled with the challenge of racing in Davos, which sits at roughly 5,’100 feet.

“It was definitely a tougher day out there for the men than it was for the women,” head coach Matt Whitcomb told FasterSkier. “For our team today, we were seeing a bit of end of Period 1 fatigue, certainly a couple of our sprinters who went yesterday, Simi and Kevin, were feeling tired from that effort, and we just simply didn’t really put together any great races out there today.

“It’s a highly competitive environment to be racing on the World Cup,” Whitcomb continued. “And to be anything but very close to perfect really shows up on the result list. But not only that, Davos, racing at altitude, it goes one way or the other, quite dramatically. There’s not a lot of middle ground there, and we unfortunately didn’t have anyone break through the territory they were hoping to see today, so [we’re] leaving unsatisfied, but not discouraged.”

As the Tour de Ski does not begin until December 29th, the team has the chance to focus on their training without the stress of travel, racing, and recovery.  As Martin and Norris have only been selected to race Period 1, they will be flying back to the States to prepare for U.S. Nationals.

“We are really looking forward to, after five weeks on the road, a solid training block,” Whitcomb told FasterSkier of the team’s plan. “I know the athletes are looking forward to a weekend without racing. We’ll move into some volume to build up some stability that we’ll tap into later in the season. For most of these athletes they’re [staying] in areas where the snow is quite good, so I think you’re going to see a lot of easy distance training and some good higher volume for our team.”