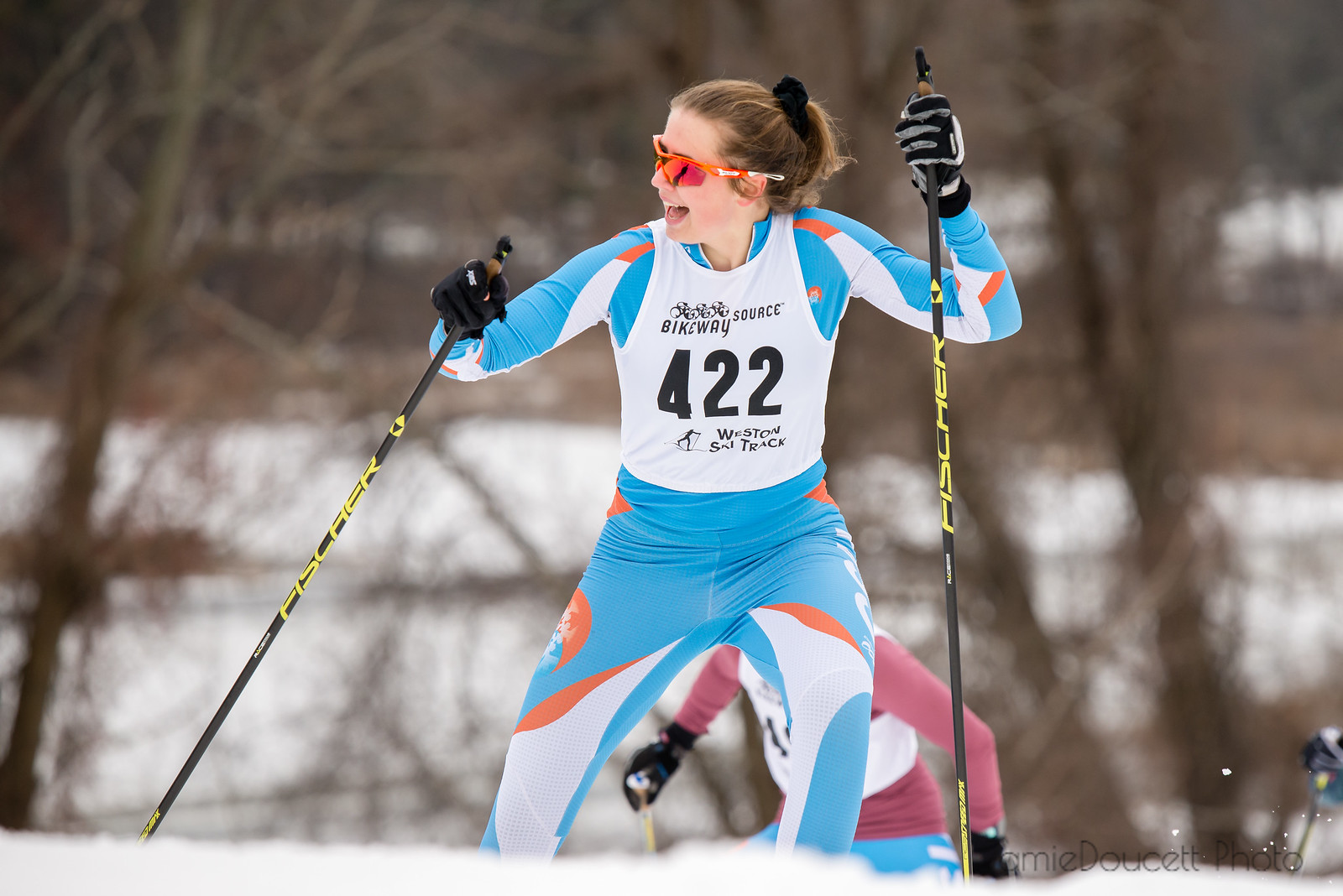 A CSU skier during the Race for Snow at the Leo J Martin Ski Track. (Photo: Jamie Doucett)

This is part two of a series featuring urban based cross-country clubs and how they make it work in the concrete jungle. You can read part one here.

On the homepage of the Cambridge Sports Union (CSU) is an apt quote from tennis champion Arthur Ashe: “Start where you are, use what you have, do what you can.” The quote from Ashe came about as he described how to deal with challenges. And it’s the perfect departure point to describe CSU and its commitment to junior skiing in the Boston metroplex.

The CSU Junior Noridc Ski Team, serving athletes aged 14-18, does have a geographic center at the Leo. J. Martin Ski Track in Weston, Mass. Radiating out from those ski tracks, which are simply ski trails groomed out over a golf course, the CSU club extends its tentacles and embraces the words of Ashe.

Looking at a map of the greater Boston area, and maybe knowing what it’s like to drive in and around the region (it’s the first and only place I’ve ever seen drivers use the breakdown lane as a passing lane), you start to understand one challenge to operating a ski club in Boston.

“The traffic around Boston is absolutely atrocious — especially around rush hour which is when usually have practice,” said Alex Jospe former head coach of the CSU junior team. (We spoke with Jospe before she took a role with the Stratton Mountain School as a ski coach in September.)

Screenshot depicting the location of the Weston Ski Tracks on a Google Map.

According to Jospe, CSU has made it work in the long run by adhering to some basic tenets like being flexible. Traditionally, CSU schedules practices on Tuesday and Wednesday at two different locations during the dryland season. The two practices are similar in design but serve different suburbs around Boston. In the tricky commuting environment that is Boston, CSU does not offer transport to practices.

“In my other life I do GIS analysis and so every year I take all the addresses of the kids who signed up and make a density map and see where the major families are living,” Jospe said. “Then I try to centralize practice. Hands-down our biggest challenge is commuting.”

The other practice sessions offer one location in a more centralized spot to accommodate different travel times and specificity of the day’s workout objective. They find locales for safe running, bounding, and rollerkskiing. During the winter months, CSU is able to focus training out of the Weston Ski Tracks which offers snowmaking and artificial lighting. The snow piece of the equation and having reliable snow just outside the city helps make the program tick.

The Weston Ski Tracks are open until 9P on weeknights and is an on-snow lifeline for CSU. The ski venue is owned and operated by the state of Massachusetts and operates in concert with the non-profit Friends of Leo J. Martin Skiing (FOLJMS) to ensure the tracks meet the needs of the various community stakeholders. Jospe noted that the state and FOLJMS agreed to allow CSU to build what is called Mt. FOLJMS – a modified six foot higher “mountain” than would otherwise be on offer at the ski tracks. Beyond on-snow training in Weston, the club also offers a chance to ski at other New England ski areas one day per winter weekend.

CSU is not limited in its capacity to cater to committed athletes. The community makes it work. And although not mandatory, CSU brings skiers to Eastern Cup races that serve as Junior National qualifiers. CSU’s athletes also have a non-CSU social and training outlet. According to Jospe, 50 percent of CSU skiers also race for their local high school team.

“This gives kids more resources and more teammates and we have a good relationship with all the coaches,” said Jospe. “They recognize this is a win win for everybody.” 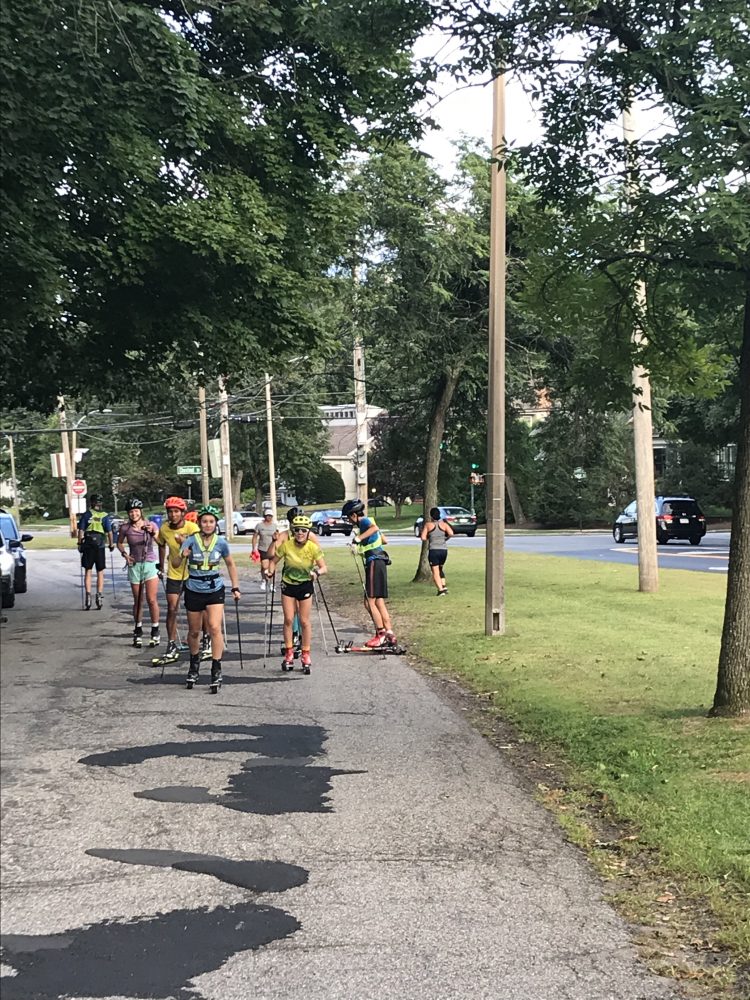 “That fee gives you access to 11 months of high level coaching and an individual coach assigned to you that we call training log coaches. Training log coaches do your season meeting with you and check in on a weekly basis, monitor training, and offer suggestions,” said Jospe. “They also work with you to make sure that your training plan fits your life because a lot of these athletes have many interests outside skiing. They ski at a very high level but they also are members of school clubs, taking AP classes and doing extracurricular stuff and volunteering at places and sometimes taking college classes and there are tutoring lessons and there are music lessons. There is a lot going on.”

As is the norm elsewhere, travel, waxing, and equipment costs are add ons. Yet CSU does offer confidential scholarships for athletes in need.

Last season, CSU hired a part-time assistant coach, but the issue still remains that Boston is an expensive place to live. Jospe said this year was the first that she could recall that fees for skiers jumped considerably in part to offest the cost of a coach’s salary. As CSU navigates what a sustainable model looks like, it remains primarily volunteer. As a result, parents and guardians are required to volunteer in some capacity.

Some parents help with food on trips, others staff an assembly line of waxers and ski testers at races.

As a New England club, CSU sits in a hot bed of ski academies focused on priming athletes for the race season. CSU, as an urban based program racing against programs with easier access to snow and training venues, can compete.

If you can tease through the hustle and bustle of I-90, I-93, and I-95, and the paved over cattle paths/roads of Boston’s suburbs, lining up against the powerhouse house programs in New England might seem like a small hurdle.

“Start where you are, use what you have, do what you can.” Arthur Ashe had it right.