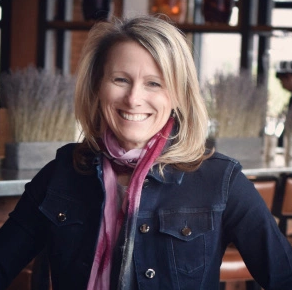 Dr. Nicole LaVoi gave a keynote presentation at the U.S. Ski & Snowboard National Cross Country Coaches Symposium. LaVoi is the co-director of the Tucker Center at the University of Minnesota in Minneapolis. (Photo: Screenshot nmlavoi.com)

On the last weekend of September, U.S. Ski & Snowboard held the annual National Cross Country Coaches Symposium in Park City, UT. This year’s event included a keynote presentation from Nicole LaVoi Ph.D., co-director of the Tucker Center at the University of Minnesota in Minneapolis. Dr. LaVoi is a professor of sport psychology and sociology at UMN and leads research in “the structural and personal barriers experienced by female coaches, relational qualities of the coach-athlete relationship, the effect of parent and coach ‘background anger’ behaviors on youth athletes, the physical activity of underserved girls, and media representations of girls and women in sport.” She also serves on the board of directors for WeCoach, an organization promoting women coaches at all levels across all disciplines.

LaVoi first presentation was titled “Developing Physically Active Girls”, followed by her keynote presentation, “Leadership: The Importance of Women in Coaching”. [A livestream of the symposium can be purchased here.]

She explained that despite a steady rise in female participation in sport since Title IV was passed in 1974, gender equity has declined or remained stagnant. This is in contrast to the percentage of women in leadership positions in other sectors of the workforce which has been on the rise.

“The lack of women in skiing leadership is not the problem; it is a symptom of the problem,” said LaVoi in the presentation.

During her presentation, LaVoi explained the multifaceted explanation of the precipitous decline of women in coaching and offered suggestions to begin steering the trend in a positive direction. Namely, that the climate in sport has not made women “feel safe, valued, or supported.”

“Both anecdotal evidence and empirical data illuminate the fact that some women are losing their jobs due to persistent and systemic sexism and gender discrimination, unfair double standards, stereotypes, and both explicit and unconscious gender bias in hiring and evaluation processes. In short, sport historically has been, and continues to be, a male-dominated, male-centered and male-led occupational context. While male domination in the workplace is not unique to college athletics, as a whole, college athletics has been slower than other industries to embrace the value of diversity and inclusion.”

LaVoi also used her research to challenge narratives about gender equity in hiring and discussed the barriers women experience and the intersectional factors by which they are caused (see model). Some of these factors include stereotypes, gender and maternal bias, limited upward mobility, and a lack of women’s network in coaching. 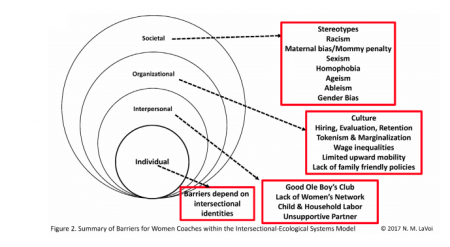 Women Ski Coaches Association (WSCA) leader Maria Stuber expressed the value of the research conducted by LaVoi and the Tucker Center in allowing the problem to be discussed across genders without interference from one’s personal experience or biases.

“Having data to back the conversation helps take the emotions out of this topic and makes it an easier conversation to have,” said Stuber, “It’s less of a controversy. Once this is no longer just an opinion, we can stop being defensive and start focusing on solutions. The data allows us to be positive, take action, and get things done.”

LaVoi explained that one of the questions she hears most commonly is “Why do women coaches matter?”

In her 2016 publication titled Women in Sports Coaching, LaVoi addressed this question in depth. Here is an excerpt:

“Sport is one of the most visible and powerful social institutions in the world. Individuals who are seen and known in the world of sports, like coaches, communicate who and what is relevant and valued (and who is not), and a majority of the time in every country in the world, those coaches are men. There are many empirically based reasons why women coaches matter.”

Some other reasons cited by LaVoi  include the importance of having gender diversity in role models to challenge archaic stereotypes about women in leadership roles, the importance of same-sex role models for young women and girls, and that boys experiencing women as competent leaders increases the likelihood that they will respect women and see them as equal colleagues and partners.

She also explained that a lack of women is detrimental to the ecosystem of sport coaching.

“When women are the minority in the system, they face a lot of psycho, social, and occupational outcomes.”

These outcomes include decreased job satisfaction, pressure to perform or conform, stronger intention to leave, an increased likelihood of opting for a lesser role, and burnout. On the flip side, the presence of women in leadership roles helps empower other women to strive for a similar outcome and having same-sex peers can also improve the experience one has in a given system.

“When you see women being successful, it inspires people. ‘Oh, I could do that. That seems cool, she seems cool, I want to do that.’ And in they come. It’s the same thing with women in positions of leadership.”

LaVoi likened this to Jessie Diggins winning an Olympic Gold Medal inspiring others to try cross country skiing or set a lofty goal.

She added that the visibility of female head coaches also helps female athletes see coaching as a viable career path, increasing the likelihood of becoming coaches themselves.

“Women and girls coached by women are more likely to go into coaching, so it’s a cycle. And women who are coached by women are safer. All of this stuff with SafeSport right now and coach abuse, 99.5% of all sexual abuse in sport happens because of male coaches. We don’t like to talk about that because it’s uncomfortable but that data is real clear on this.”

LaVoi also offered suggestions on how programs at any level can work toward improving gender equity in their coaching staff. Some suggestions include committing to having a female coach on every level team, providing membership for female coaches to join the WSCA, and paying for female coaches to attend professional development activities. If coaching positions are available and women are not applying, consider recruiting women who would do well in the position.

In 2017, the Tucker Center launched the She Can Coach campaign which challenges coaches to invite female athletes to consider a career in coaching and expressing belief that those athletes would make great coaches. LaVoi explained the importance of recruiting talented coaches and inviting women into the field to move the needle forward. She went on to explain how this relates to creating equity rather than equality, as women in the coaching field may need additional resources or support in order to have the same professional experience as their male counterparts. 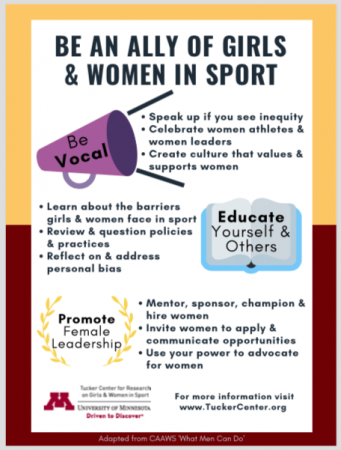 Men are invited to be part of the solution to gender inequity in sports coaching. (Graphic courtesy of the Women Ski Coaches Association)

Throughout the presentation, LaVoi emphasized that the “numerical male dominance in coaching” is not a women versus men problem —  she addressed how male allies can be a part of the solution. Some of her suggestions were simple, like encouraging female athletes who would make great coaches to consider it, displaying images of women coaches around the clubhouse, reflecting on their own conscious and subconscious biases, and celebrating the existing women coaches in the program. She also suggested that men refuse to serve on all-male panels or faculties to encourage the recruitment of a diversity of perspectives.

She left the male attendees with the challenge to identify where on the spectrum of allies they fell and she asked all participants to identify and commit to one thing they can do to change the system. [Read a call to action from Pete Vordenberg here].

For a deeper look into LaVoi’s research and recommendations, see the Tucker Center report titled “Athletic Administration Best Practices of Recruitment, Hiring and Retention of Women Collegiate Coaches.” Though focussed on the college system, the insight can be extrapolated to benefit club programs. You can also watch LaVoi’s presentation at the Tucker Center’s 2018 Women’s Coaching Symposium here.