This Wednesday Workout comes to us from Matt Boobar who has been coaching the Stratton Mountain School (SMS) nordic team since 2007. In the fall, he also works with the cross country running and mountain bike programs, and leads cycling in the spring. Boobar has a B.S. in exercise science and has earned a USSA Level 200 certification. He has been the head coach of the New England Junior National Team eight times and was recognized as the NENSA coach of the year in 2009. The SMS Nordic and the elite SMST2 teams were selected by USSA as 2019 Cross Country Club of the Year; it is the clubs fourth time earning this recognition in the last six years. 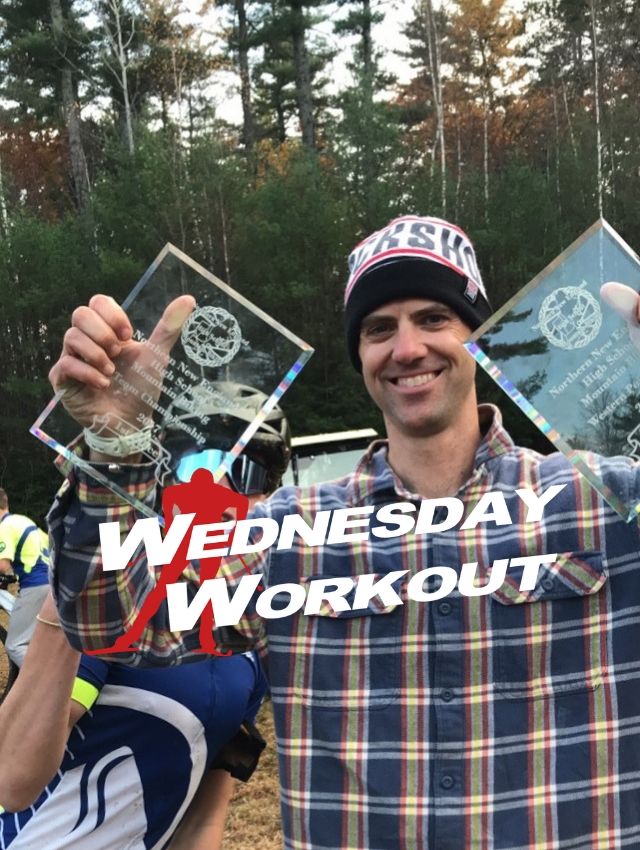 If you have been so lucky as to grow up and go to school in a place where nordic skiing is possible, the scenario of fall cross country running followed by nordic skiing in the winter is likely one that you are familiar with. Looking at a Venn diagram of the teams, the union might not be significantly different than the intersection. With the growth of youth mountain bike and cycling programs creating a different opportunity for adolescents to become endurance junkies, the running-skiing symbiosis might be less prominent than it once was, nevertheless, it remains the approach of many U18 athletes nationwide.

In cross country running, there is a saying, “autumn holds no secrets of how summer was spent.” Similarly, in the ski world, you may hear, “skiers are built in the summer,” which leads to the challenge many athletes face when they head into summer with goals in both sports.

Depending on the long term goals of the athlete, at some point, it is wise to decide which sport holds the priority. This way, an athlete can fall into one of two camps: the runner who also wants to see improvement in their ski racing or the skier who wants to improve their running (and remain injury free through the fall). In Boobar’s mind, the time when this decision is made is unique to the individual making it.

“It has to be personally goal dependent on the athlete,” he said in a call. “I think helping to create awareness that, ‘I just can’t run and do my eight-week cycle [for cross country running] which gets me peaked on November 1st, and then jump in November 15th with my nordic team and build up for an eight or ten-week cycle for that’. I think they have to think, whether their goal is running or skiing, they need to definitely think year-round training.” 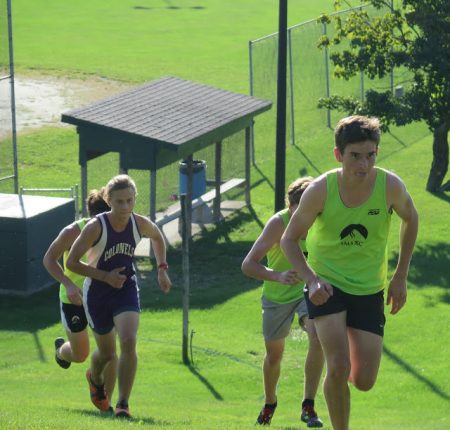 Members of the SMS cross country team charge up a hill during a fall race. (Courtesy photo)

First, let’s look at the skier who also wants to perform well in fall cross country races. This scenario is one Boobar is most familiar with, as the athletes that attend Stratton Mountain School are already committed to making ski sports their priority. Though his athletes compete in the local Vermont high school races and state championships, they do not train full time for running the way one might on a more traditional team. Athletes that train year-round with a club program, but also participate in their school’s cross country team may relate to and benefit from this approach.

“We use markers like some of the championship races in the fall as goal setting tools,” Boobar explained. “So for the state meet for cross country running, we’ll attempt a version of a taper and peak format and just see how their energy is for that event… We try to use that going forward in how they react to a certain type of taper and peak.”

While the hard efforts are beneficial, the races are not prioritized the way nordic races would be.

“The issue we run into with trying to run fast or even bike really fast is that we don’t really want to be at a peak level at the end of October,” said Boobar. “We want to be in the middle or more of a base building, pretty high volume, just pretty solid heavy training load.”

The challenge he faces in recommending summer plans for his athletes and training with them throughout the fall is prescribing them enough running specific work that they are able to hold their own in races without sustaining any injuries, while the primary focus of training remains more ski specific.

“What we run into nowadays with the running is a lot of soft tissue injuries: shin splints, Achilles tendinitis, sore knees,” Boobar noted. “Some kind of result of how kids are growing up possibly, they’re not doing as much crazy free play in the woods – but it’s definitely something that we’ve noticed, so we have to train our kids to build up some of that running durability. And I don’t think it’s enough to just be like, ‘Oh, we’re going to go trail running on the Appalachian Trail,’ I think they need to do some actual running repeats on a fairly hard surface and incrementally increase that so they can build up that durability and leg speed turnover.”

He added that for most skiers, running is used as a training modality on long endurance days possibly with poles in the mountains, so the body gets used to a much slower cadence than what is needed for a cross country race. While this cadence isn’t necessary to ski fast in the winter, it can certainly inhibit performance in a 5k run. By including some higher speed running, perhaps 400 meter or 1-kilometer repeats, Boobar expects to see a decrease in the frequency of running related injuries and an improvement in performance in his athletes at the championship benchmark races. They also include drills regularly to help promote proper running form. 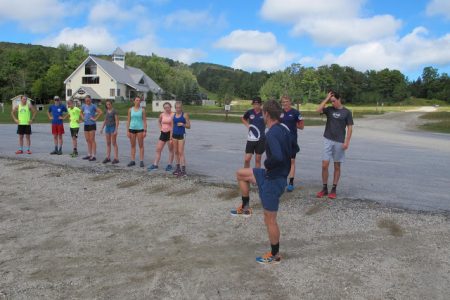 What about the other camp? For athletes whose primary focus is on cross country running but are also interested in seeing improvements in their skiing, Boobar offered a few simple recommendations.

Because of the high-impact nature of running, he also noted the difference in training hours (though most runners measure in miles). 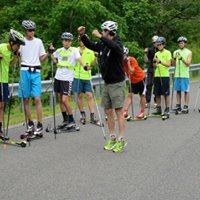 “Our kids [at SMS] are training 8-15 hours a week in the fall, and I would guess most public high school running teams or even a prep school, they’re training under ten hours a week and that might be a huge week for them running. So I would look at them and say they need to add a longer day.”

For the double pole rollerski, he recommends 1.5 hours easy, potentially following a run. This provides the athlete with the aerobic benefit of a long session without adding any load to their already fatigued legs. A 45-minute skate with agility focus helps with balance and coordination and works the musculature involved with lateral movement, which is not as recruited as much in cross country running.

At the end of the academic year, Boobar will be advancing to the role of director of the SMS nordic program following the retirement of Sverre Caldwell, who led the program for 39 years. While it might seem as though he is stepping into shoes that are tough to fill, Boobar feels confident that the transition will happen seamlessly.

“Luckily, I’ve worked here with him for ten years,” said Boobar. “So following along with his coaching style and philosophy will be pretty easy. We both have a similar philosophy with how we like to coach anyway, which is to try to provide an environment for kids to take ownership of their own training and goals. So not so much tell them what to do, but having all the pieces there for them to figure out what they need to do.”